During my travels through Eastern Europe I have learned two things about World War II. First, without the many victory parks, museums, patriot songs and annual celebrations, the cities and cultural landscape would be much poorer (see my visit to Moscow on Victory Day). Second, don’t let yourself be impressed by all the monuments, tanks, costumes and flags. What would – in the best case – be perceived as bad taste in Germany can be perfectly “normal” in Eastern Europe.

Keeping this in mind I set out for the “Night of the Museum” at the Museum of the Great Patriotic War in Minsk (Музейгісторыі Вялікай Айчыннай Вайны) on May 19, 2018. The museum was founded shortly after the liberation of Minsk, making it the only World War II museum which opened before the Second World War had even ended. In 1966, it moved to the present building at the edge of Victory Park (Парк Перамогі). 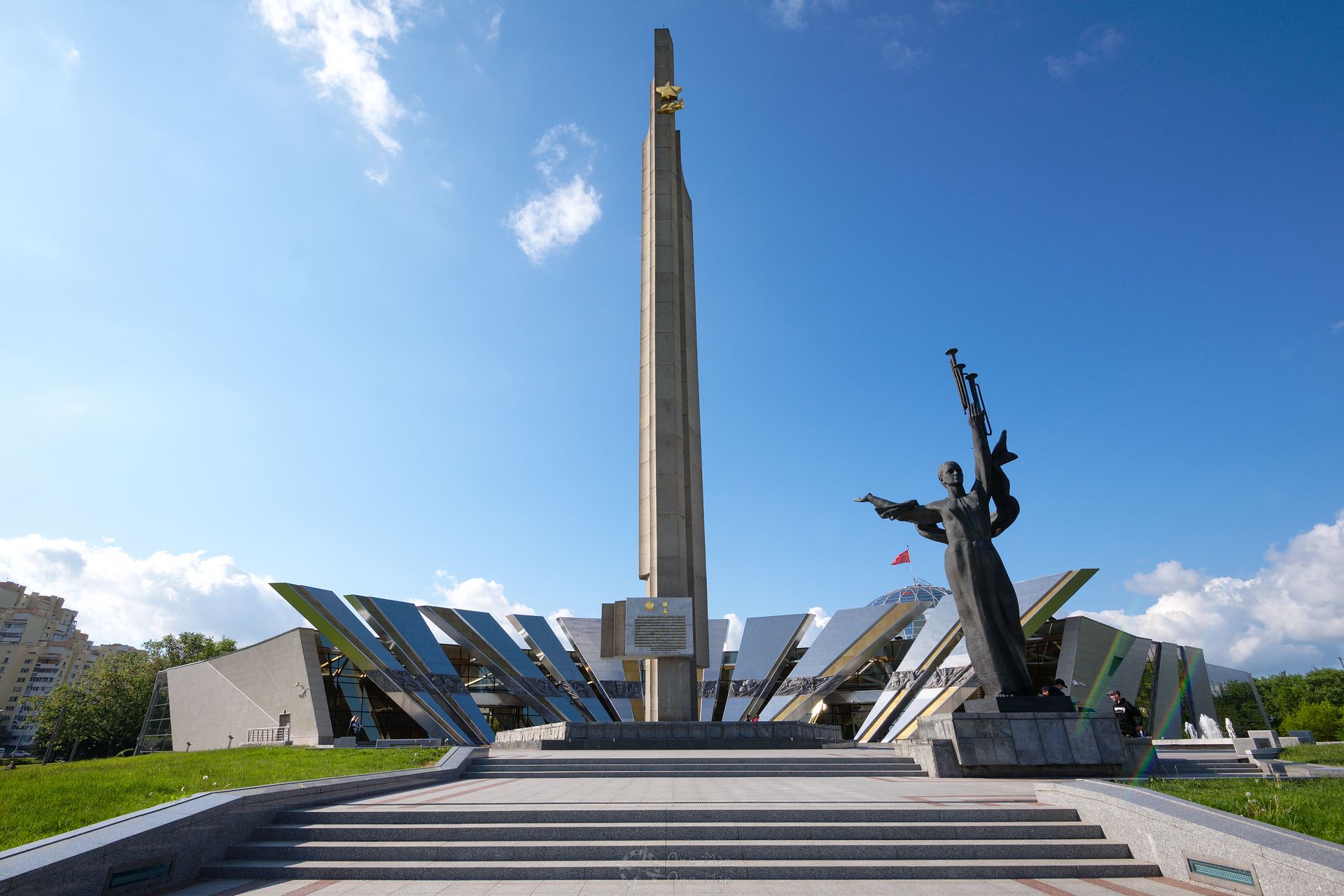 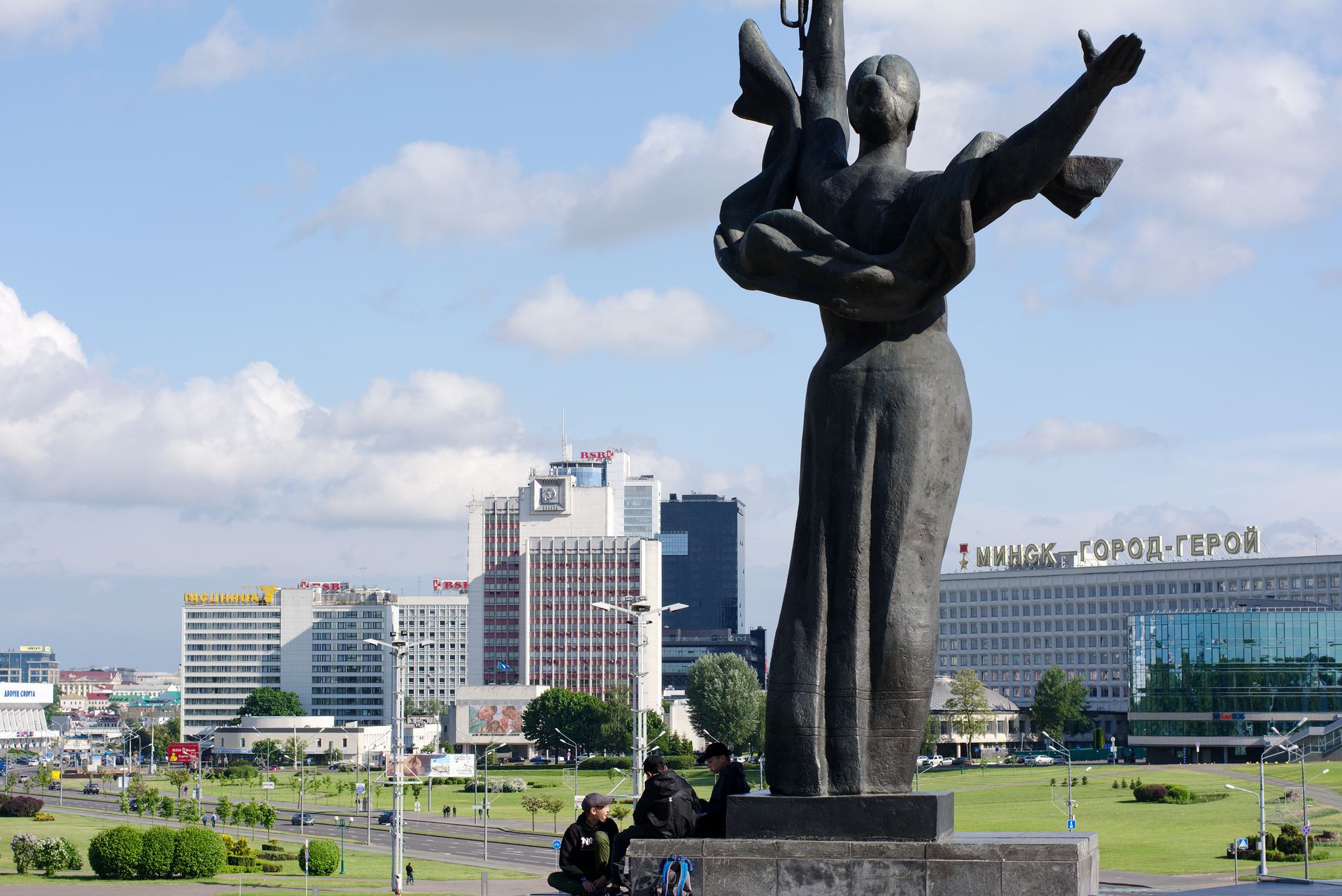 You could hardly make this even more patriotic: the building is situated on a hill, the large stele is dedicated to the Hero City of Minsk, the female statue with the trumpet is named “The motherland is calling” (Радзіма-маці). A total of 12 cities were awarded the title of “Hero City” by the Soviet Union to honor the “mass heroism of their defenders in the Great Patriotic War”. Large neon letters on the building opposite of the museum also remind visitors about this once more.

The ten “rays” behind the stele show various, typically Soviet reliefs. Some reminded me of similar works of art in some stops of the Moscow Metro. 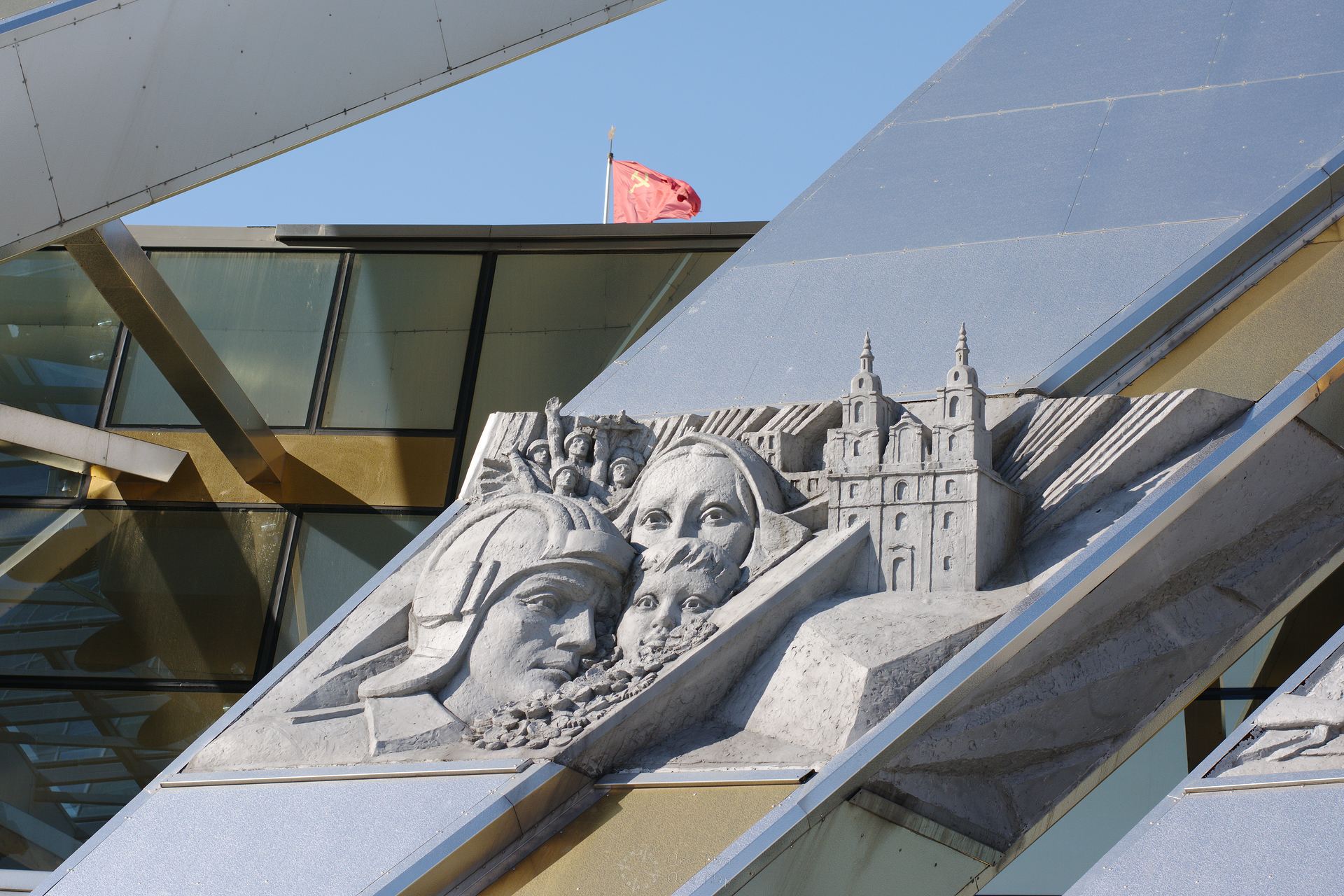 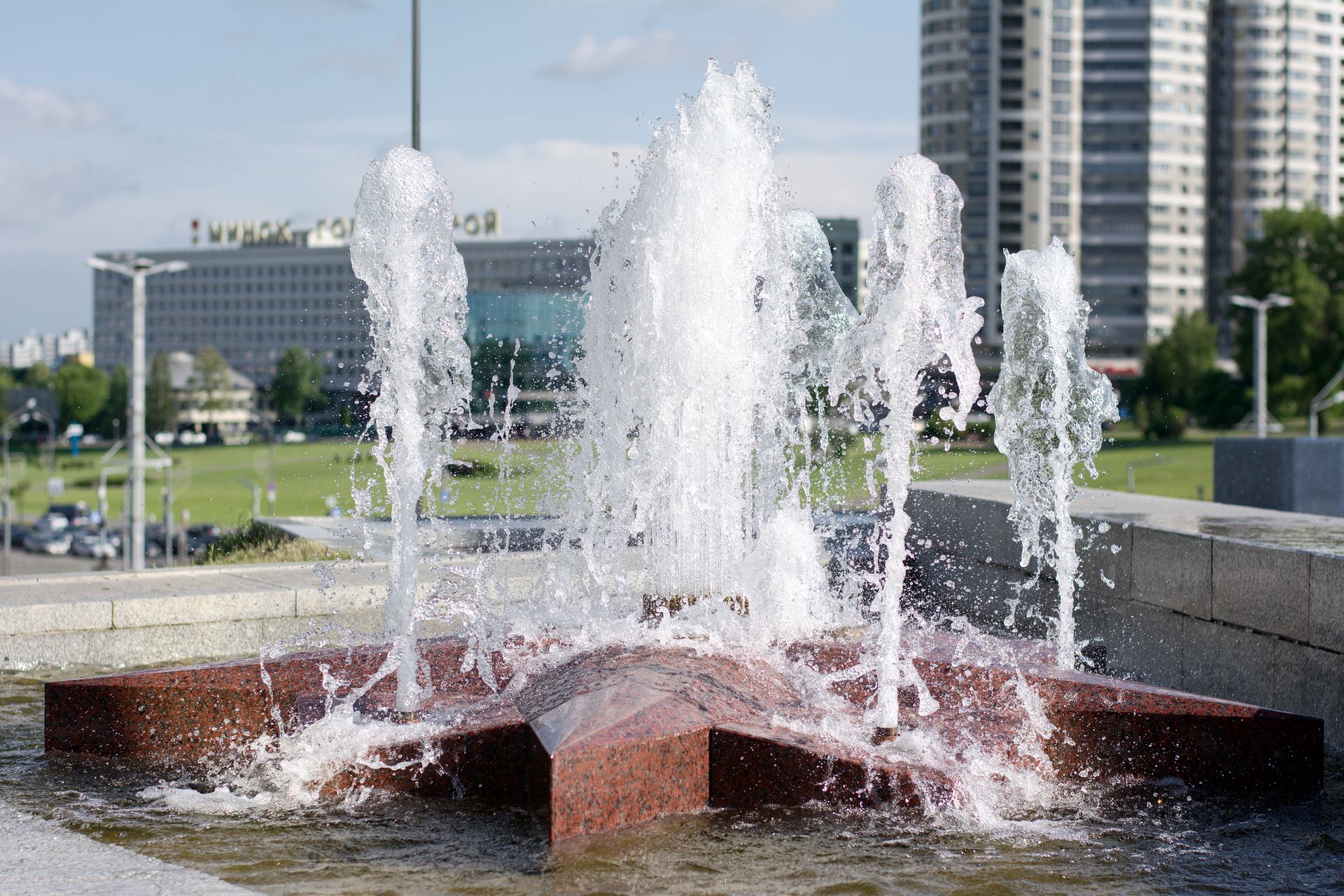 The collection currently contains more than 140,000 exhibits, of which very few can be exhibited. The exhibition rooms were surprisingly professional and definitely did not have to hide from other international counterparts. Most of the exhibits were labeled in Belarusian, Russian and English – a rarity in this region. The curators also did a good job focusing more on historically correct information than blatant blame. 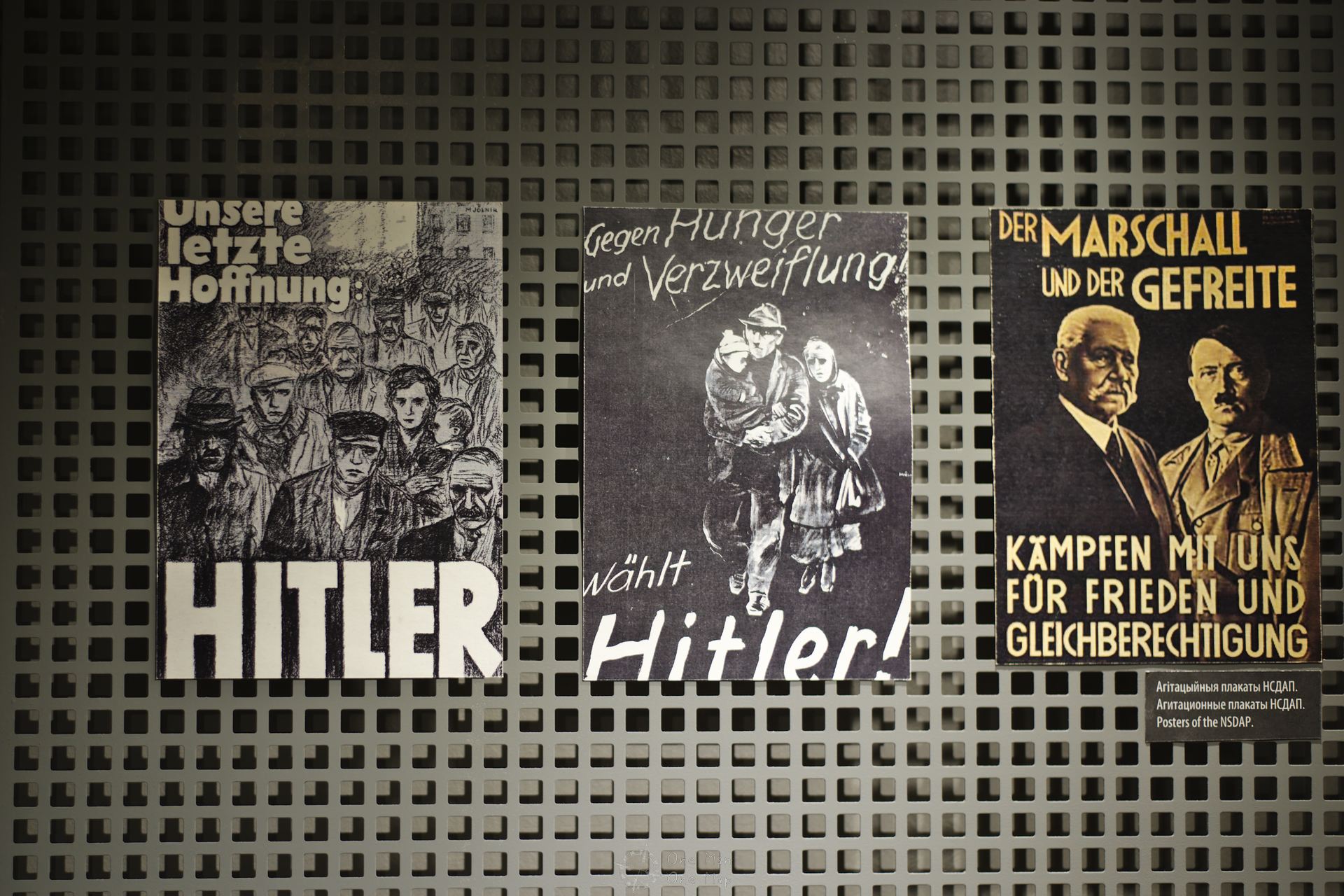 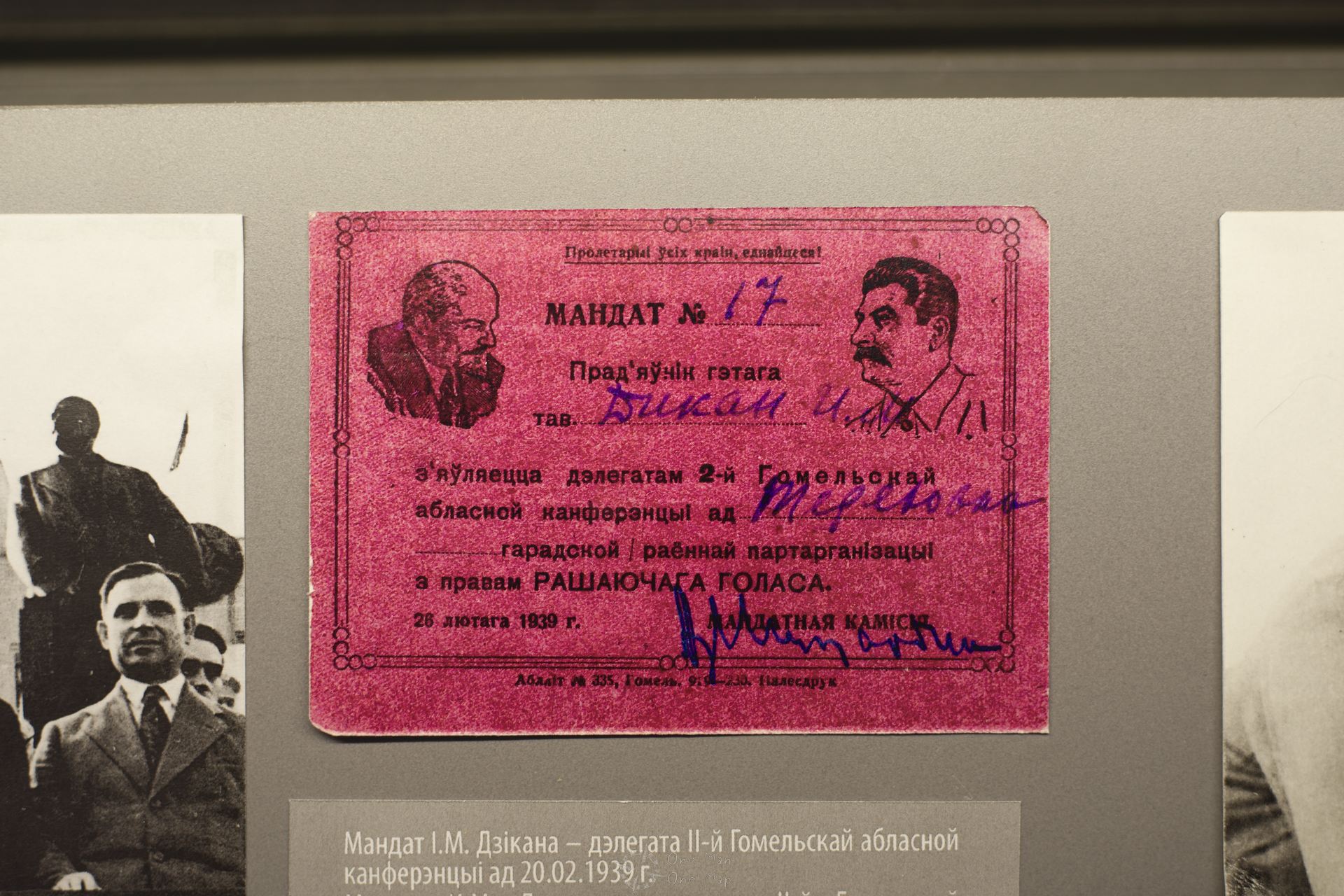 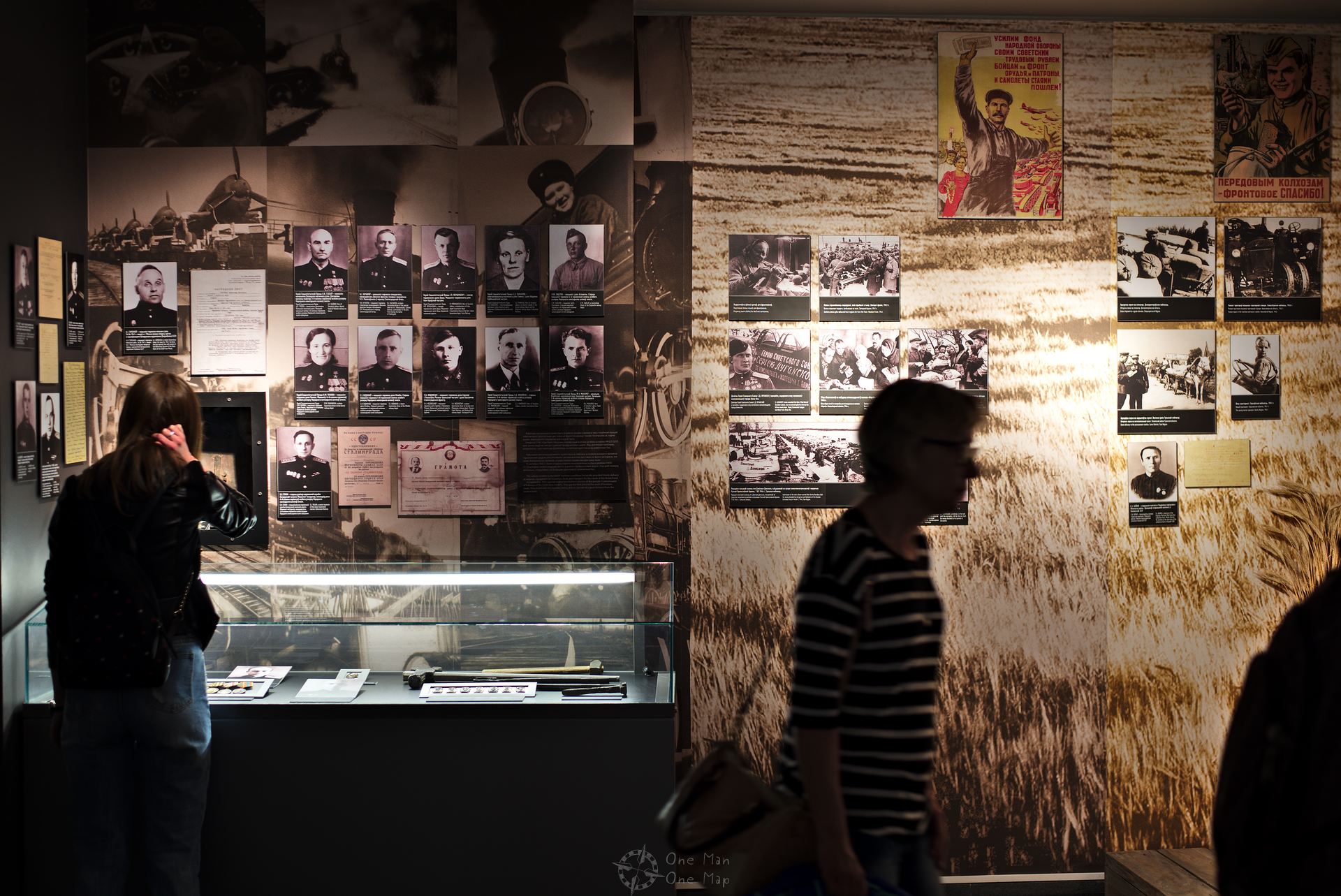 The extensive dioramas and the nicely lit rooms were particularly impressive. The decoration of the interiors must have cost a lot of time and money. 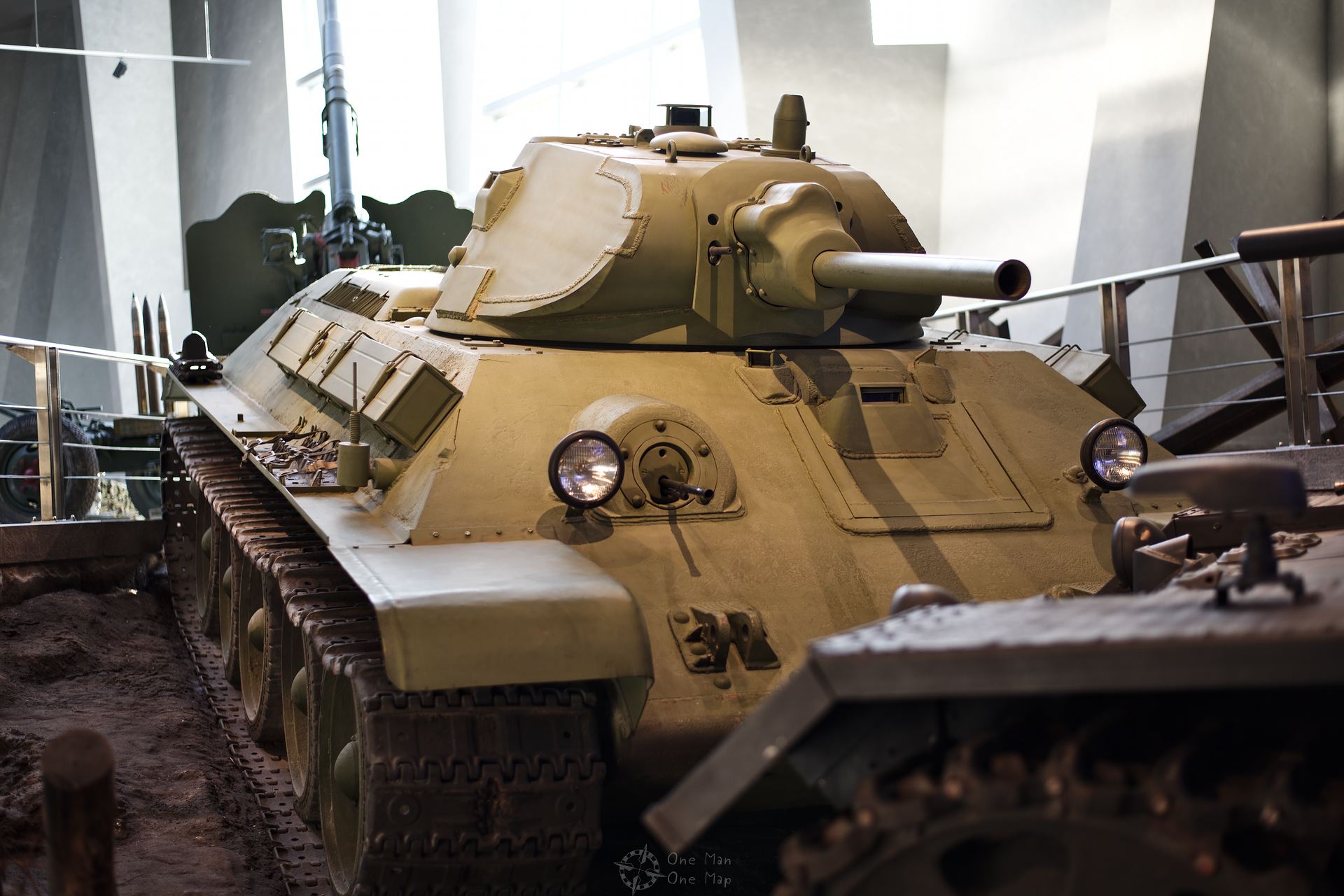 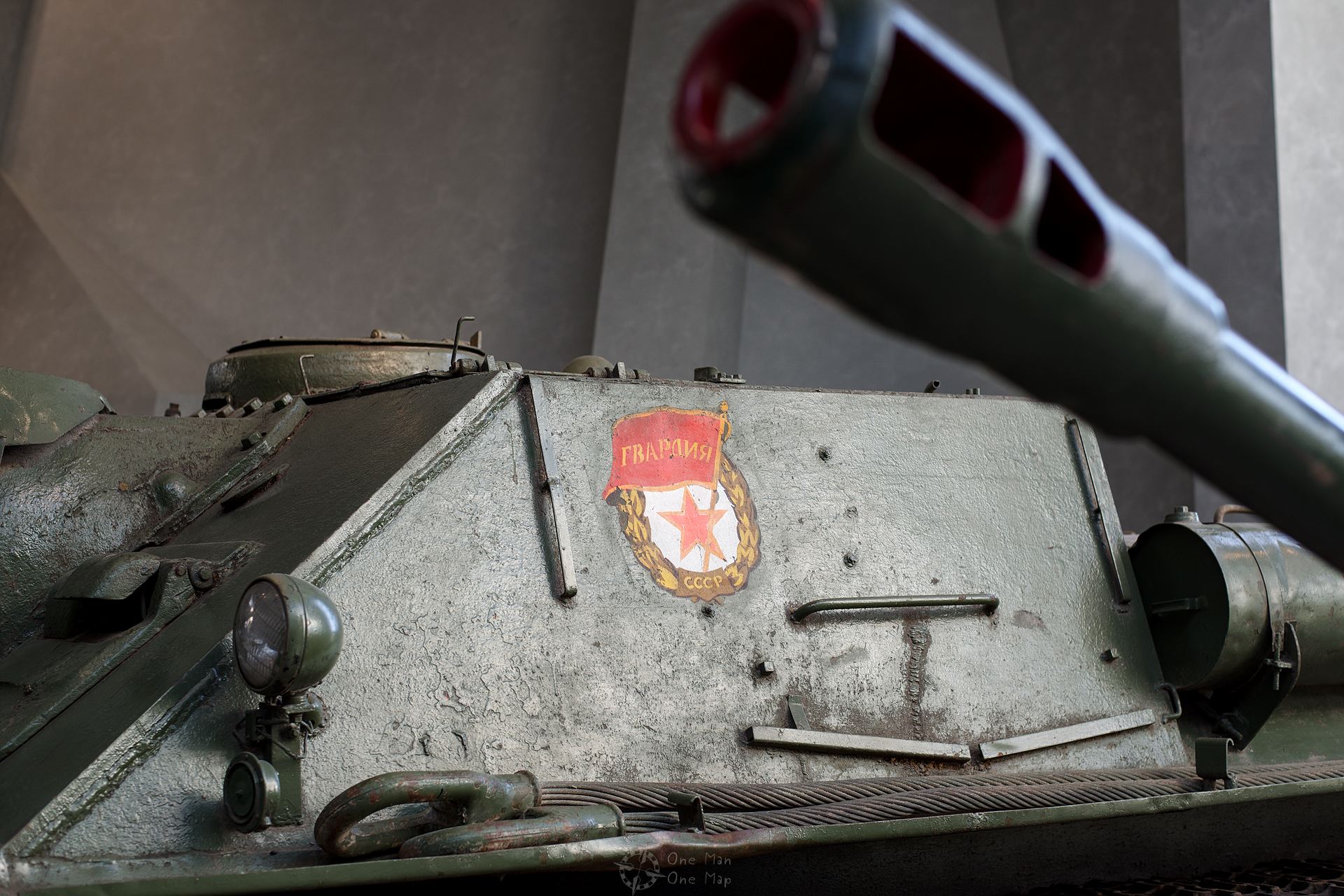 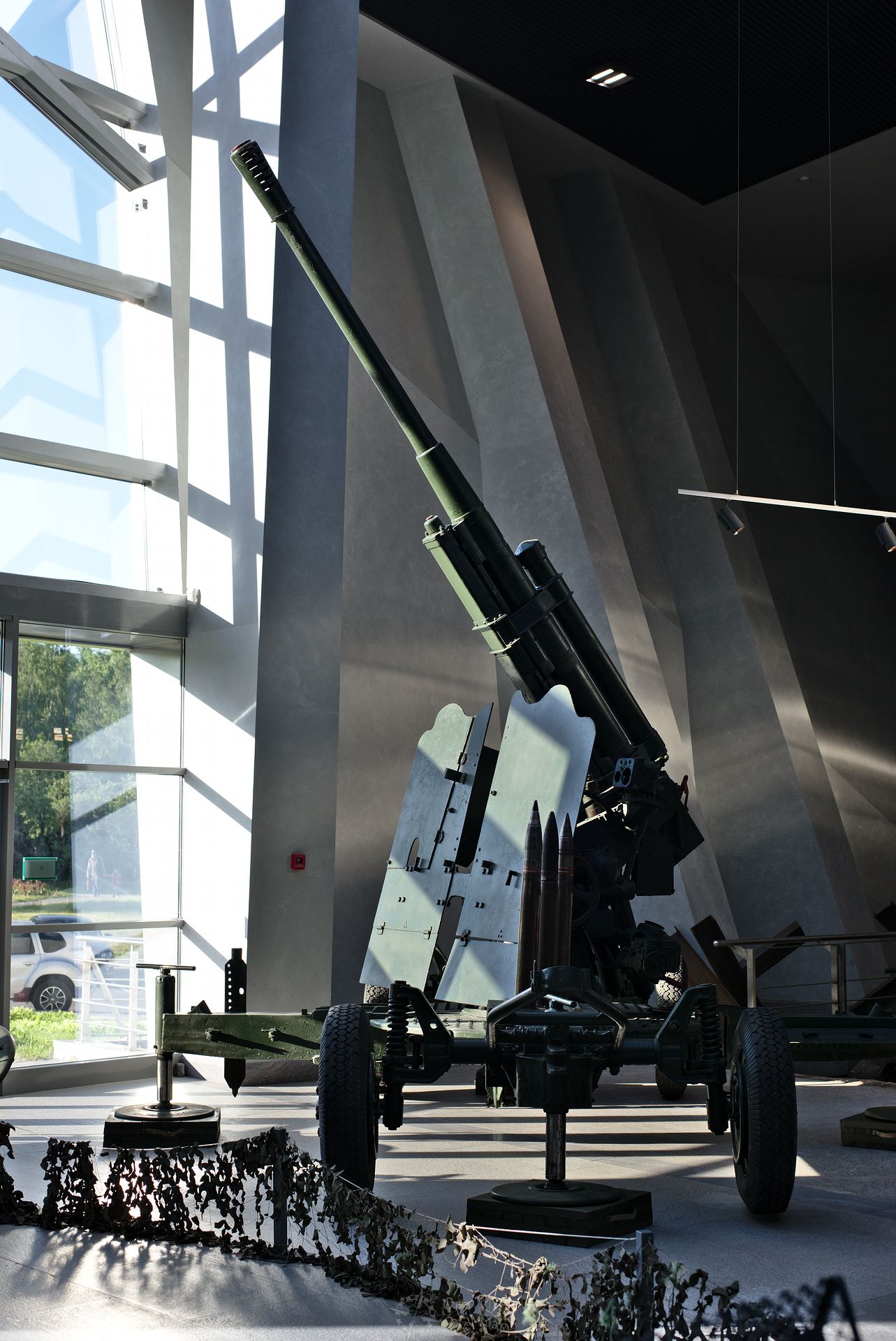 Up to this point one could probably say: Okay, a well-made museum, but very sterile. Maybe a good choice for a rainy day. But as mentioned earlier, Eastern Europeans on average have much less problems with events and symbols from the past than us Germans. How about, for example, a nice portrait photo with a Wehrmacht General against the backdrop of a German bunker? Or a selfie with the imperial eagle in the background? No? 😉 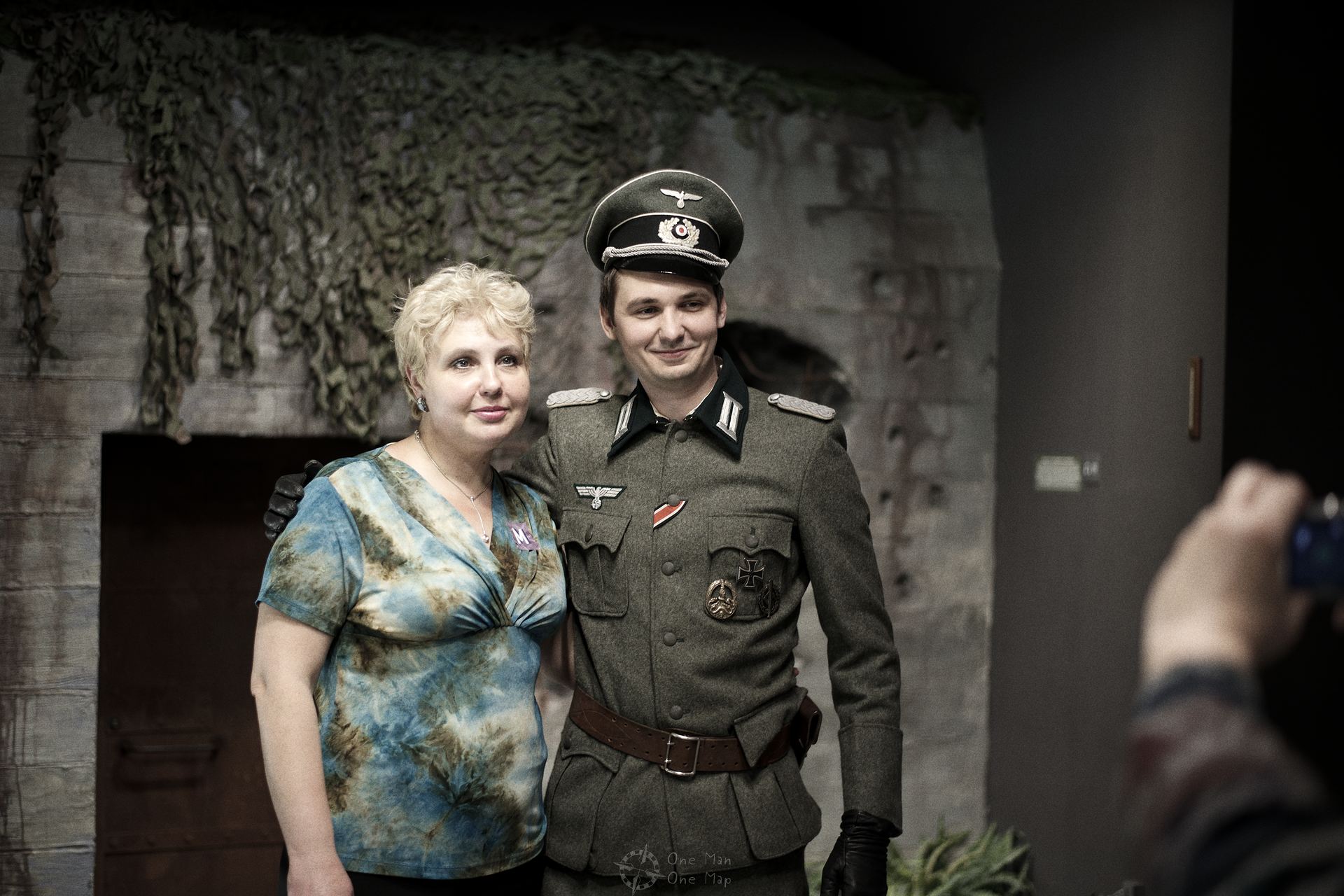 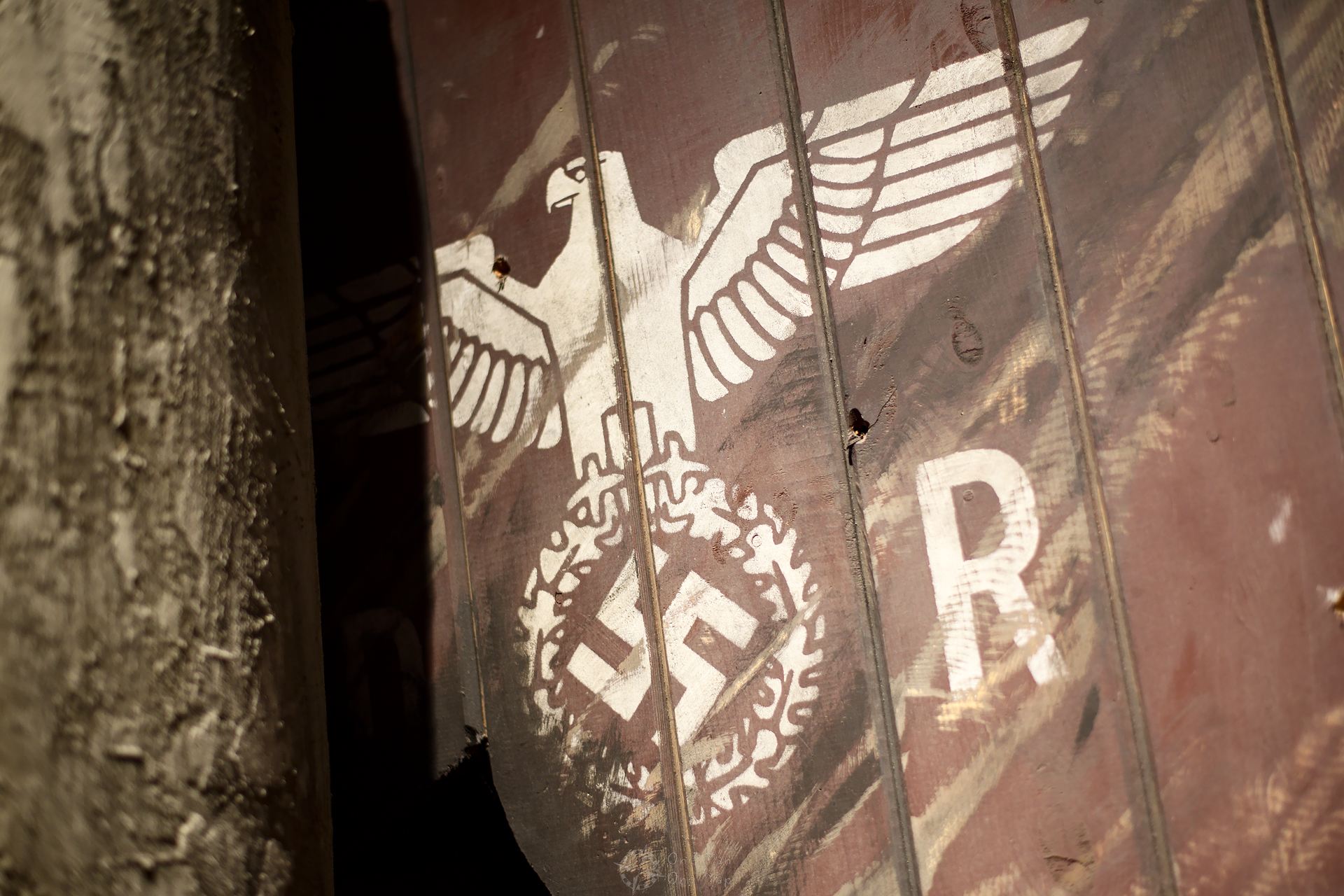 “STOP! ID!”, one of the two actors shouted at me in German. “CAMERA! SPY!” the other one added. Two submachine guns were aimed at me, the typical red and white bandages decorating the arms of the two Nazi collaborators. I was completely confused for a moment, then I identified myself as a German and was allowed to pass without harm. The Belarusian visitors, on the other hand, had to undergo some handbag inspections before they were classified as harmless civilians.

One part of the exhibition area was dedicated to the German occupation of the country from 1941 to 1944 and also covered the role of their collaborators. In Germany one would probably have great difficulty finding performers for such amateur roles, but for the Belarusian student and his older colleague this was just an unusual engagement. 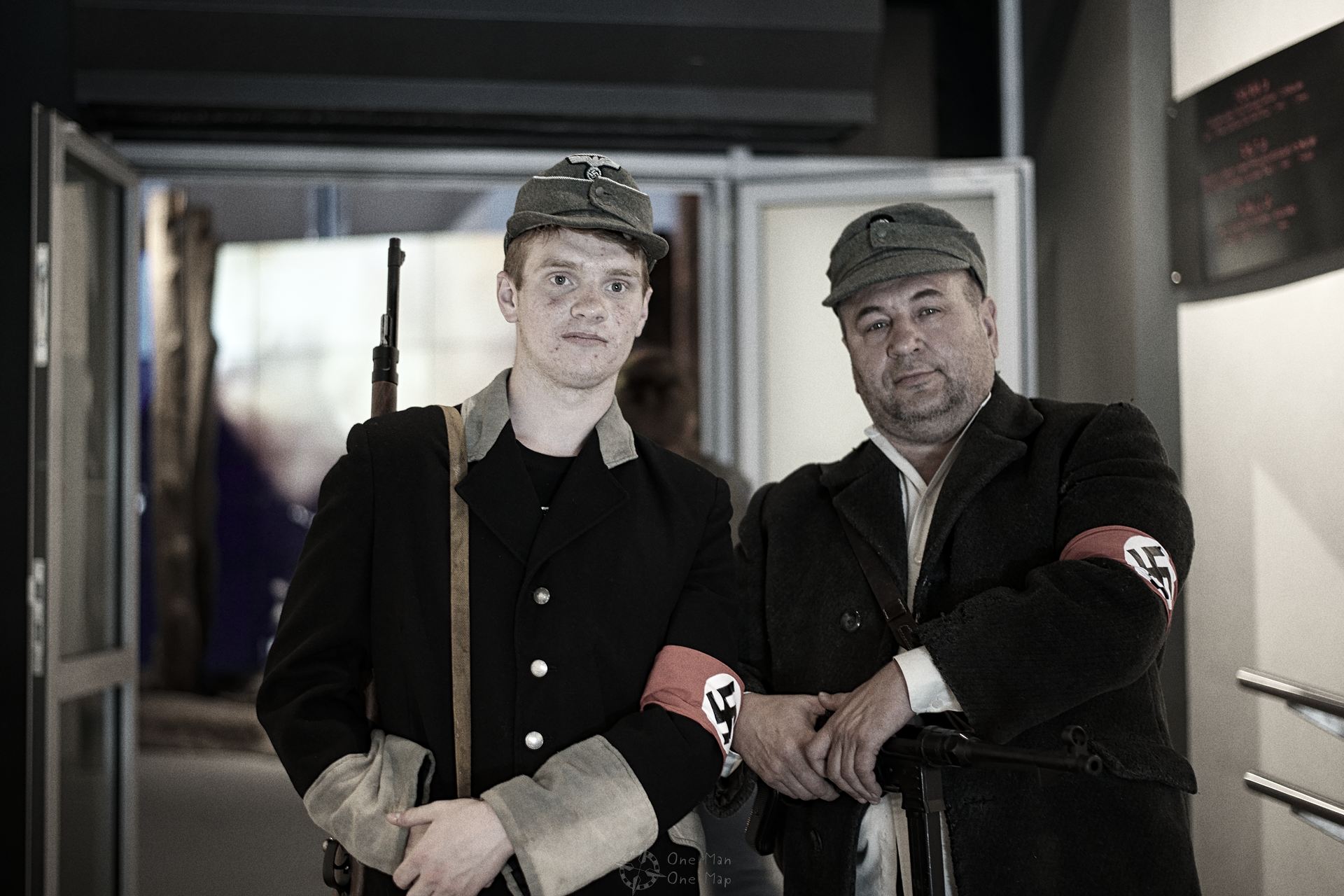 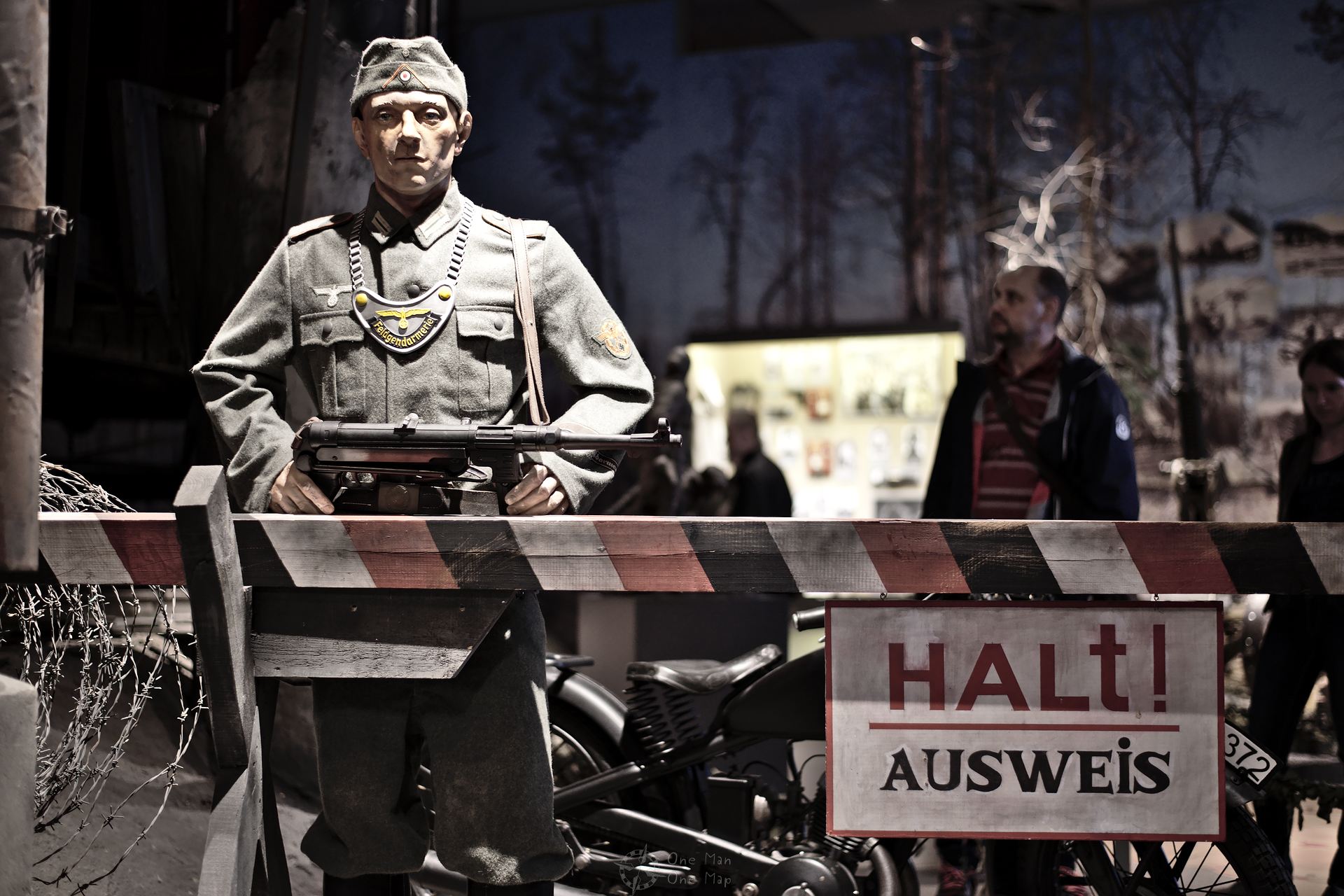 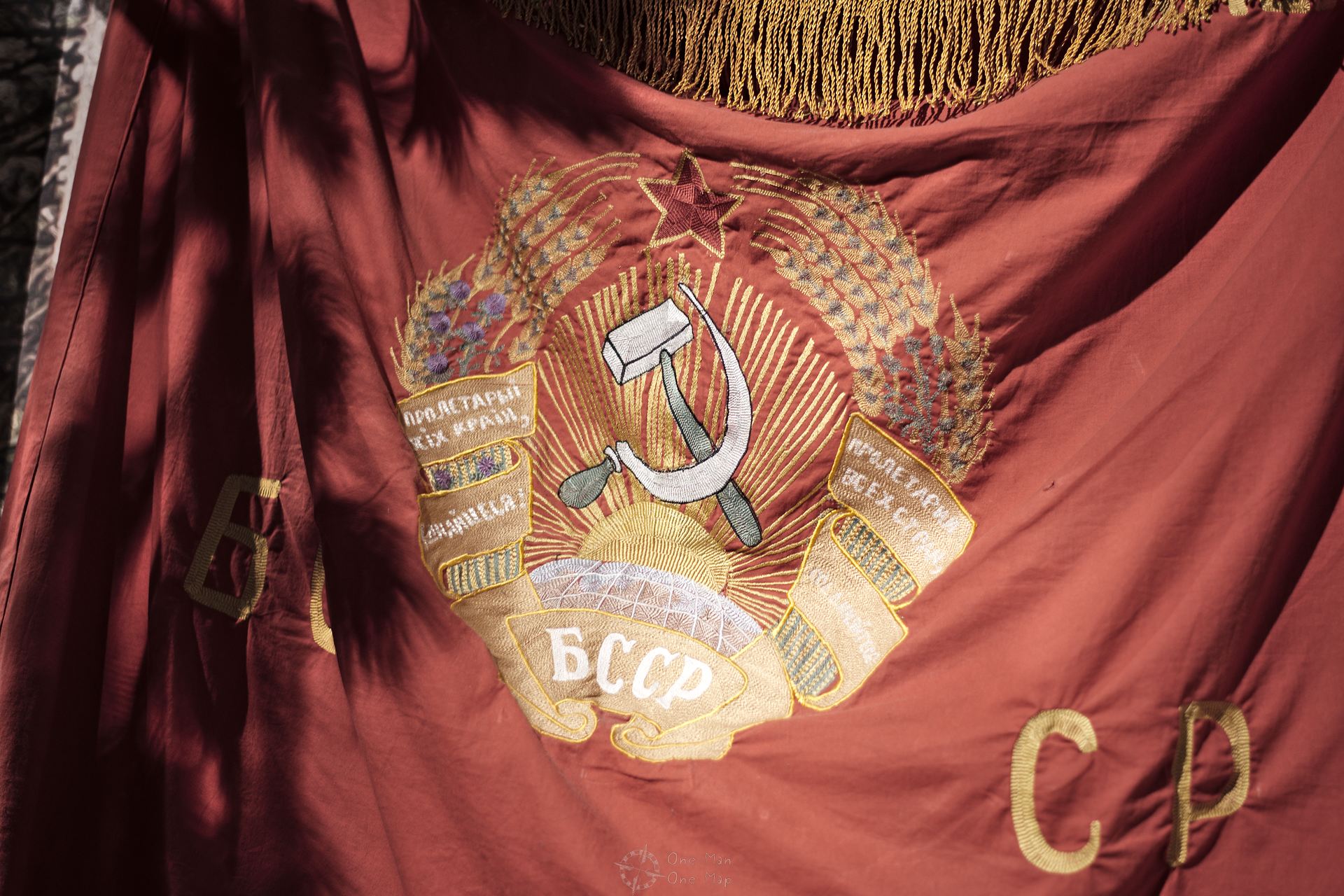 A varied programme was offered during the Night of the Museum. Visitors could prove at various stations if they would have been good patriots, collecting points for a raffle at the same time. Activities included embroidering flags, transmitting secret messages, and bandaging wounded soldiers in a simulated field hospital. Hard to imagine the same event taking place in Germany… 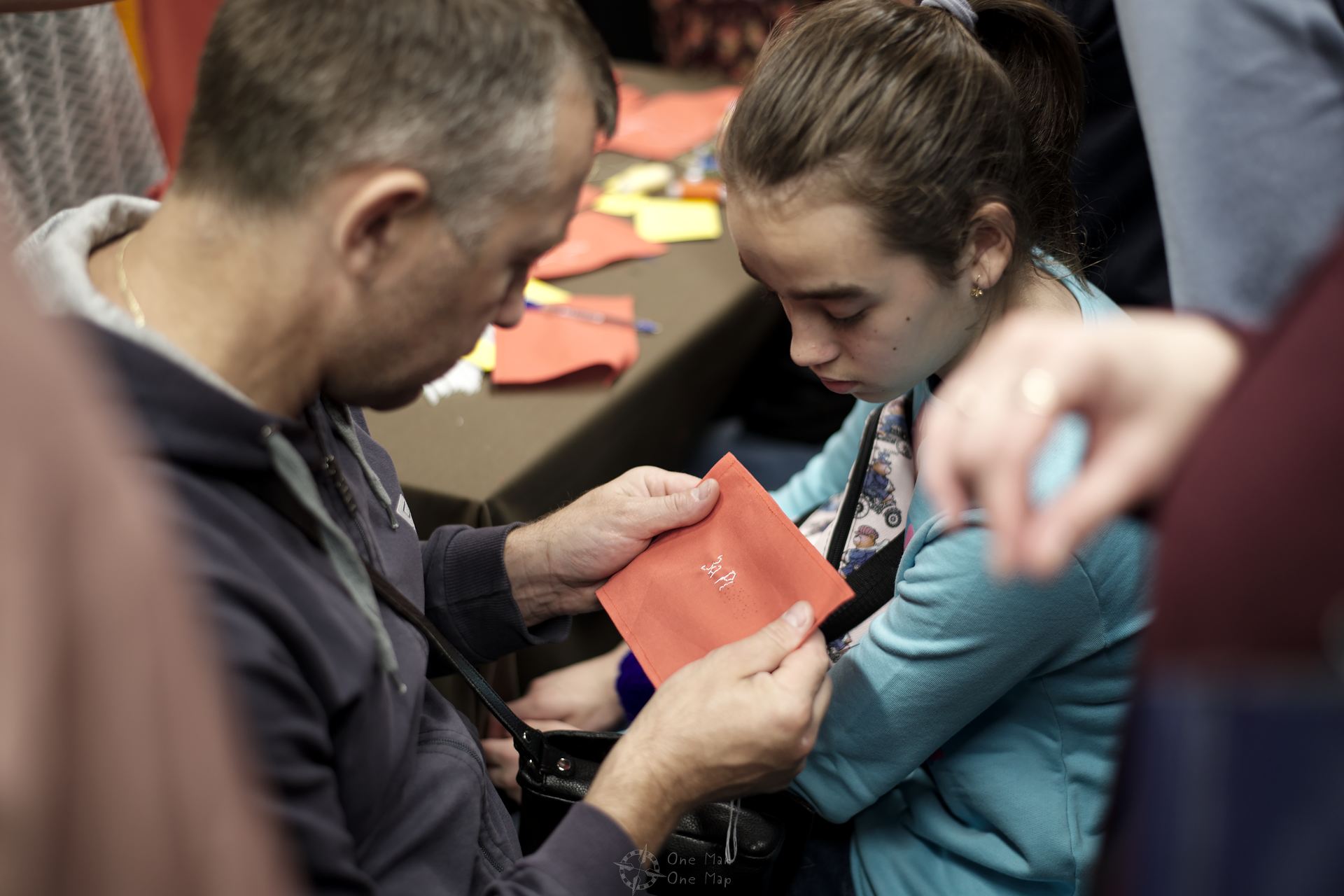 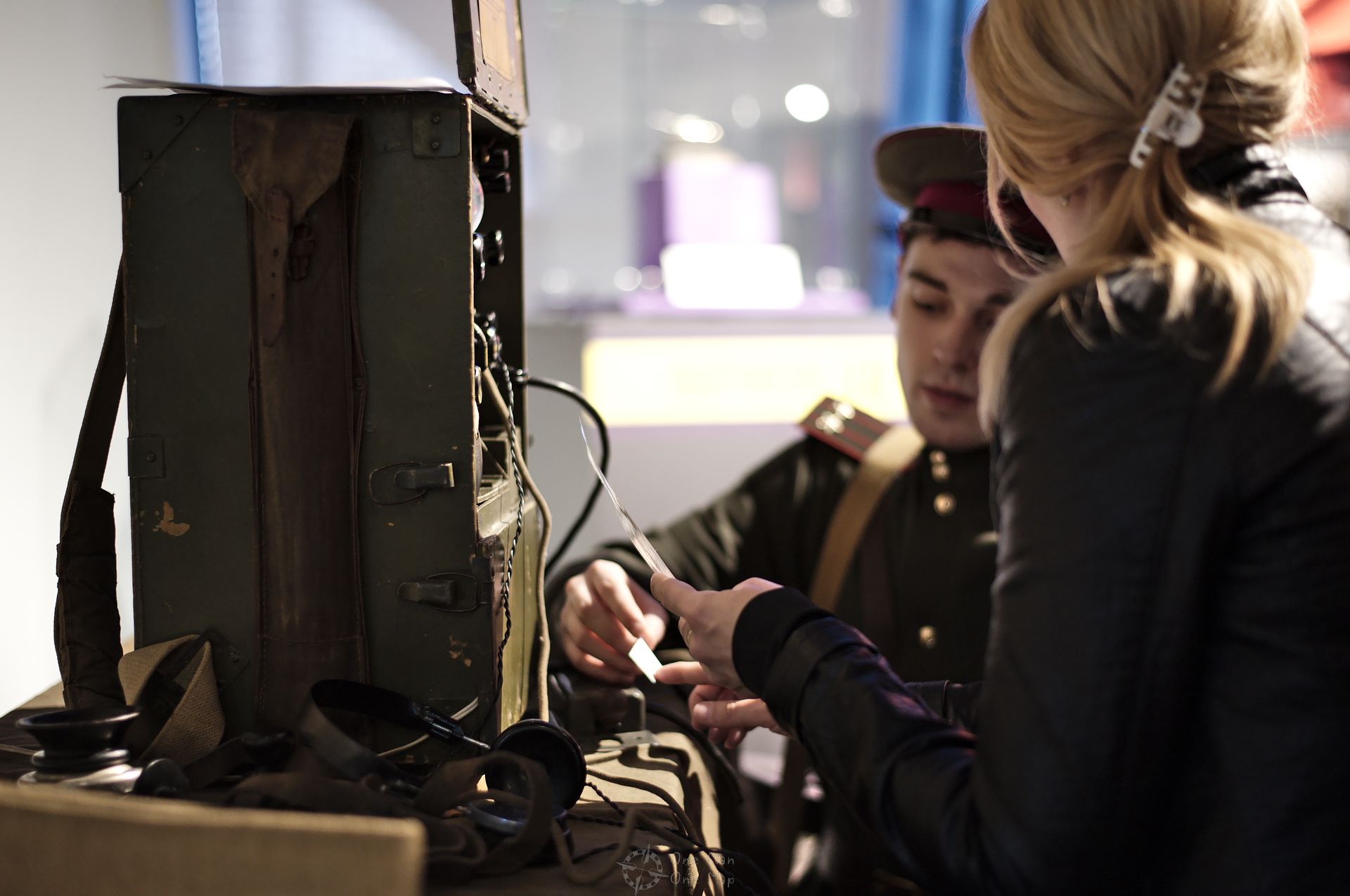 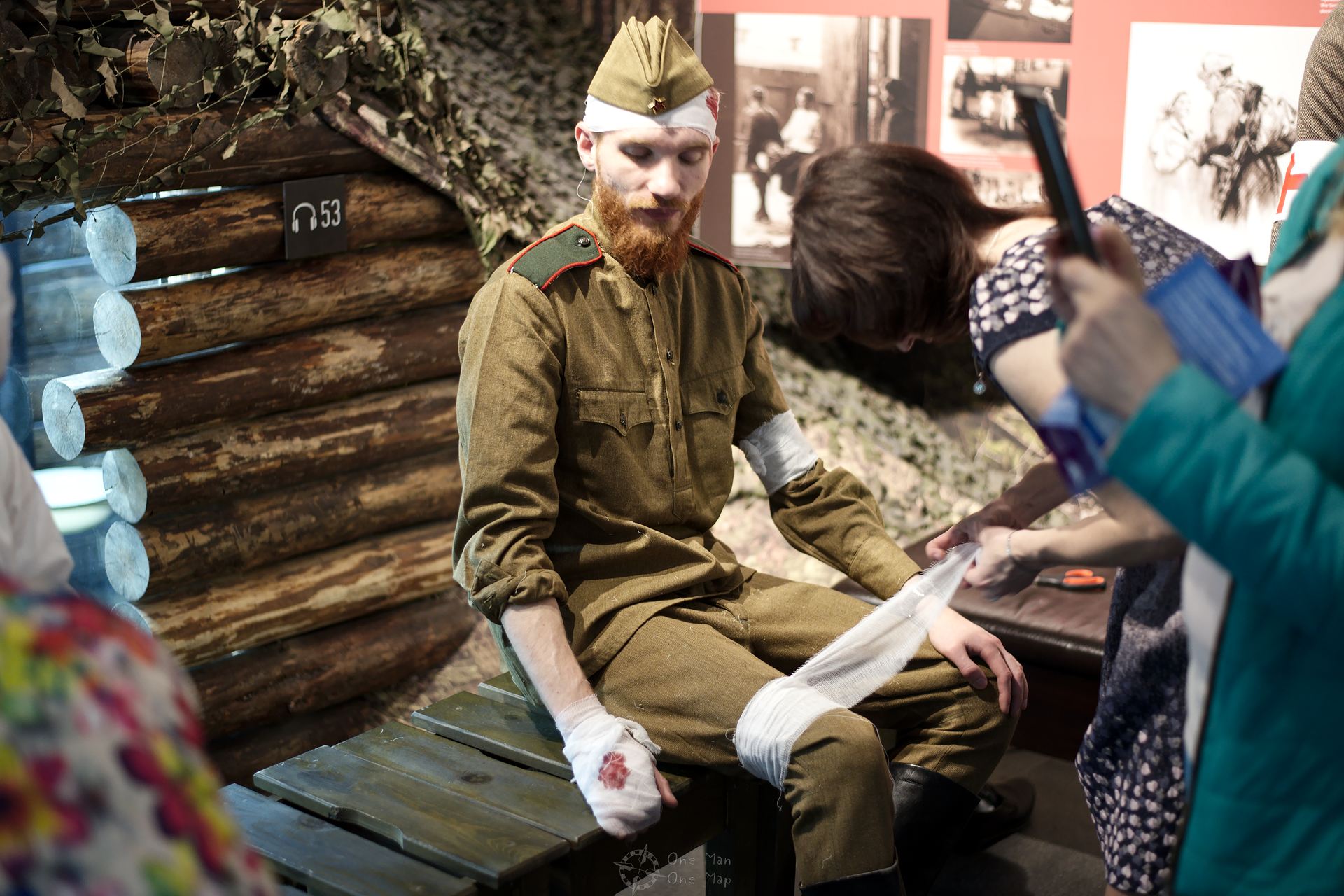 The names of the fallen from different wars were listed in the victory hall under the roof dome. Larger ceremonies can be held here. 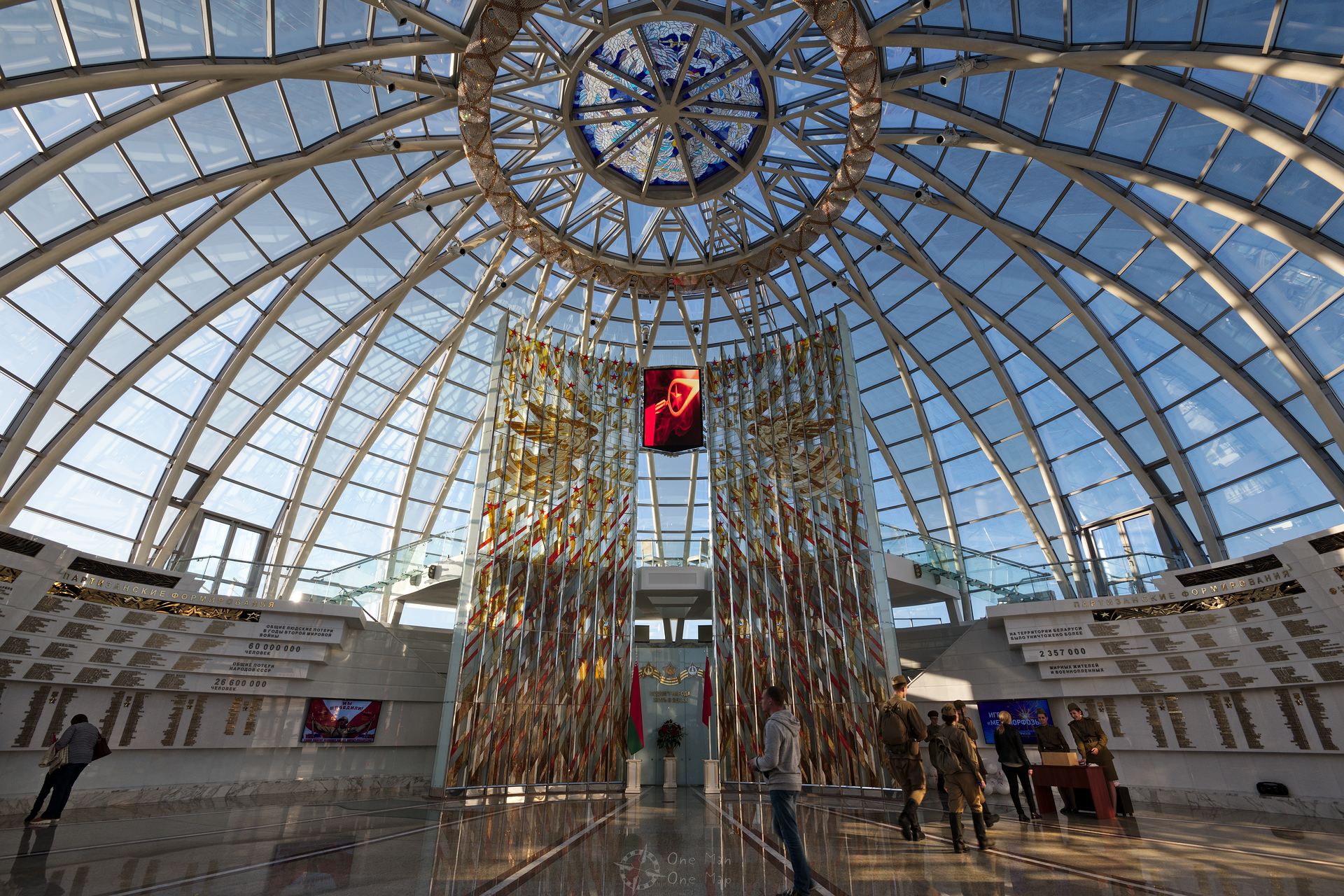 The evening program continued in the outdoor area. While the Red Army Supply Forces served barley porridge with a bit of meat, visitors were able to have a casual chat with soldiers and collaborators from both sides. Somewhere in the background somebody was singing the old soldier’s song Katyusha (Катюша ) in an endless loop at a karaoke station. 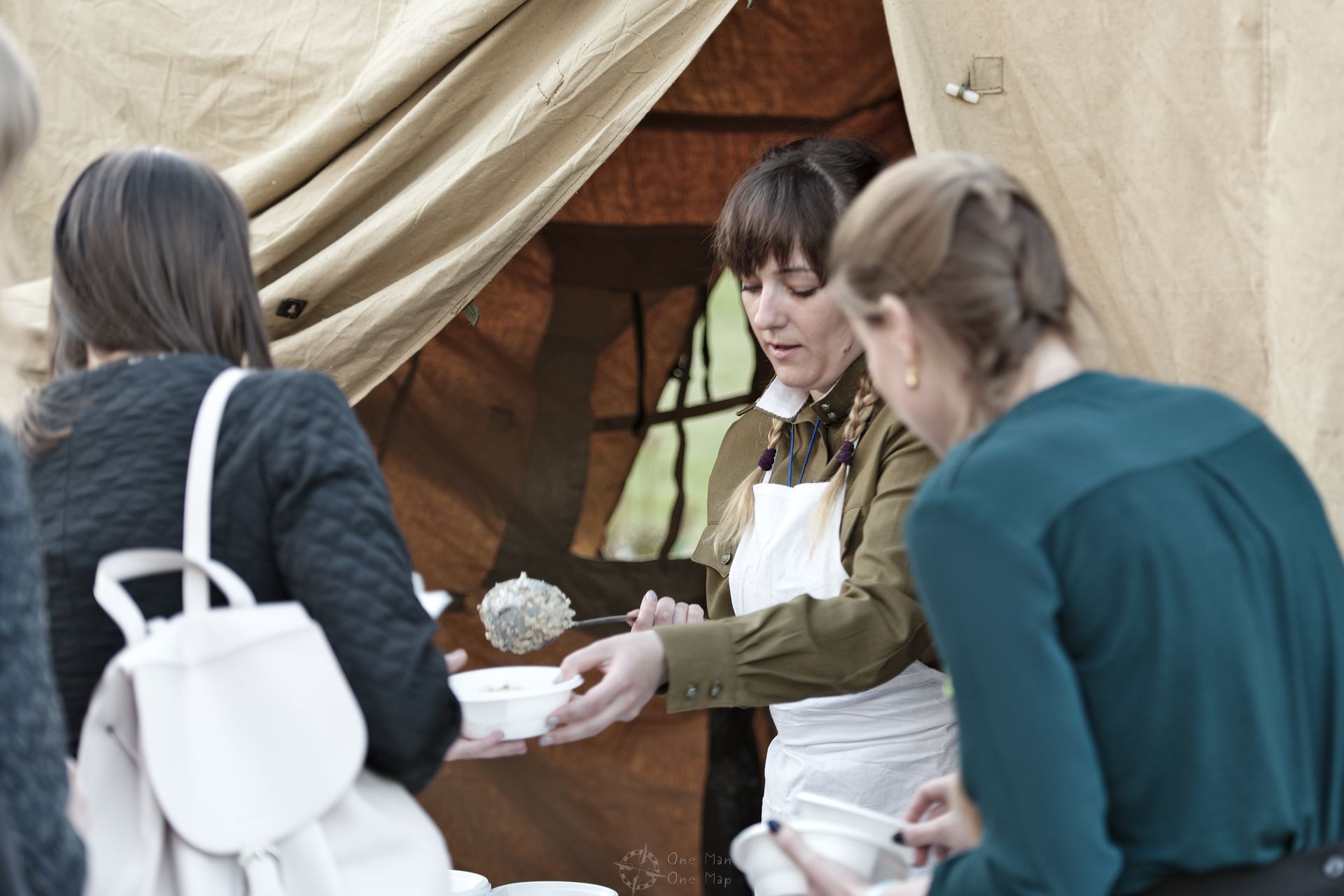 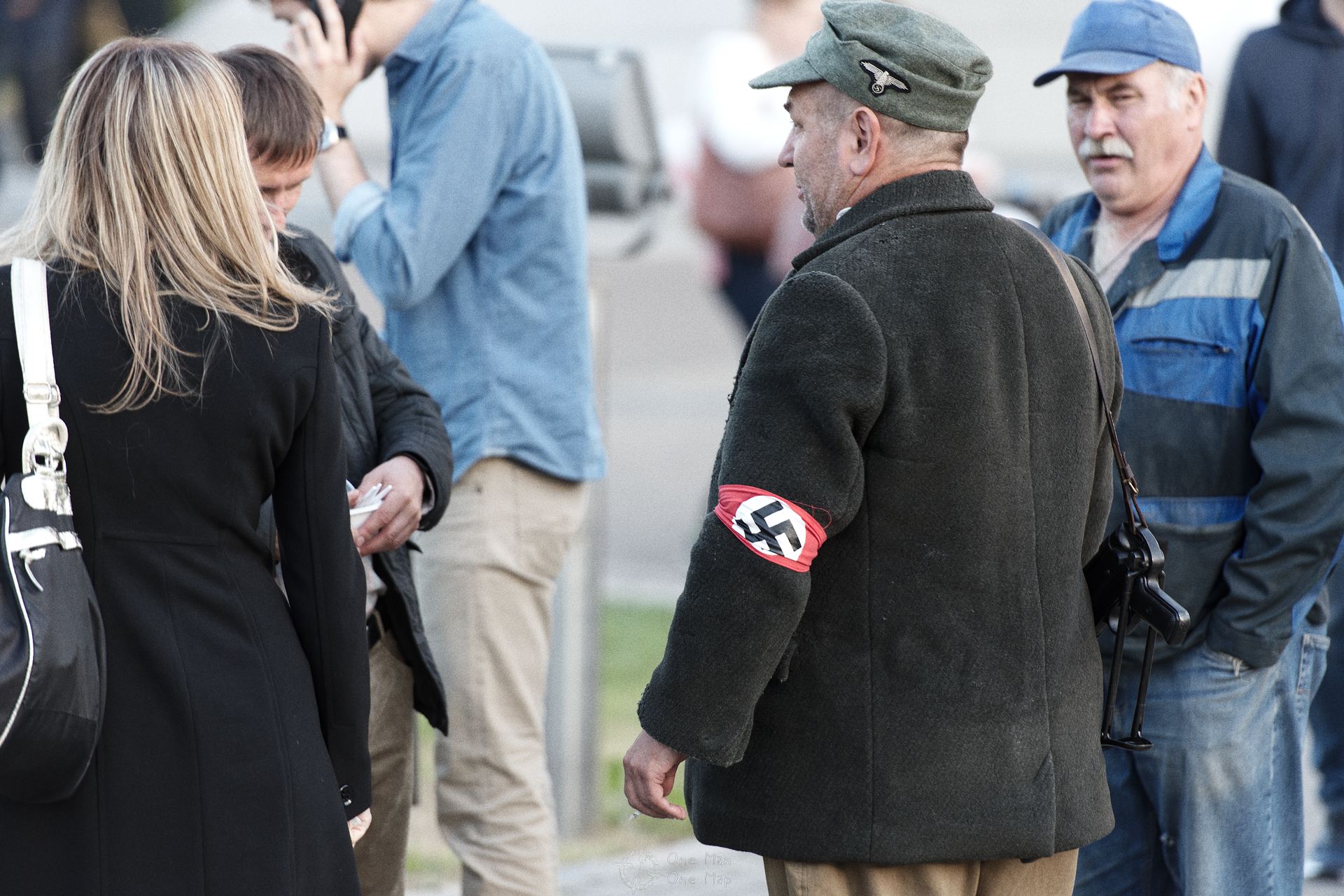 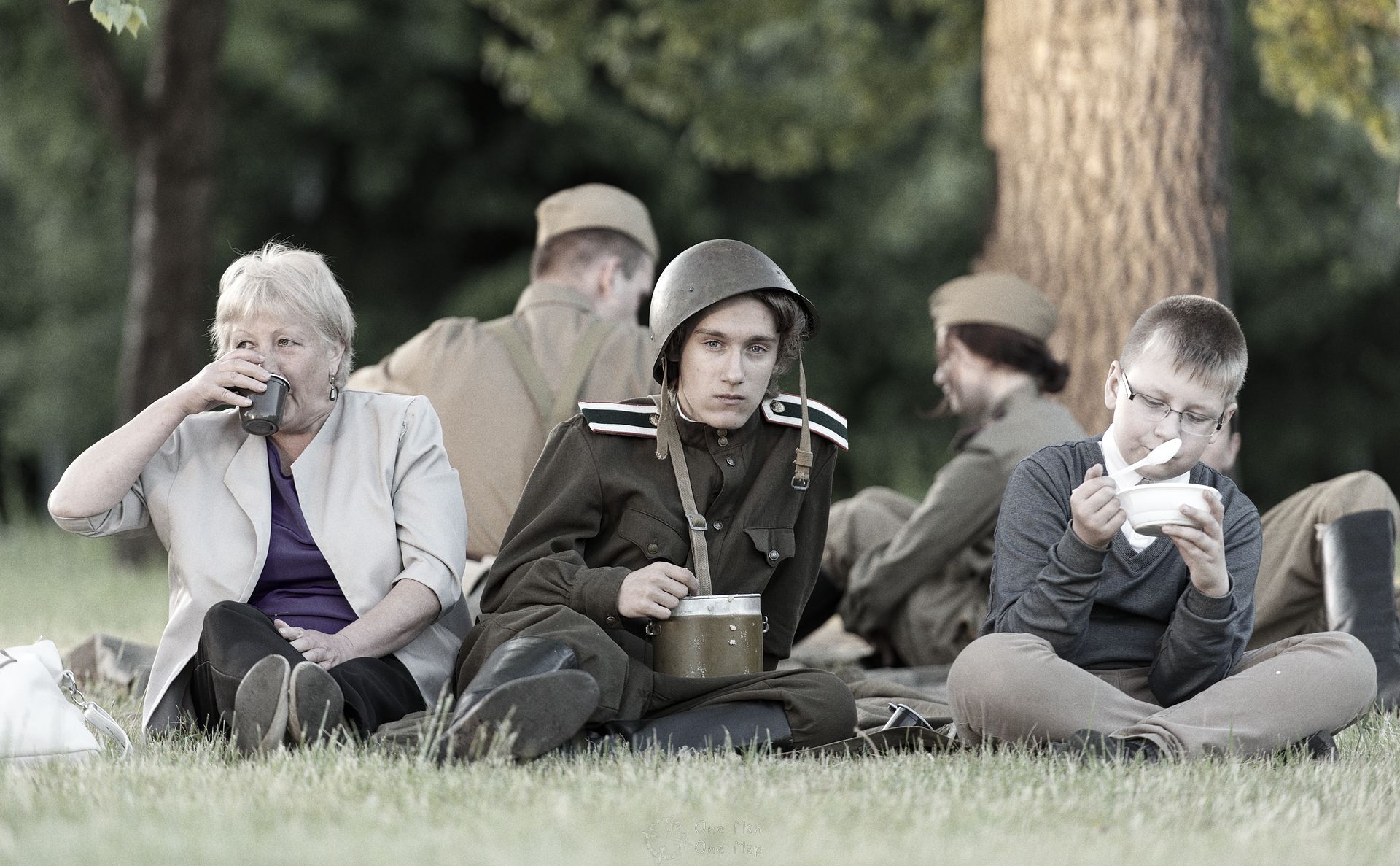 Victory Park is the largest park in the city, extending to the north of the museum over an area of about two by three kilometers up until Exhibition Center (Белэкспа</ em>). The Swislatsch (Свіслач) river was widened and deepened into a reservoir over a mile and a half in length at this point to Minsk protect against floods in springtime. The resulting Komsomolskaya Lake (Камсамольскае возера) serves as a recreational area for young and old. 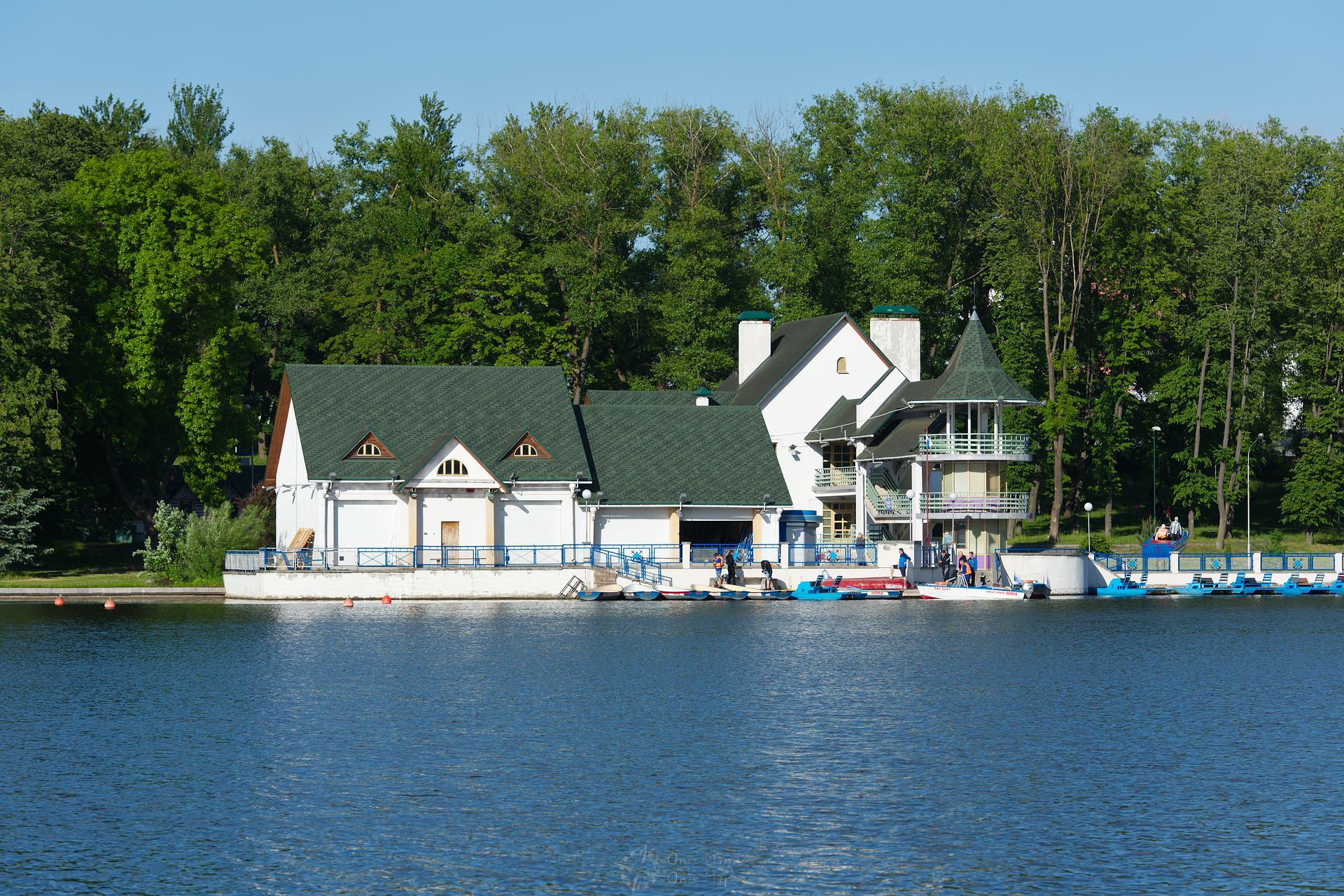 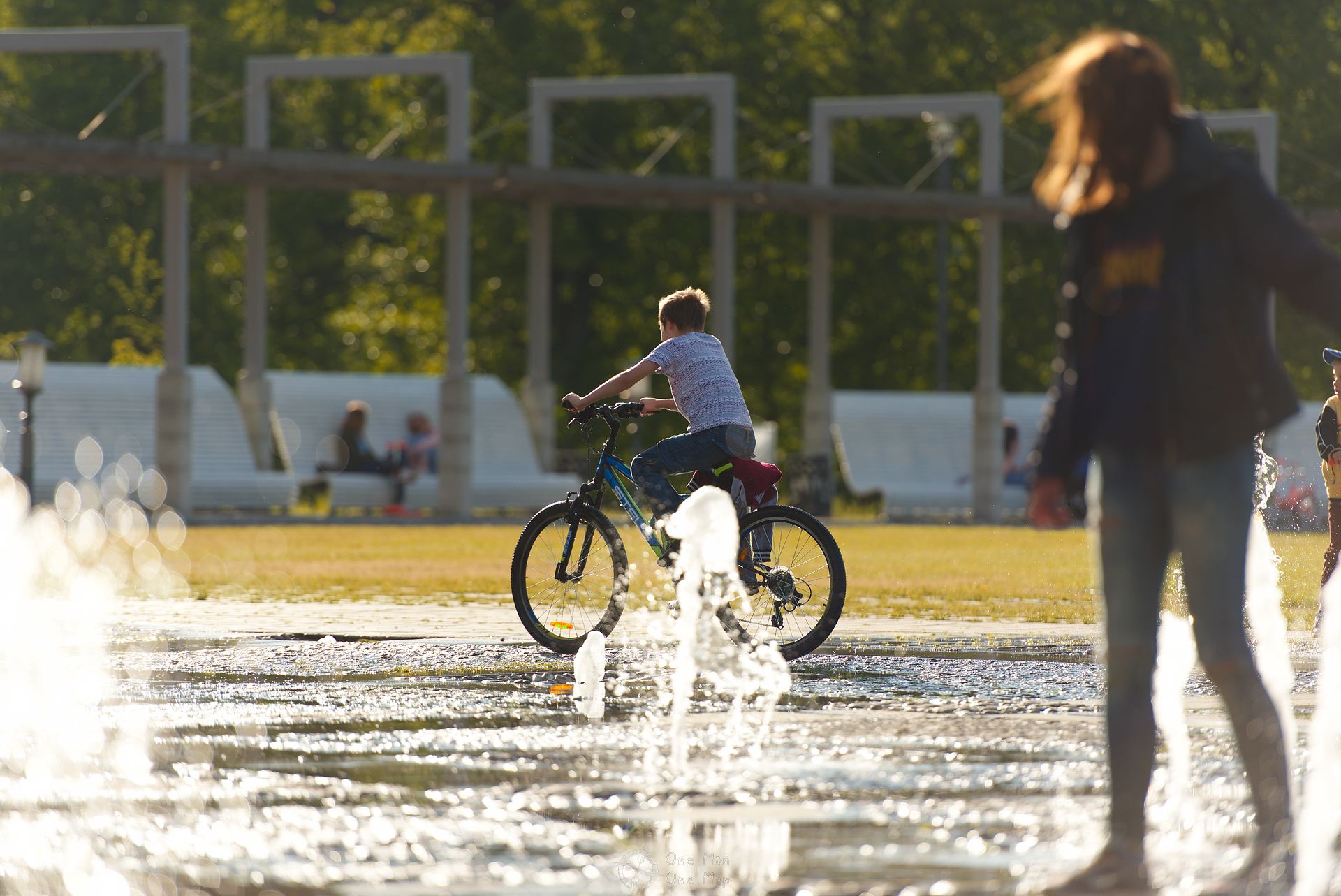 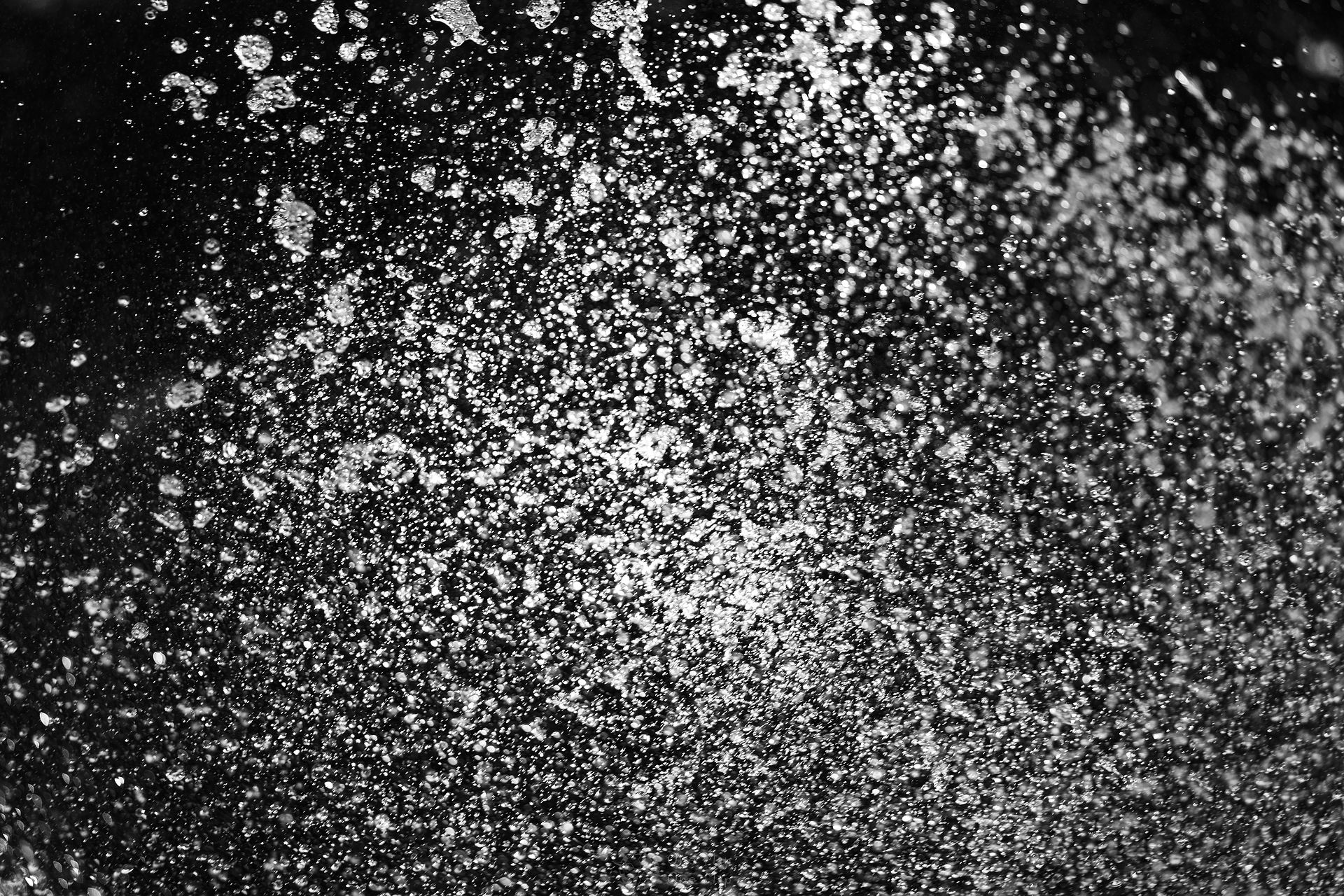 Almost modern and beautiful to look at by Soviet standards: the sculpture “The Way Forward” on the Lakeside, a contribution to the end of the Second World War by artist Pavel Voynitskiy. 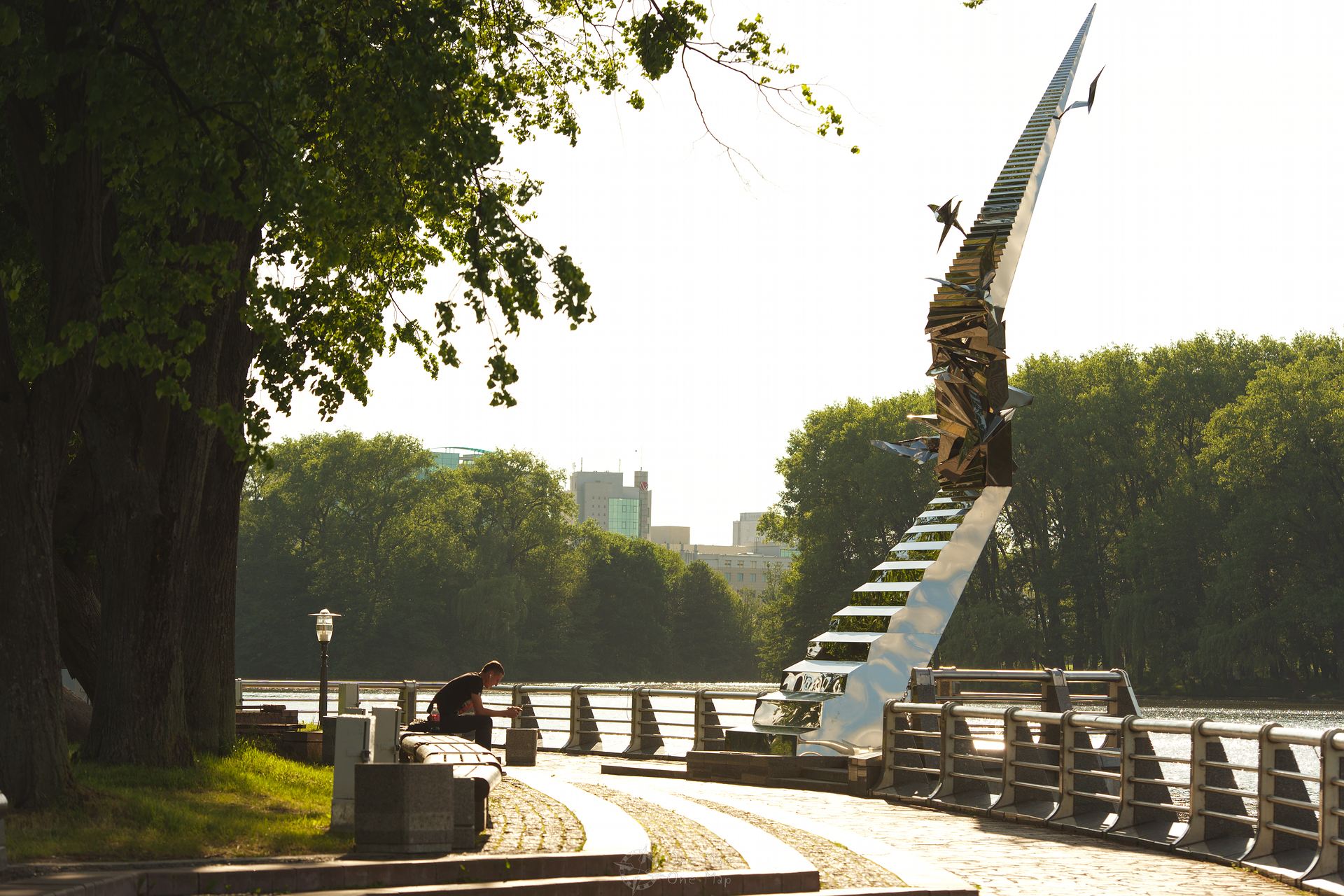 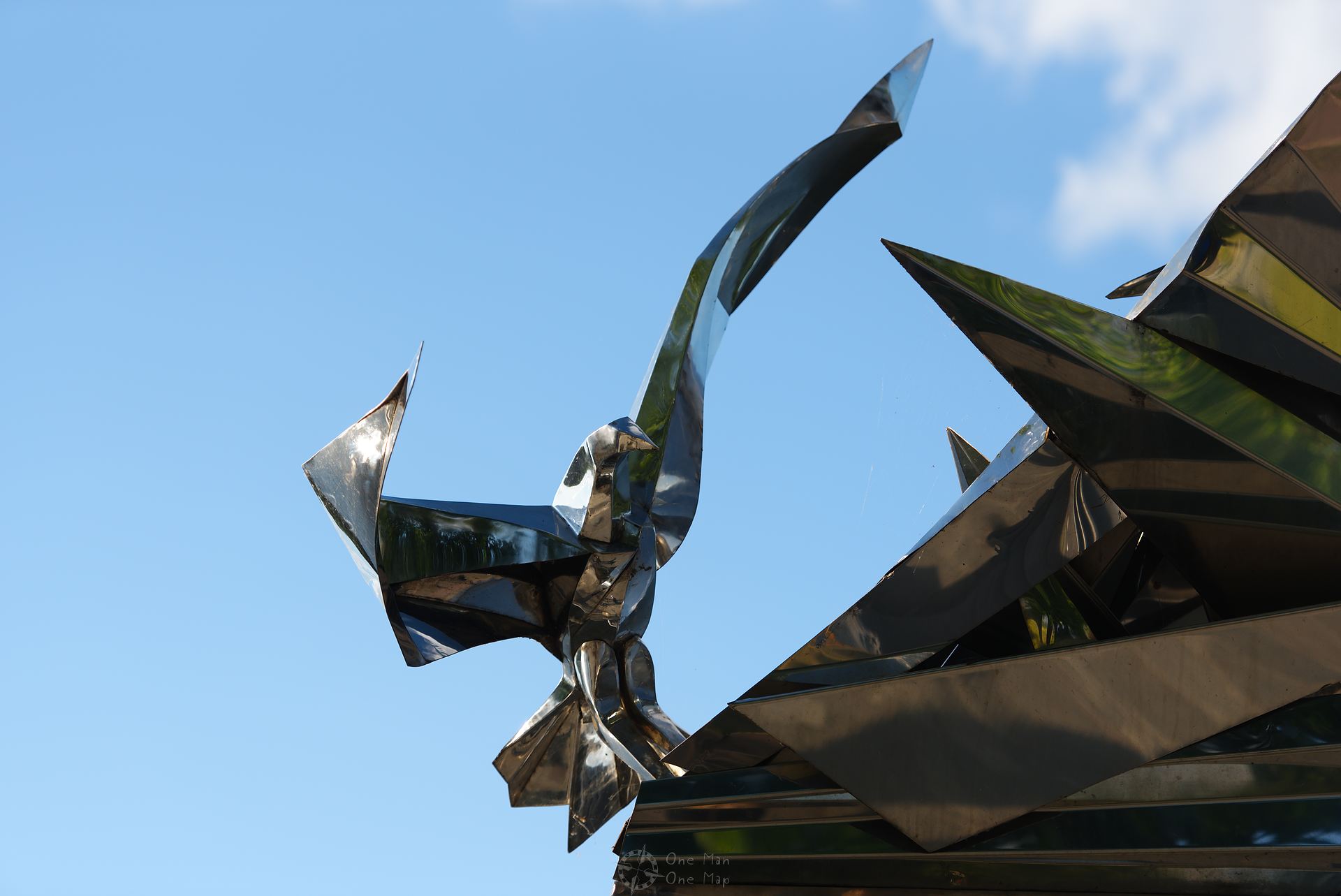 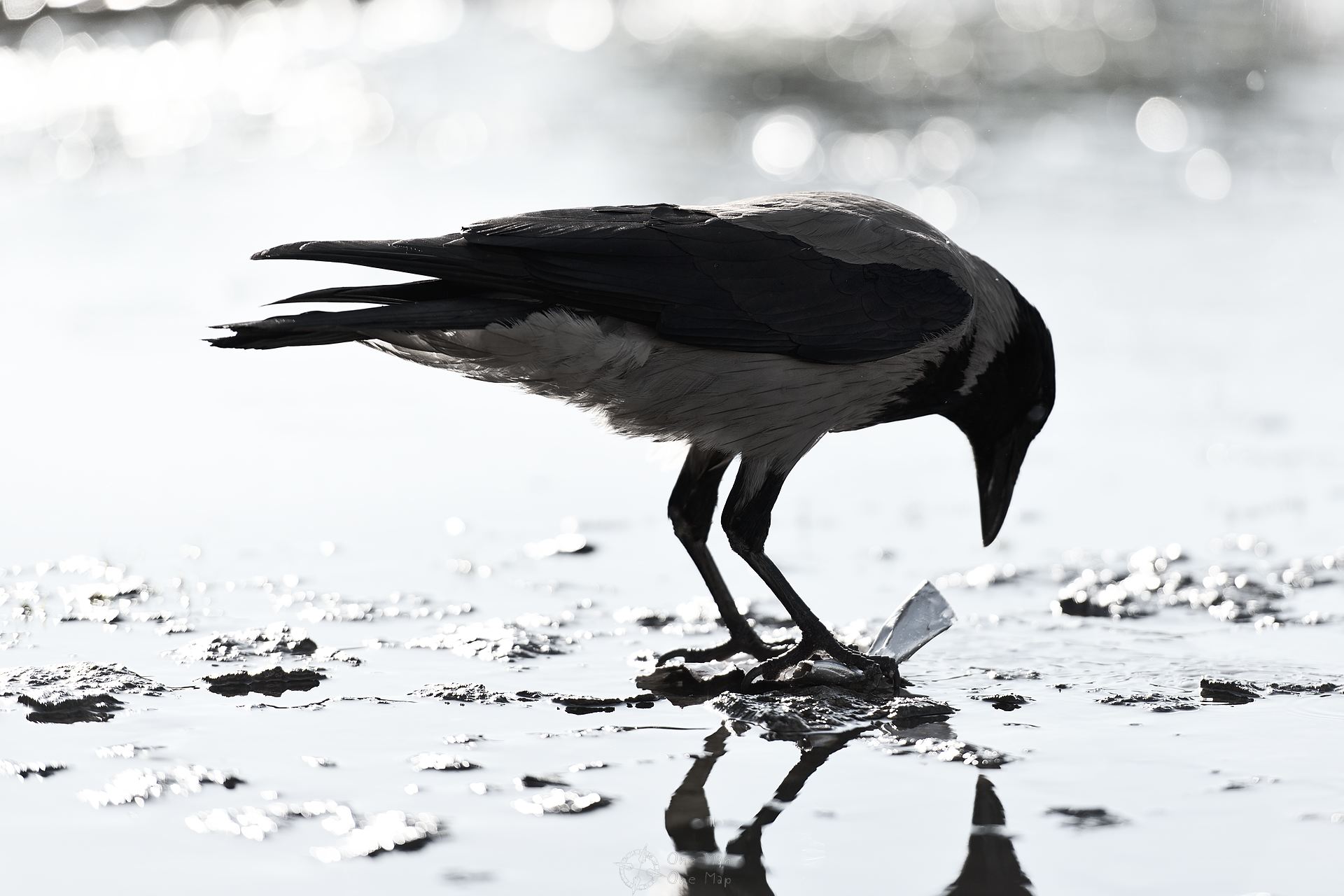 Shortly before sunset I made my way back to the hotel at 9 pm after a quite weird, but very interesting day. Next time we’ll get on a road trip through Belarus… 🙂 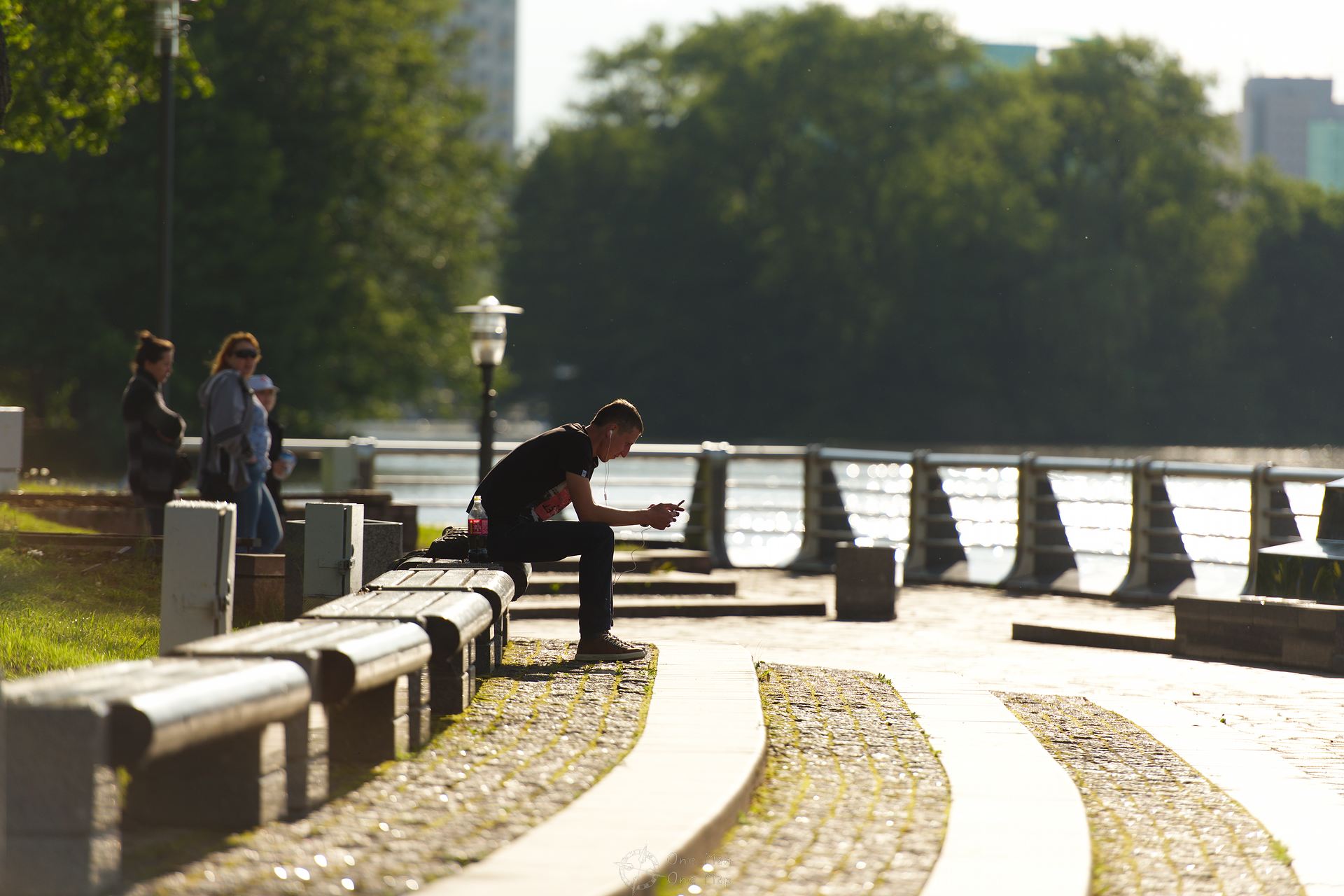 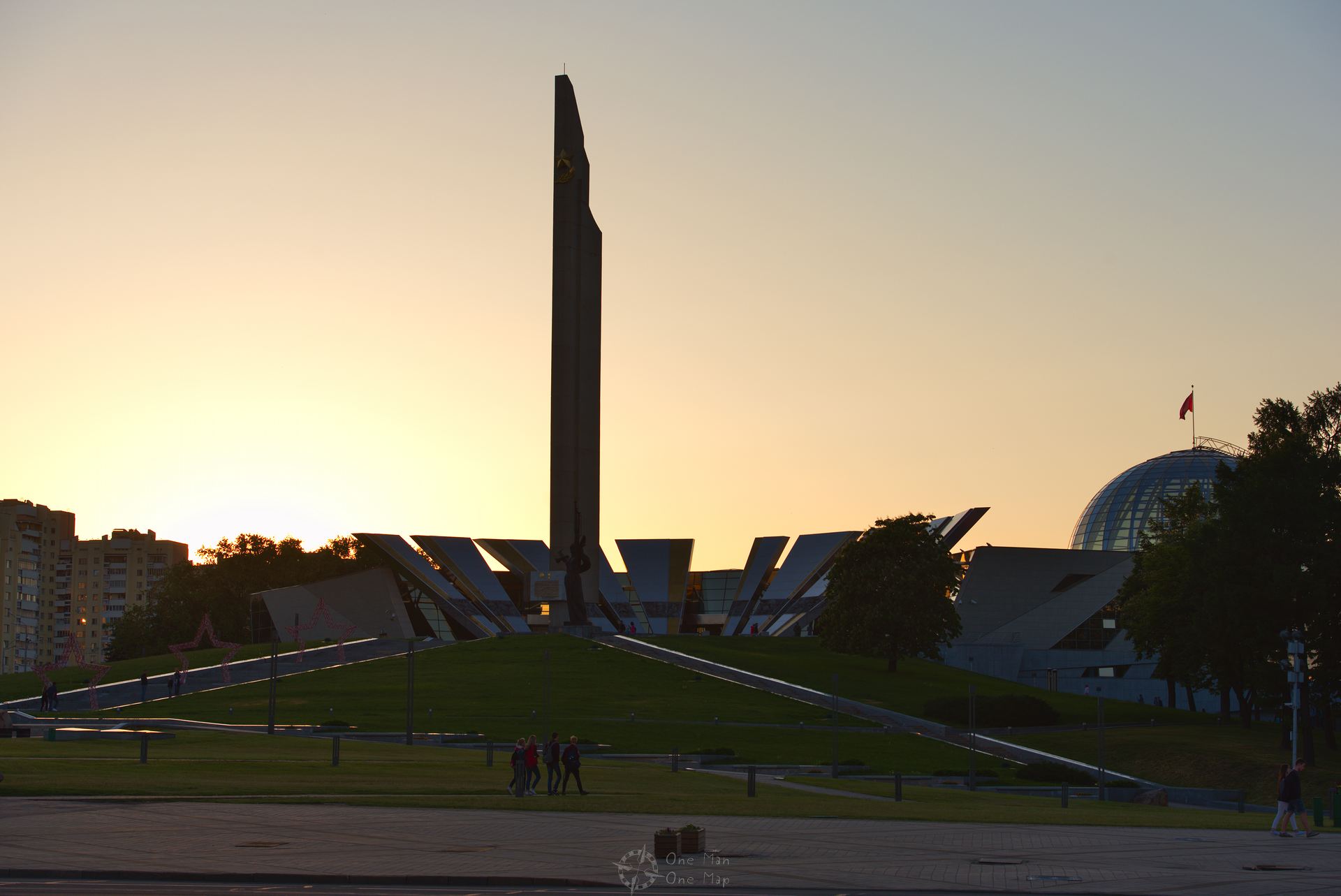