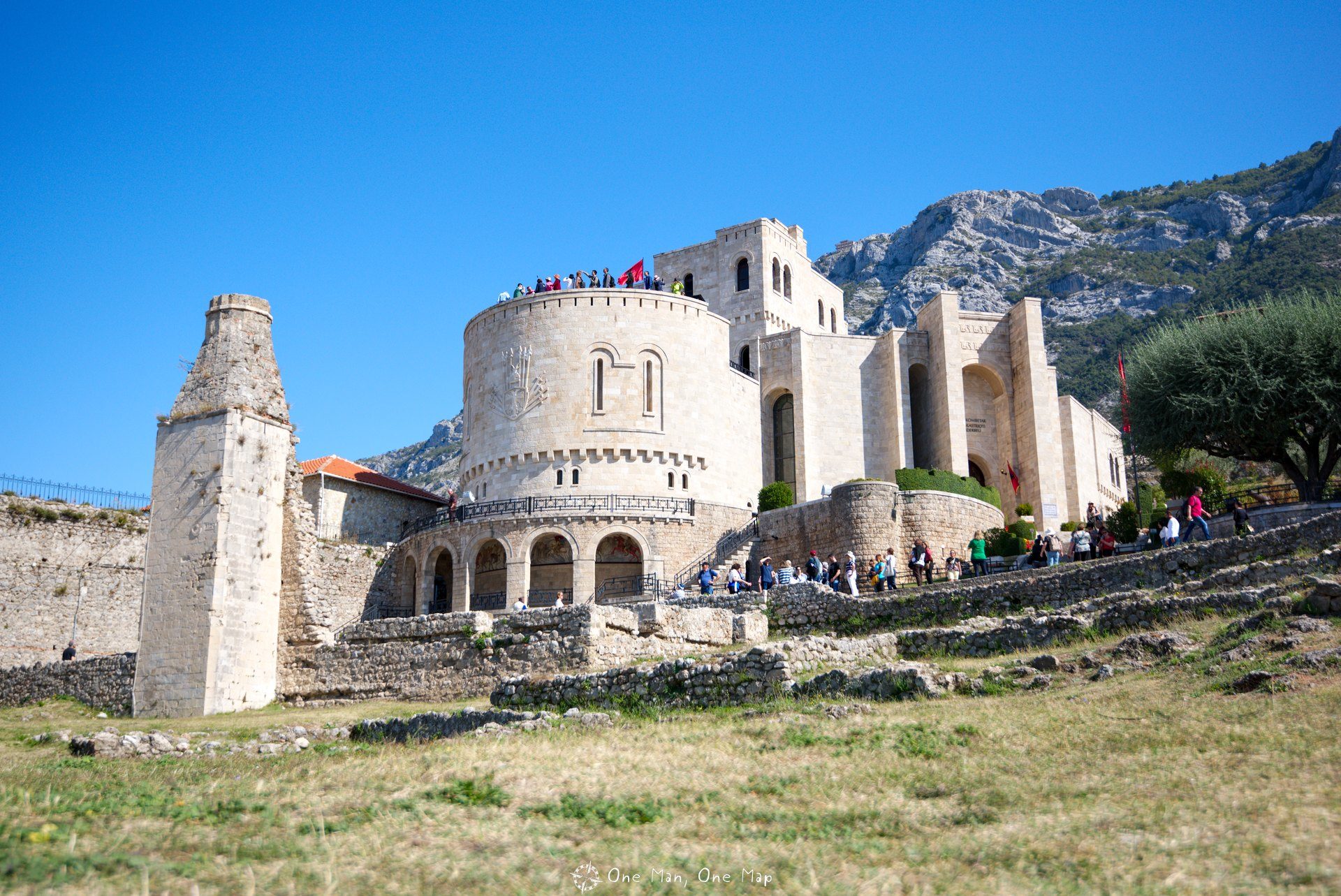 For an overview on Albania, have a look at the introductory post.

Krujë (Kruja) is an Albanian town located about 30 kilometers from the capital Tirana. The small town is located high up on a steep slope of the Mali i Krujës, one of the peaks of the Skanderbeg mountains. And that’s already today’s topic. Welcome to the home of Albanian national hero Georg Kastriota, called “Skënderbeu” (Skanderbeg) 🙂

Unlike most other places in Albania, Krujë has everything tourists desire: nice cafes and restaurants, market stalls selling souvenirs, a fortress and a perfectly staged museum. Most visitors come to Krujë on a day trip from Tirana or Durrës. We visited the town during the otherwise monotonous journey from Tirana to Kotor in Montenegro. As always, a map with all mentioned attractions and a downloadable GPX file can be found at the end. 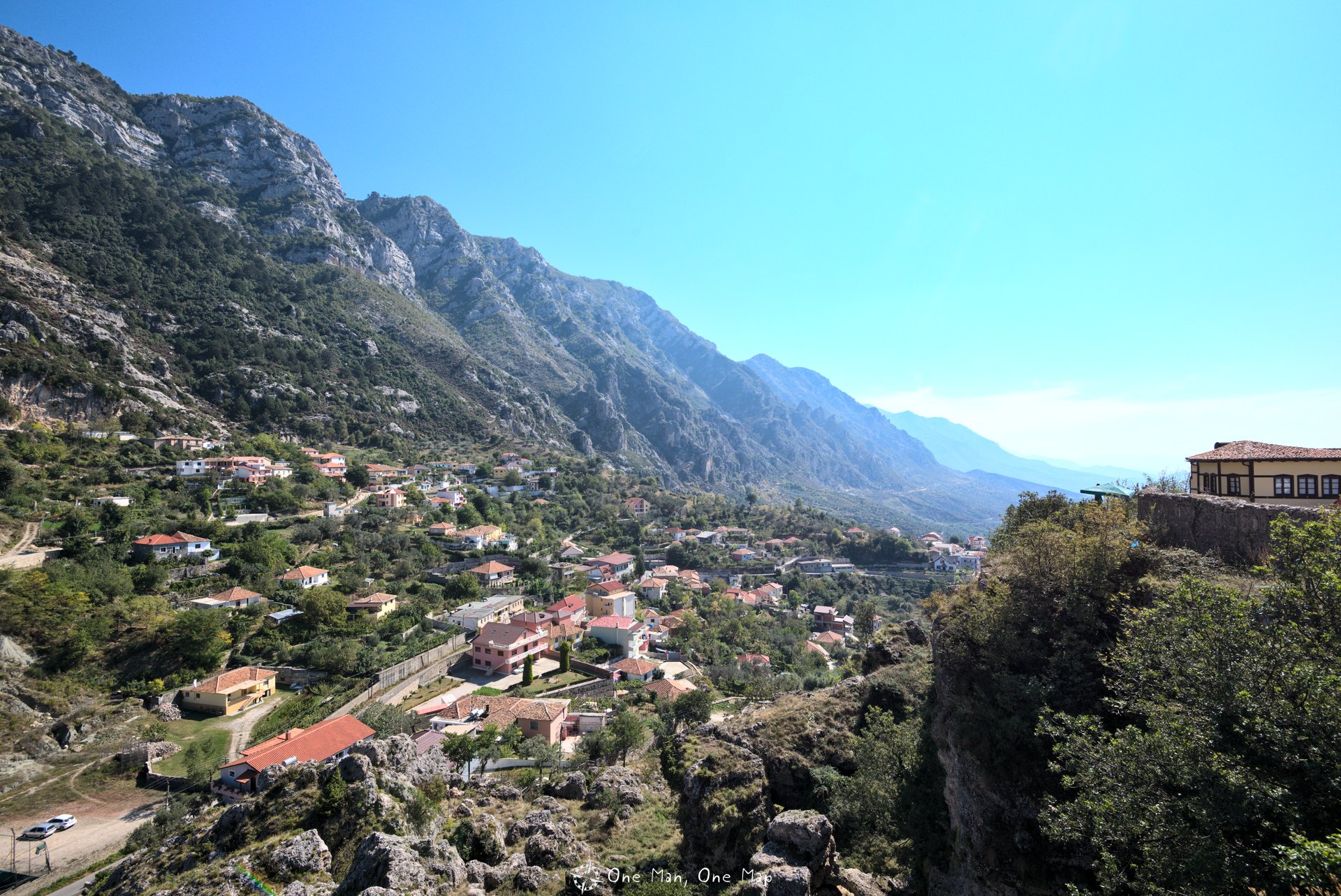 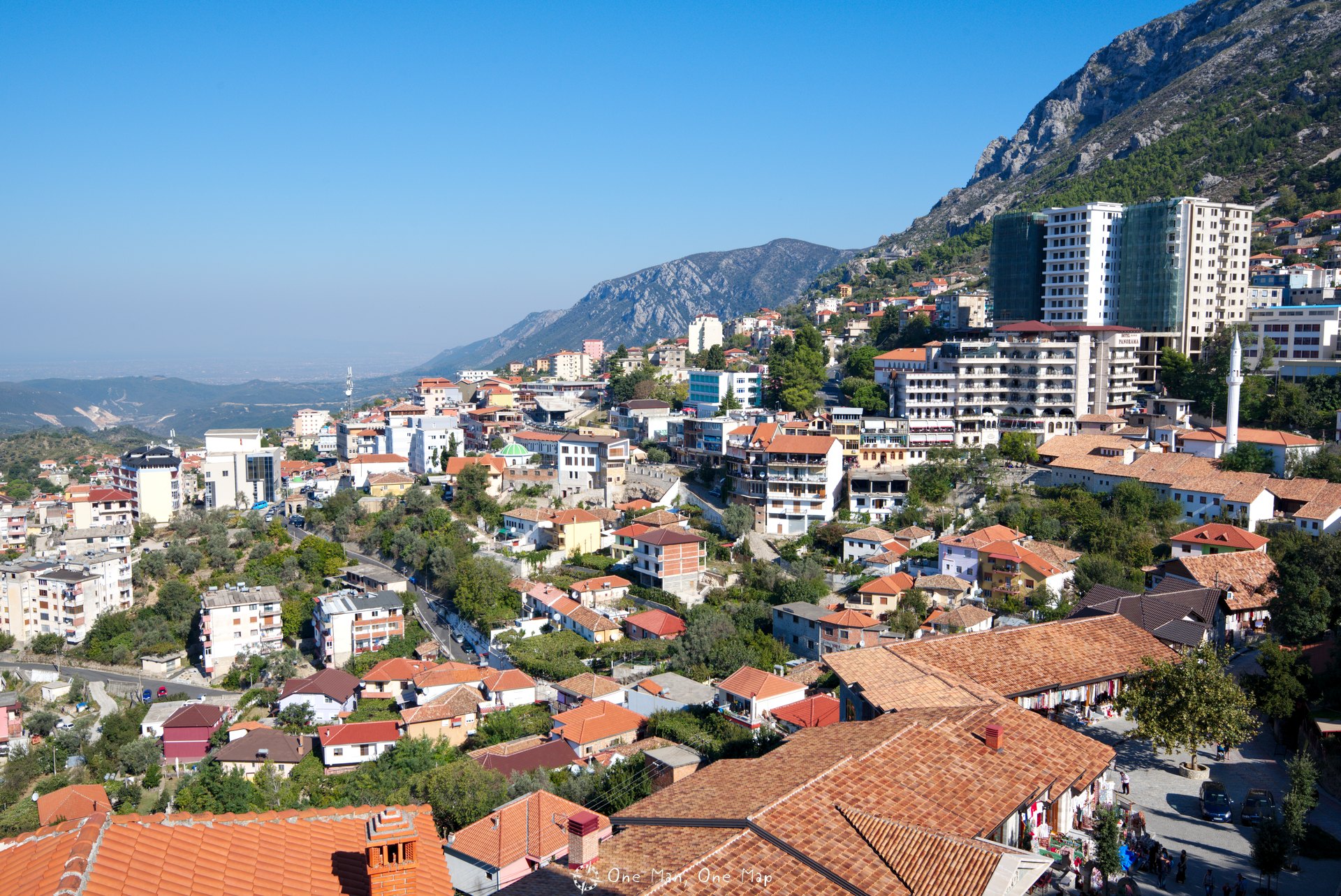 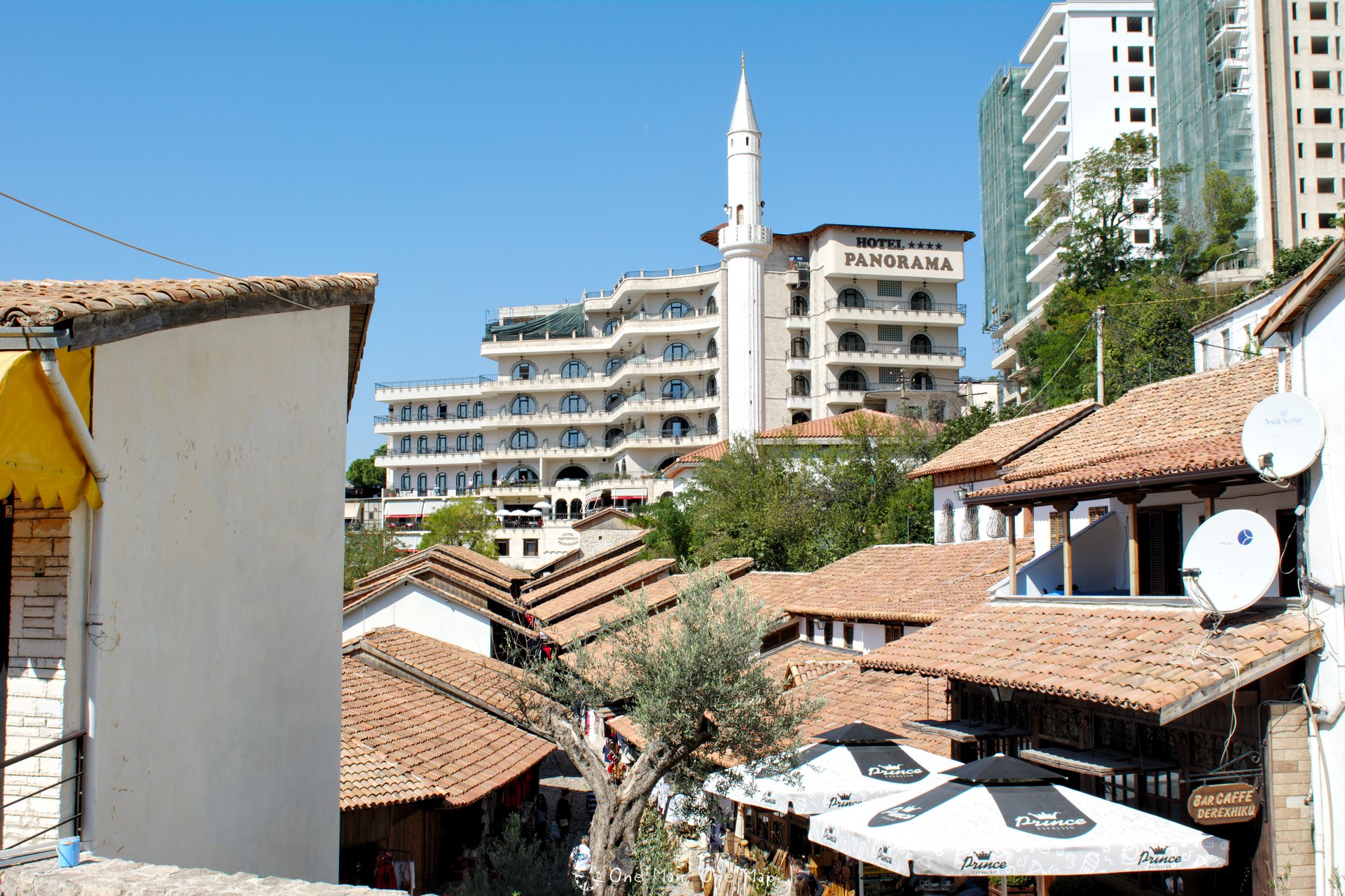 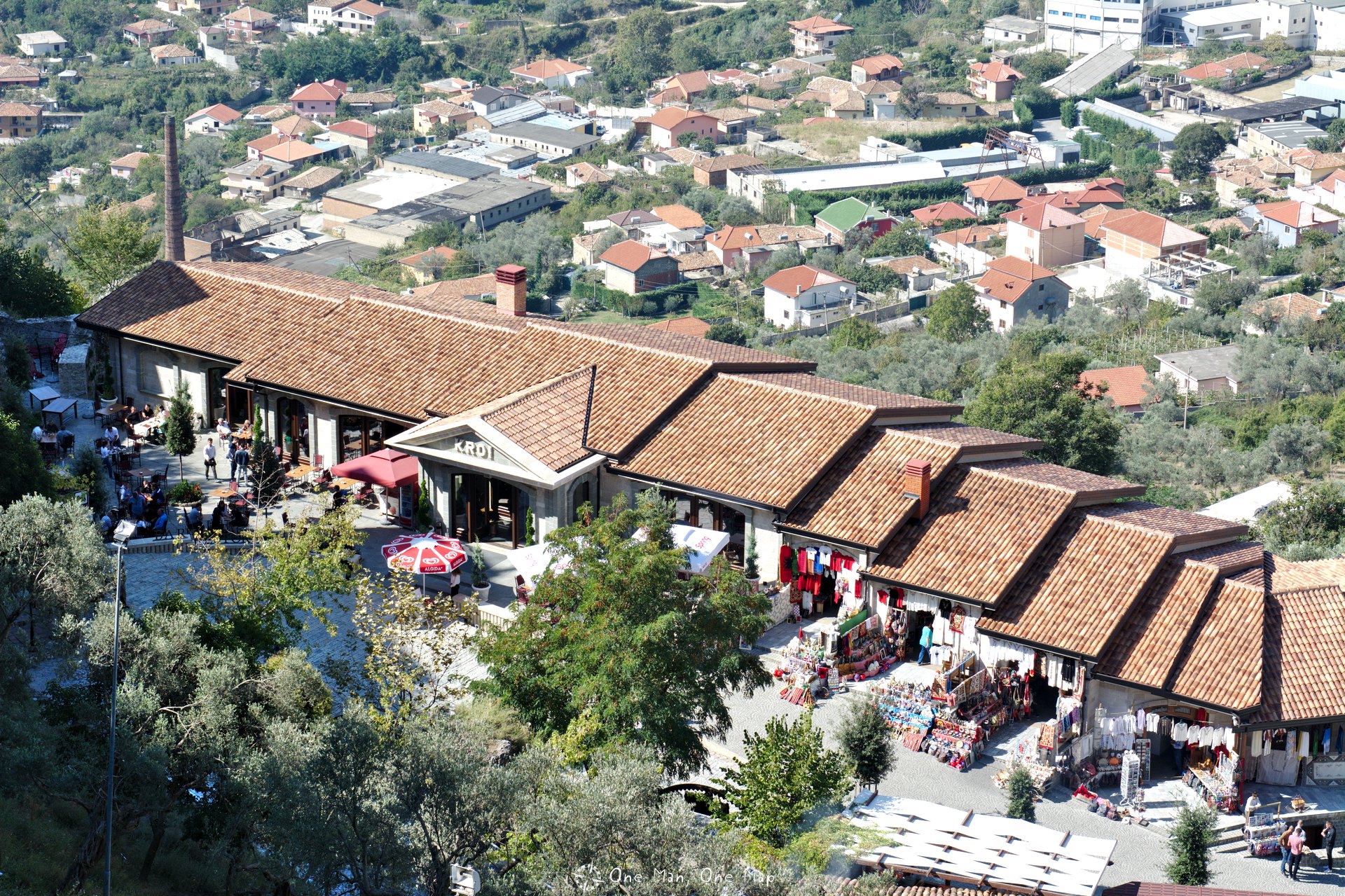 The small market street runs from the town center up to the fortress. The main offerings are craft products from the region such as scarves, wooden figures and more. 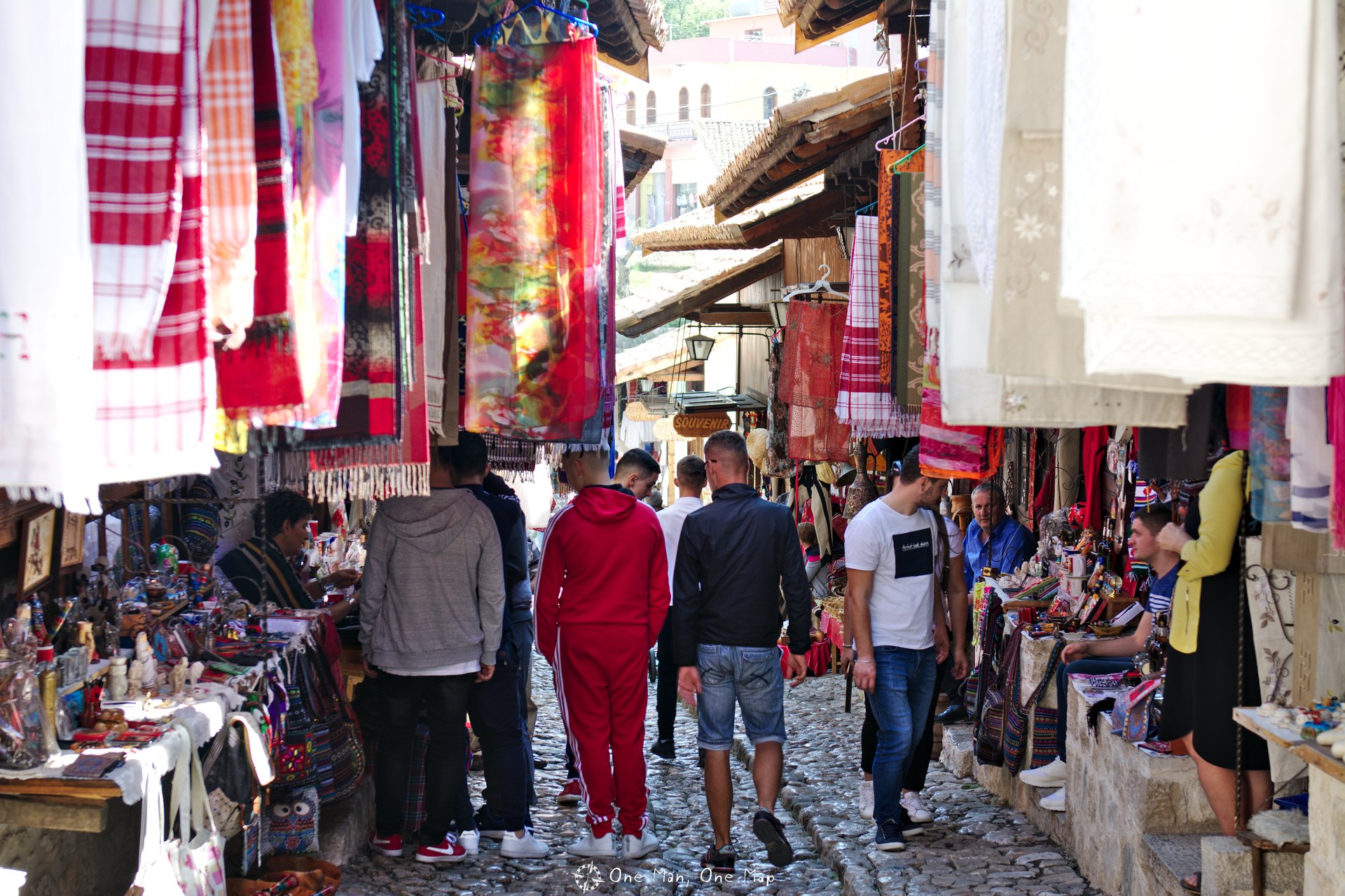 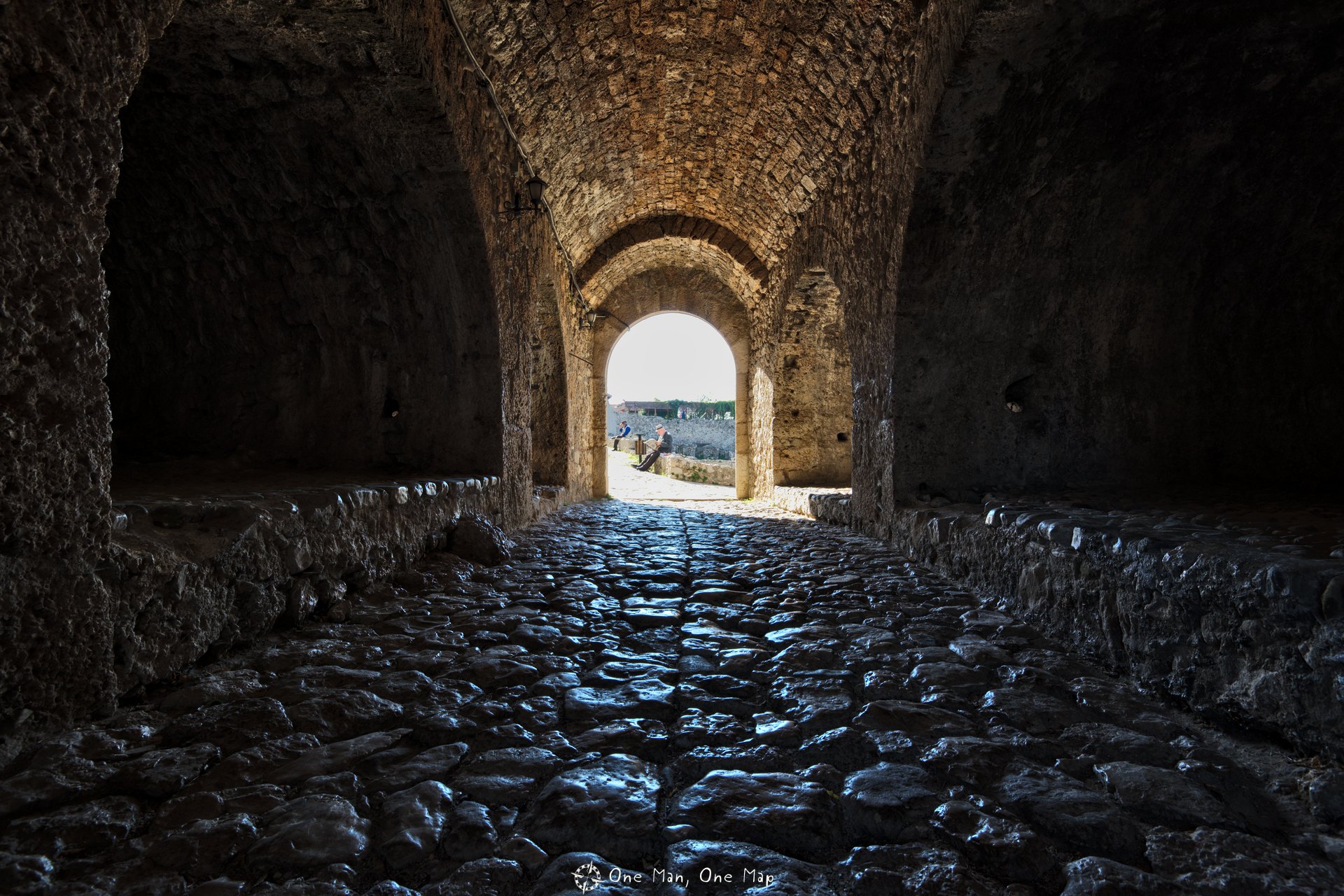 The fortress of Krujë is the center of the whole story about national hero Skanderbeg. The Skanderbeg National Museum (Muzeu Historik Kombëtar “Gjergj Kastriot Skëndërbeu”) stands on its ruins today. It is one of the most visited museums in the country and kept in the style of a medieval tower from northern Albania. Construction and inauguration date back to the regime of communist dictator Enver Hoxha. His daughter Pranvera Hoxha (see also A pyramid for the dictator) was involved in the design phase. 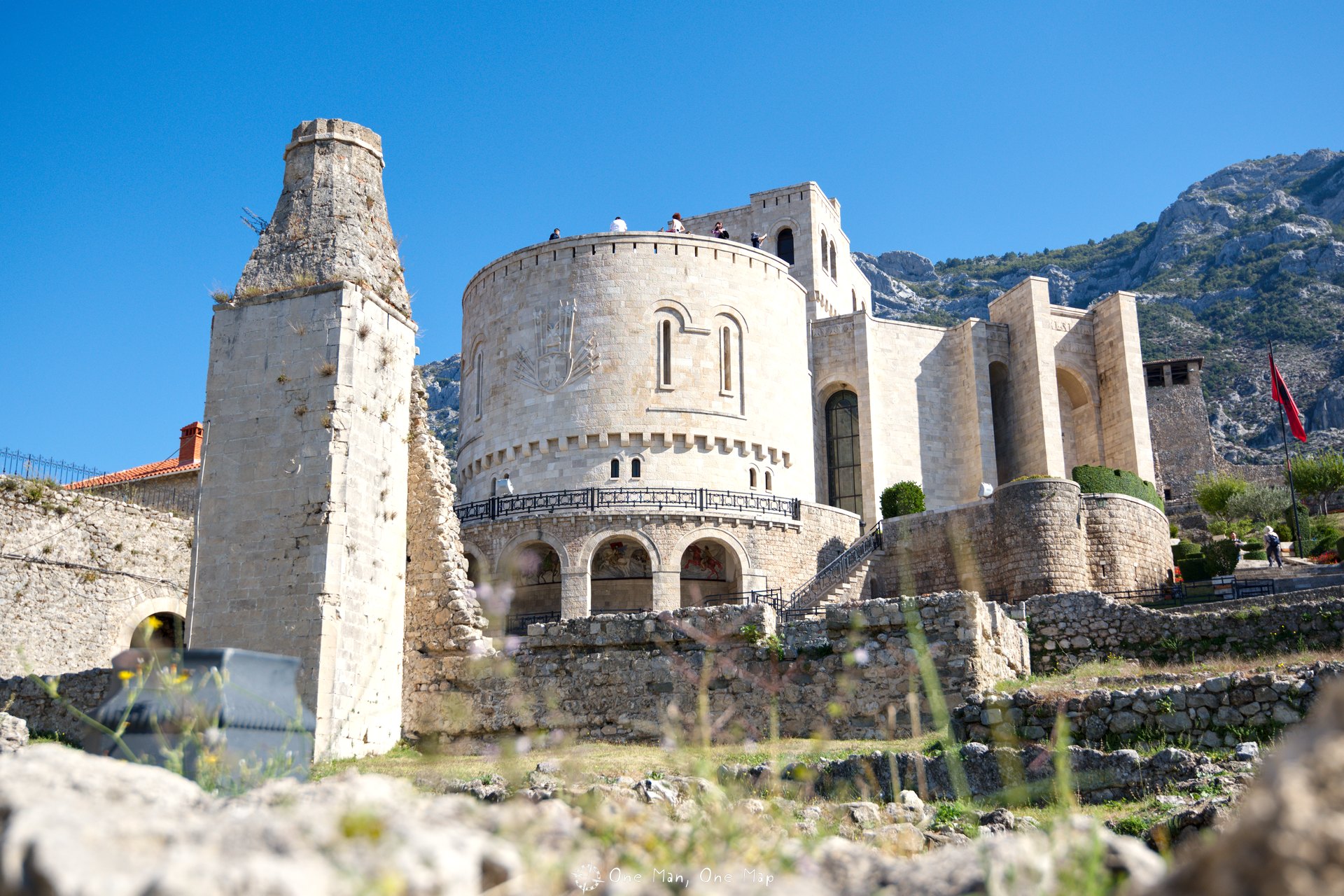 In front of the museum are the remains of the Sultan Mehmed Fatihut Mosque and its minaret. An ethnographic museum and a Turkish bath are located further south. 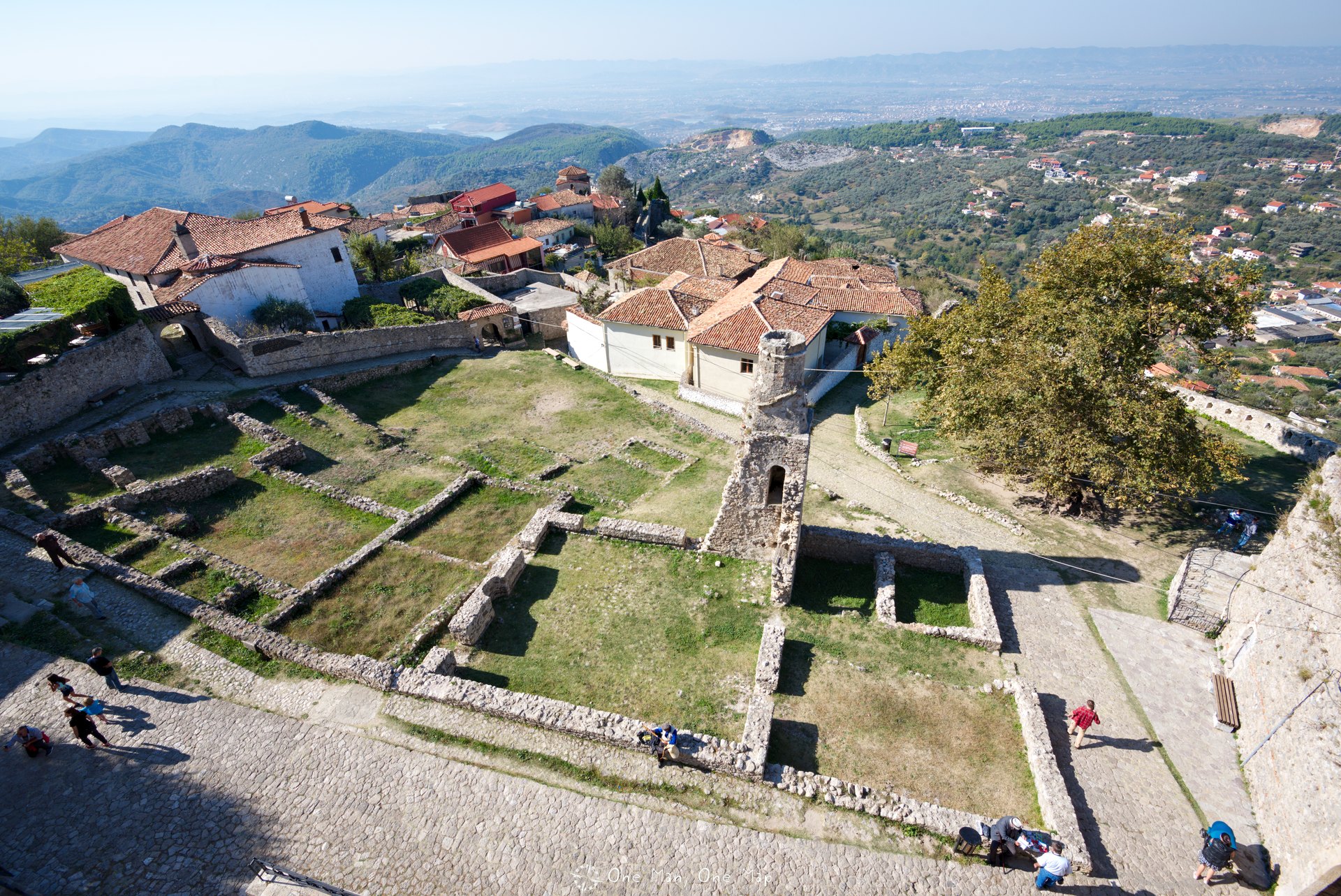 The museum contains artifacts from the era of the national hero, including paintings, armor, documents and much more. But many of them are replicas. The original helmet with the typical goat’s head used by the Kastrioti family can be found in the Kunsthistorisches Museum in Vienna, for example. 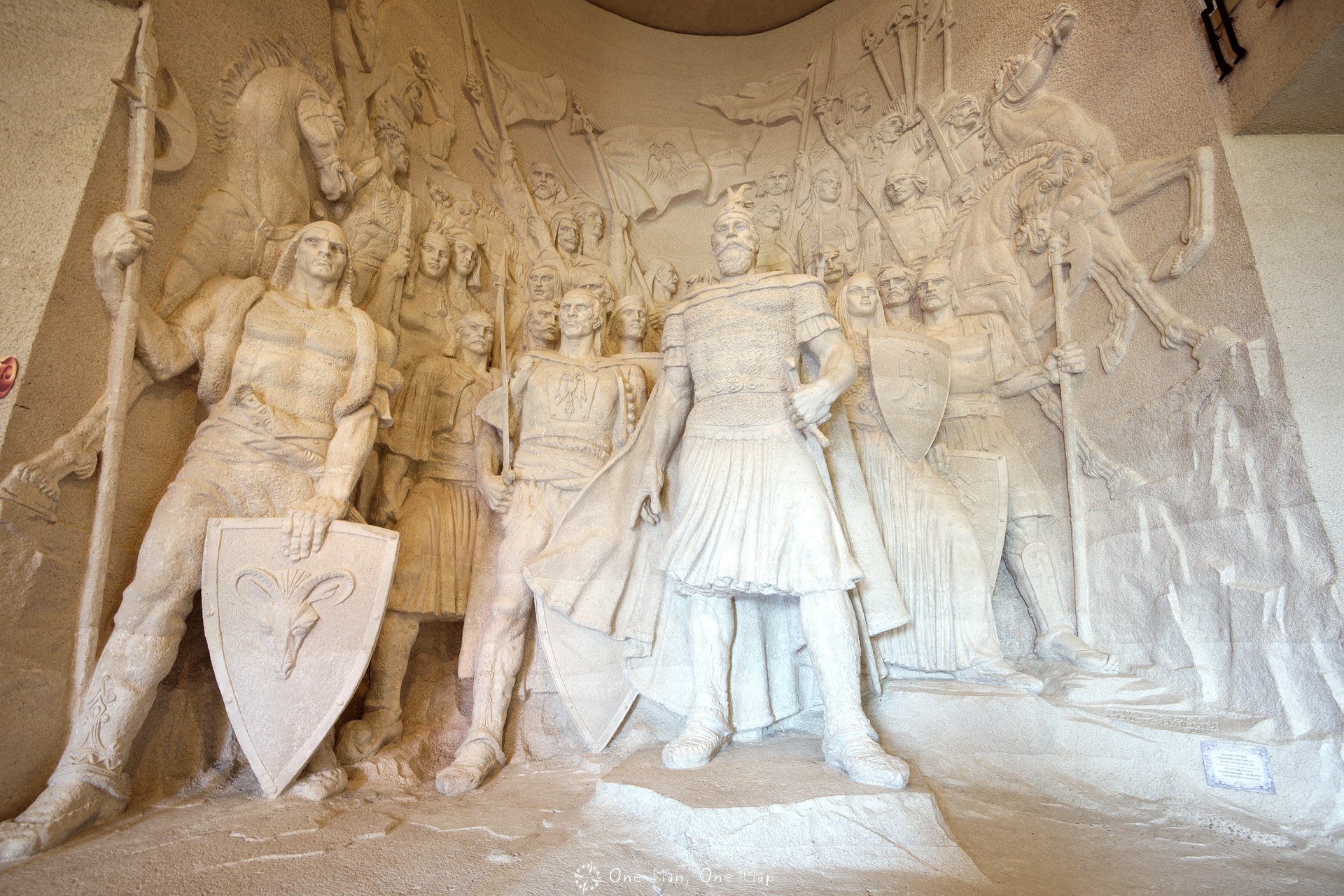 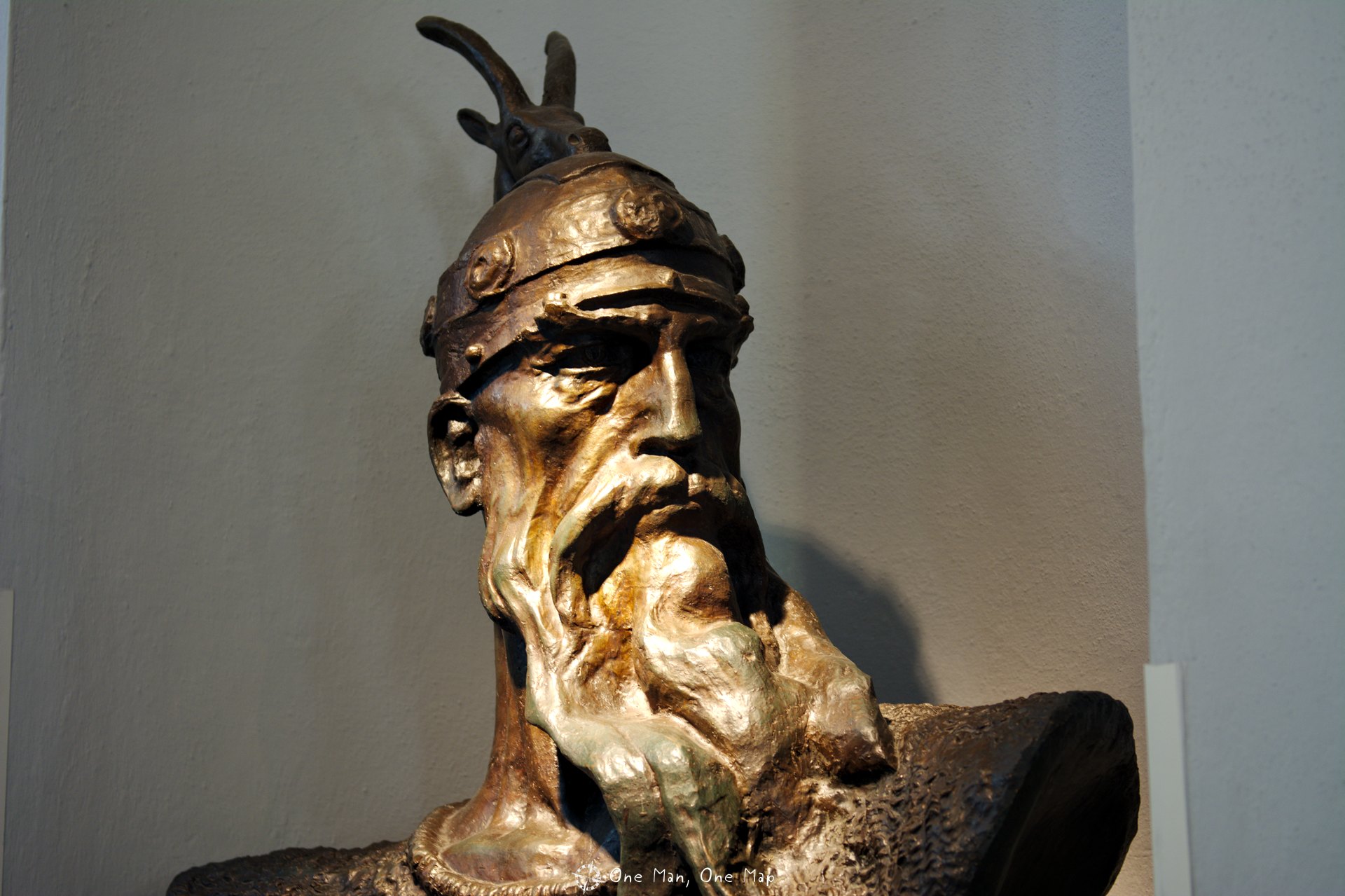 As with most national heroes from the Middle Ages, many details about Skanderbegs life are uncertain. His father Gjon Kastrioti the First owned a principality in the north of present-day Albania around 1400 and had to defend it against the approaching Ottomans. It is often said that Gjon Kastrioti had to submit to Sultan Murad the Second and send his sons to the court in Adrianople (now Edirne) as a pledge, where they were then trained to become Muslim soldiers without knowing about their true origins.

Georg Kastriota, having earned the title of “Iskender Bey” (Turkish for “Alexander the Great”) in the Sultans ranks in the meantime, allegedly learned about his true origins only much later, recaptured his father’s principality with a brave troop of 300 Albanian soldiers, and then defended the fortress of Krujë against the Ottomans for 50 years. One of the heroic battles is pictured in a large panorama painting inside the museum.

Um, well. If the story reminds you a bit of Sparta and the movie “300”, you’re probably not completely wrong. The truth seems to be that the members of the Kastrioti clan were extremely adept at forging alliances and did not even shy away from changing their religion several times to maintain their influence in the region.

Skanderbeg actually went to war for the Turks, so he probably knew their military tactics very well. The rebellion against the Sultan, the reconquest of the Principality of Krujë after the death of his father and three sieges are documented as well. However, only 25 years passed between the uprising against the Ottomans and his death. 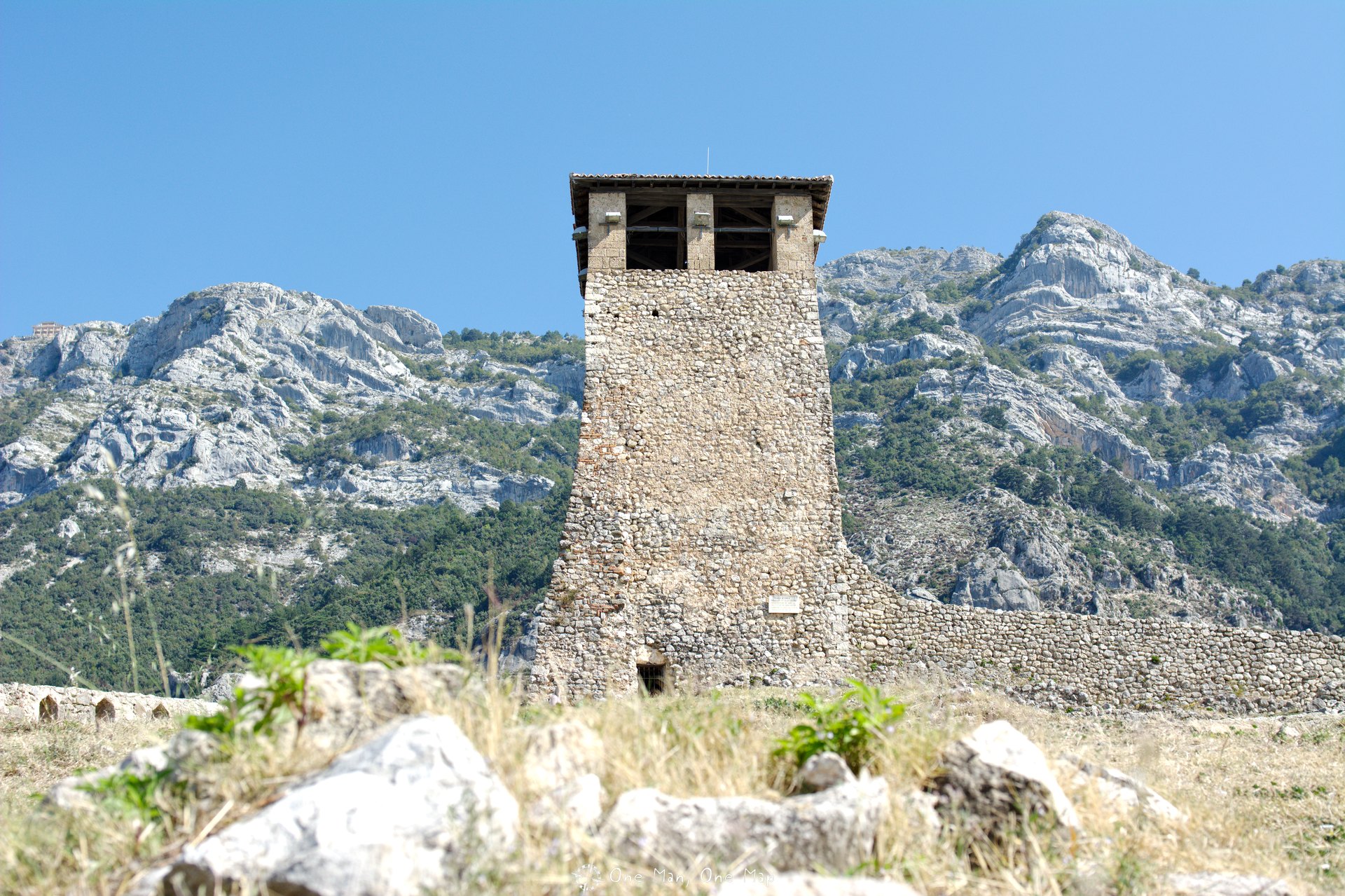 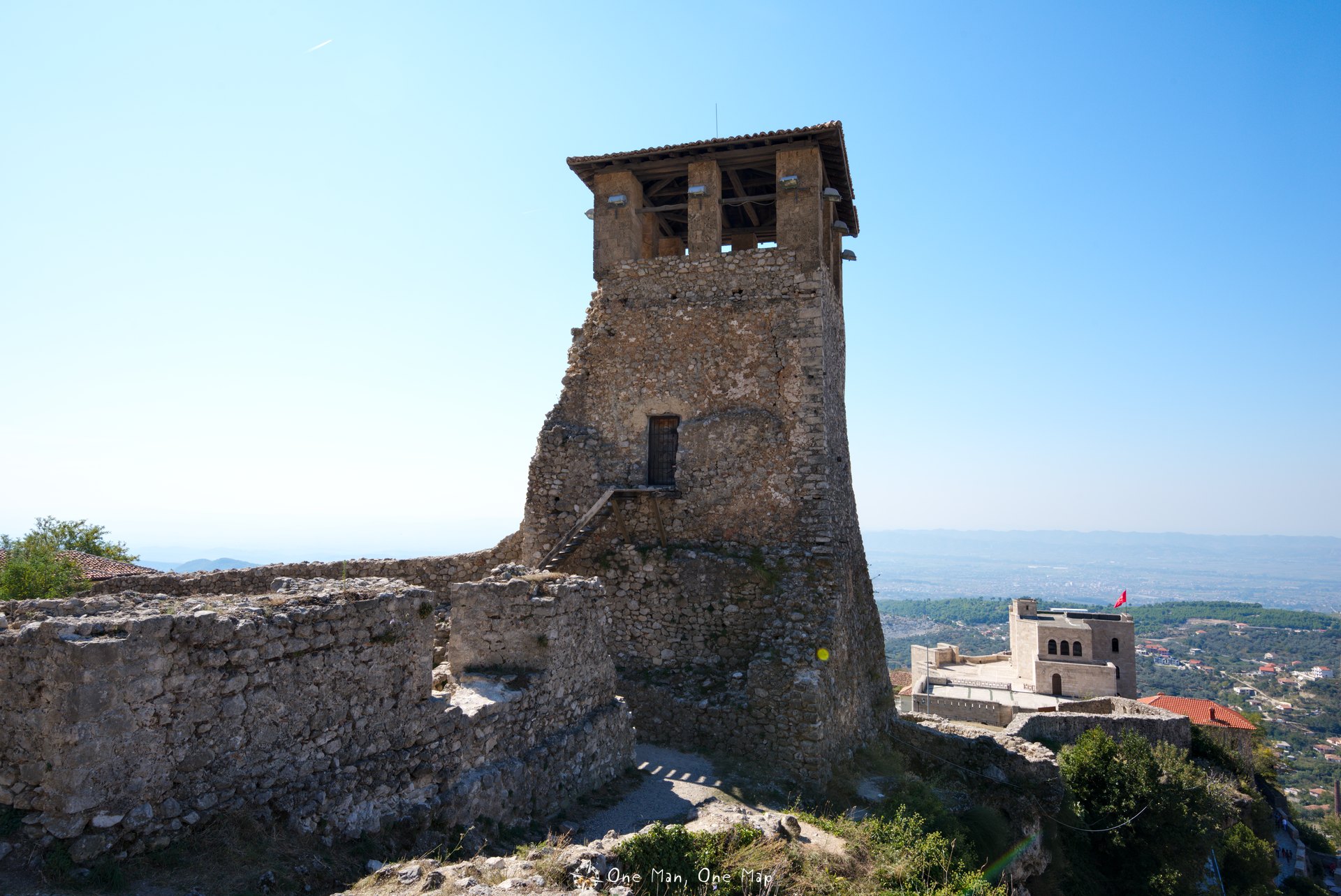 North of the museum there is an old watchtower (Kulla e Kalasë). The old castle walls are also still largely preserved. 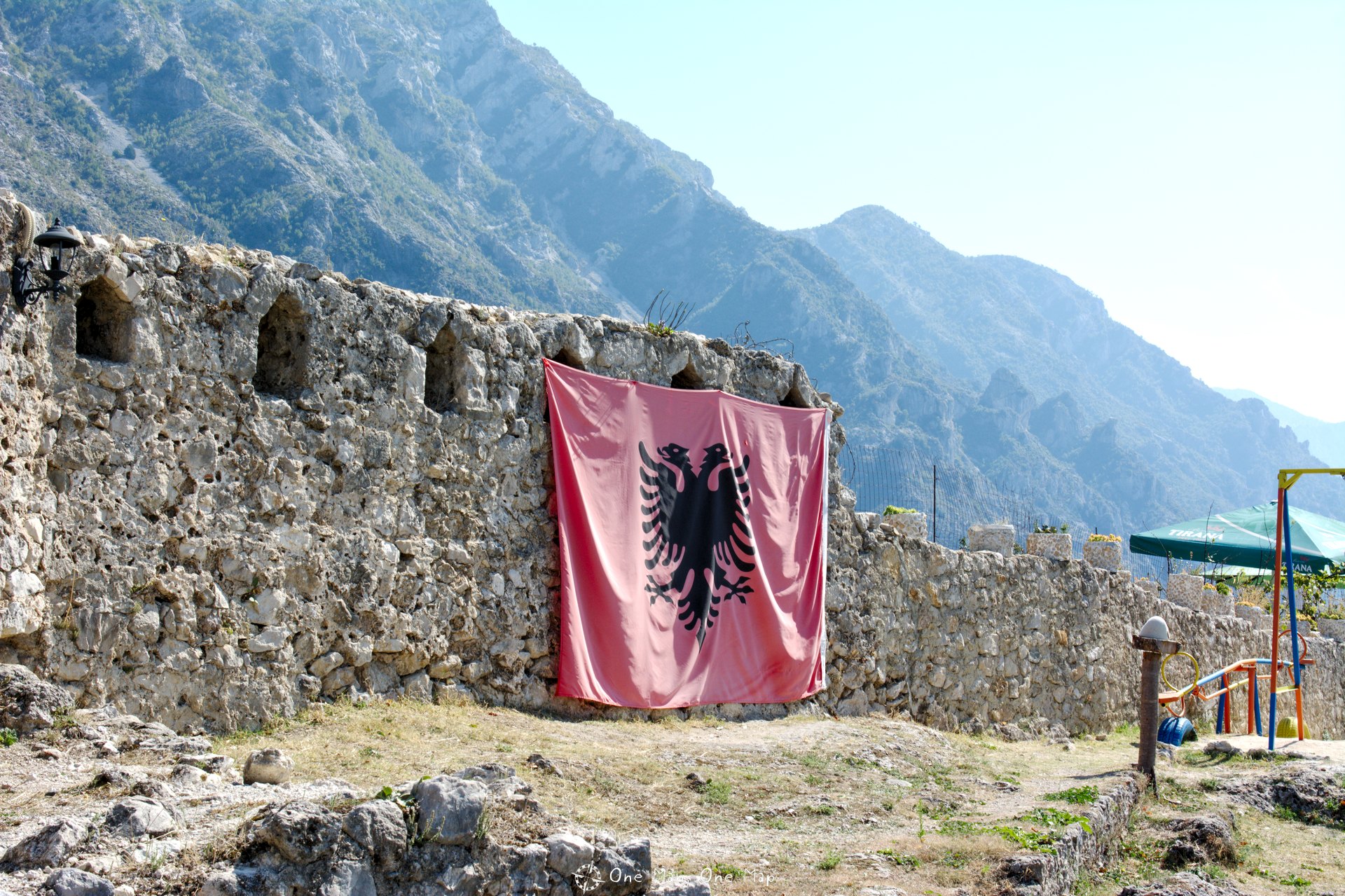 About 100 meters south of the Skanderbeg Museum is the National Ethnographic Museum (Muzeu Kombëtar Etnografic). An old oriental building from the 18th century serves as an exhibition space for typical Albanian artefacts from the 17th and 18th centuries. These include traditional clothing, furniture and cooking utensils of the mountain tribes, as well as farming tools, including a complete stone mill. 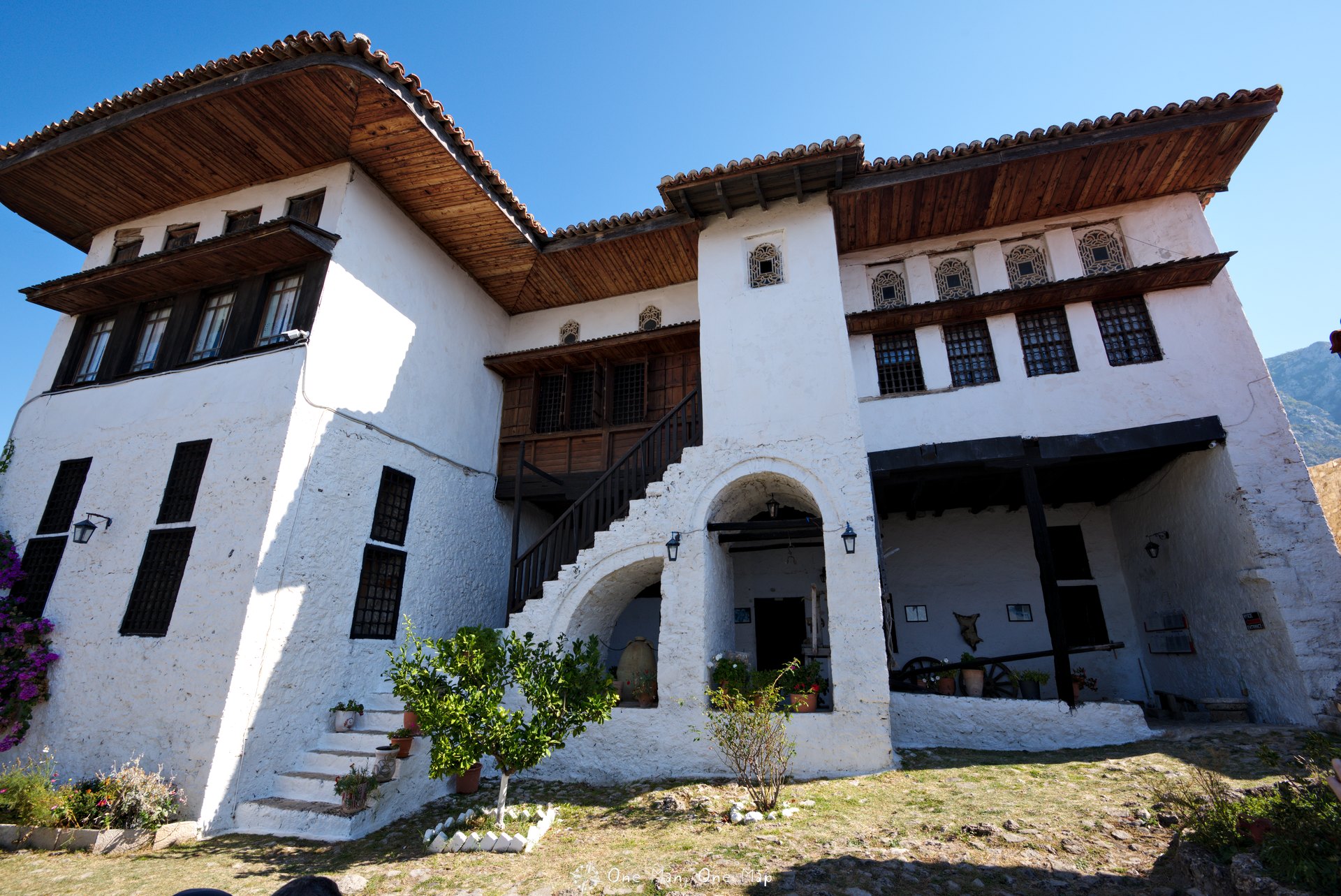 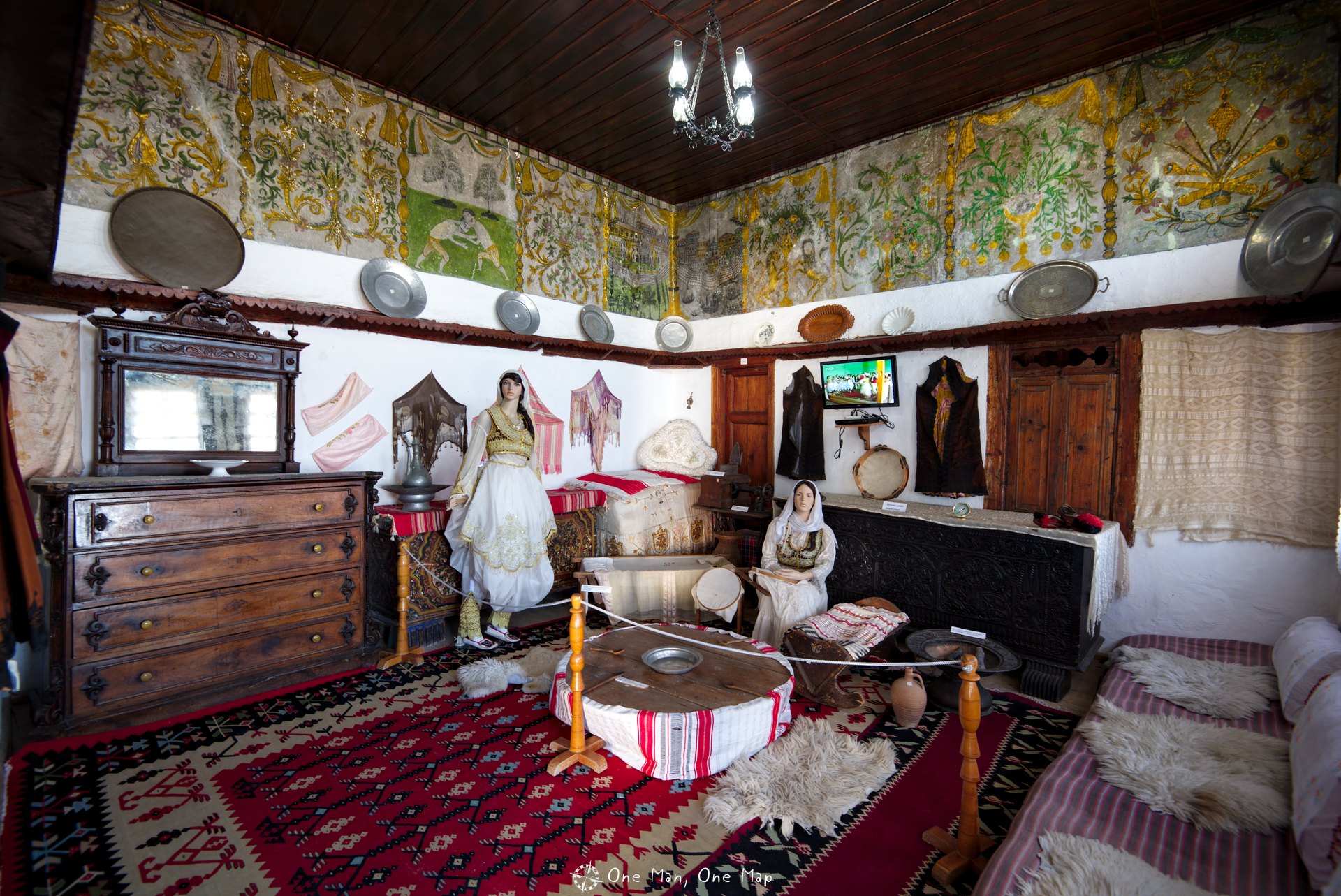 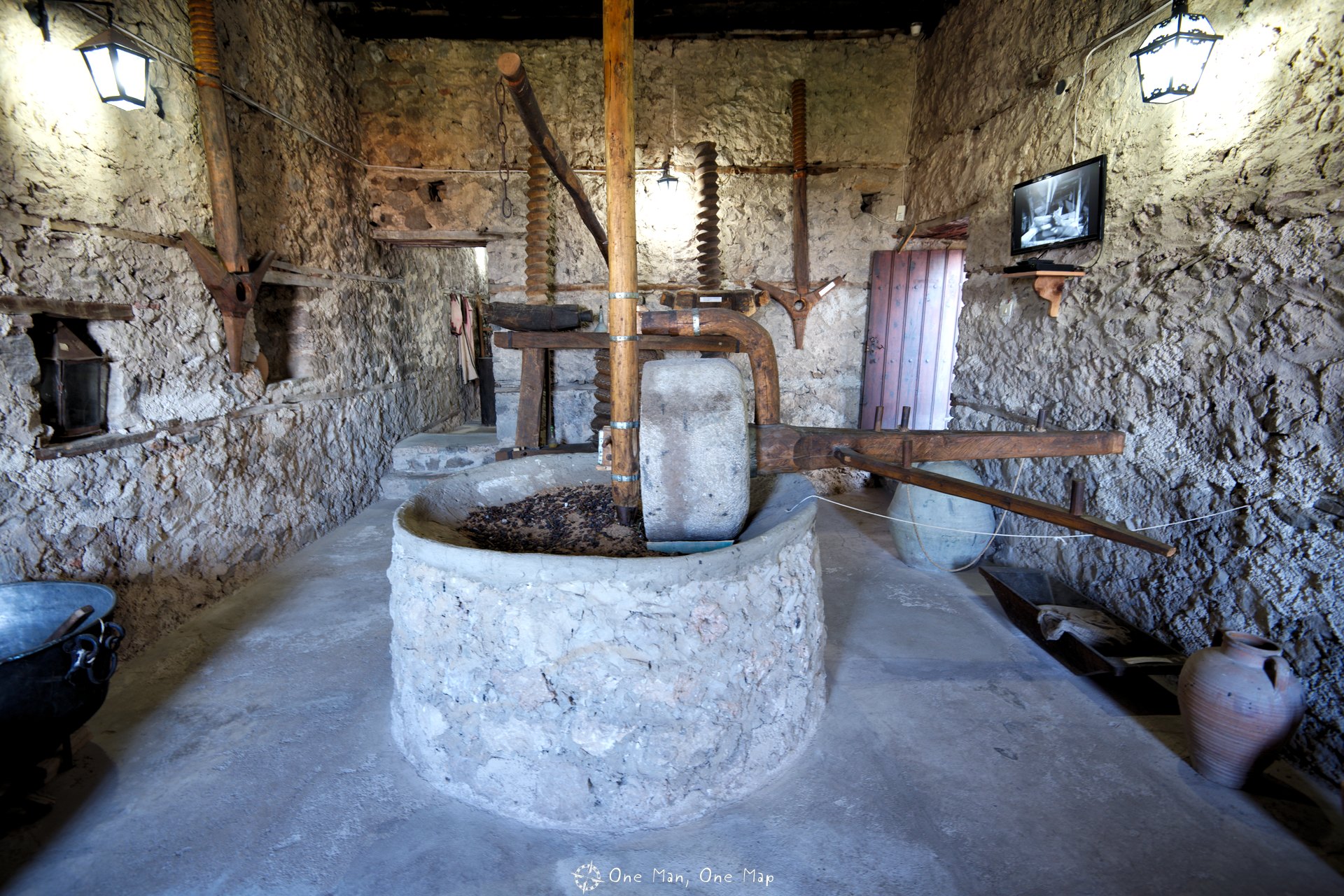 The southern half of the fortress formerly housed the castle settlement. Today private individuals live there. A labyrinth of narrow streets, high walls, bridges, passages and tunnels meanders between the houses. 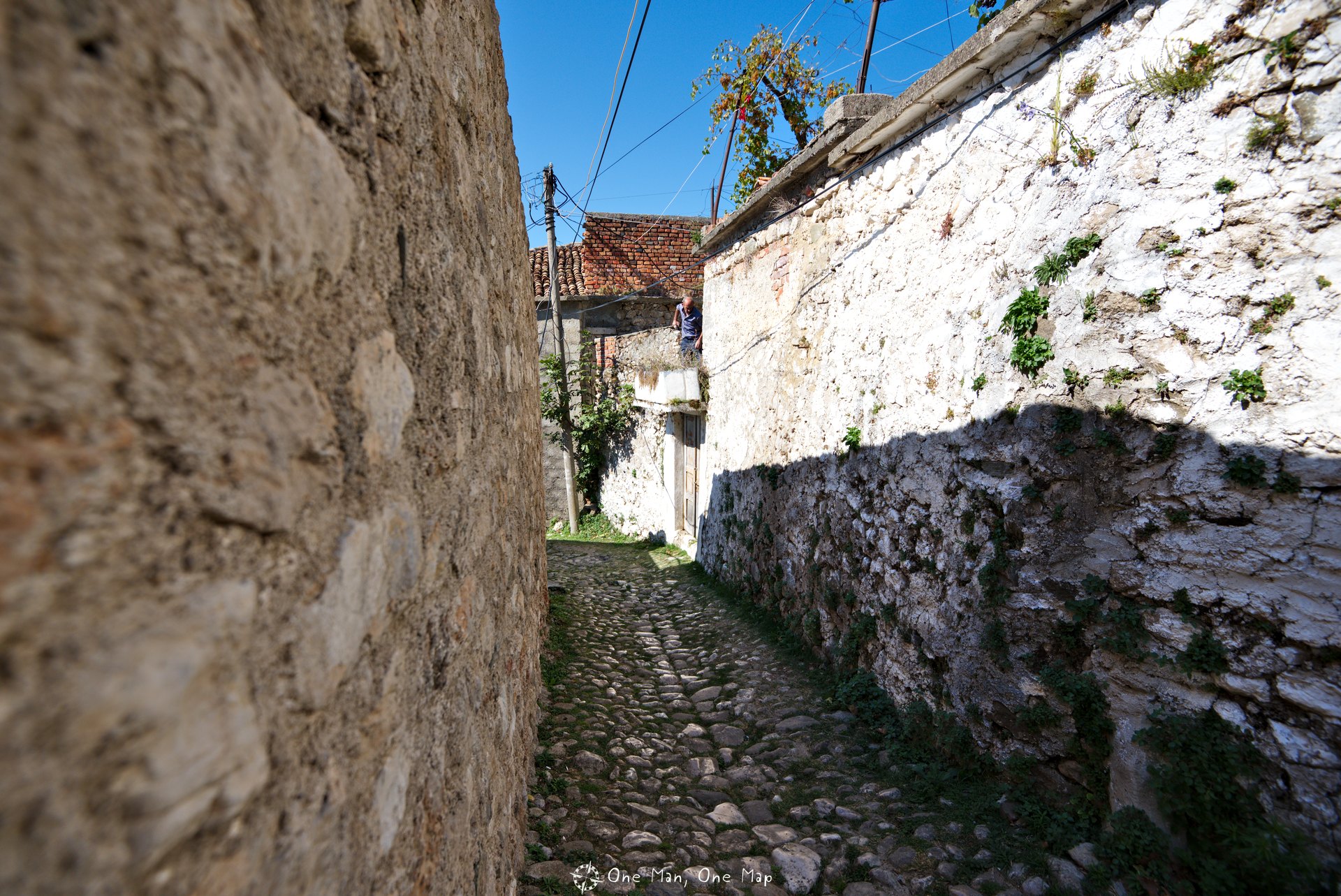 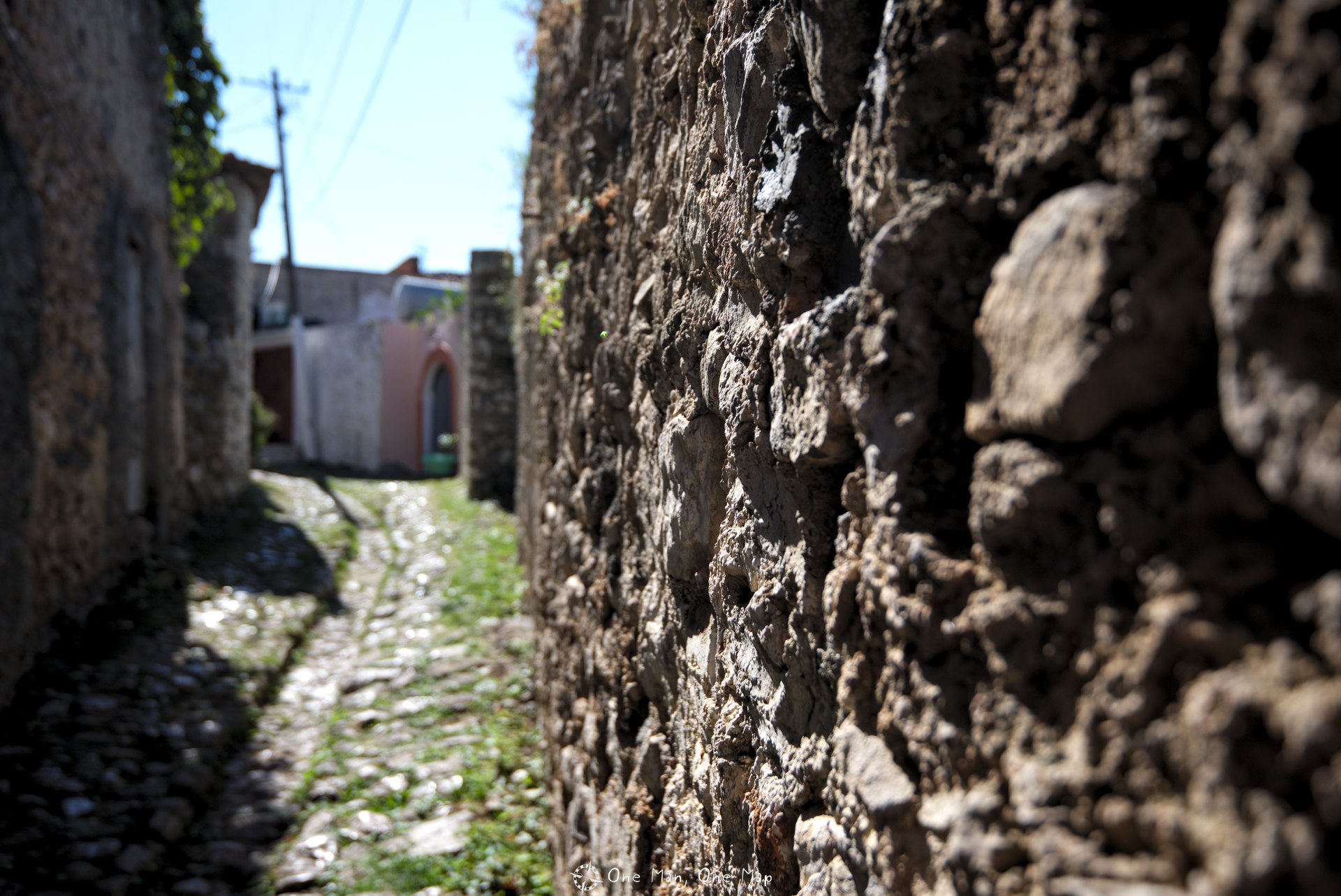 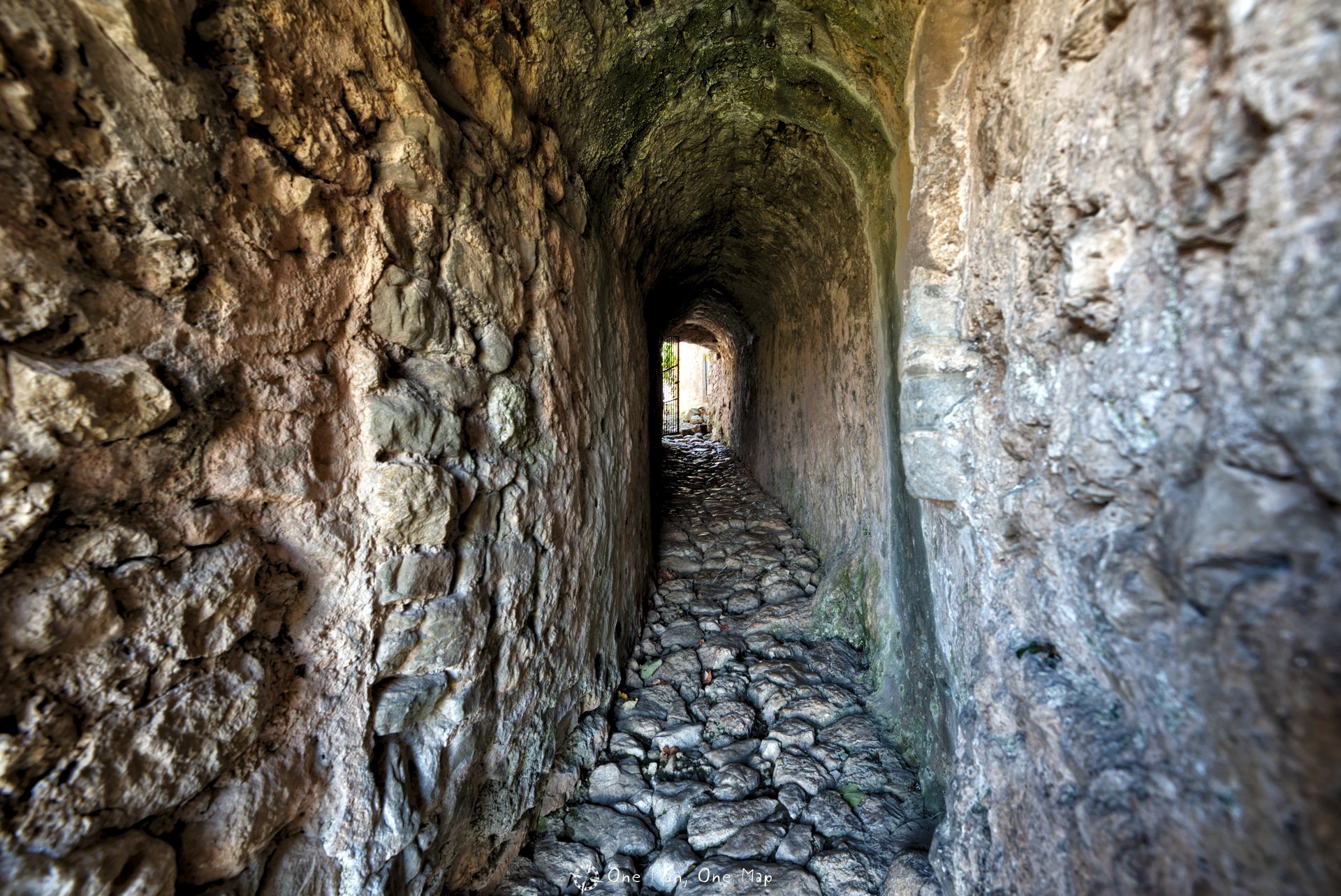 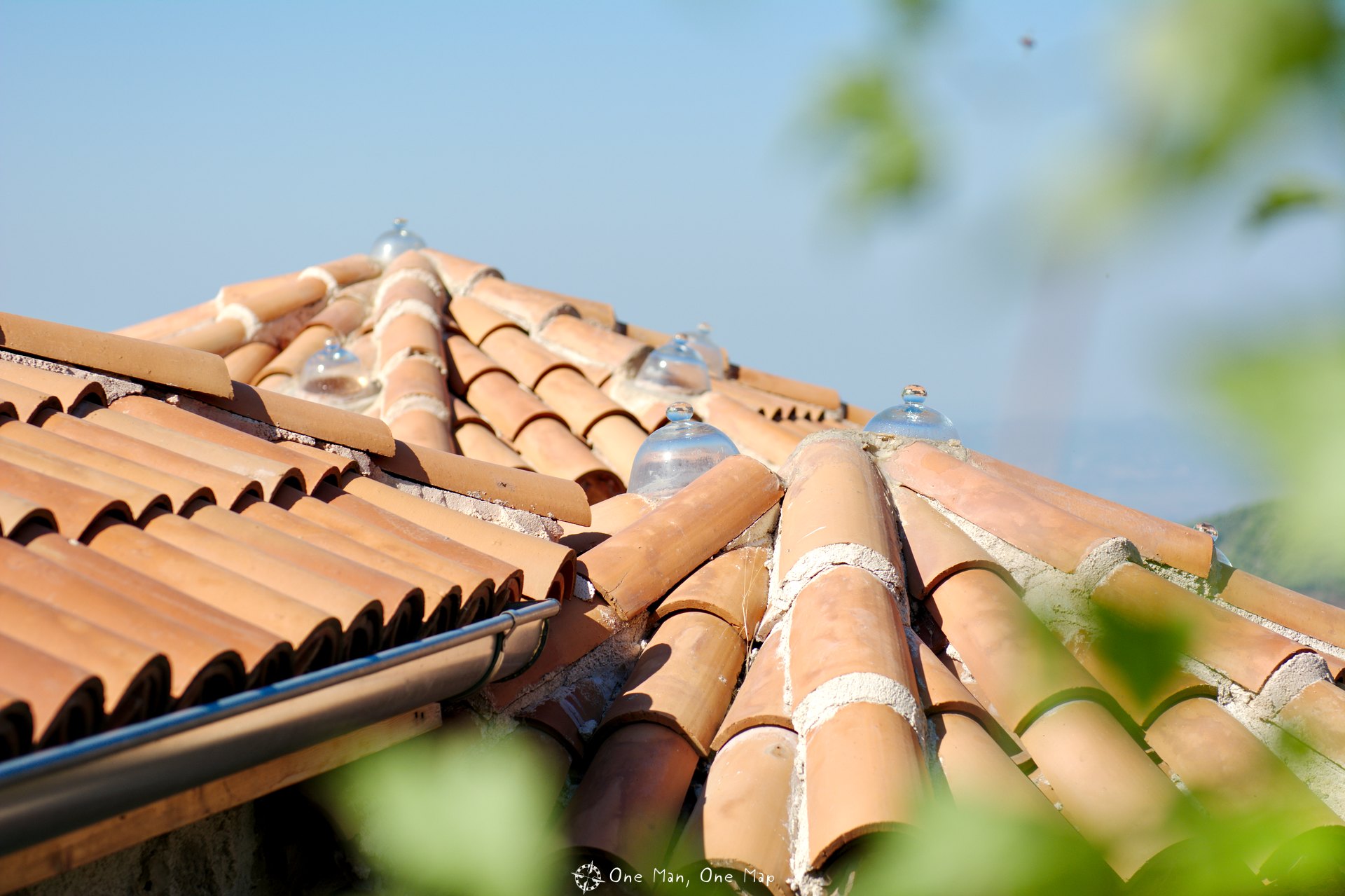 A frequently overlooked attraction in Krujë is the Bektashi Dollmatekke at the south end of the fortress, dedicated to Hahji Mustafa Baba.

The Bektashi Tariqa is one of the largest Islamic movements in Anatolia and the Balkans. A Tekke serves for practicing the faith, but in contrast to a mosque it can also be used to study or for receiving and catering to guests. The Dollmatekke in Krujë even has a working bread oven. 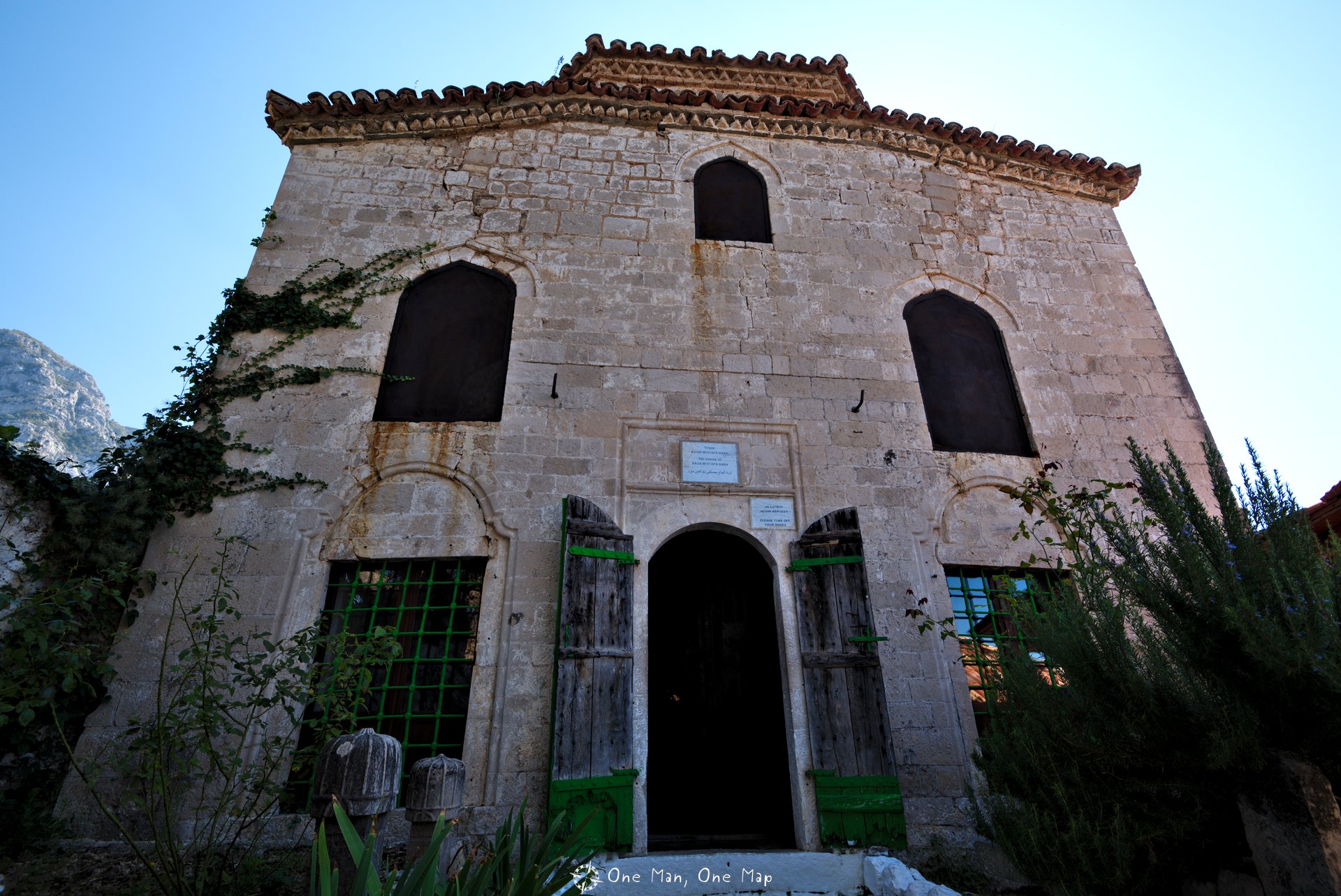 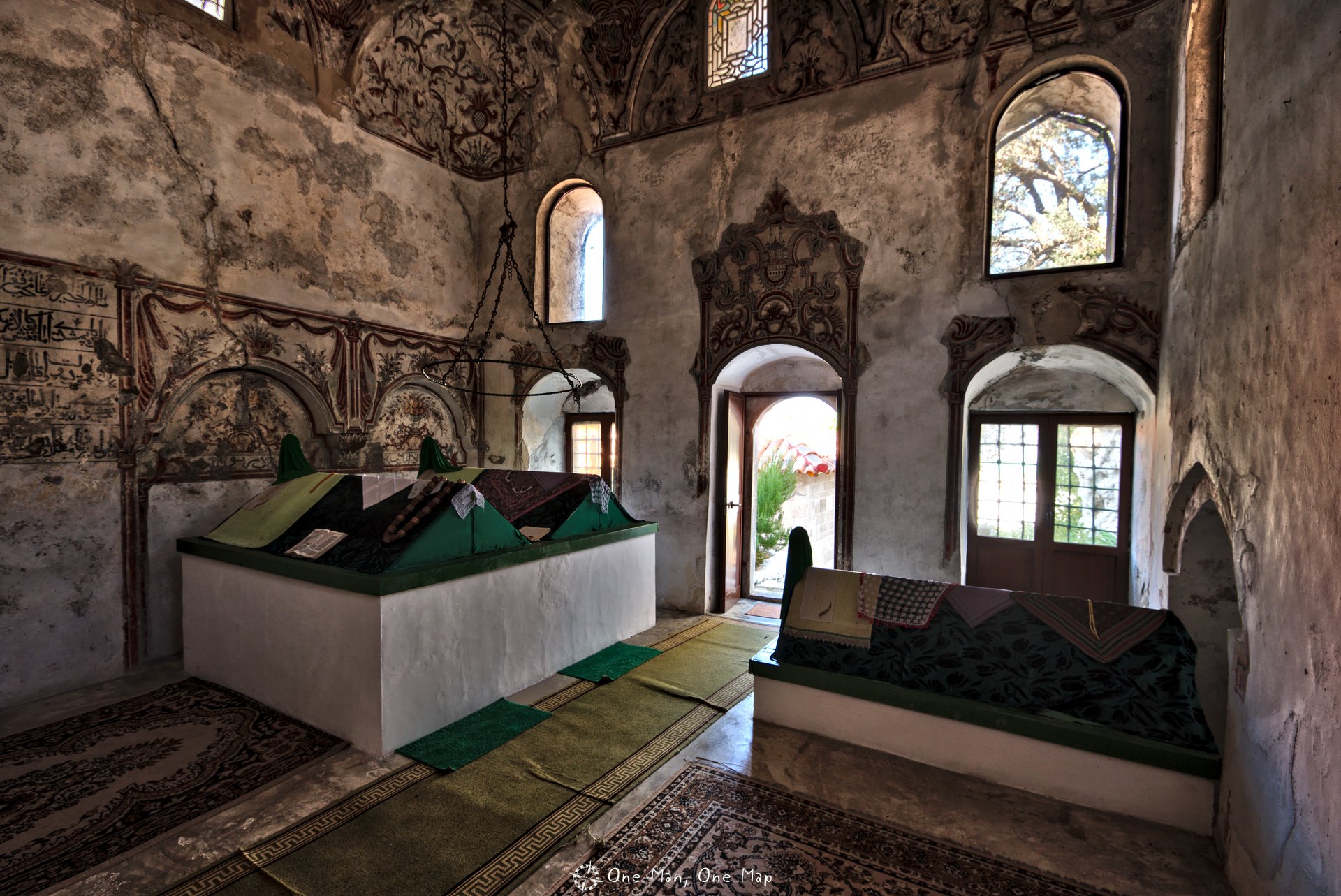 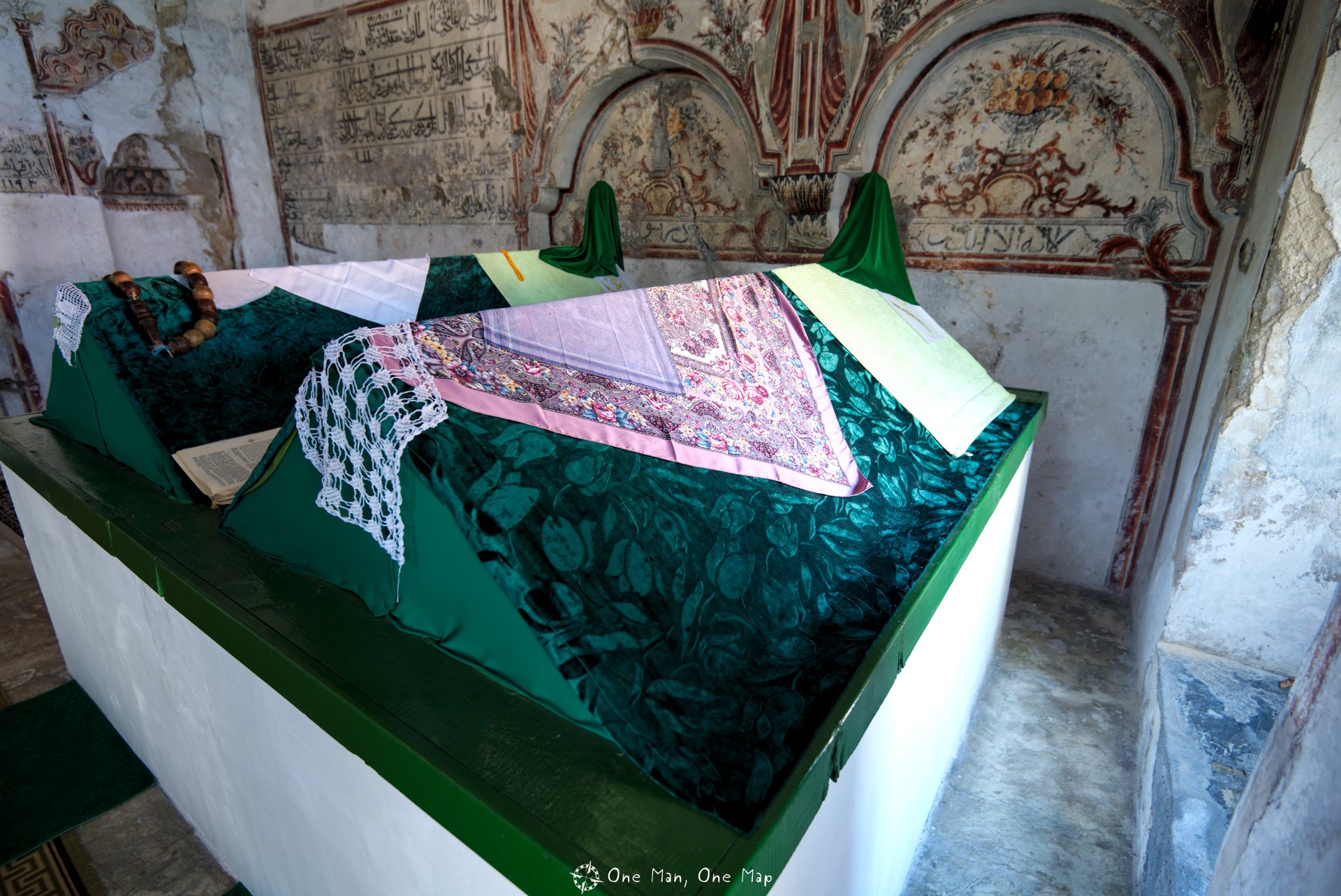 There are several graves of Bektaschi dignitaries n the beautifully decorated interior, and the garden houses several more graves.

Dictator Hoxha banned all religions in 1967 and thus all Tekke were closed. In 1990 this one was the very first to be reopened in all of Albania. A small group of volunteers maintain the area. 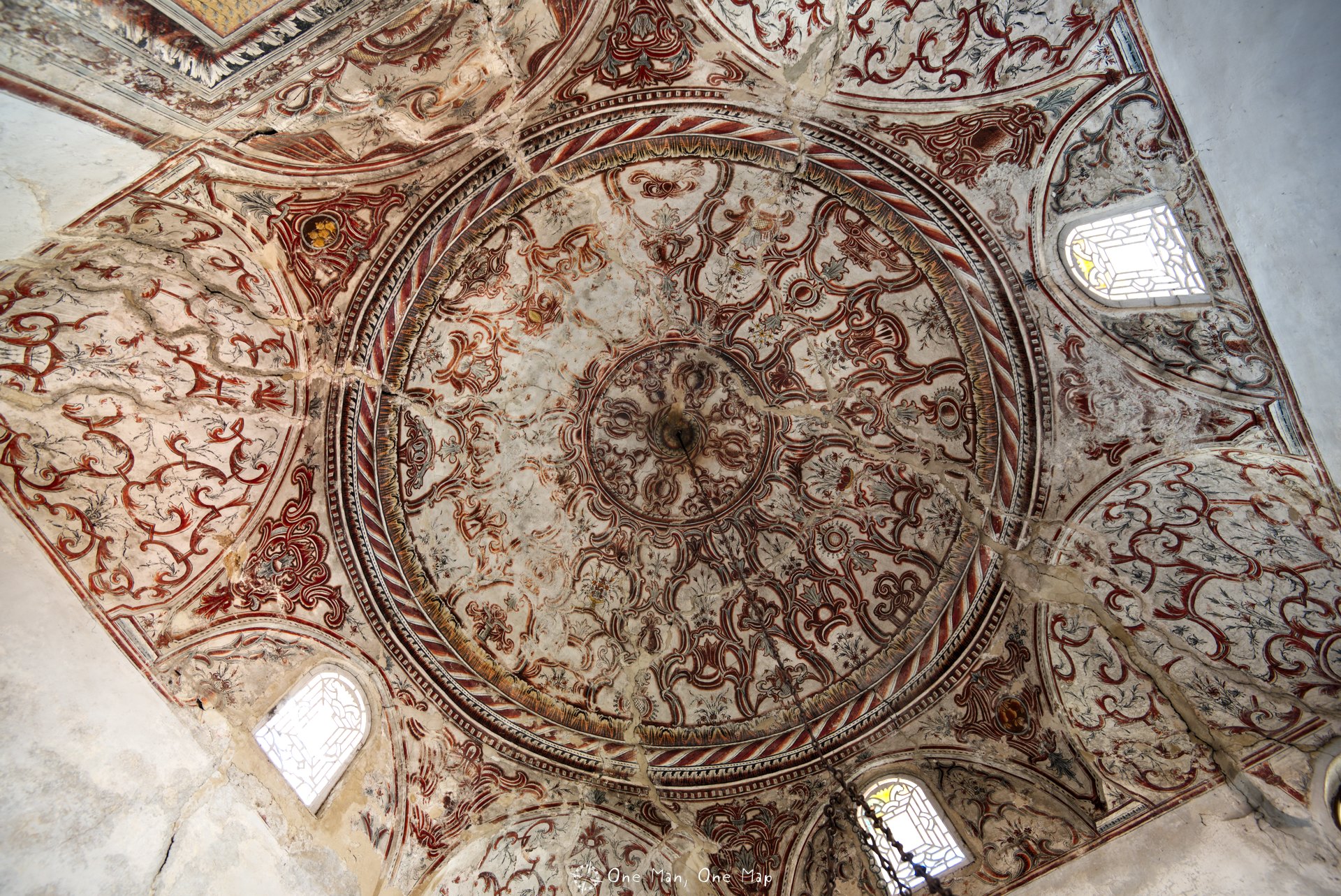 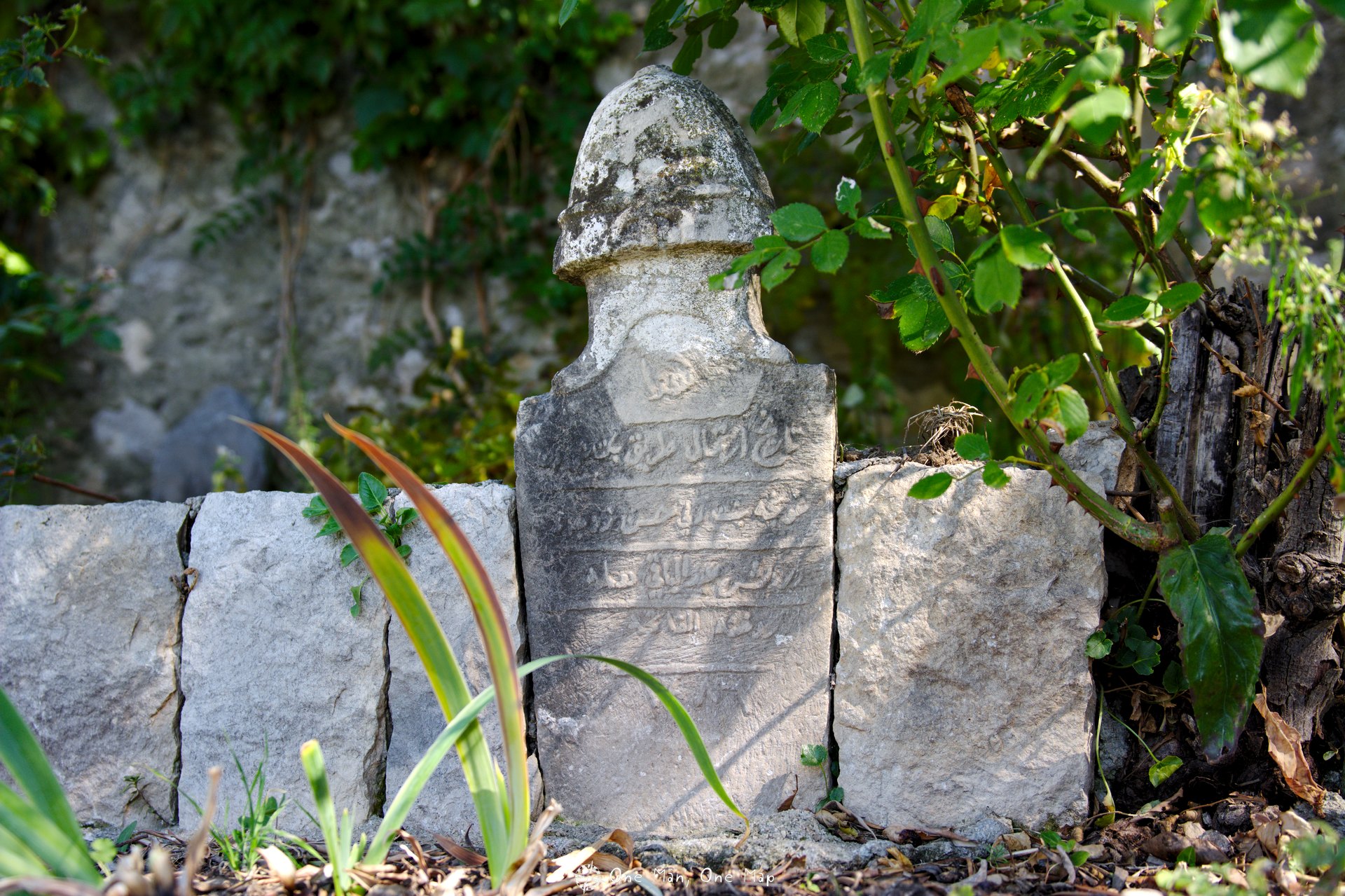 Don’t miss the next post if you’re interested in Lost Places! I am going to take you into Albanias 170,000+ bunkers…