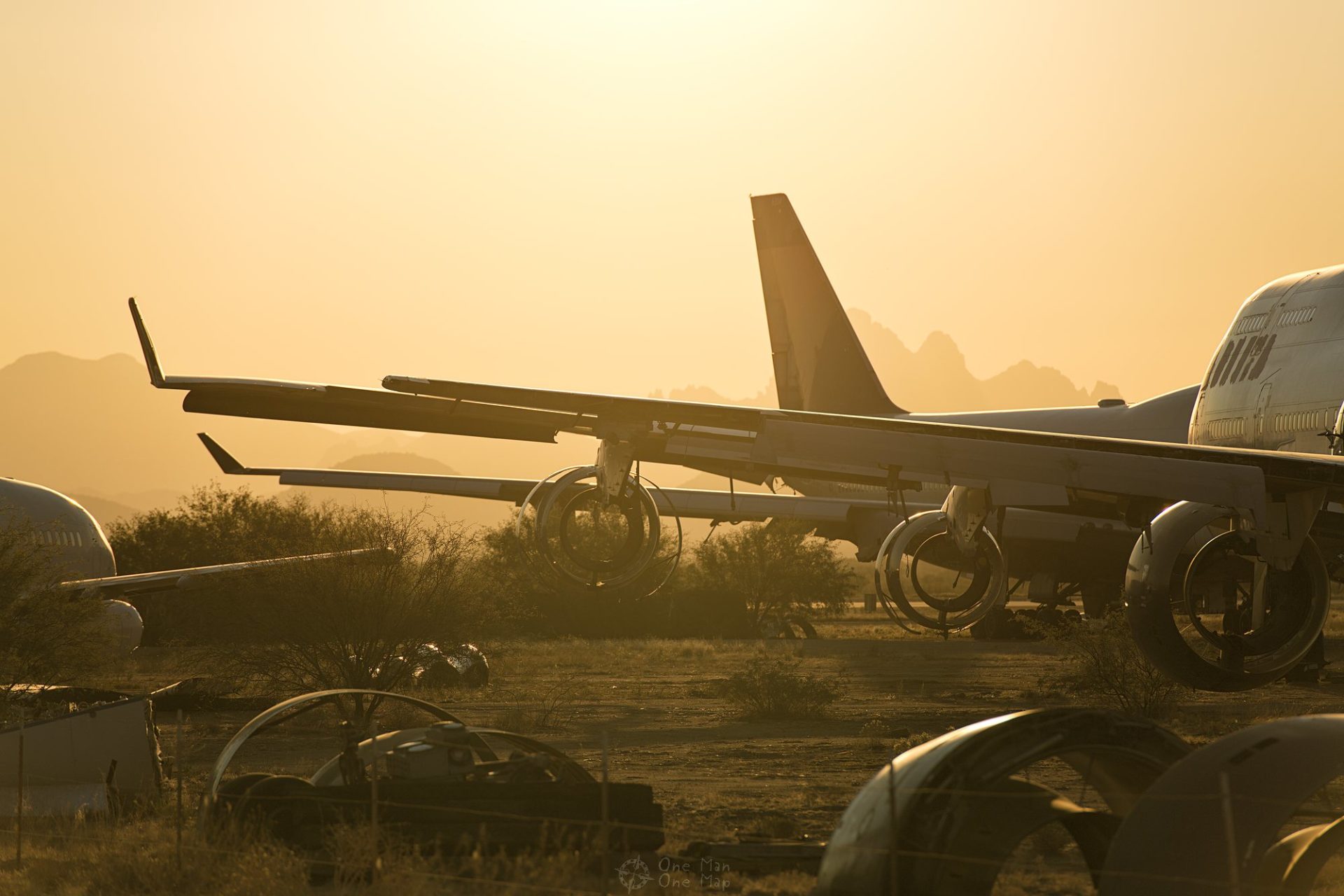 Arizona is the second-driest US state. The winters are mild, the summers extremely hot. Best conditions for… aircraft graveyards and open-air museums! 😉

The airlines and armed forces of this world have a really big problem: Every year thousands of planes have to be shut down and/or scrapped. Unlike in the world of cars, you can’t just turn to the junkyard next door. A “small” fighter jet such as the Eurofighter or an F-18 “Hornet” is already nearly 20 meters long, airliners have wingspans of up to 70 meters.

In the United States, the need for storage space and scrapping possibilities is particularly important. The country’s airlines operate a quarter of all commercial aircraft worldwide, the US Armed Forces have the largest Air Force in the world. What can’t be donated to a museum has to be parked somewhere else. At old military airports in the southern US states, for example. Land is cheap, the dry climate conserves the machines for possible later use, and runways for delivery are already in place.

California, Arizona and New Mexico have a total of seven large aircraft graveyards. Two of them are located near Tucson, Arizona, and the Pima Air and Space Museum – one of the largest aviation museums in the world – is also located there. Tucson is therefore the perfect starting point for a small photo tour 🙂

The Pima Air Space Museum is one of the largest aviation museums in the world. Since its foundation in 1976, the museum’s collection has grown continuously to more than 350 exhibits.

The entrance fee is currently 16.50 US-$ for adults and 10 US-$ for children. Three to four hours are recommended for a visit, as there are several computer simulators and a separate exhibition hall on the subject of “space” to visit in addition to the exhibits. 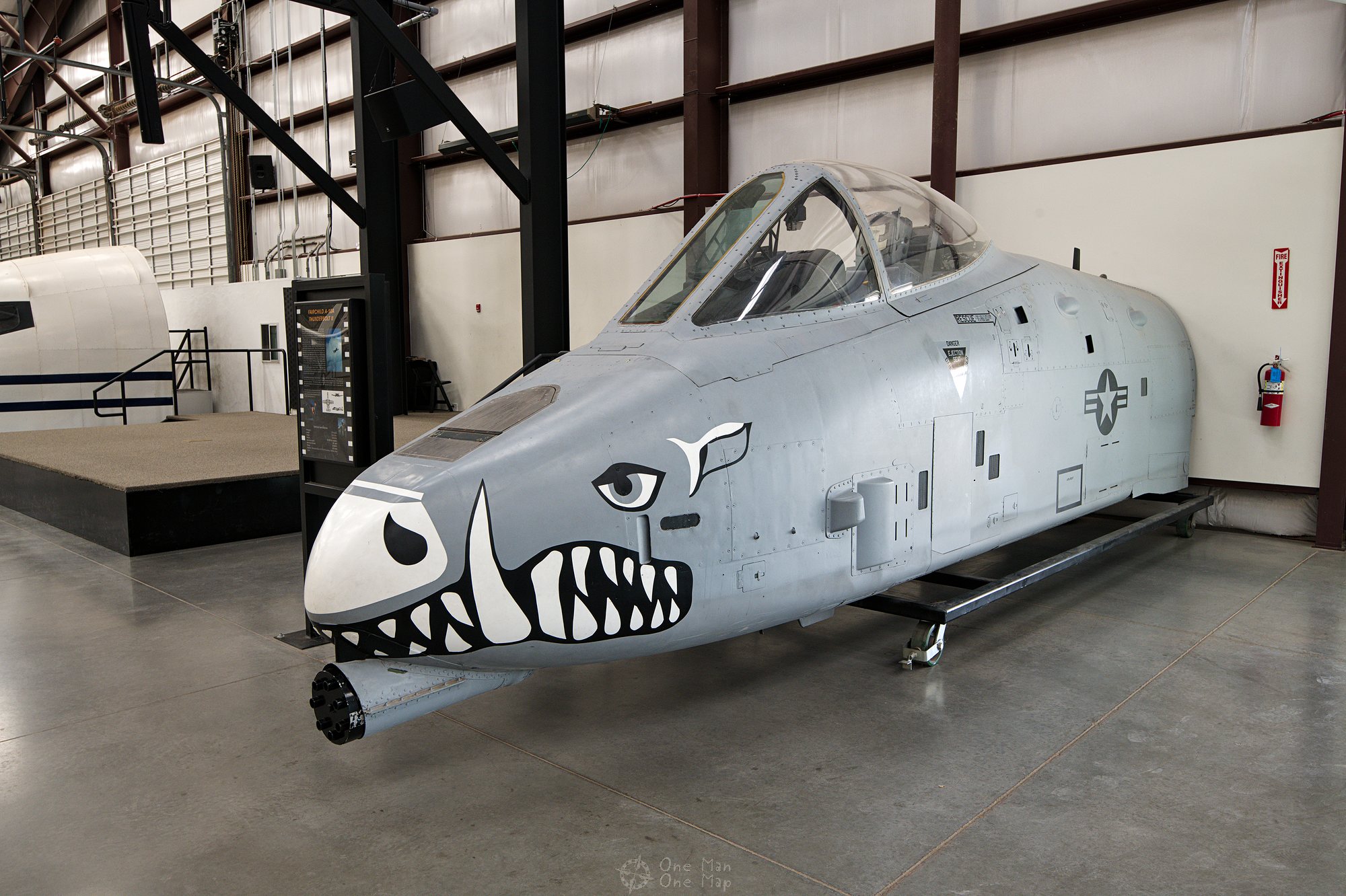 The majority of the aircraft on display are located outdoors, only a few are housed in hangars. The outdoor areas are sorted by theme: Transport aircrafts, fighter aircrafts, scheduled aircrafts, special NASA aircrafts, and so on. The Boeing B-17 “Flying Fortress” even has its own hangar.

The museum is located close to Davis-Monthan Air Force Base. During my visit fighter planes and combat helicopters flew over the area again and again. The Air Force Base was formerly responsible for the operation of the 18 Titan II nuclear rocket silos stationed around Tucson. The Pima Air and Space Museum therefore also operates the Titan II Missile Museum in Sahuarita, about 40 kilometers away. 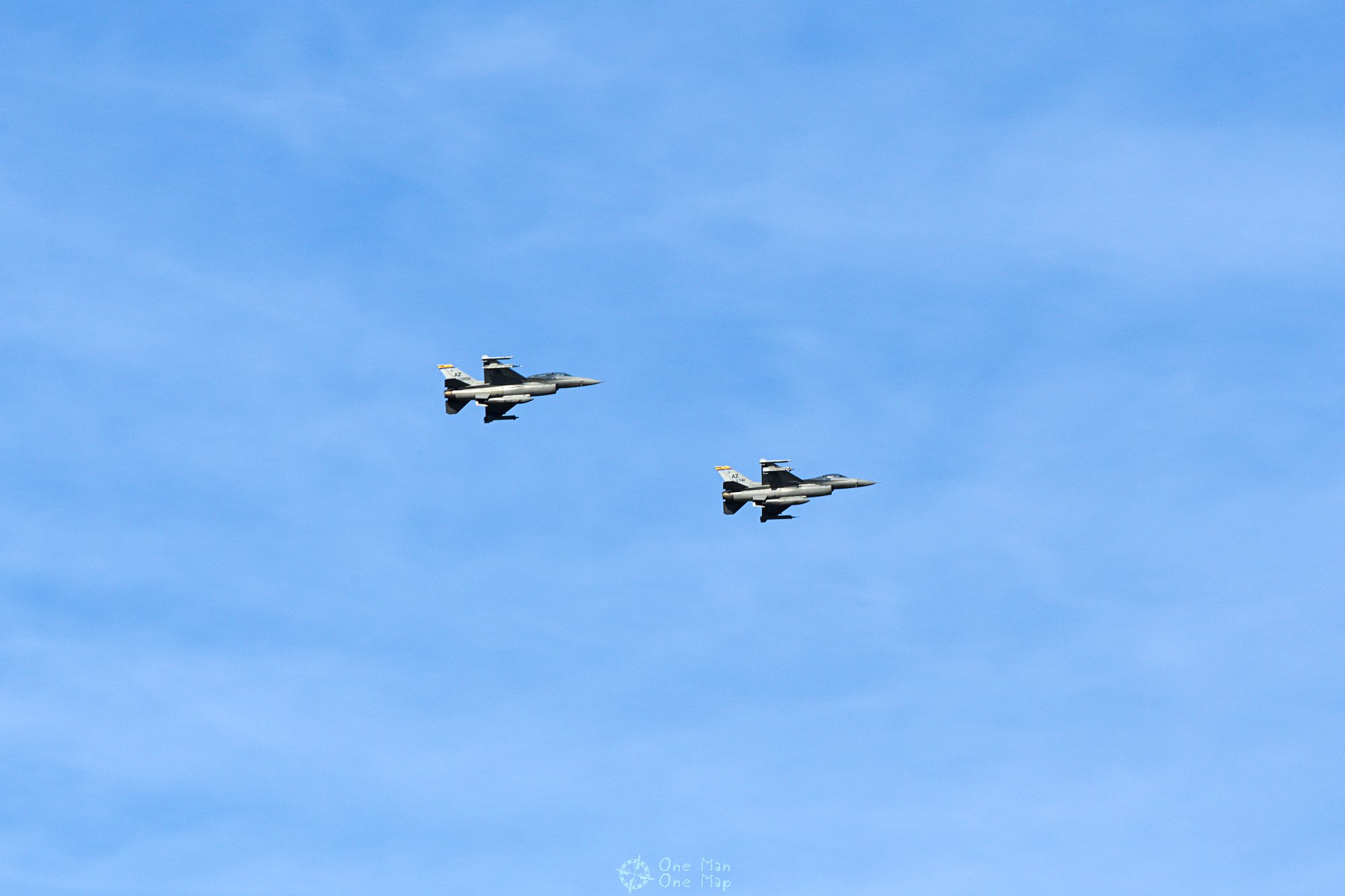 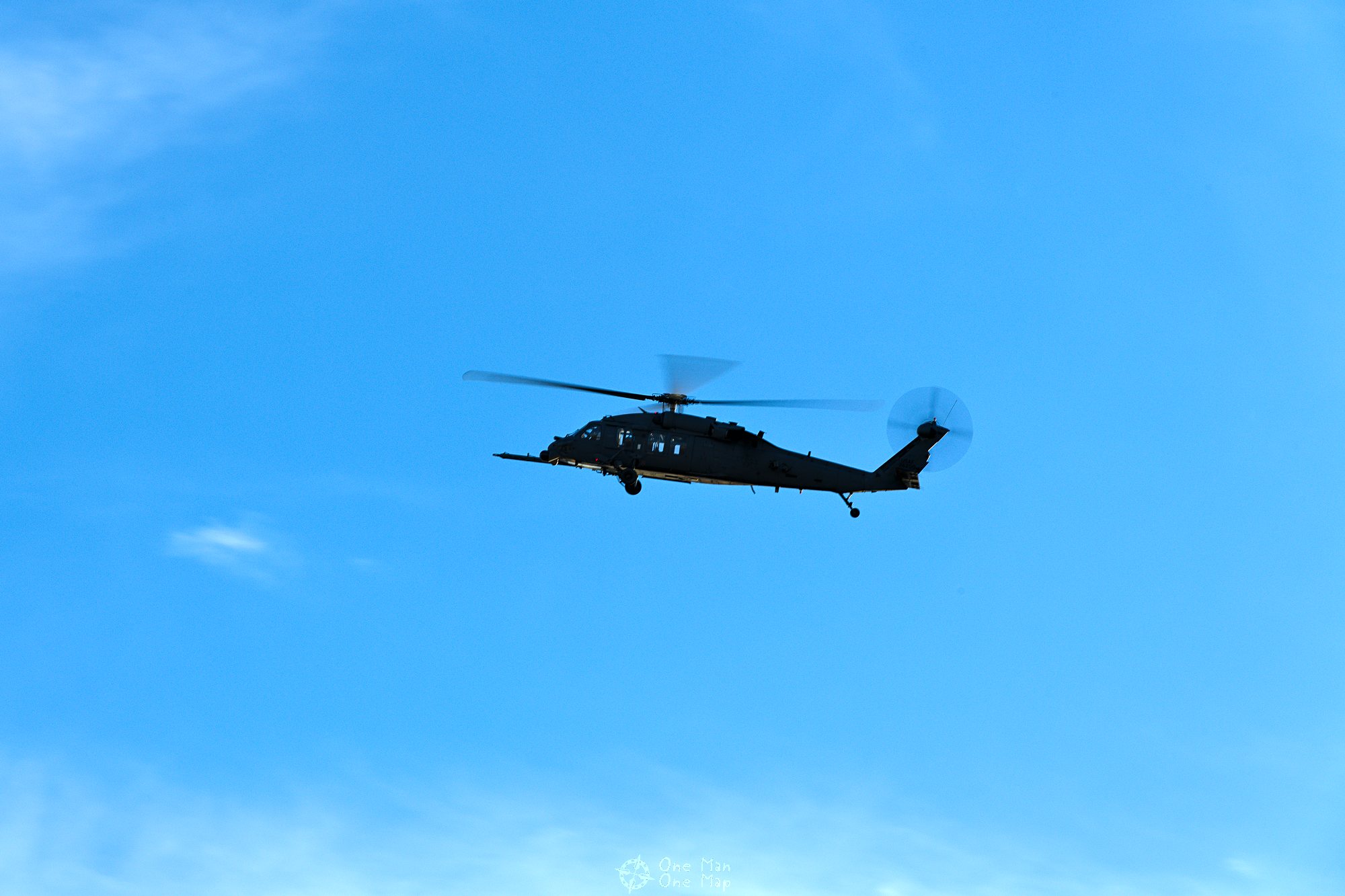 Conclusion: A visit to the Pima Air & Space Museum is definitely worthwhile. Not just aviation enthusiasts will get their money’s worth here.

The US Air Force “Boneyard”

The 309th Aerospace Maintenance and Regeneration Group (AMARG) of the United States Air Force operates a storage and reprocessing site for military aircraft directly adjacent to the Davis-Monthan Air Force Base in Tucson. The site, which is also popularly known as The Boneyard, is where surplus aircraft are being stored and where aircraft whose planned lifespan has been exceeded are being dismantled and recycled for parts.

The nearby Pima Air & Space Museum offers guided tours to AMARG twice a day at 11:00 AM and 2:00 PM. Tickets are US$20 per person, the tour lasts between 100 and 120 minutes. Since the installation is part of an active military base, all participants must undergo a security check. This takes several days, so registrations must be made at least two weeks in advance.

The tour is conducted using a special coach bus which cannot be left during the entire duration of the tour. According to the website, only essential things can be brought to the base, including “a small camera”. This information is incorrent. I was able to take my two Nikon DSLR cameras and several lenses on the bus and use them without any problems. Unfortunately in all those years the organizers never seem to have thought about making sure the bus windows are clean, or even about installing windows which can be opened. With so many fingerprints, reflections and distortions on the glass, even the best camera won’t help… 🙁

The first half hour passed just with the journey to the base and the security checks. Photography is not allowed between the base entrance and the actual AMARG site. 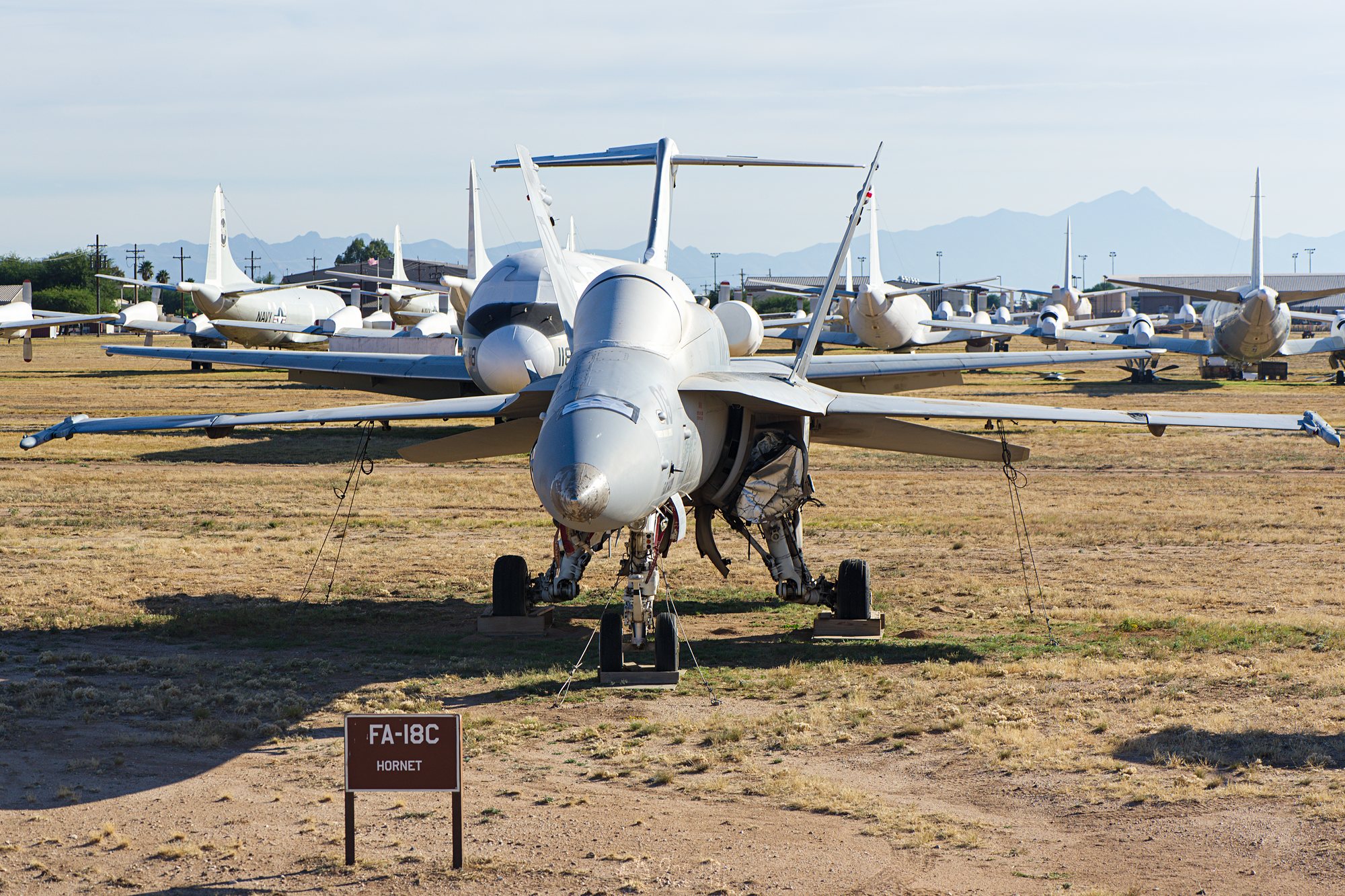 Since the numbers and types of aircraft on site are constantly changing, some well-known aircraft types had been parked along the access road and signposted. The tour guide had the bus go from exhibit to exhibit, explained the important facts and told us some short stories.

In these stories, of course, the good airplanes went to war only against the “Bad Guys”, and the US Army always won in the end. From a historical perspective probably not always a hundred percent correct, and quite tiring after a while quite. But it wasn’t to be expected otherwise: The tour leader was a veteran, the bus driver as well.

The U.S. military has a sense of humor. Sometimes at least. Until recently there was also a F-117 “Nighthawk” stealth bomber on site, but it had to be removed for spare parts. Since no other model was available, three wheels and a ladder were installed on the plain field and this work of art was jokingly called “Stealth Bomber in Stealth Mode”. Later someone even added an “invisible” pilot made of wire mesh on the ladder. 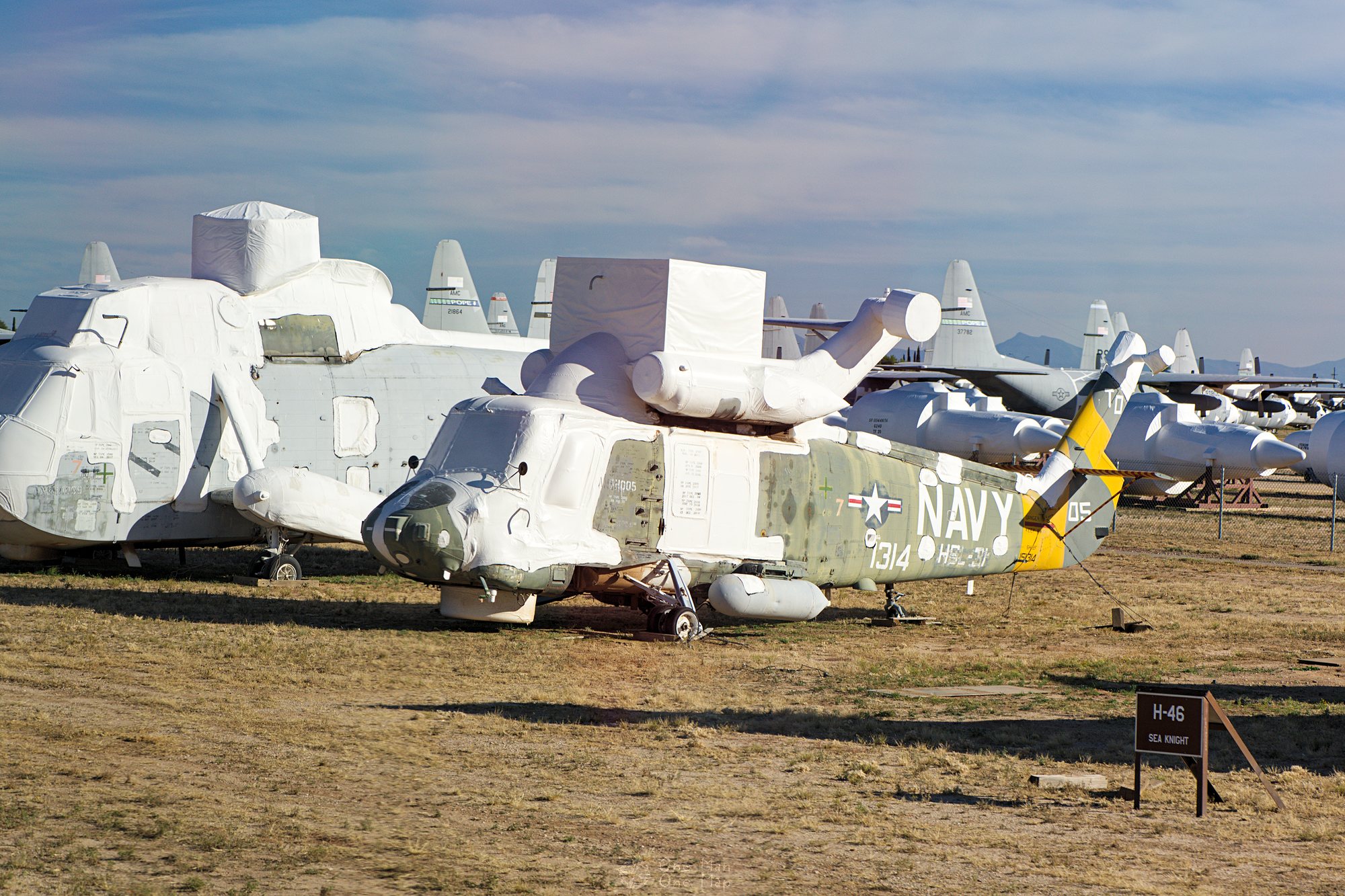 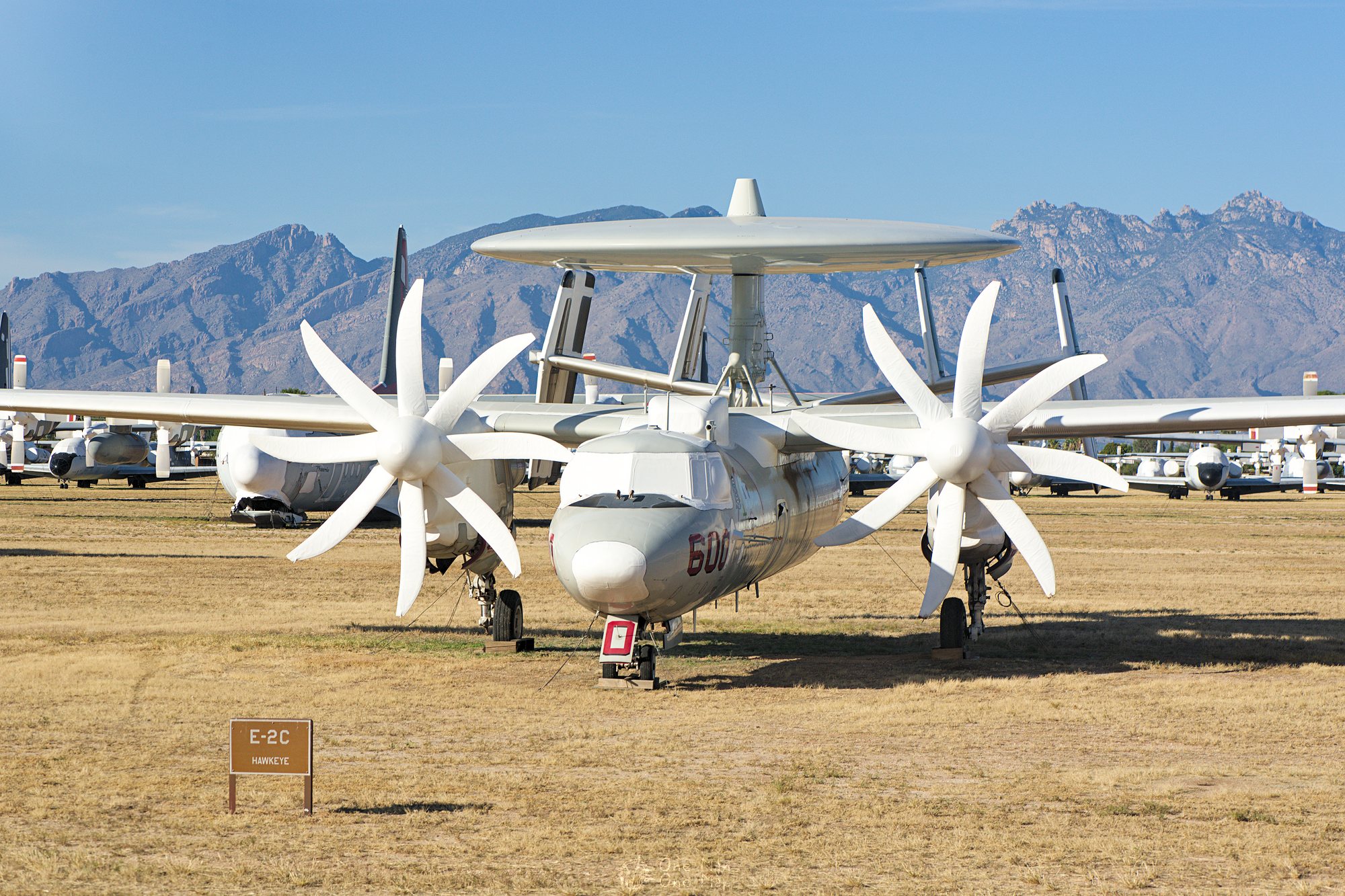 The storage concept for the aircraft is quite simple. First, fuel and engine oils are removed, and all surfaces thoroughly washed (especially important if they have been in contact with salt water). Then all openings are covered with aluminum tape, the sensitive parts are painted twice with removable black paint, and finally a protective layer of white paint is added. The dry air preserves the airplane, the white paint prevents it from heating up too much. 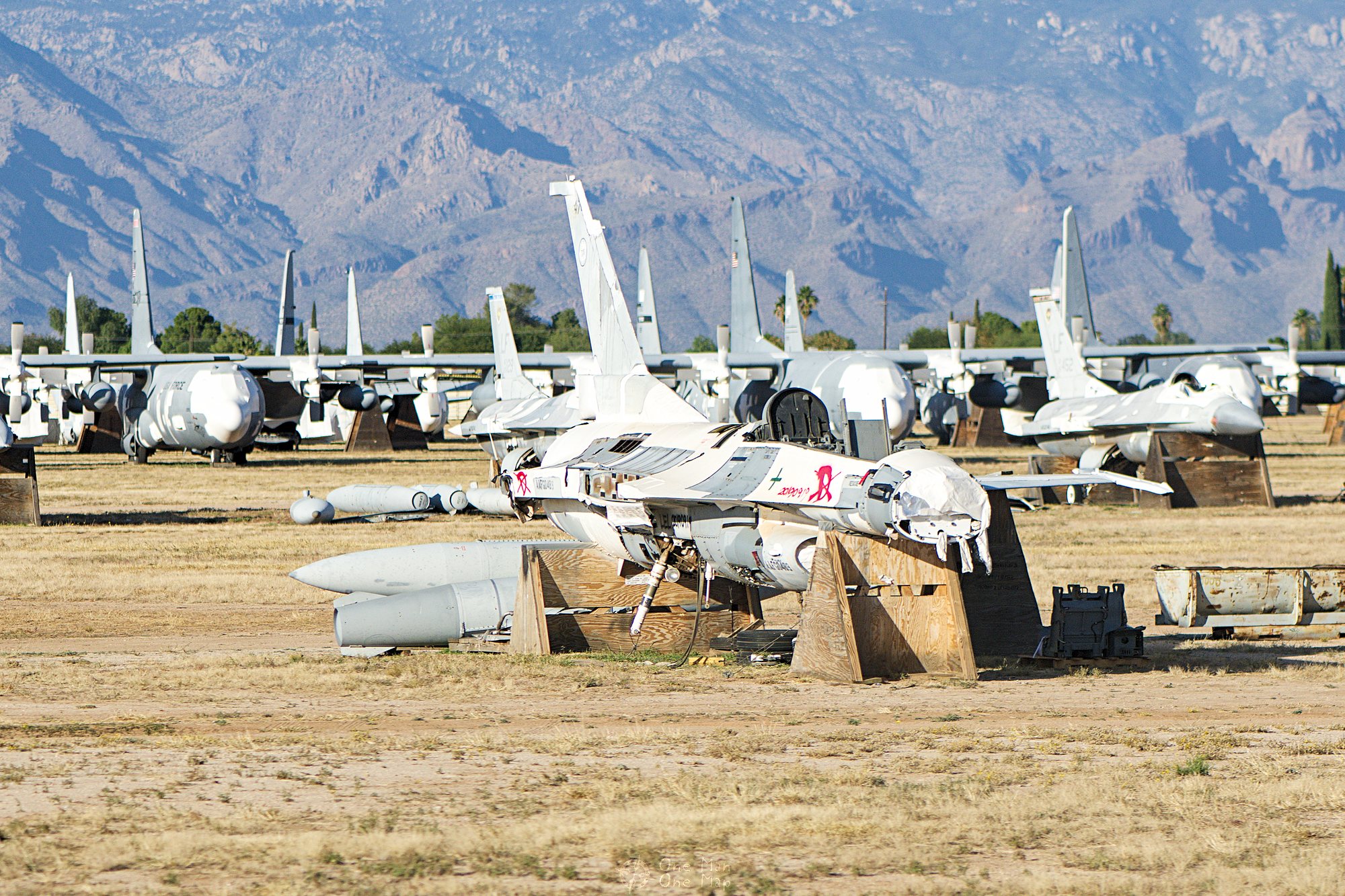 If the aircraft has not yet reached the end of its planned service life, it can be brought back into service within 72 hours. Otherwise it will be scrapped for spare parts, which will either be installed in aircraft still in service or sold on the open market.

About one and a half hours after the start of the tour, the bus finally pulled into the actual Boneyard. We passed endless lines of aircraft, neatly organized and packed, one besides the other. Unfortunately the bus hardly ever stopped from now on.

In the meantime NASA and commercial airlines have also started storing their old equipment on site. 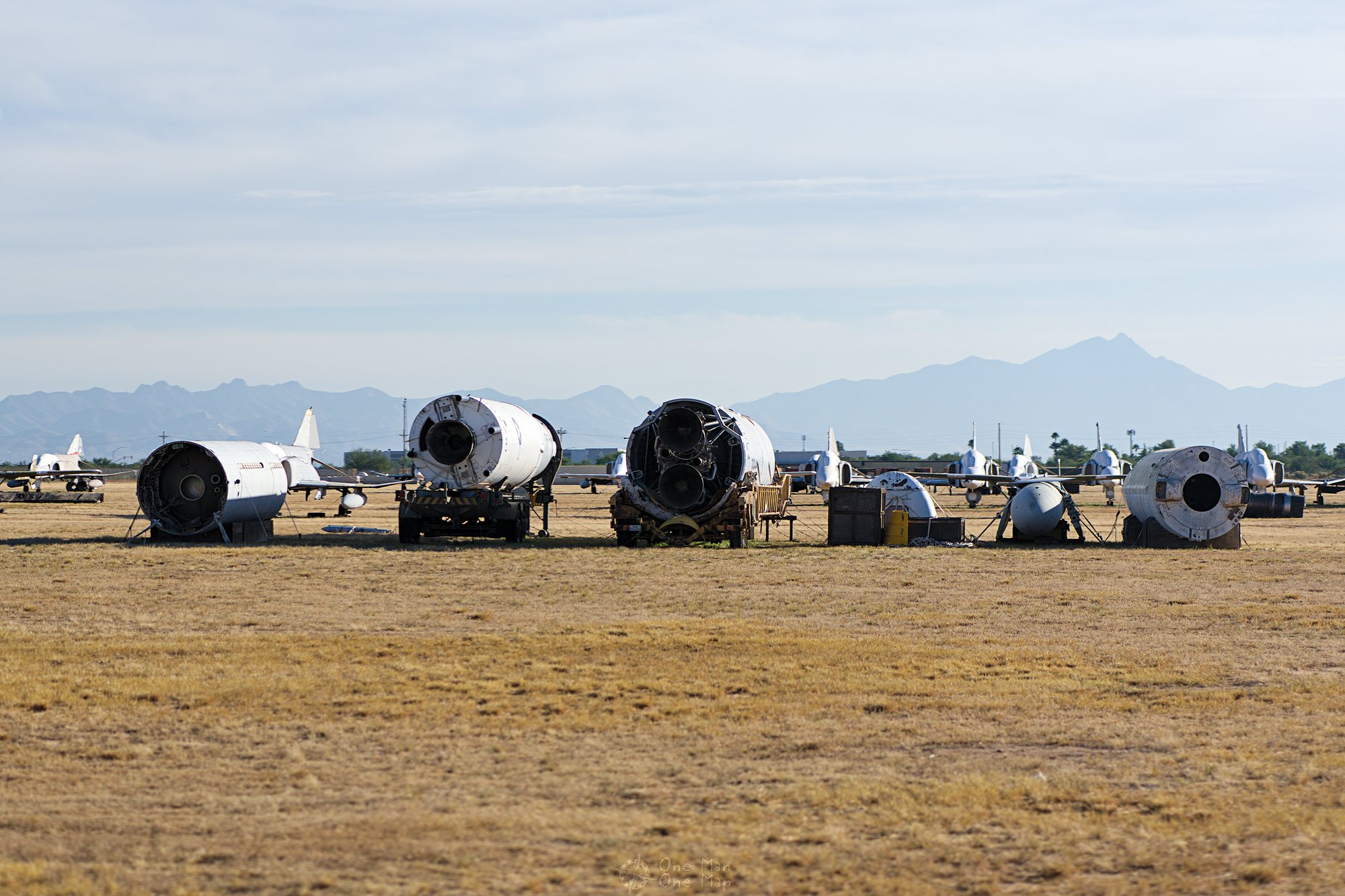 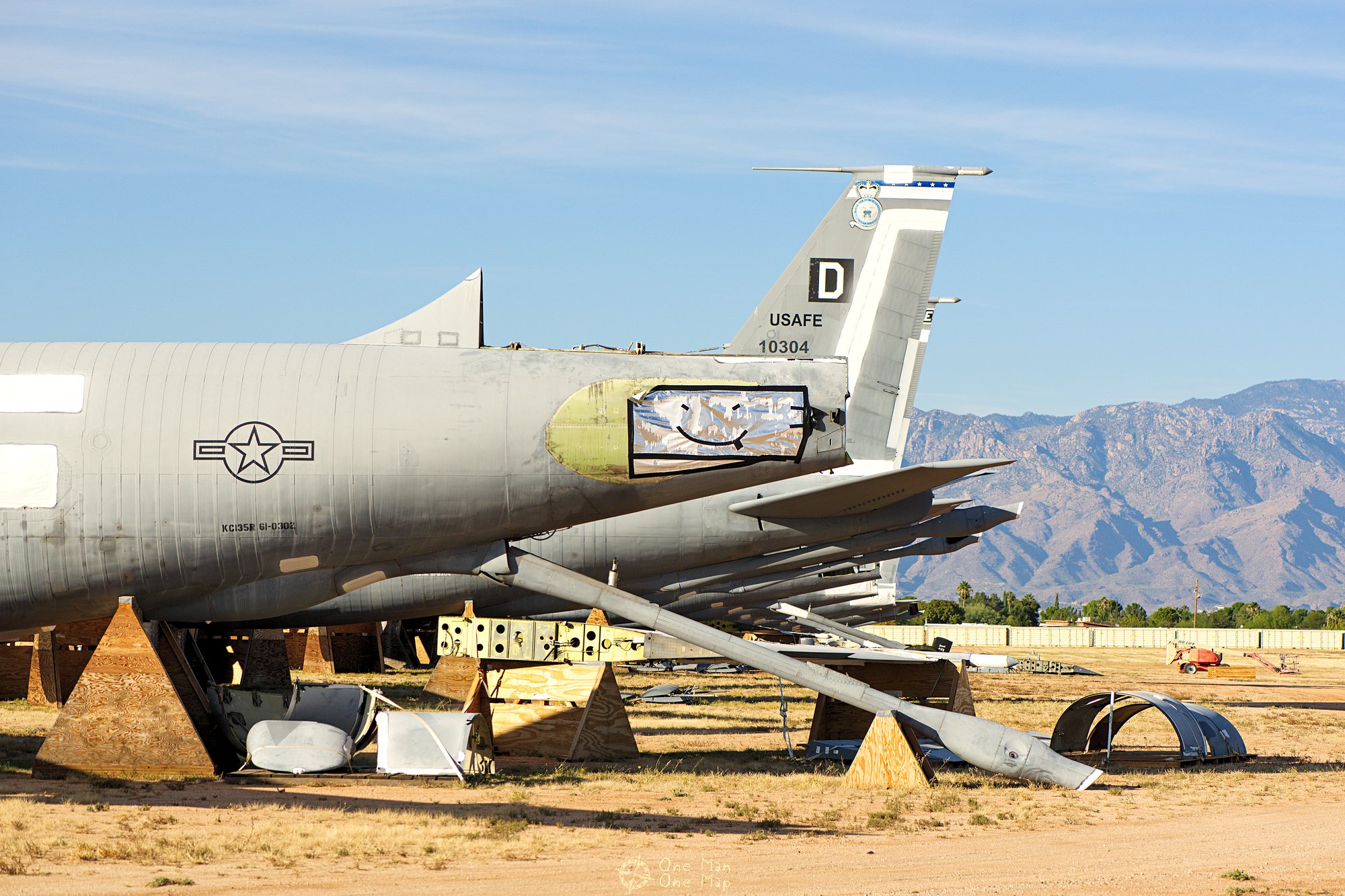 Conclusion: In my opinion the Boneyard tour is only recommended for die-hard fans of military technology. Everybody else can get much closer to the planes at Pima Air & Space Museum.

Pinal Airpark in Pinal County was founded in 1942 as Marana Army Air Field and served primarily as a training base for military pilots. At that time the area housed a large number of buildings, fuel tanks, its own railway station and a total of five additional runways in the vicinity. After the Second World War, much of the infrastructure was removed and the new owner, the district administration, leased the site to various airlines.

During the Vietnam War, the CIA conducted all its air operations from Marana. The CIA used a specially formed front company called Intermountain Airlines, whose alleged company mission – transport cargo – was to explain the irregular takeoffs and landings. The camouflage, however, was probably quite thin right from the start, and when a Boeing B-17 “Flying Fortress” – a heavy bomber – was stationed, the general public probably realized that Intermountain Airlines might not have been a completely normal aviation company after all.

Since 2012, most of the military and intelligence operations have been withdrawn and attempts are being made to transform Pinal Airpark into a regular commercial airfield. Much of the area currently serves as a graveyard for commercial airliners, though. Jim Petty, the district administrator in charge, offers free guided tours on request (jim.petty@pinalcountyaz.gov, Telefon +1 520 866 6545). 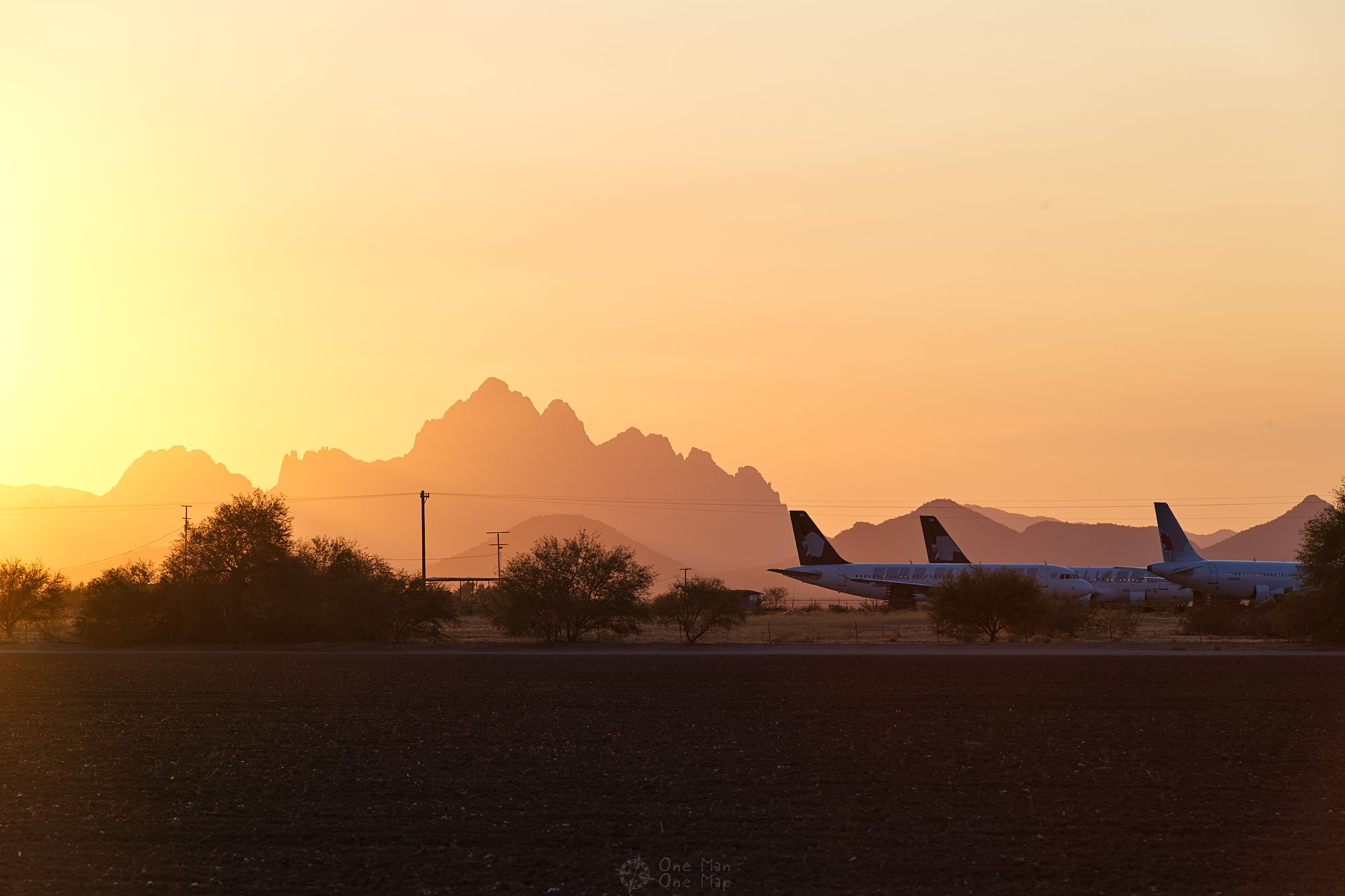 Conclusion: If you have enough time for the almost 50 kilometre ride from Tucson or are driving along Interstate 10 anyways you should definitely stop by Pinal Airpark. You will already have a good look on the dying giants just from the access road.