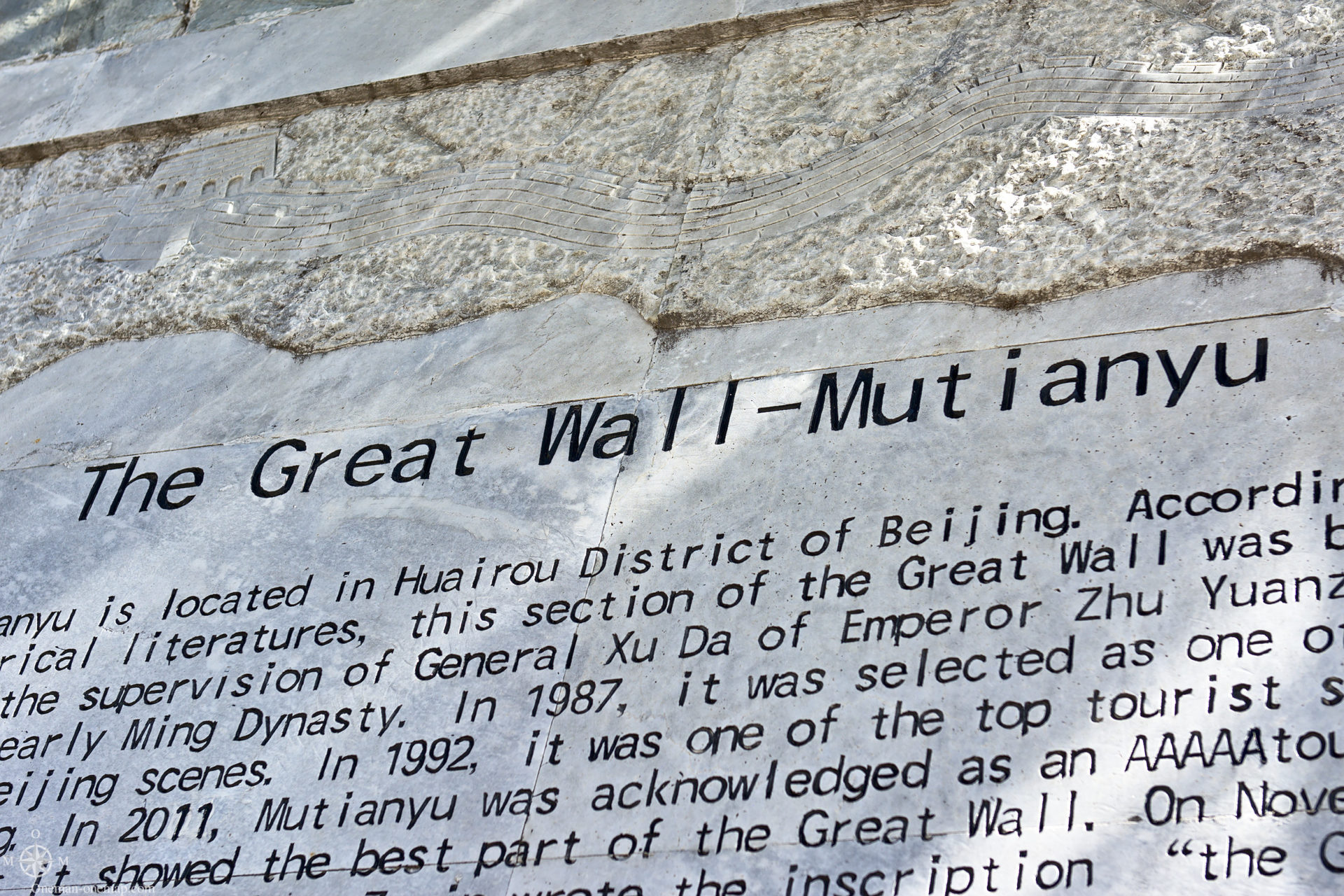 If you effectively just have two days for a trip to Beijing and its surroundings, the plan pretty much makes itself. One day goes to Tianamen Square, the Forbidden City and the neighboring areas, and the other one to the Chinese Wall (萬里長城).

But “the wall” (it’s actually several loosely connected walls) has a total length of over 20.000 kilometers, and just the main wall alone intersects with the city limits of Beijing for about 600 kilometers. Four sections of this segment have been restored and are popular with tourists, but you can also book long and adventurous hiking tours to the unrestored parts. What now? Which parts can you go to with using the 72 Hour Temporary Entry Permit, and how did I decide?

If you’re short on time and/or either do not want to travel far or are not allowed to travel far (you can’t leave the city limits of BeiJing while on the Temporary Entry Permit), it usually boils down to Badaling (八達嶺鎮) or Mutianyu (慕田峪, pronounced Mu-tian-jue). Badaling is just about 70 kilometers from Beijing, is the most visited section of the Chinese Wall and is often described as being “overrestored”. Also masses of Chinese tourists go there. 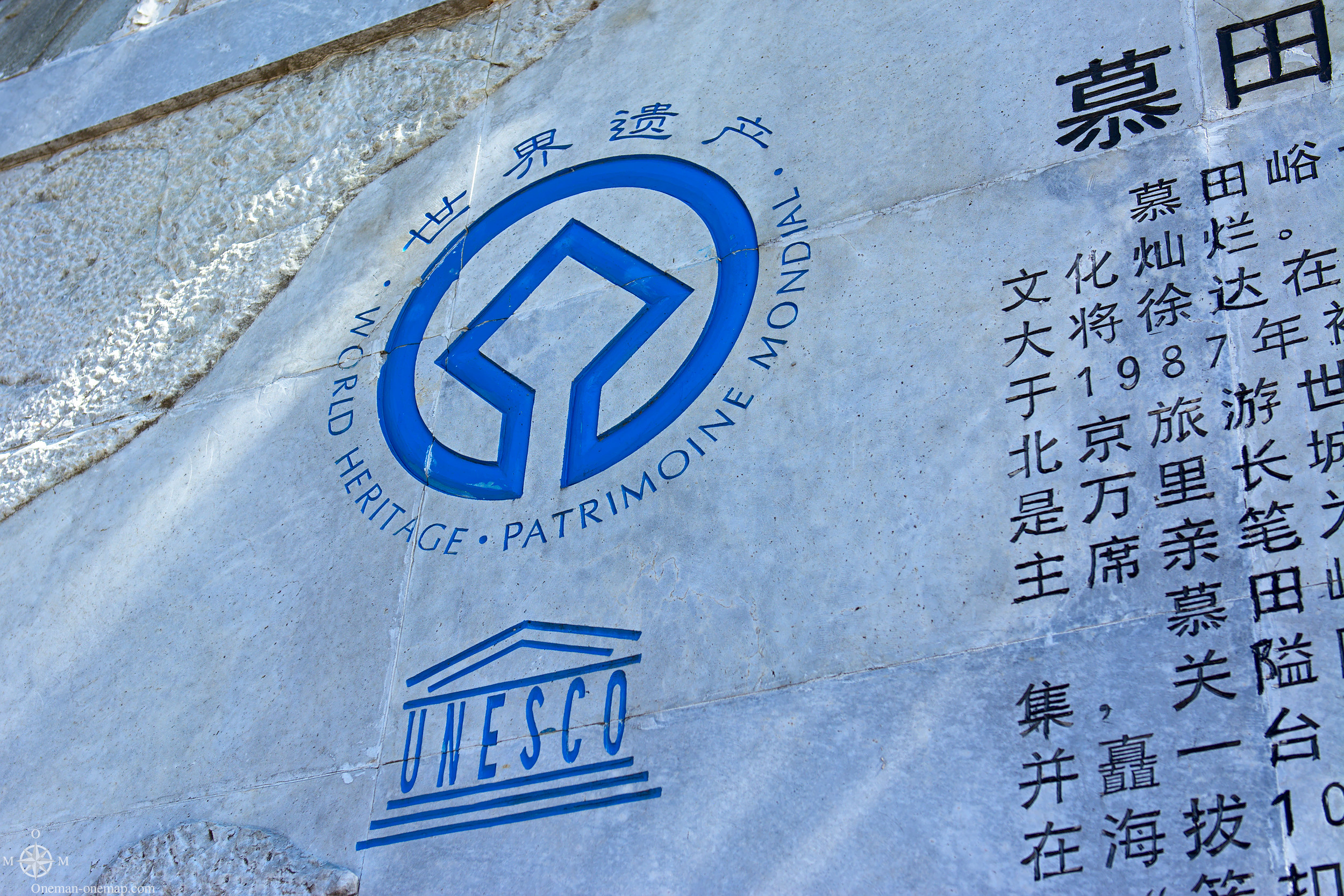 On the other hand, you can reach Badaling on your own very easily and on the cheap. You either go to the Jishuitan (水潭站), walk to the Deshengmen (德胜门) intercity bus station and pay 12 Yuan (about 1.50 Euro) für a ~60 minute ride on express bus line 877. Or you go to the Qianmen (正陽門) metro station and pay 20 Yuan (about 2.50 Euro) for a ticket on Tourist Bus Line 1, which takes about 90 minutes. The entrance fee for Badaling is 40 or 45 Yuan depending on the time of year.

Since Beijing was already full of Chinese tourists, I didn’t really want to get pushed around on the Chinese Wall too. Also I wanted to see a more authentic and more “spectacular” section than Badaling. In the end I opted for a tour package to Mutianyu. This section is visited by many foreigners, the restaurations are more modest, it is steeper, but it cannot be easily reached using an express bus.

The tour organizer wanted 280 Yuan (about 36 Euros) for the Bus ride, the entrance fee and lunch. Not exactly cheap, but the pick you up at your hotel and bring you back, you need something to eat anyways, and the regular entrance fee is 40 Yuan. The Bus ride took about 90 minutes per direction and was a bit adventurous, since the bus driver used a lot of shortcuts over small roads. We quickly understood that the drive would have been even longer if he had used the congested main roads.

The tours are not guided. We arrived at Mutianyu at about 10 AM, ran past the souvenir stalls, hopped onto the shuttle busses to cover the remaining three kilometers to the actual entrance, the guide gave us the tickets, and then we saw each other again three and a half hours later at the restaurant. It was perfect, everybody was able to choose their own speed, and I wouldn’t have been able to continue walking on the more than 2.000 steps after three and a half hours in direct sunlight at 28° Celsius anyways. 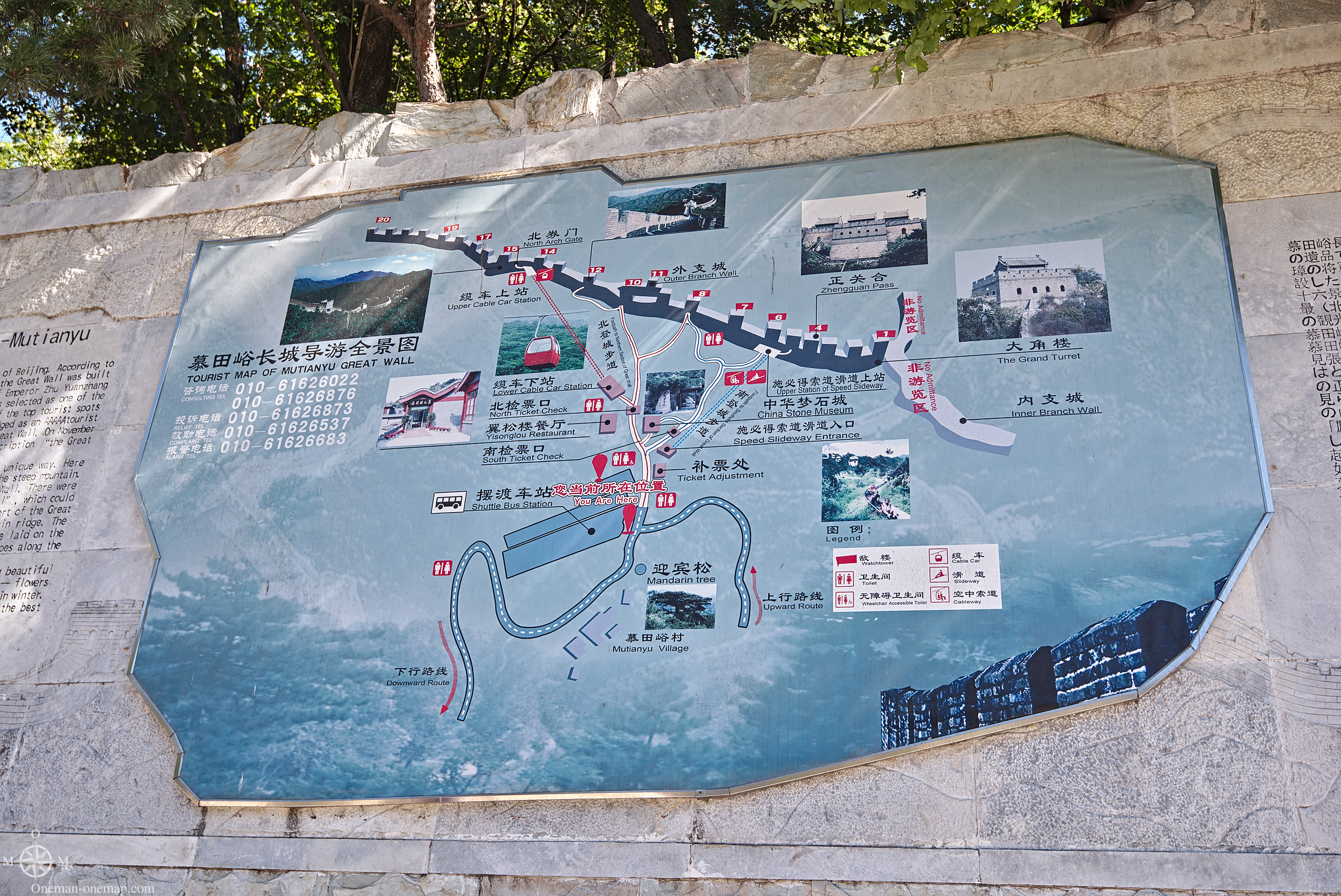 The restored area of Mutianyu covers about four kilometers. It goes from watch tower 1 (top right) to watch Tower 20 (top left). There are about 200 meters between two watch towers. You can climb over the barrier at Tower 20 and continue until Tower 25 on a non-restored section of the wall.

Parking space and ticket booths are way below the actual wall, so we had to decide how we want to go up… 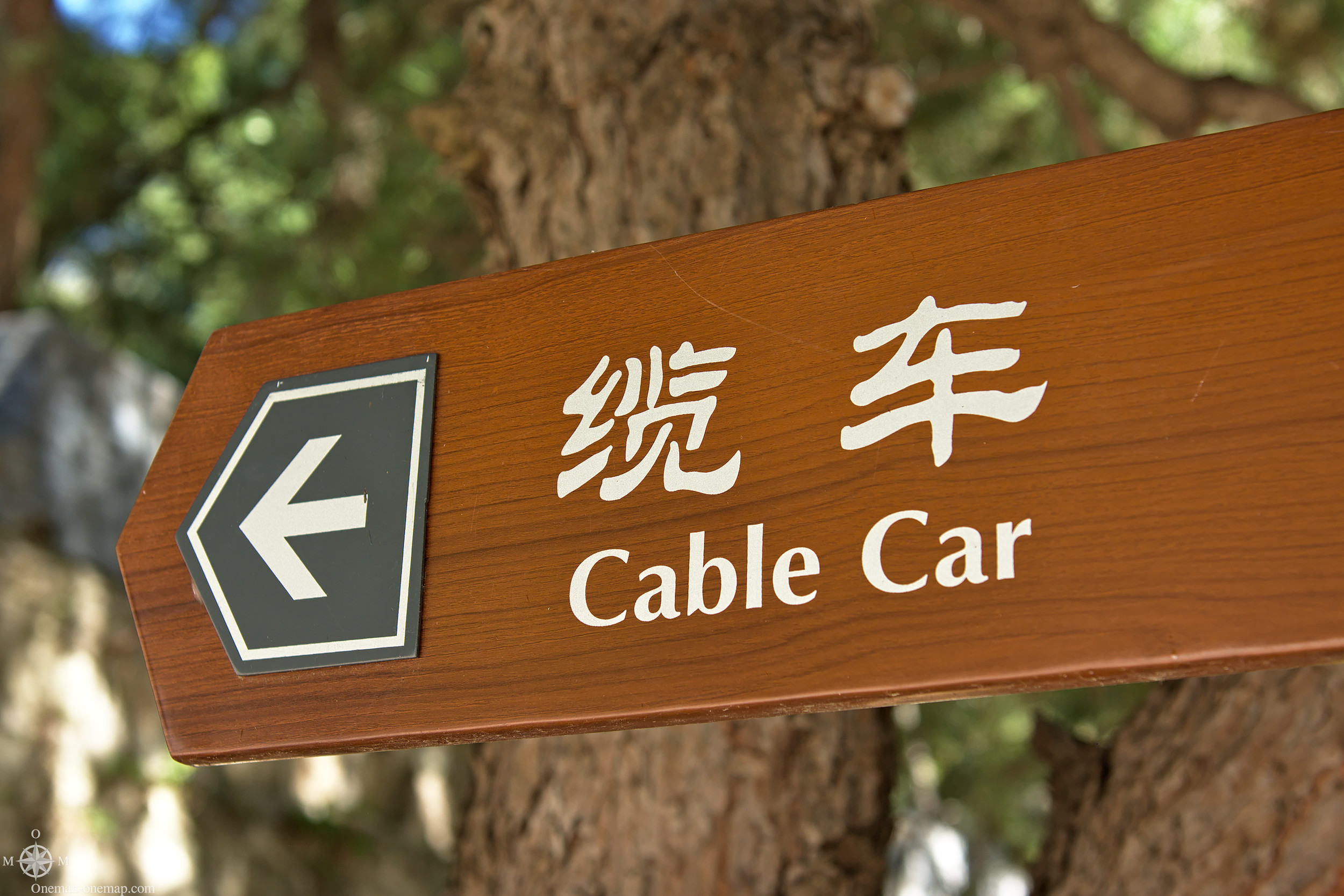 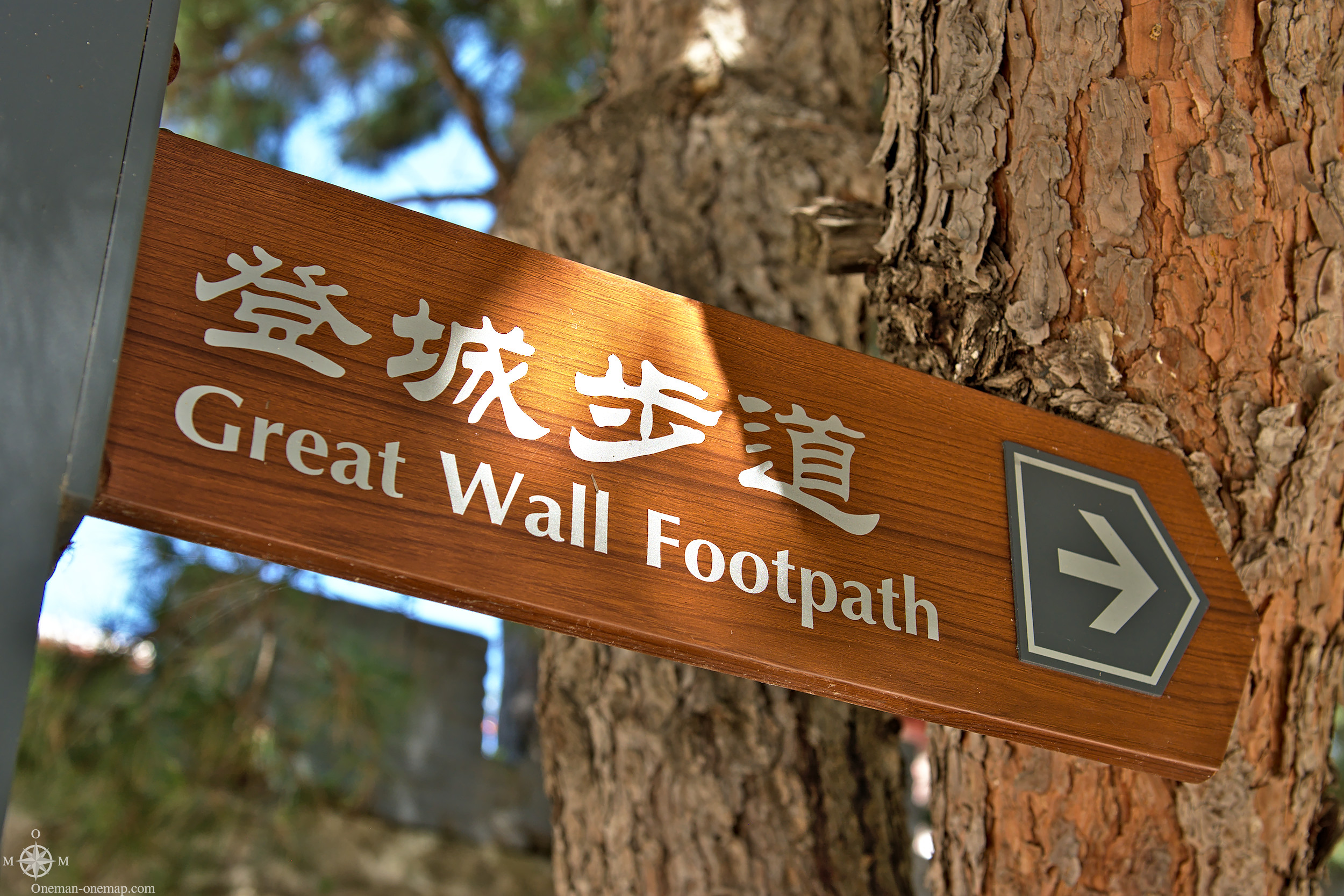 The cable car is an additional 100 (~13 Euros, single ticket) or 120 (~15 Euros, return ticket) Yuan and is not included in the tour price. The footpath is free, but has over 400 steps. I decided to go up using the cable car and walk down on the footpath.

When I visited Mutianyu, a strong wind had blown away all the clouds and the smog, so you could actually see quite far for a change. Don’t forget your sun screen! 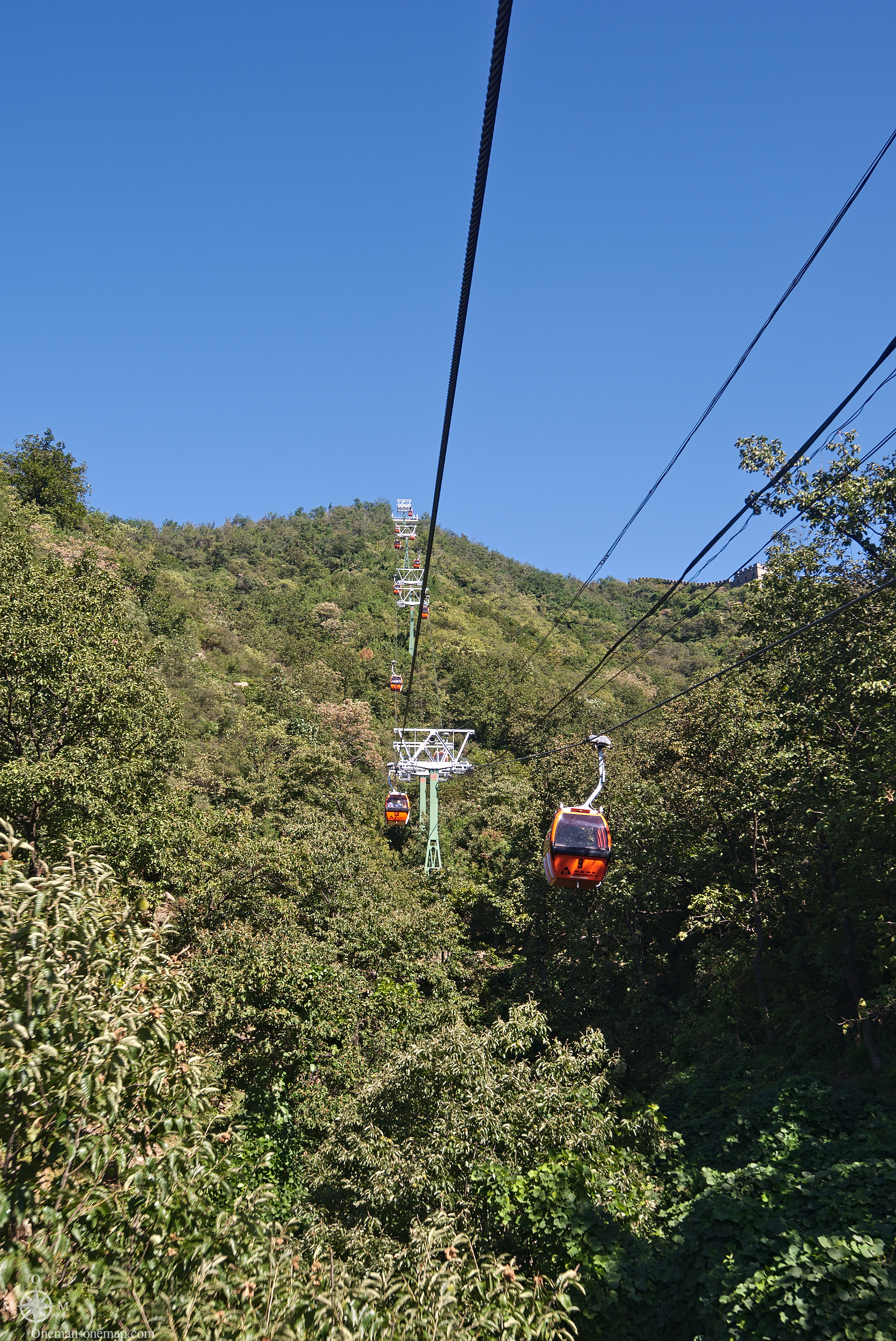 Cable car and footpath each lead to different points. The cable car ends at tower 14, the footpath leads to Tower 8 or 10. There is also a ski lift which ends at tower 6, from which you can go down on a toboggan ride.

This interesting stone is located at the top of the cable car (Henkel is a very big German corporation): 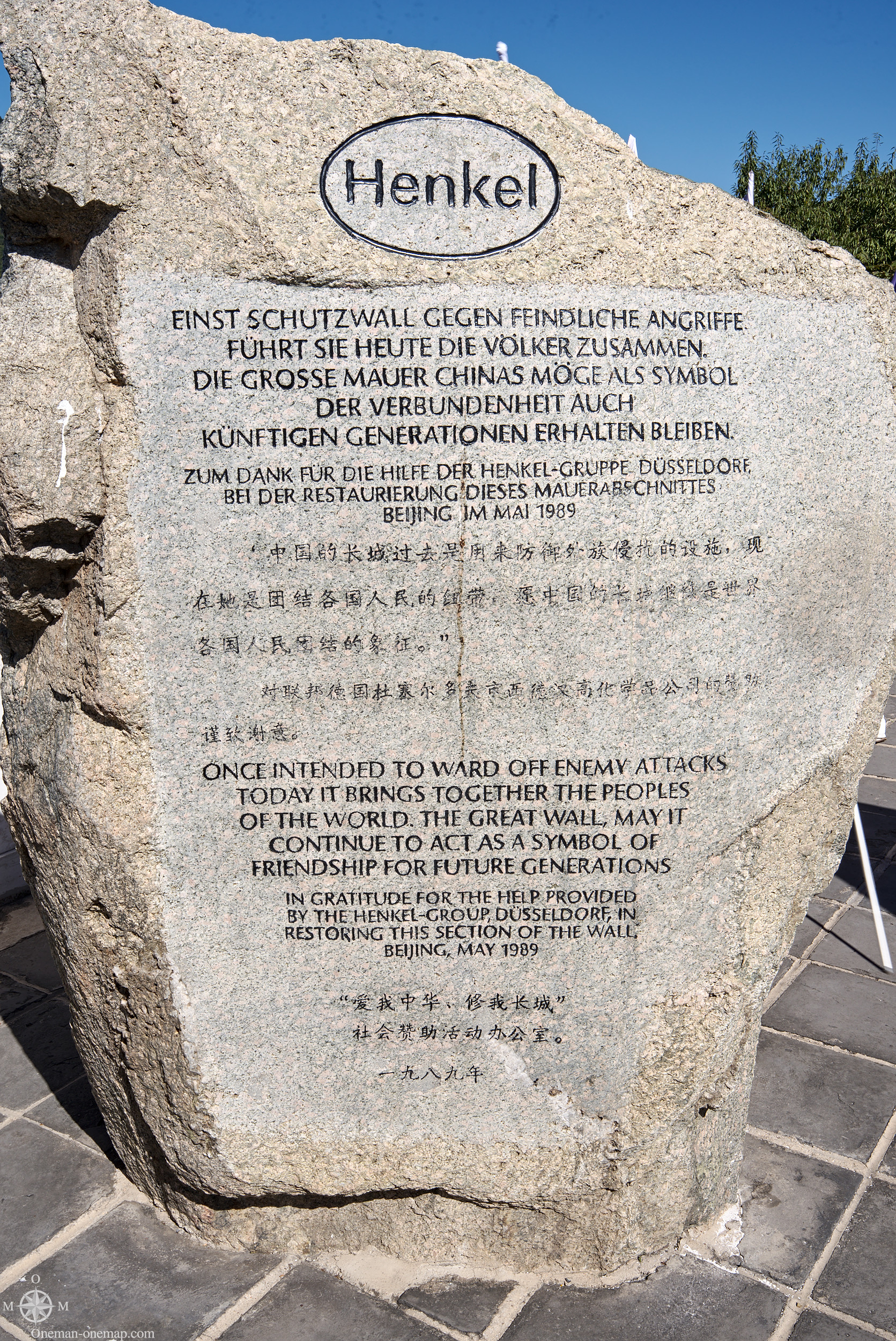 Depending on your choice you start at some point in the middle of the Mutianyu wall section, so you always have to decide in which direction you want to walk first. Towards Tower 1 the section goes downwards and you have to climb back up afterwards, … 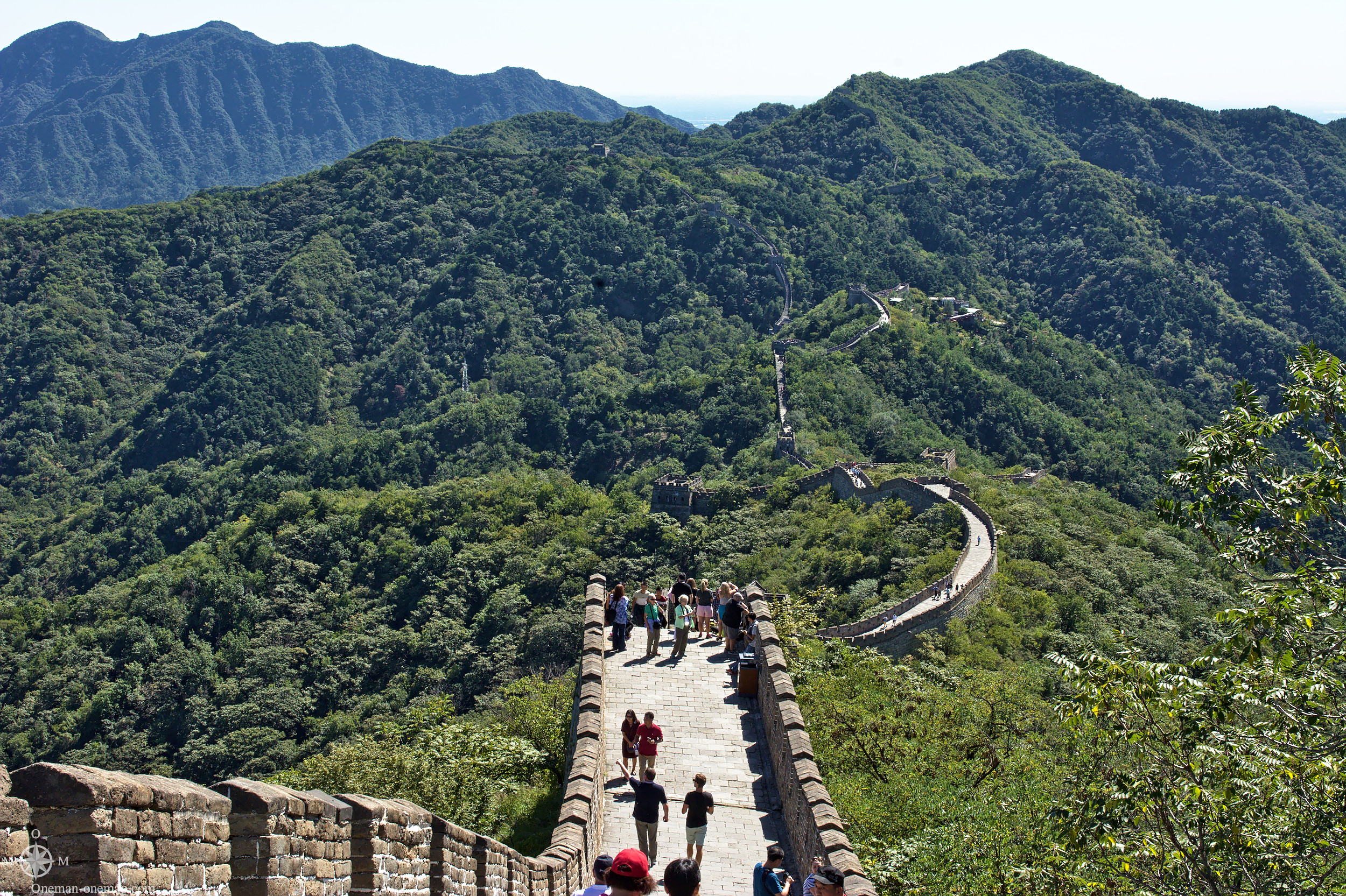 …and towards Tower 20 it climbs up first and then you walk down again. 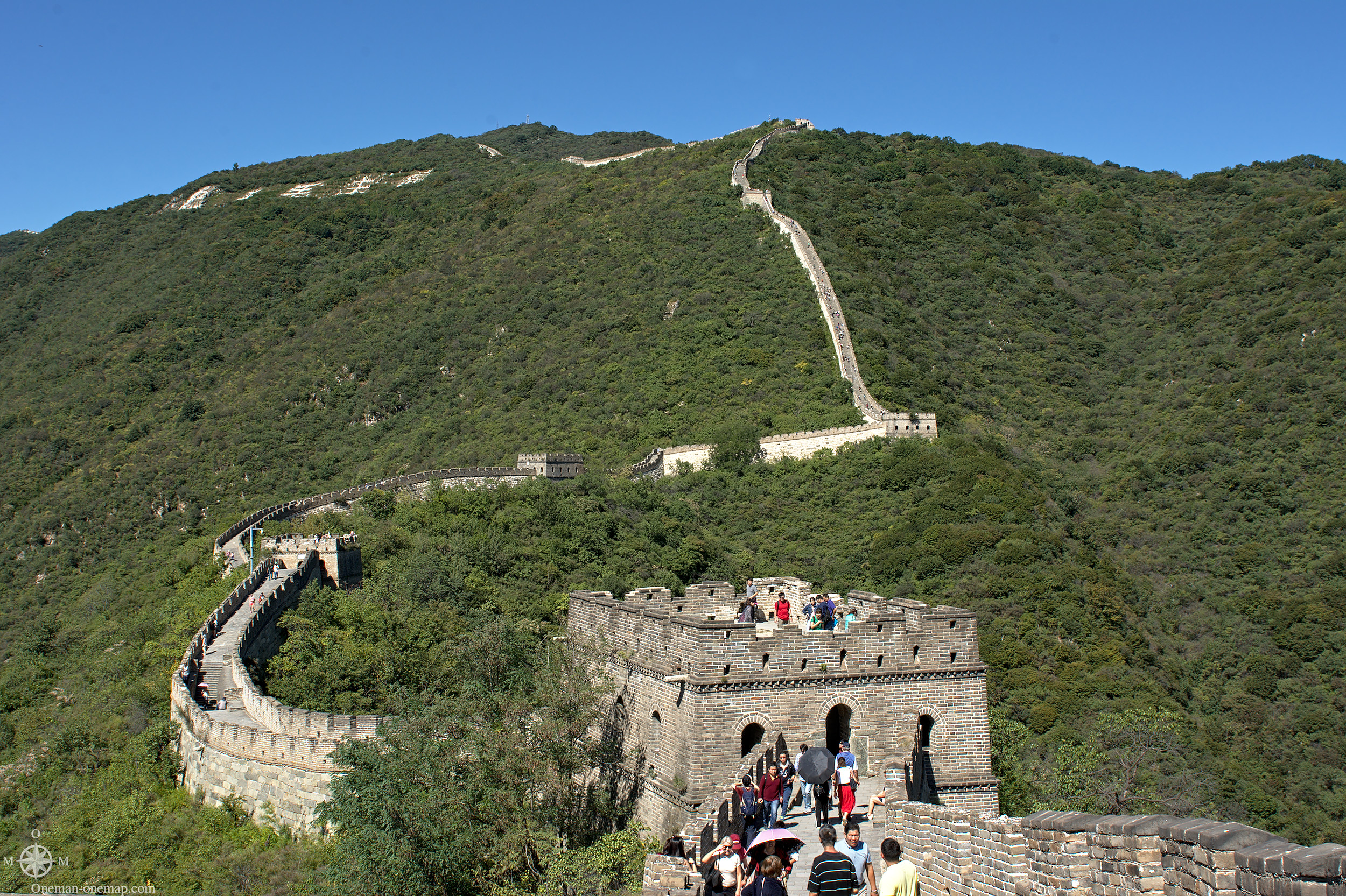 I had decided to walk towers Tower 20. I expected to have a better view from up there, and I thought it would be better to have to fight my way up first and then be able to walk down in a “relaxed” fashion.

If you wanted to see the whole section between Tower 1 and 20, you would have to walk more than eight kilometers in about three and a half hours. Most tourists make it from the cable car at Tower 14 up to Tower 19 or 20 and then walk back to Tower 14. I managed to walk from Tower 14 to Tower 21 and then back to Tower 8, but came down to the restaurant at the last minute. 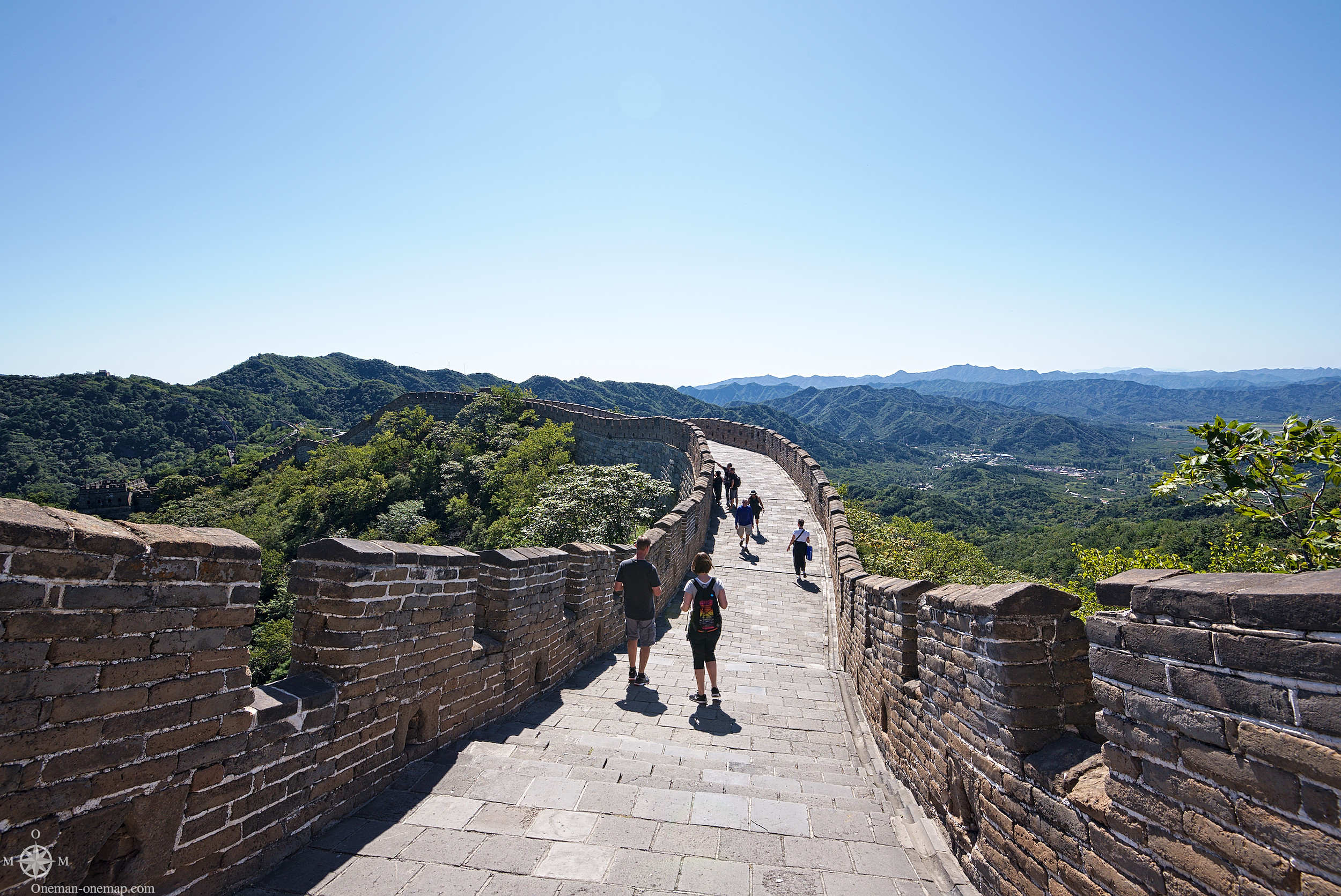 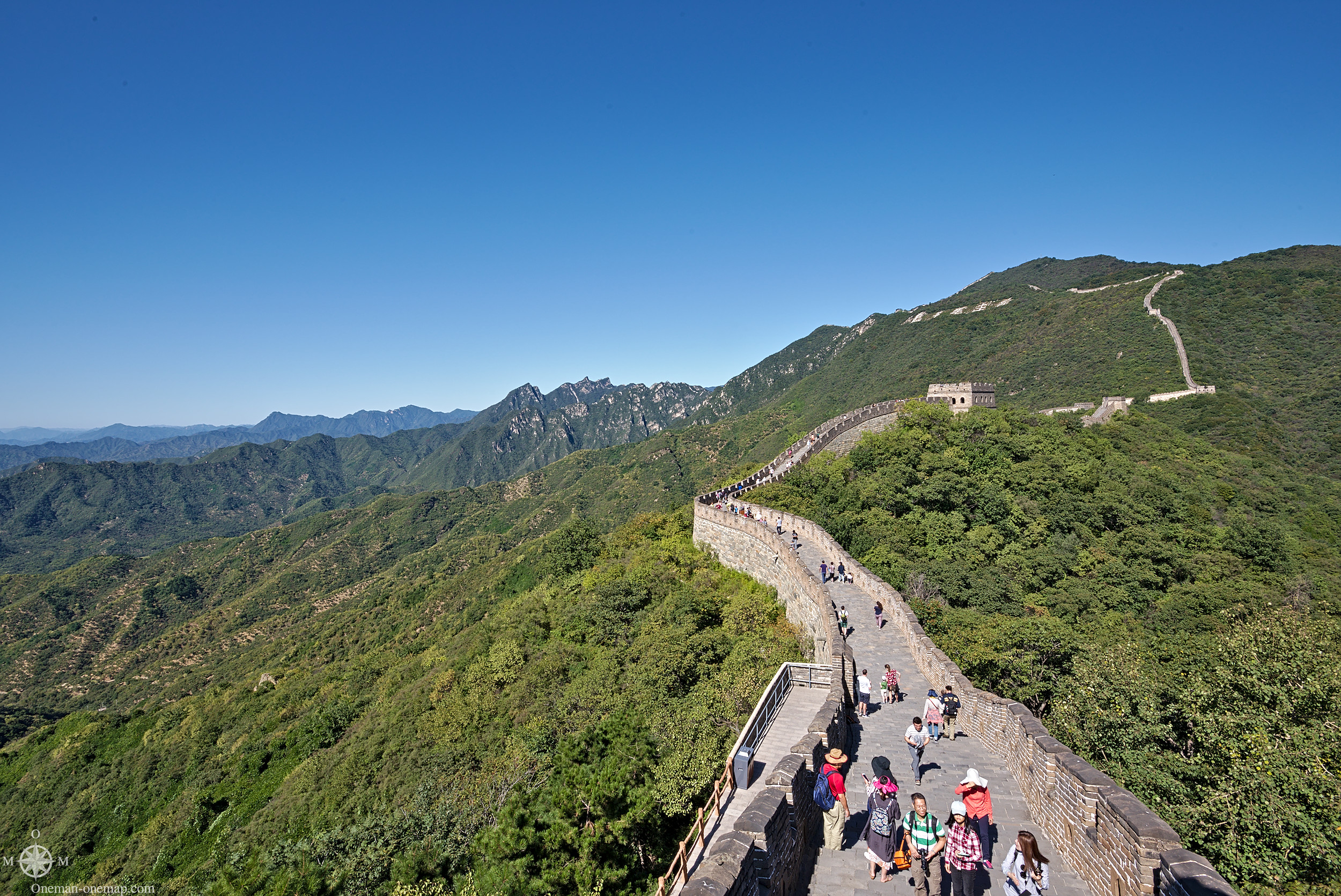 The Ming Dinasty still continued to invest in the installations, but the following Qing Dinasty ruled over a larger territory and its empire was now on both sides of the wall. Since the 17th century the Chinese Wall had lost its function and crumbled away.

The Qing Dinasty constructed the Willow Palisade between Manchu and Mongolia, by the way, to keep out unwanted migrants – 400 years before our modern-time border fences. 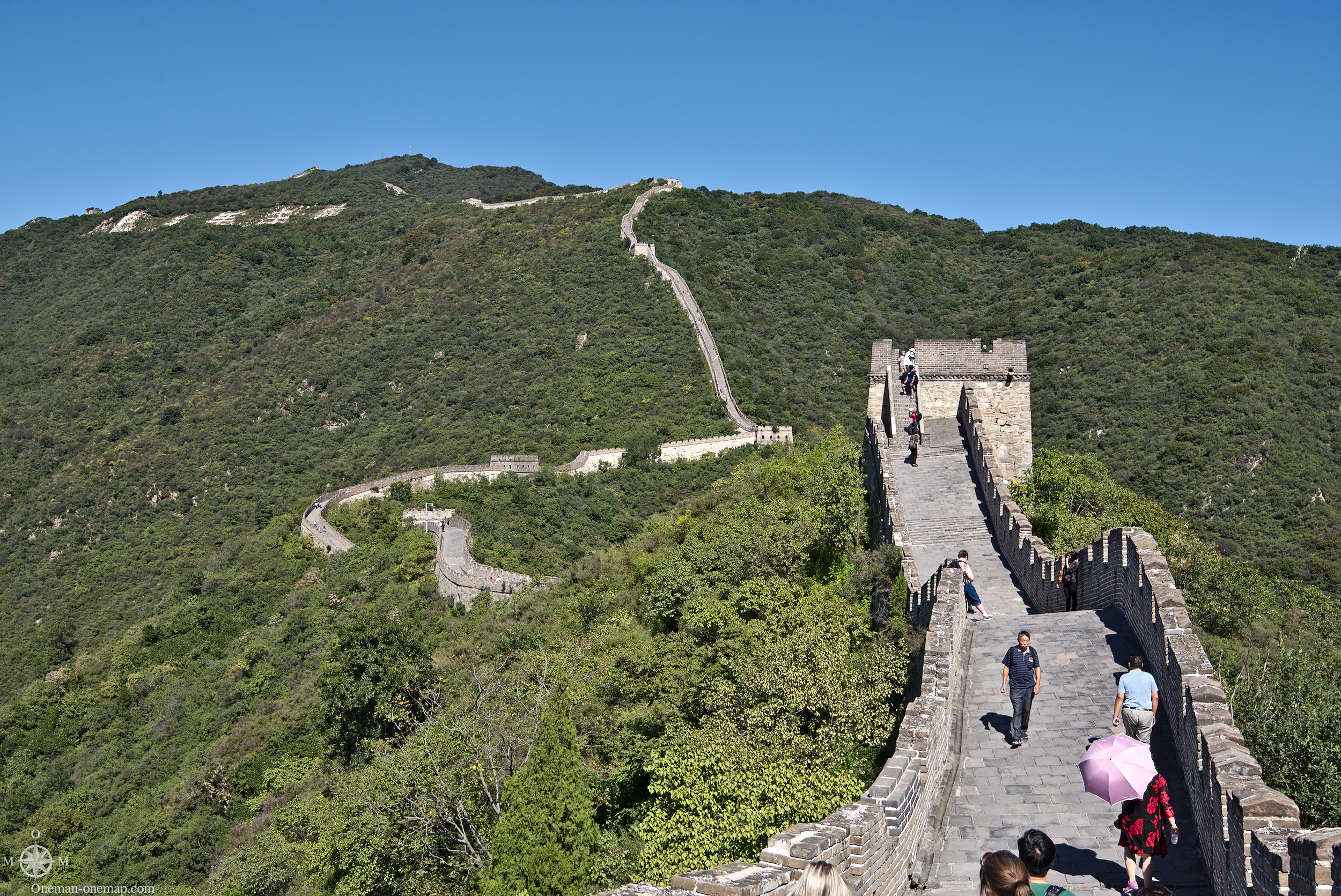 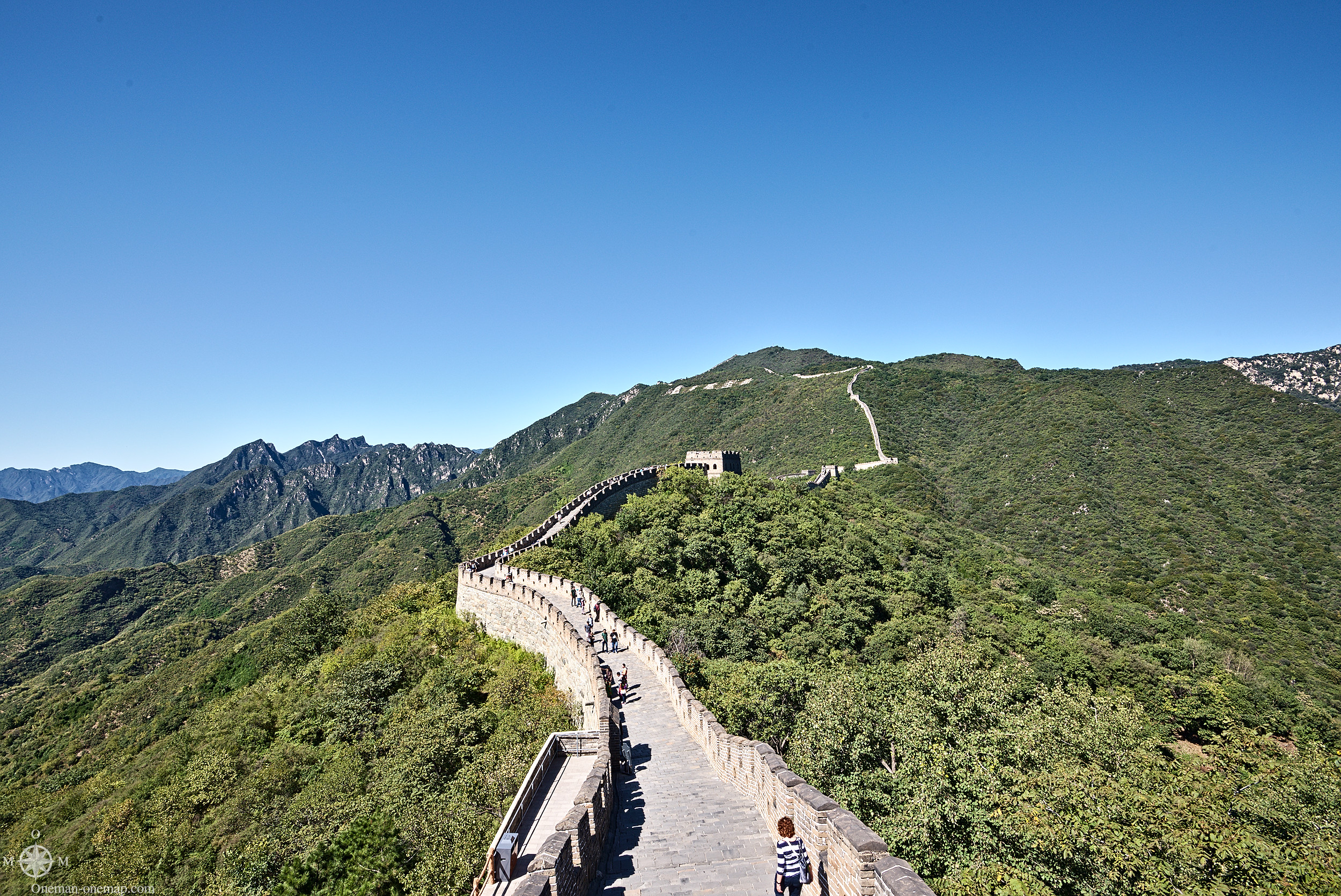 The watch towers served as lookouts, housing for the soldiers and as a communication backbone. Messages were transported using smoke and fire signals. 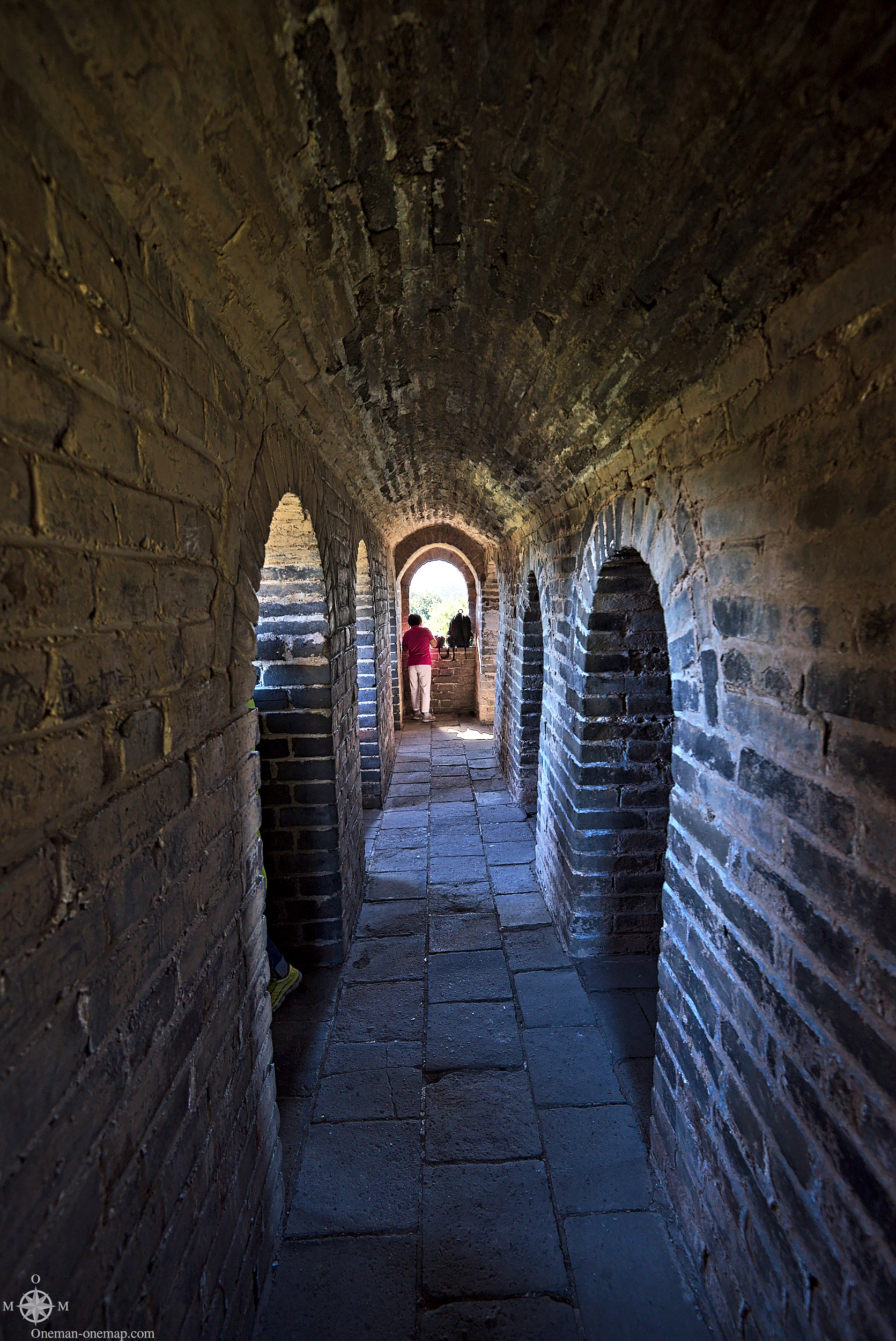 Who wouldn’t have wanted to be a guard on a tower with such a view? Mutianyu is quite inaccessible, the soldiers probably didn’t have to defend much… 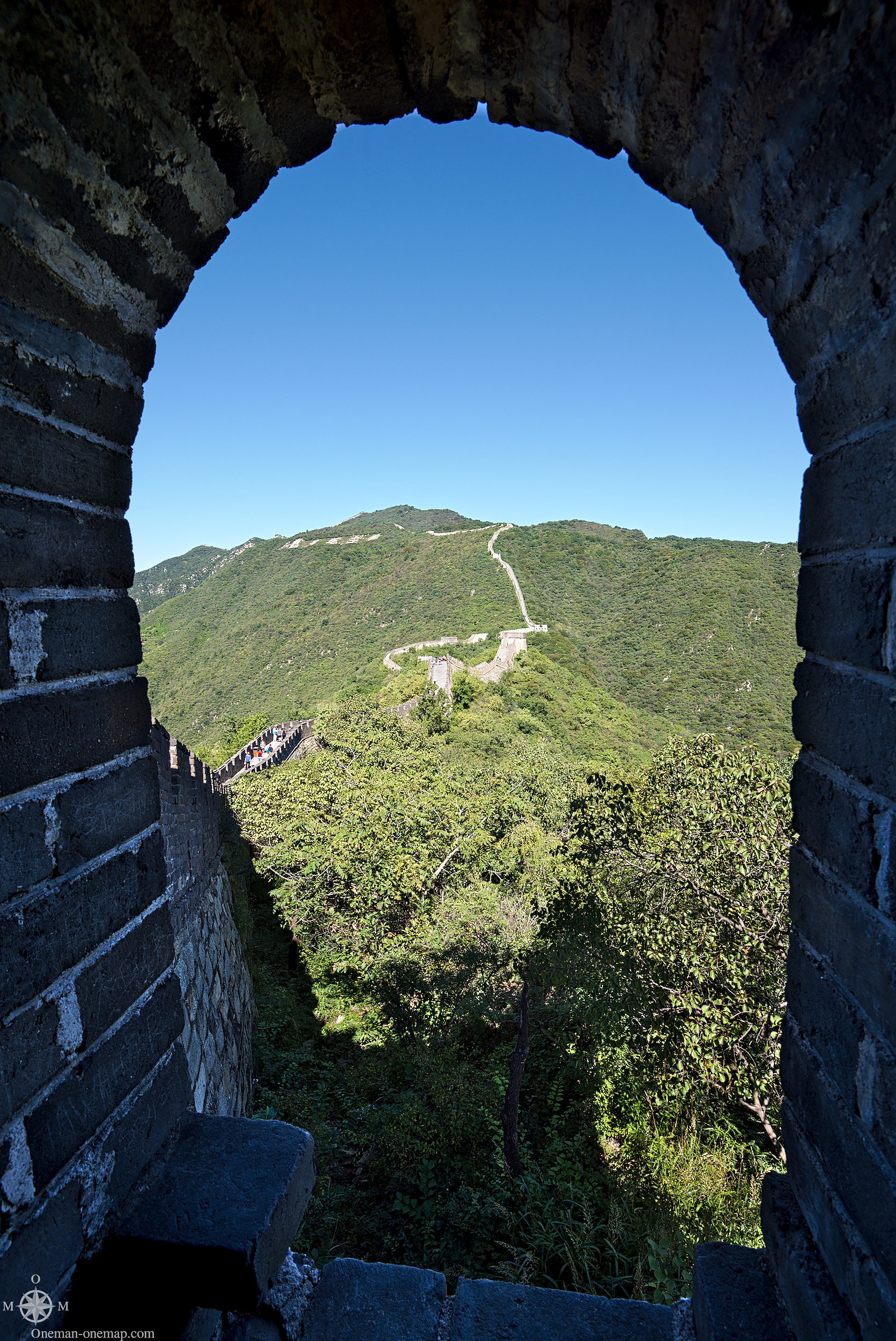 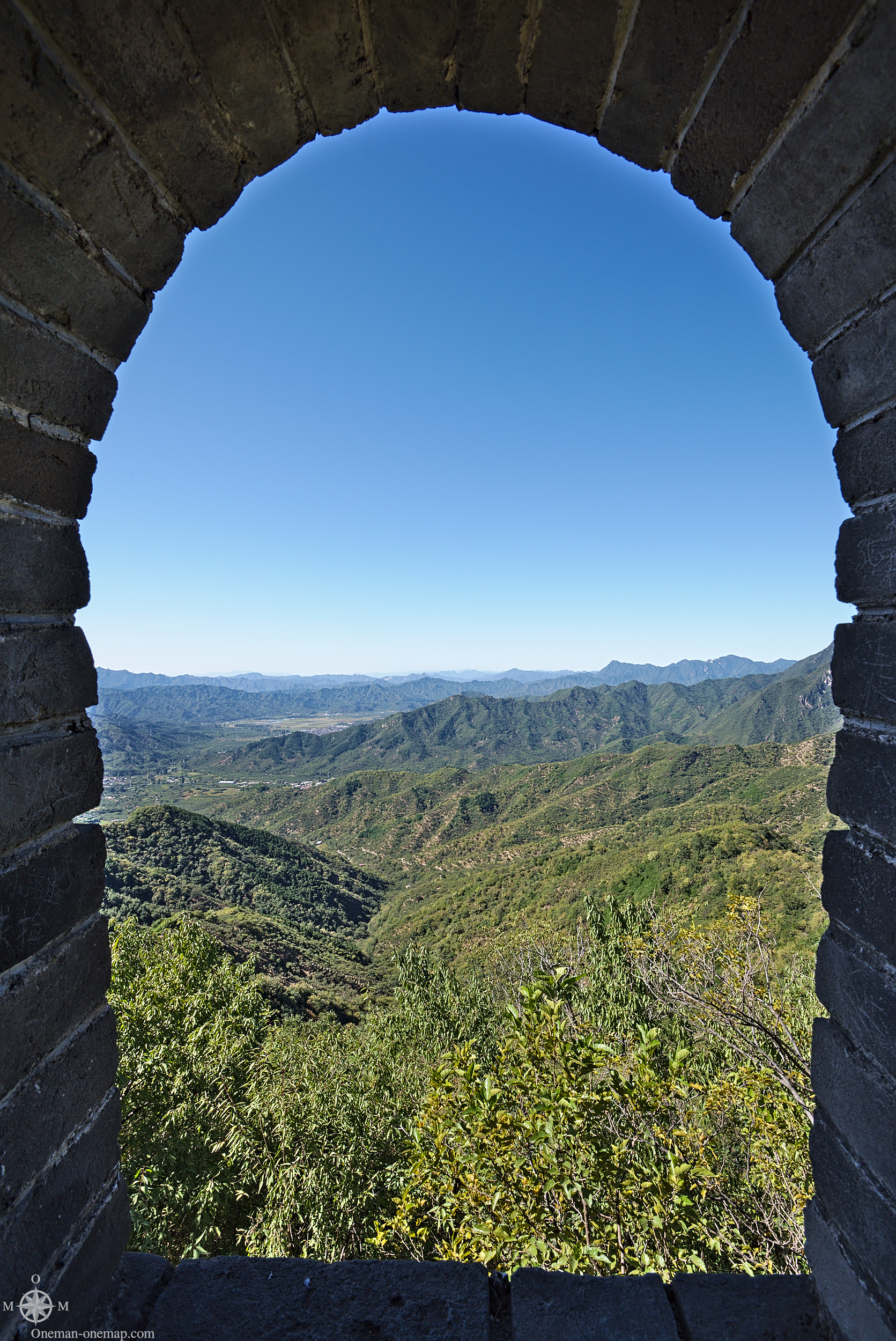 …with the exception of this wanna-be Mongolian, maybe 😉 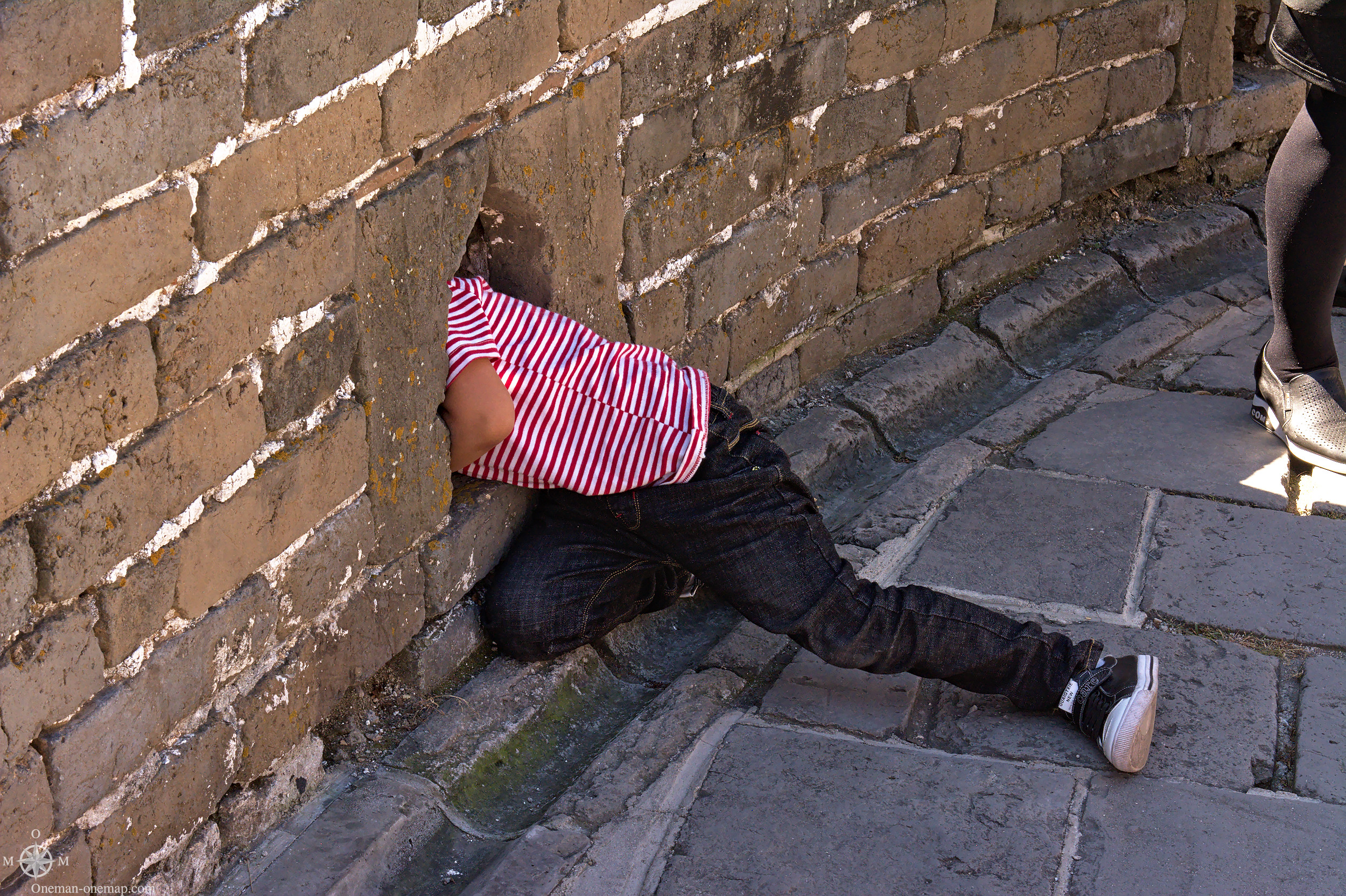 The hike became steeper and steeper, at some points even dangerously steep… 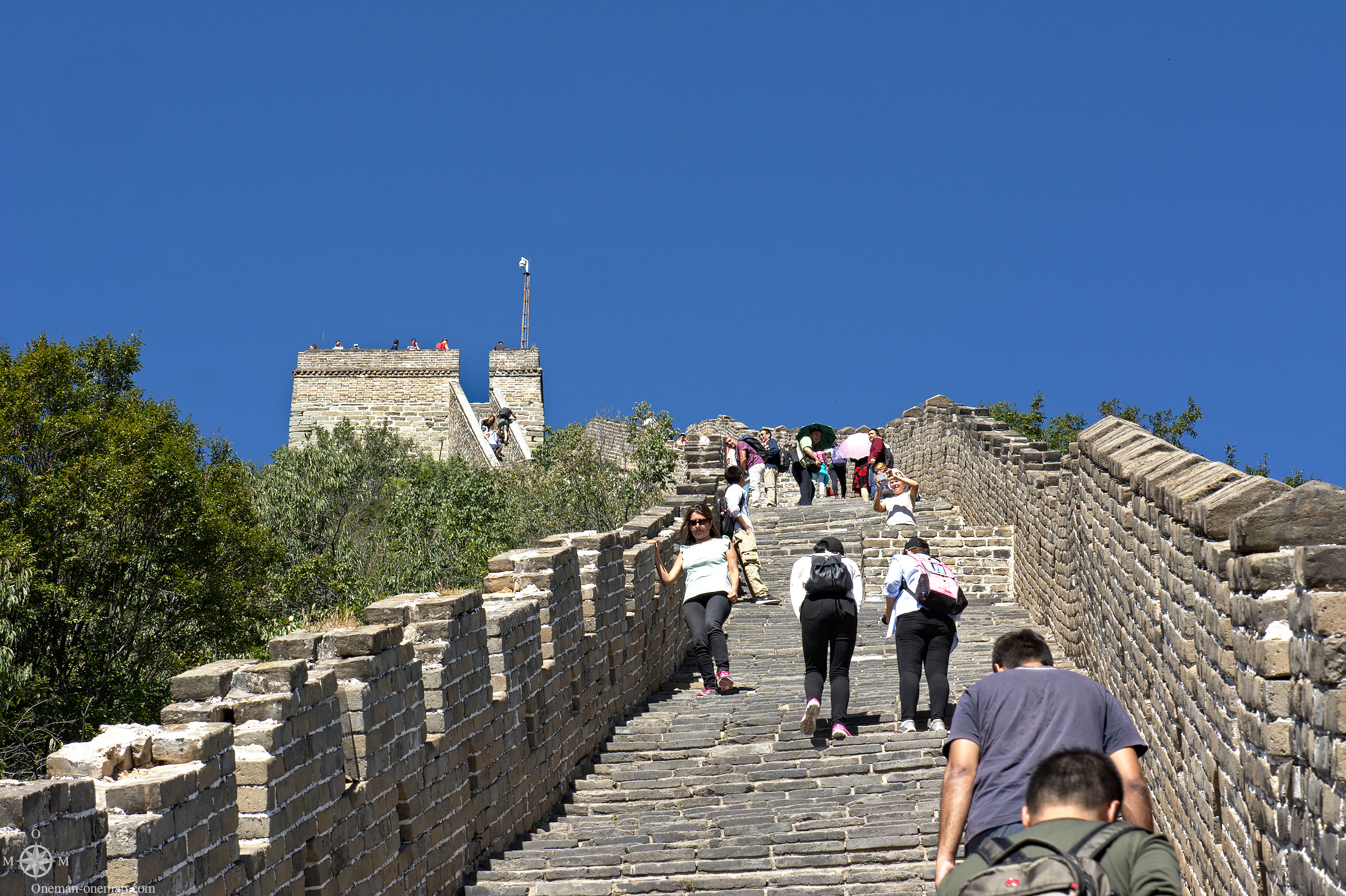 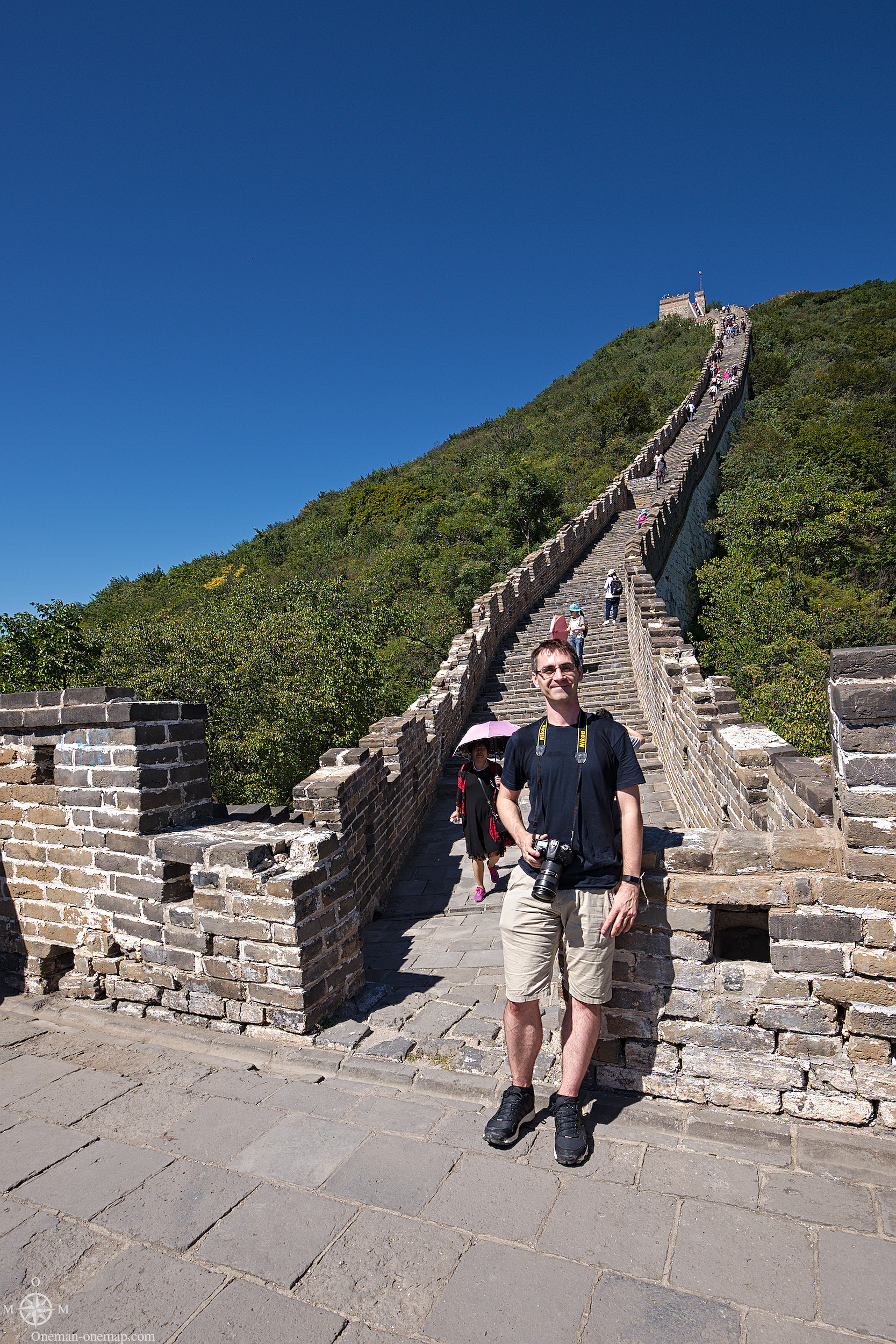 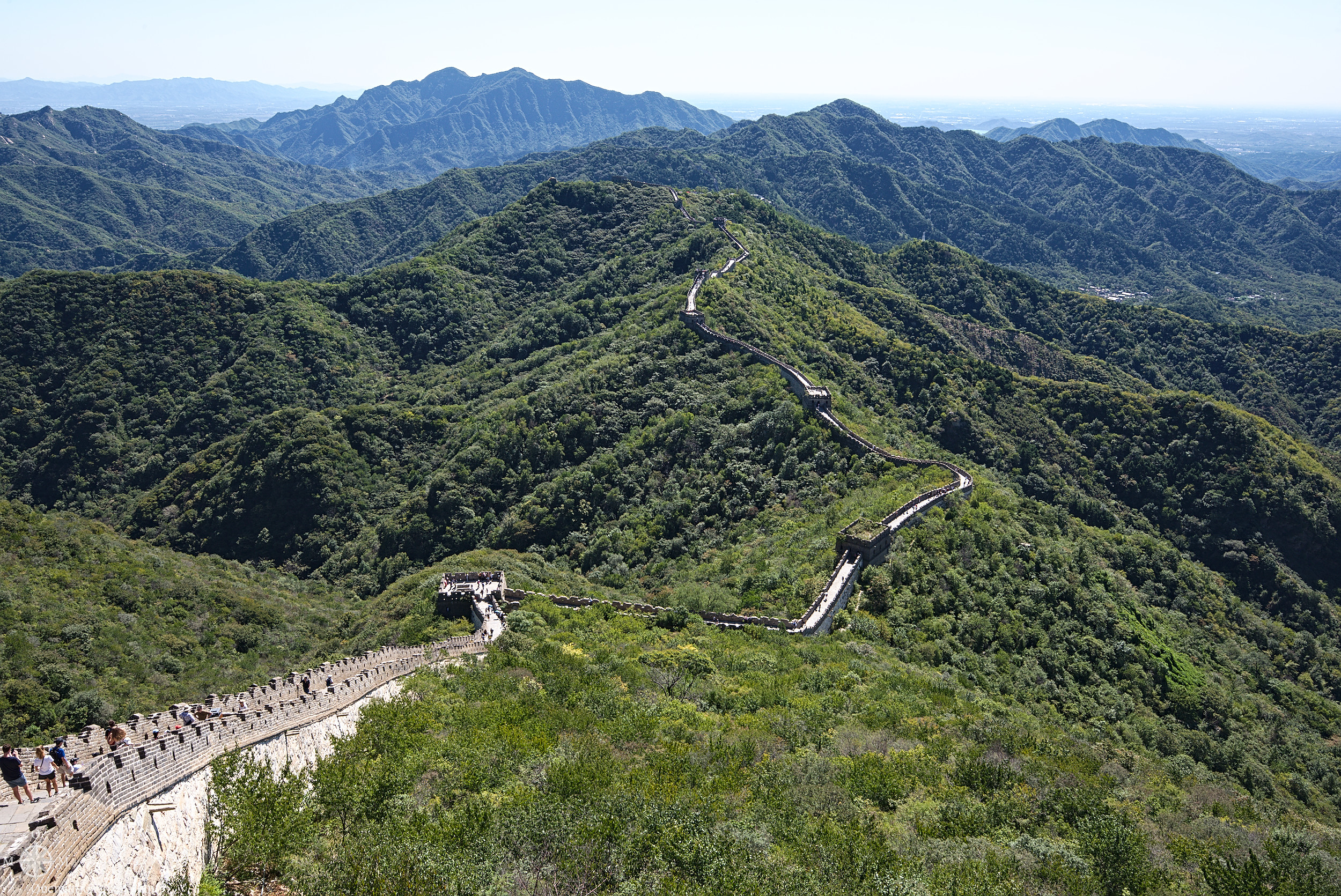 …until I was finally rewarded with the full view at Tower 20. 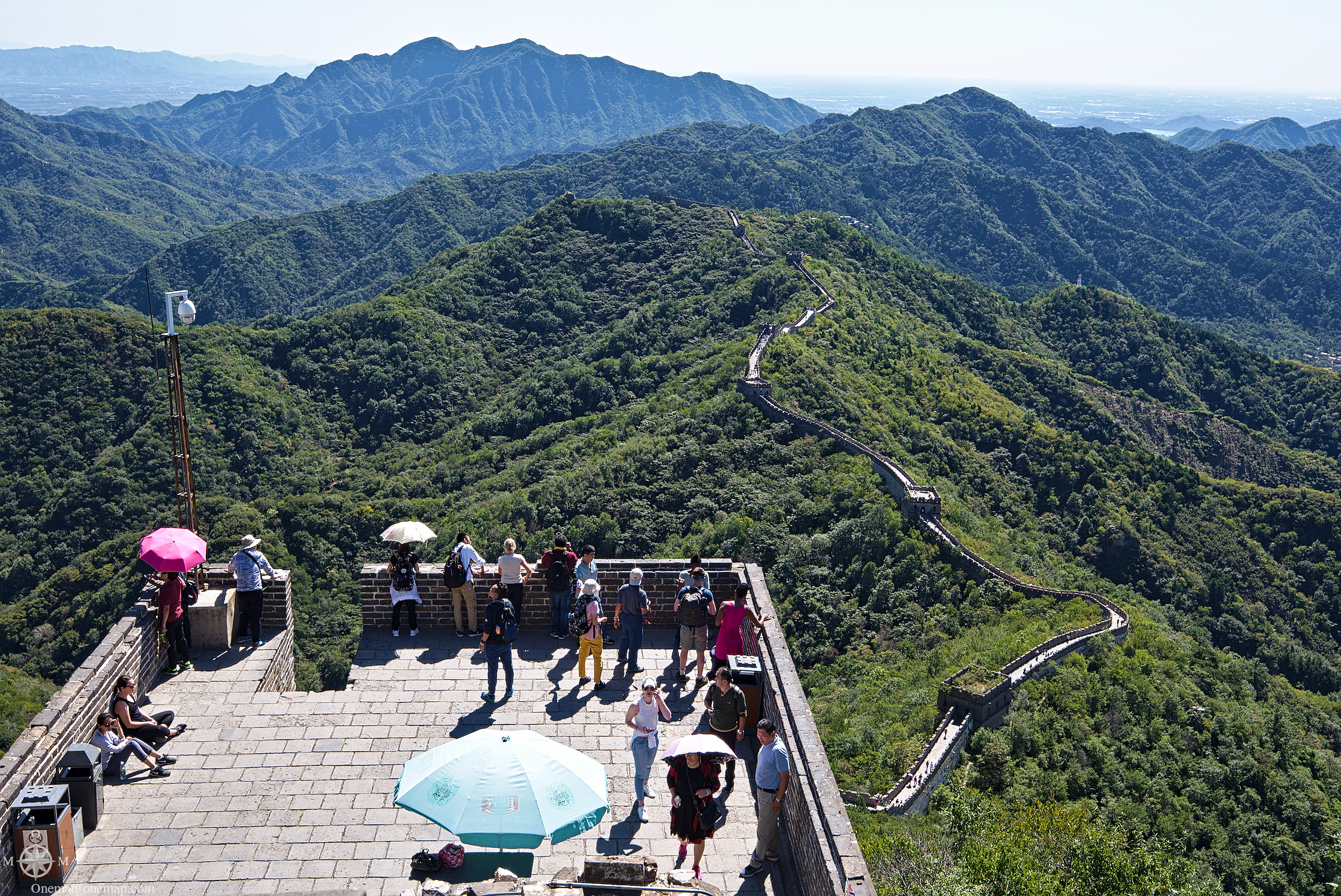 Nature seemed to thrive in this area. Creatures were flattering and crawling left and right, and who knows, what else lurked in the deep forests. 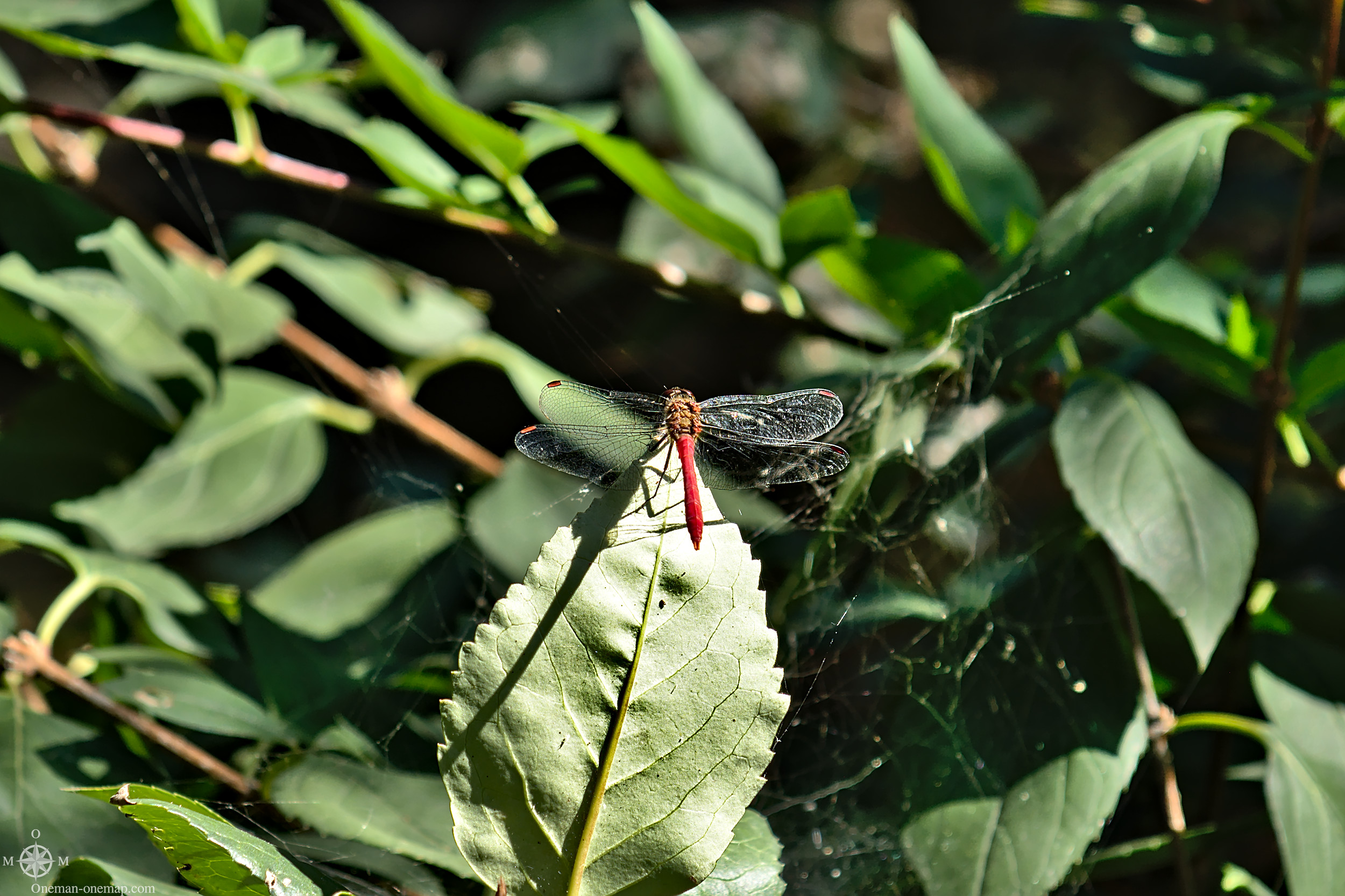 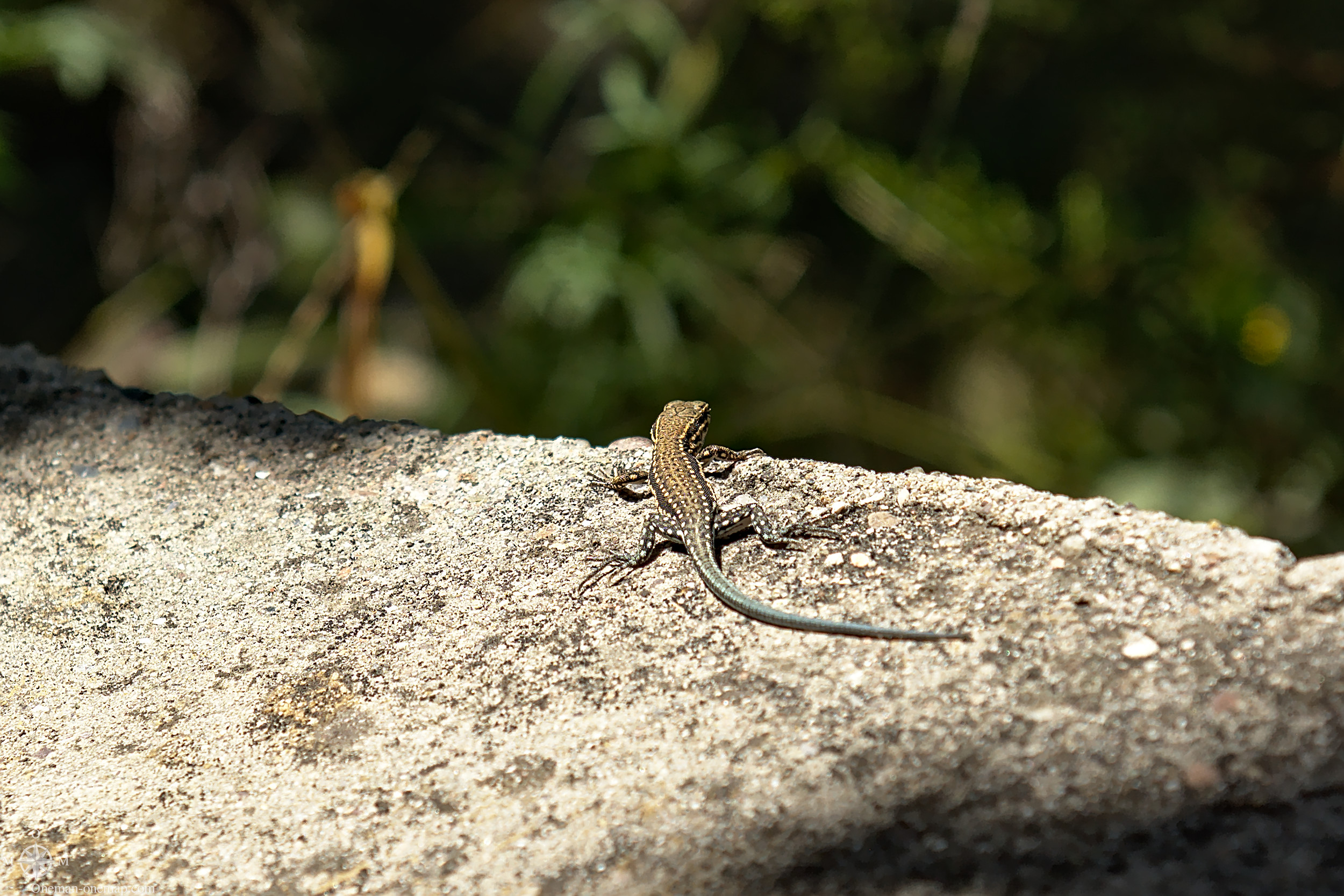 These large insects are Spotted Lanternflies. Over the last couple of years they’ve started to show up in South Korea and the United States of America as well, where they don’t have any natural enemies and are a threat to crops and plants. Surprisingly they’ve survived the winters of Pennsylvania. 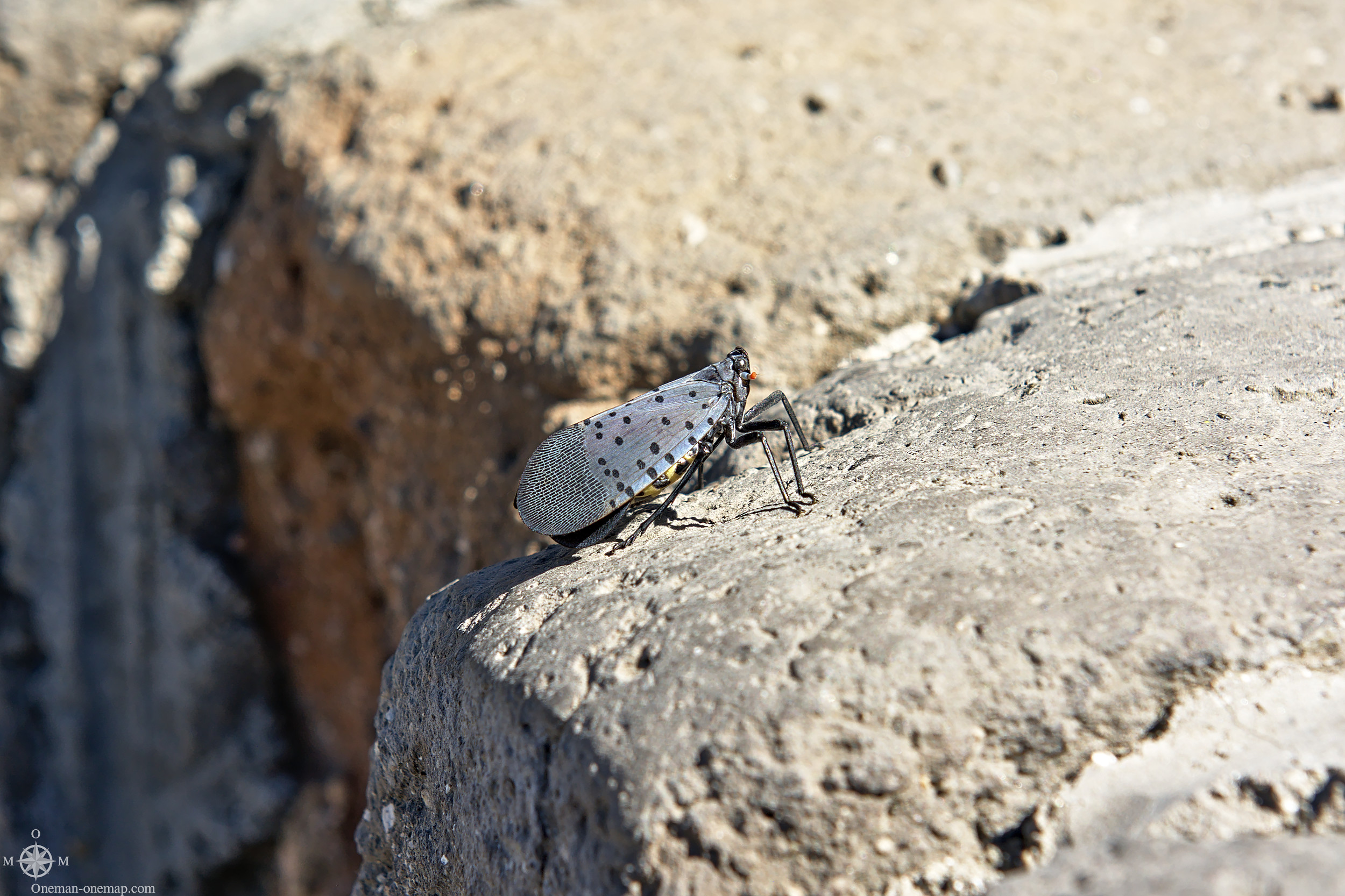 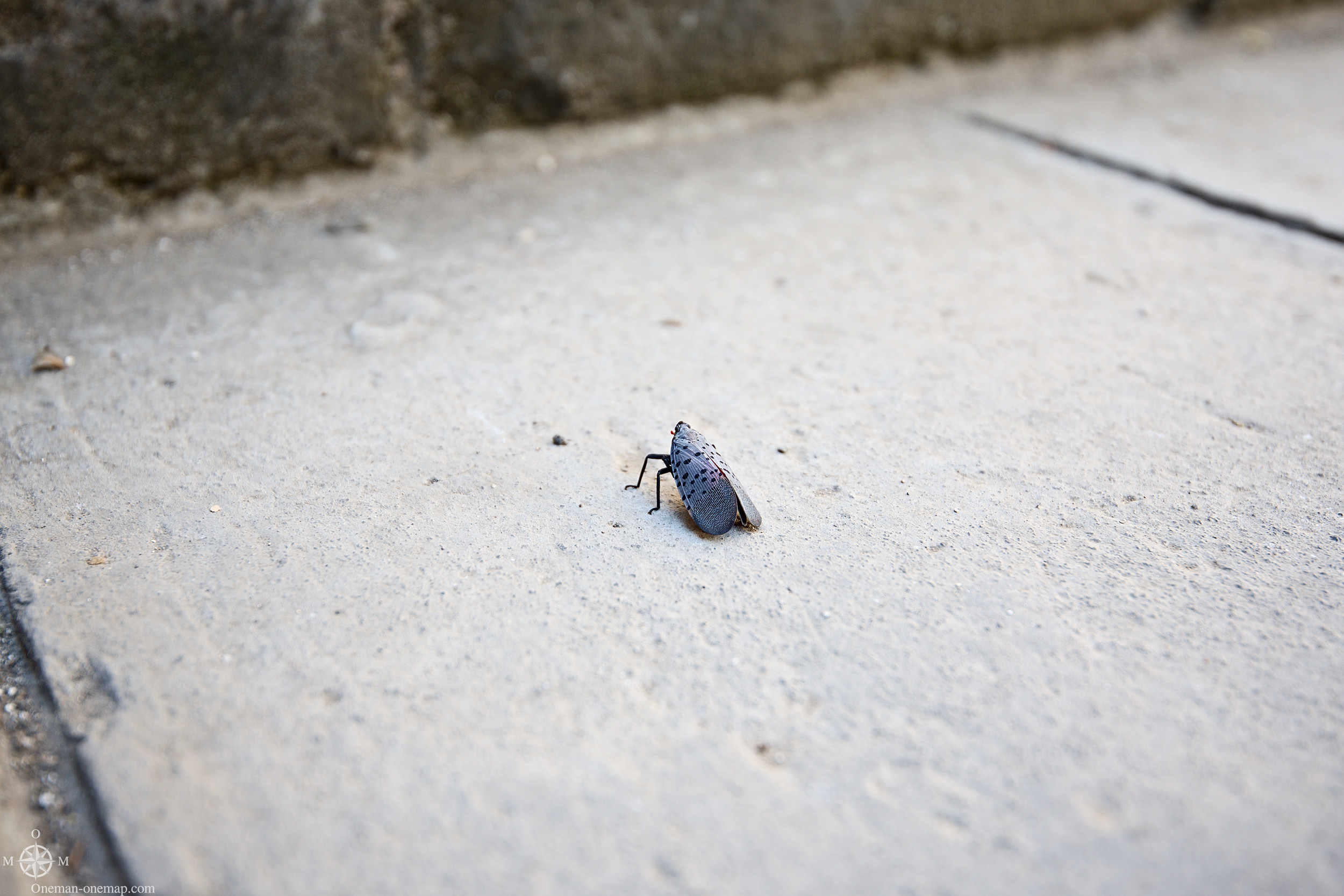 After this exhausting hike I had really earned my lunch. After that we went back to Beijing and to the airport at 5 AM on the next day, abord the plane to the next stop: Seoul! 🙂