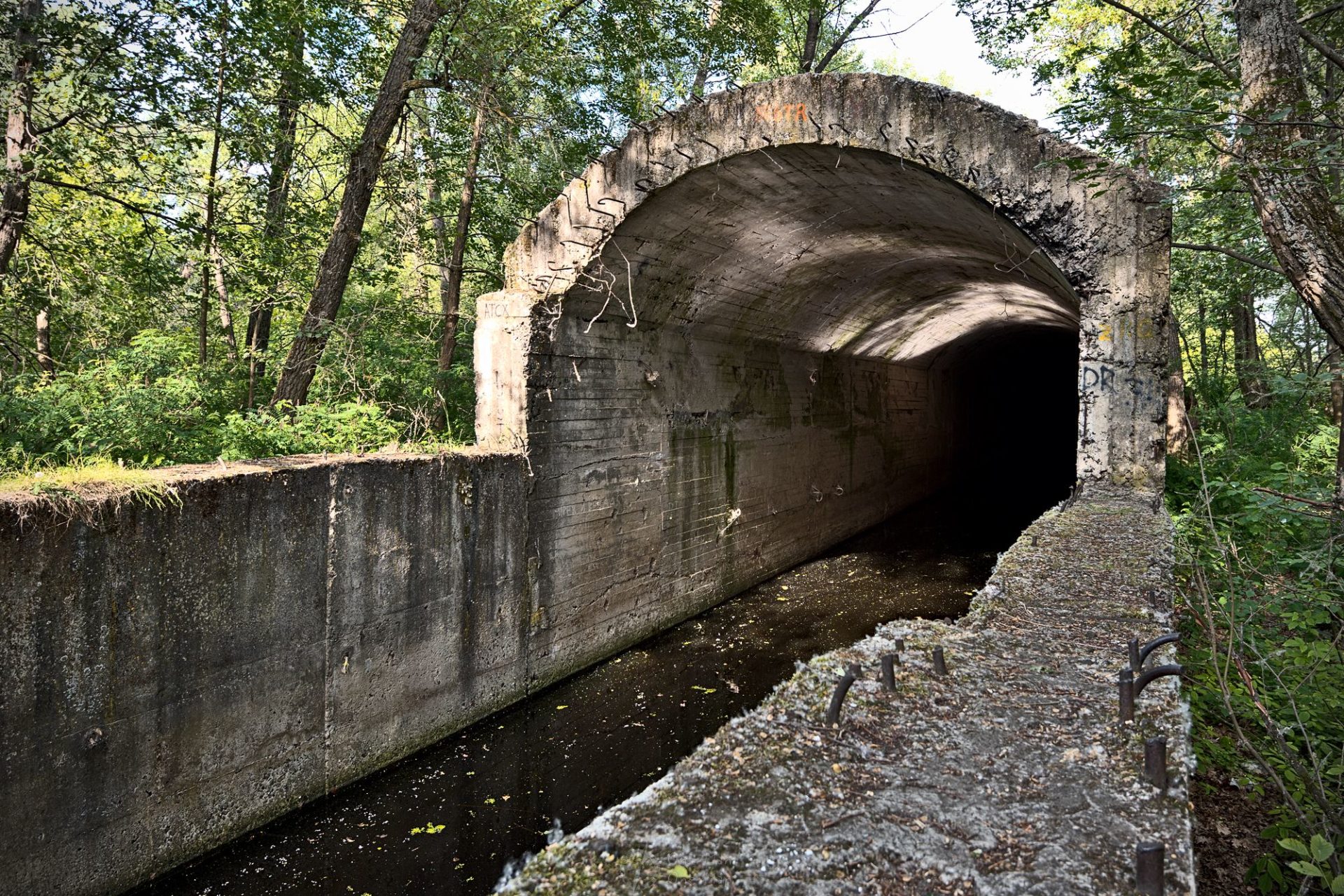 There are probably few views which all of those involved in the armed conflicts of the 20th century shared. One of them was certainly the following: life is safer under the earth than on the surface. The more dreaded the enemy was, the deeper everybody would dig. Lots of examples can be found among my own blog articles: From nuclear commando bunkers in Moscow to the Stalin Line, an abandoned nuclear bunker in Moldova and a WW I bunker in the Alps.

The Soviet Union clearly has the longest tradition in the construction of underground military installations. The construction of the Stalin Line began before work on the Maginot Line was started, and during the Cold War everything was moved deep underground: bunkers, rocket silos, production facilities. Even the subways were extended to serve as nuclear bunkers. New facilities were still built until shortly before the fall of the Iron Curtain. 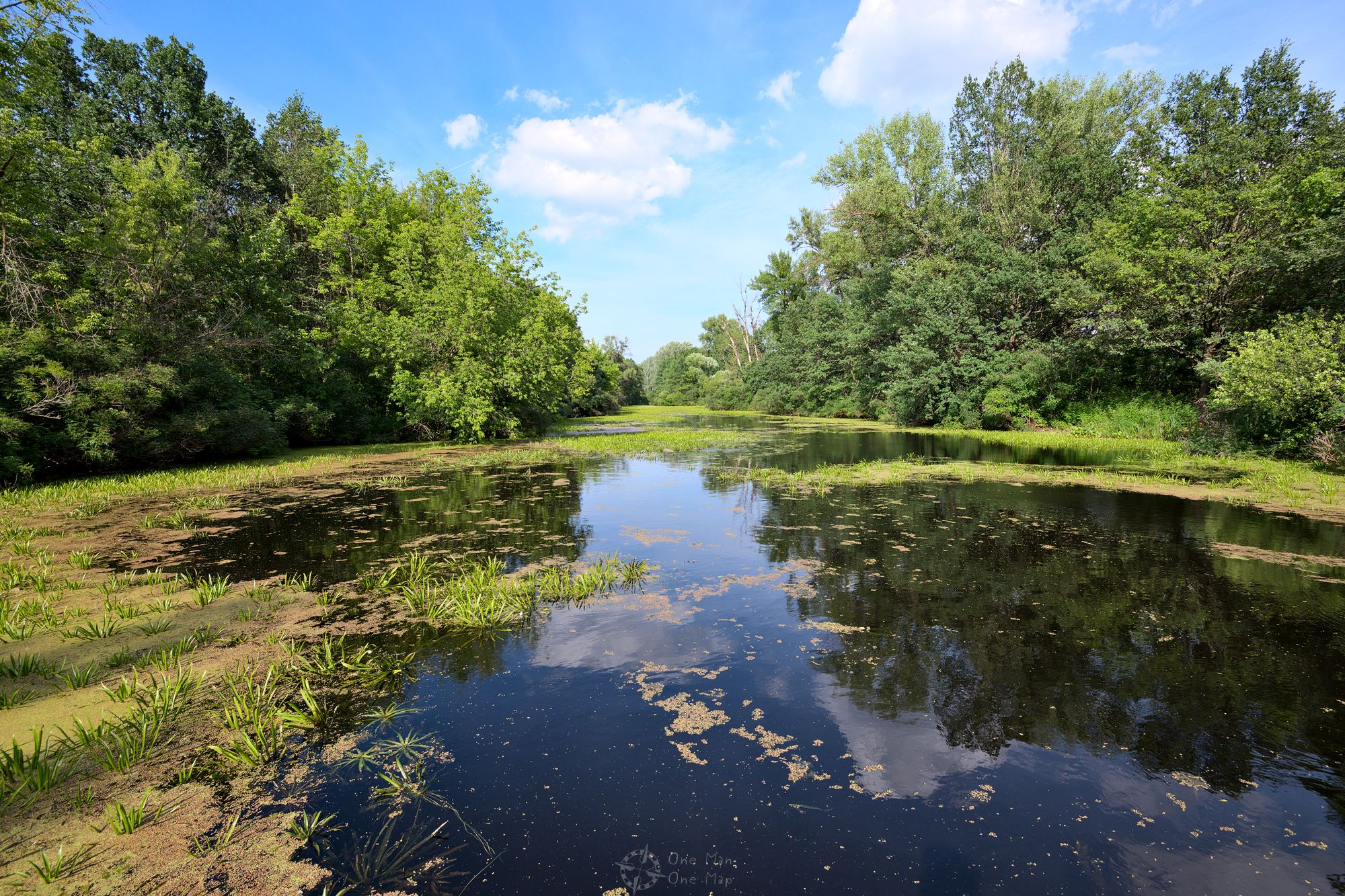 The unfinished tunnels under the Dnieper River near Kiev are a largely unknown and very impressive project due to their sheer size. Even before the outbreak of the Second World War, Stalin recognized the bridges over the great rivers of Eastern Europe as weak points during an eventual attack by the German Reich. The Dnieper River was particularly critical since it is several kilometers wide on most of its course and only few places were suitable for bridges (this is still the case today). The Wehrmacht would have been able to destroy all important bridges on the Dnieper with only a few air raids. This would have meant the end for the city of Kiev and its fortifications, the largest along the entire Stalin Line. All supplies had to be transported over just two railway bridges.

Stalin disliked this thought so much that he saw the only solution in one of his notorious secret projects. Two tunnels, each six and a half kilometers long, were to cross the Dnieper at a depth of up to 32 meters and secure the supply routes at any time. Khrushchev was appointed as the leader of the nine year-long project since he was already responsible for the construction of the Moscow Metro. The actual build order is said to have been issued on October 11, 1938, with the actual works beginning in Spring of 1939. 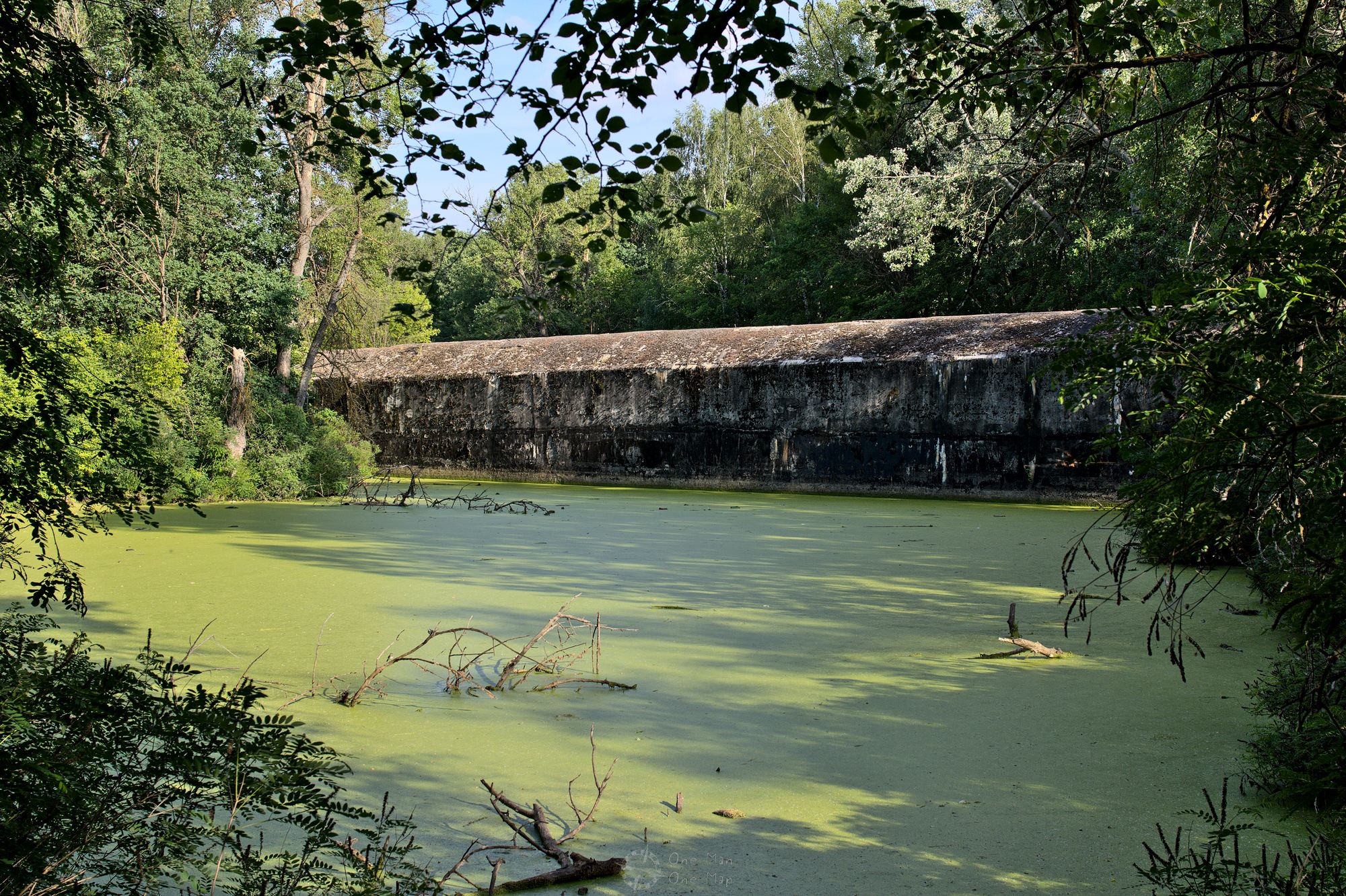 The northern tunnel was supposed to run from the district of Oblon (Оболонь, on the left bank of the Dnieper) to the satellite town of Troieschina (Троєщина, right bank). The only still visible evidence today is a concrete structure about 50 meters long, 15 meters wide and 15 meters high in a park on the banks of the Dnieper River near Oblon. Many sources refer to this construction as a tunnel entrance, but in fact it is a caisson for construction work in the river.

The tunnels were not only dug from the shore, but at the same time also from the middle. After the caisson had been lowered to the bottom of the river, the workers climbed into a working chamber through a vertical tube and dug out the centerpiece. After 70 centimeters of progress a concrete ring was inserted to stabilise the tunnel. The working chamber was pressurized at two to five bar of overpressure to keep the water out. A very efficient strategy from a technical point of view, but – the divers among the readers probably already have a bad feeling – quite dangerous for the workers. At a pressure of four bar, each work shift could take only 40 minutes at maximum, but still there were numerous complications due to decompression sickness.

A few years ago someone came up with the idea to convert the caisson left behind in the park into a café. This plan has not been implemented yet. 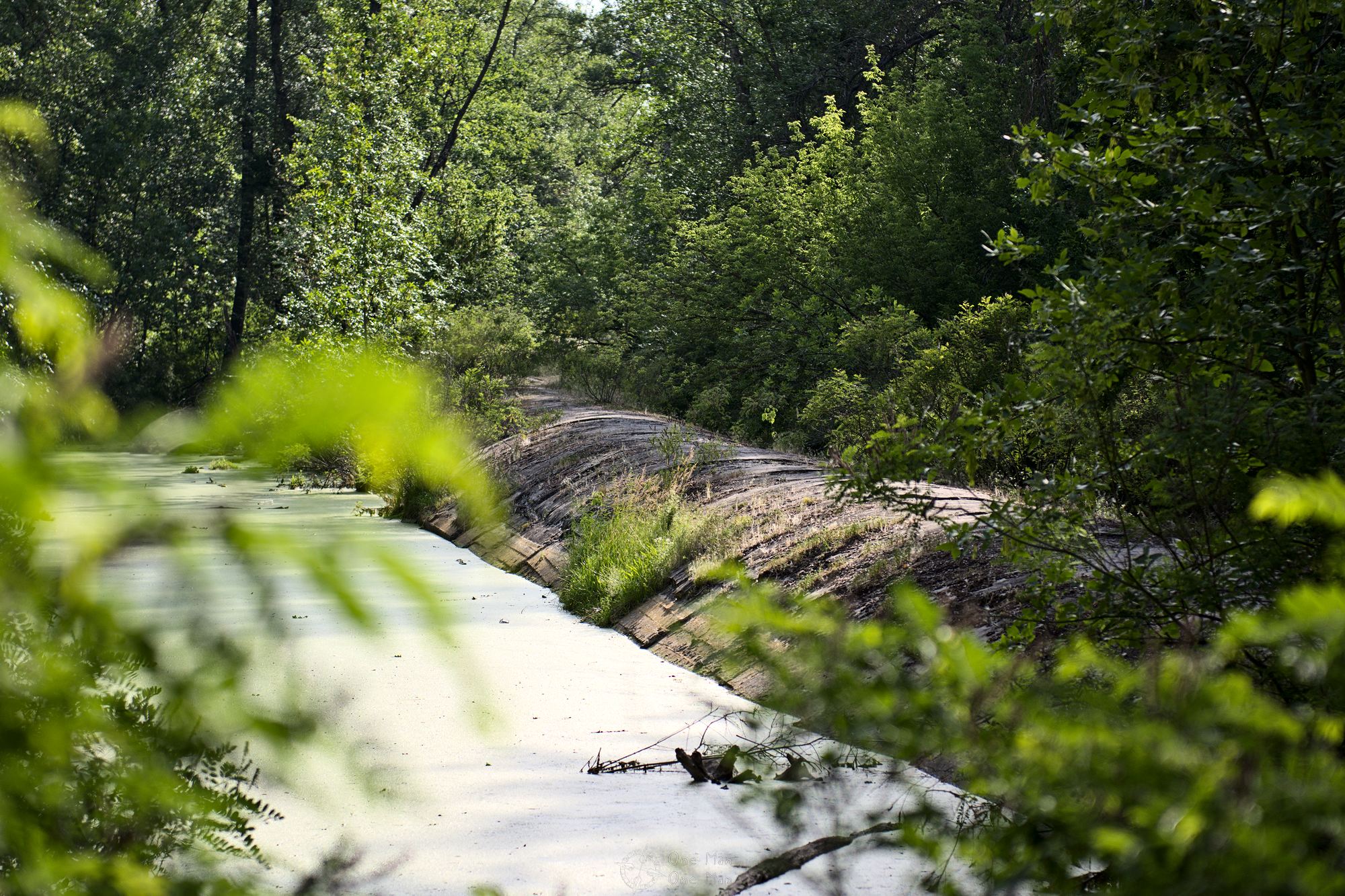 The southern tunnel was supposed to run from the so-called Cossack Island (Козацький острів, left bank of the Dnieper) to the district of Osokorki (Осокорки, right bank). The pictures in this post are from Cossack Island, where the longest and most interesting part of the whole construction is easily accessible. The part of the tube above the earth/water was already clearly visible from the car. 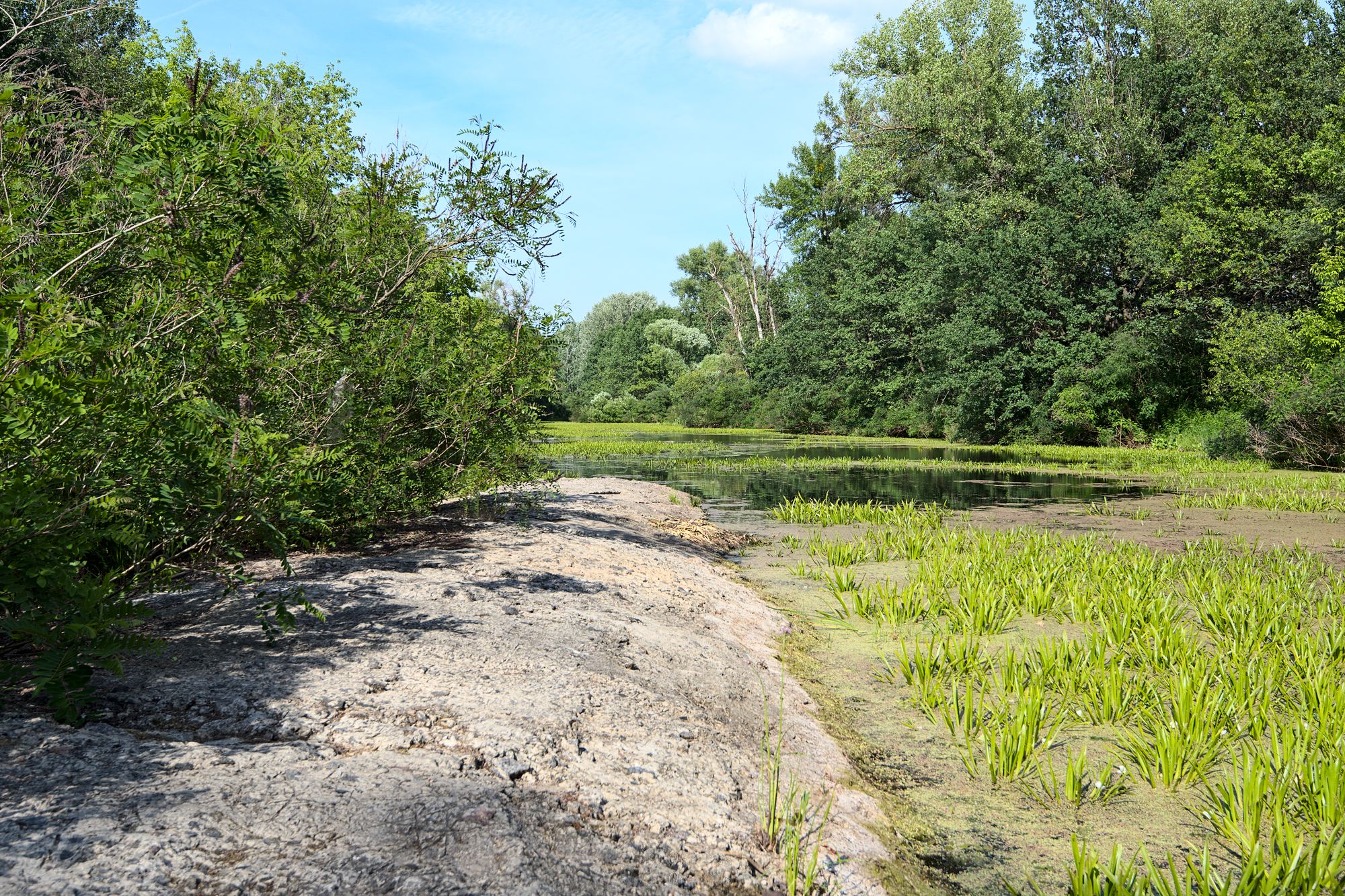 Towards the Dnieper (towards East), the tube descends and eventually disappears in the swamp. At this point one can easily step on the top and walk the ~600 meters to the entrance in the West. As you can see in the pictures, nature has recaptured the whole area long ago. The swamps are home to waterfowl and fish as well as beavers. 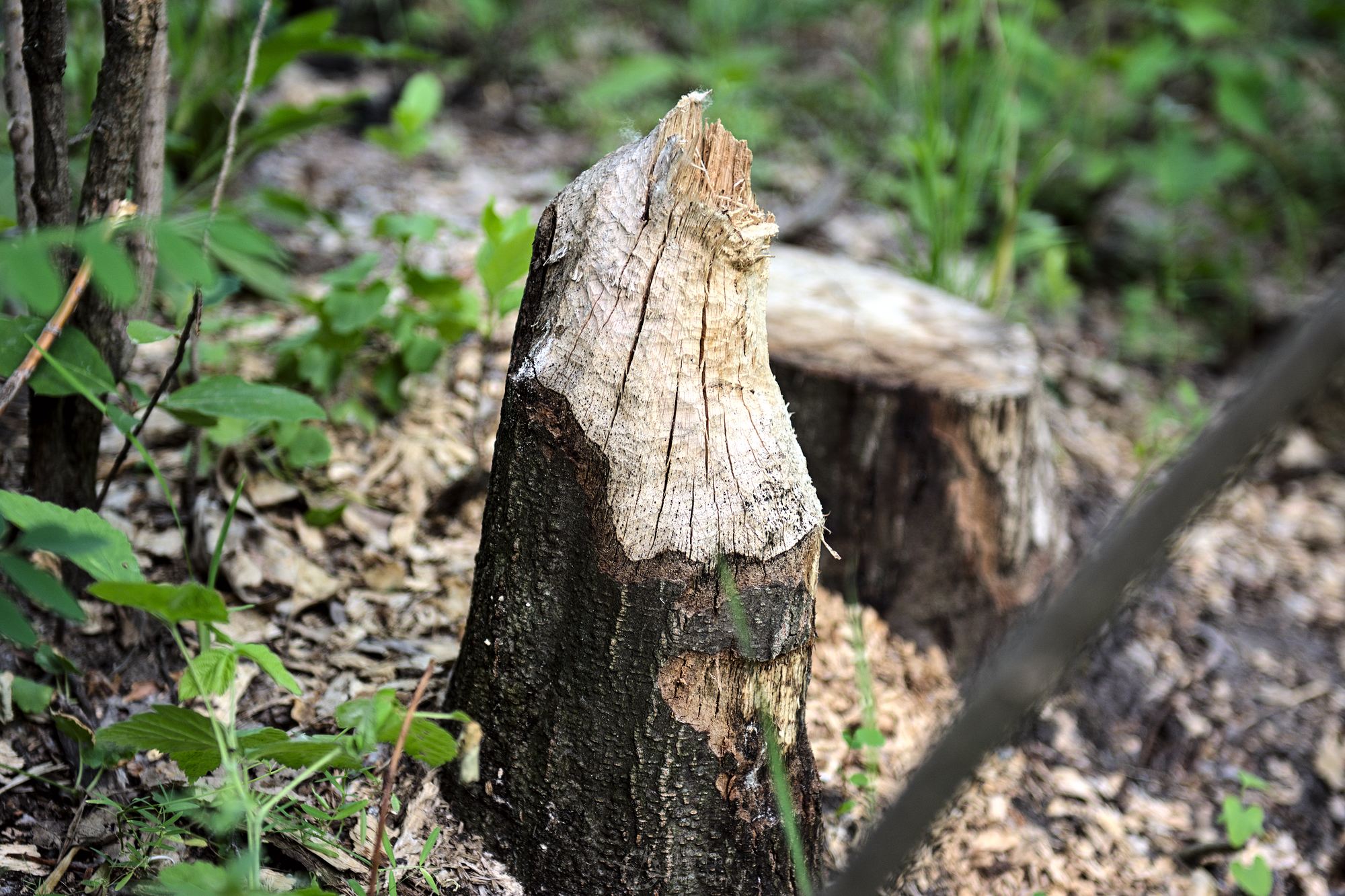 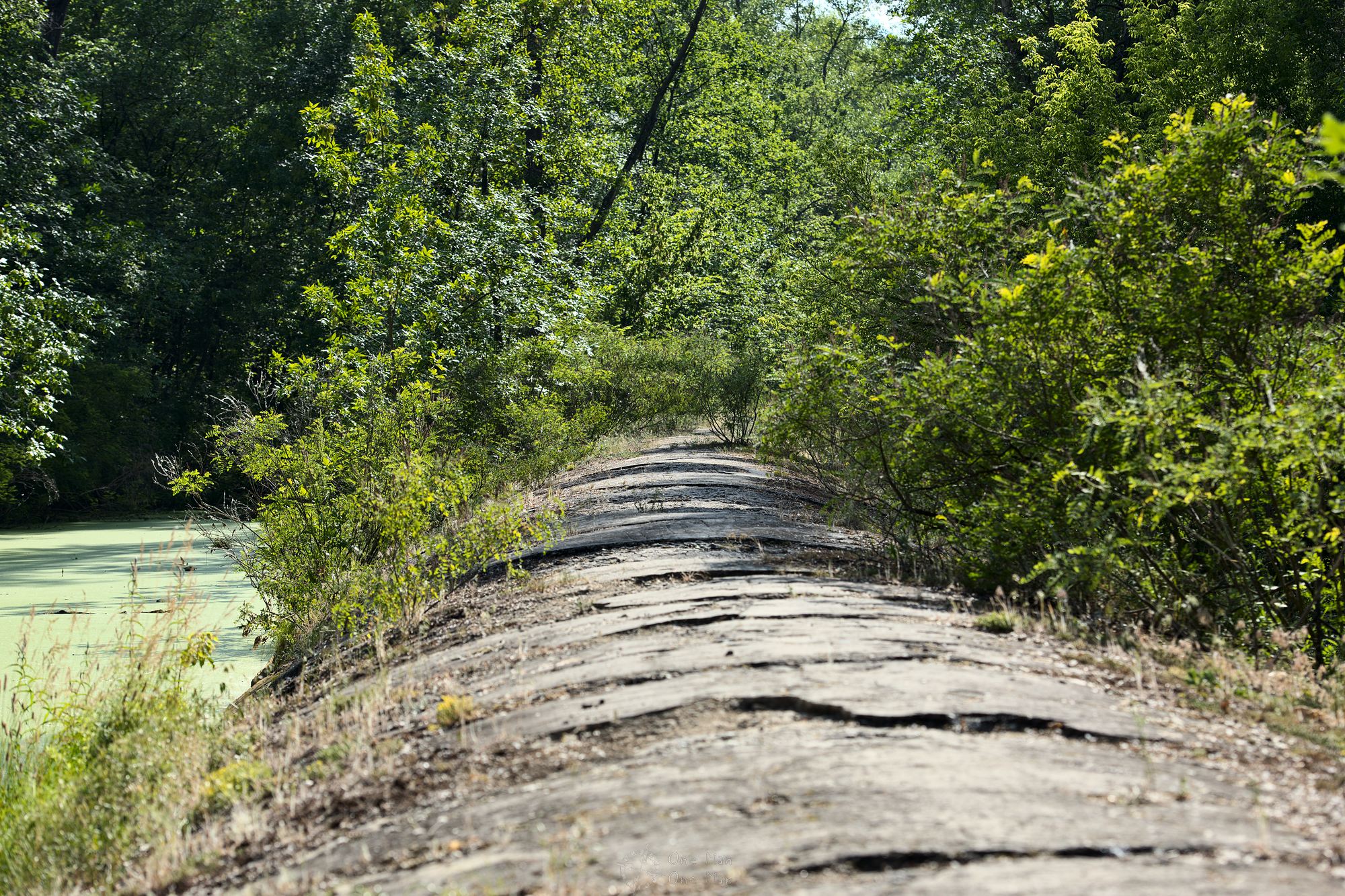 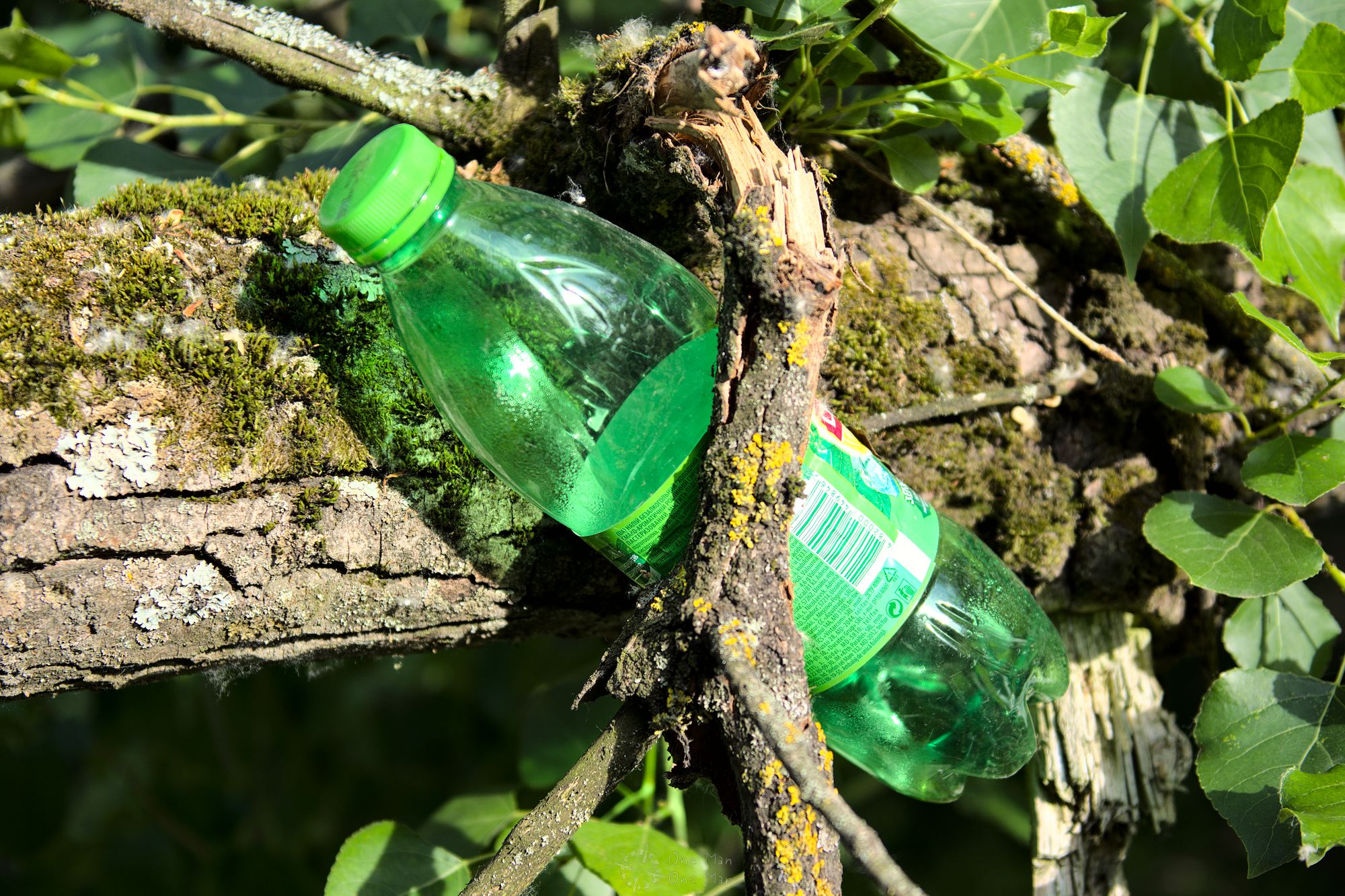 The two tunnels included twelve additional lots (called “titles”), including the stabilization of the river bank, the construction of access roads and buildings, and the installation of electricity, water and communication lines. In order to secure the power supply of the tunnels, a power plant and a ring line which connected all power stations in Kiev were built.

At the start of construction in 1939, a total of 2,500 specially selected workers were involved in the project. Absolute secrecy was the highest priority. Every thoughtless use of the word “tunnel” in public supposedly led to immediate sentencing to ten years in a prison camp. 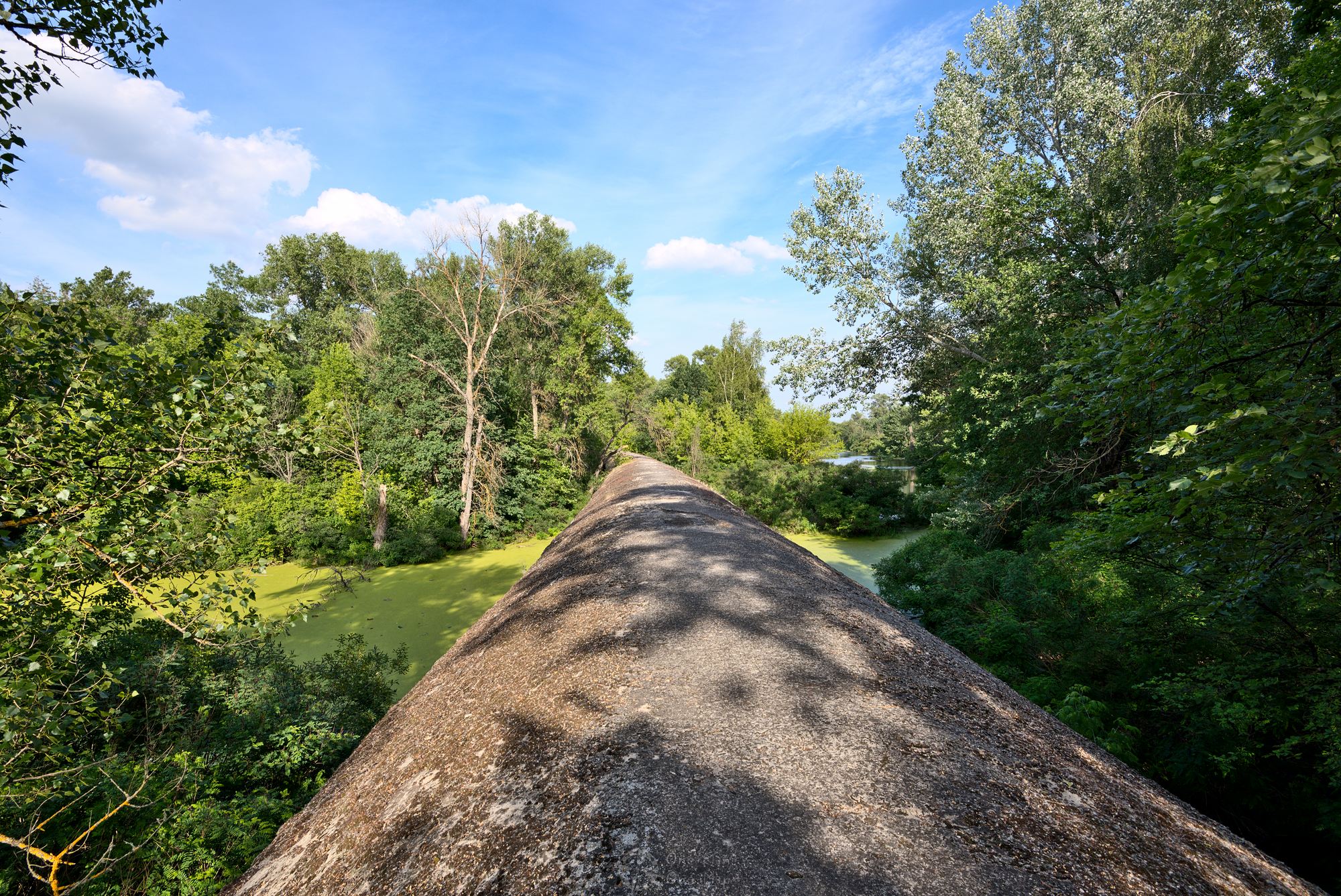 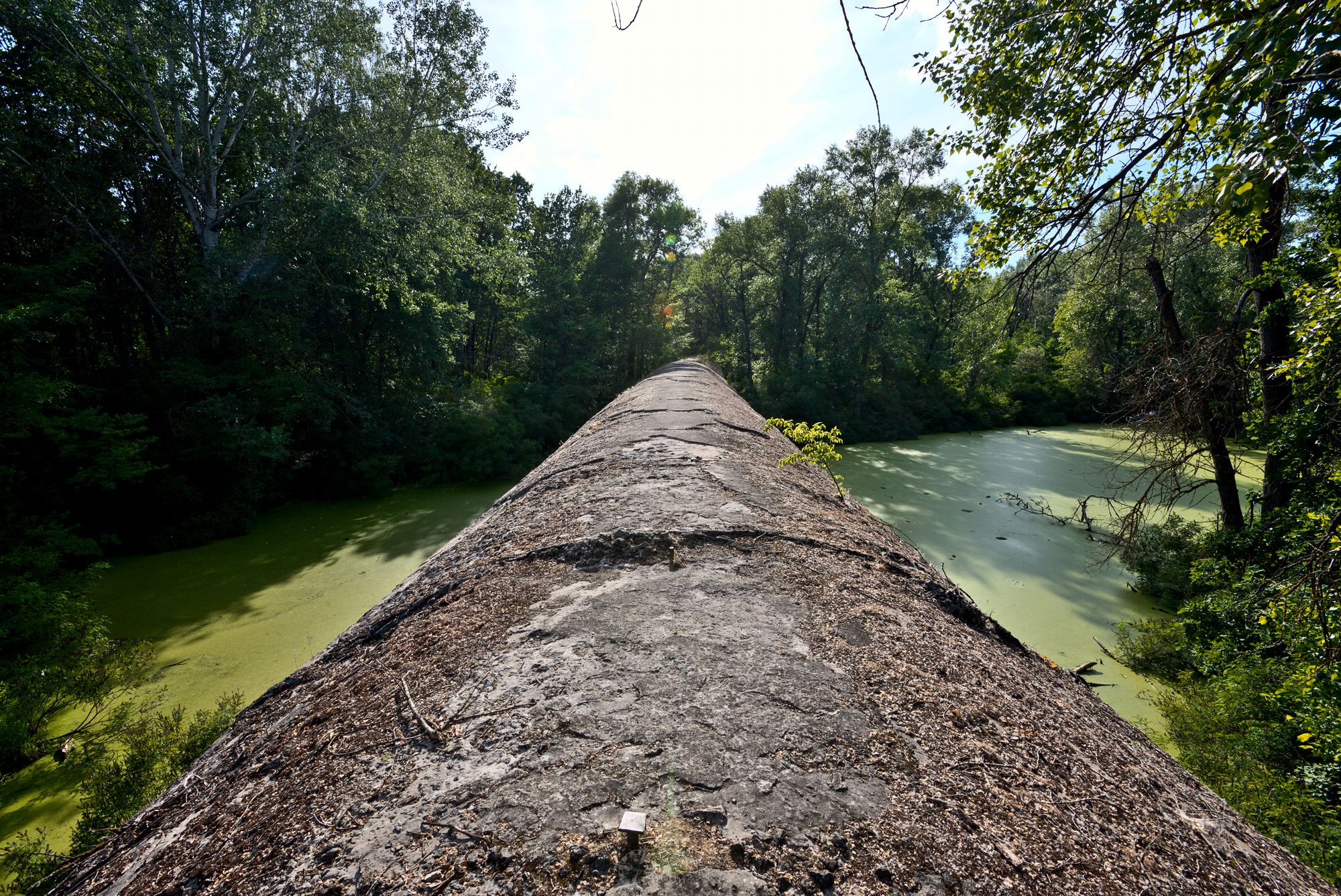 Although Germany and the Soviet Union signed a non-aggression pact in August 1939, work on the tunnels was not stopped. On the contrary. At the end of 1939, the number of workers had already been increased to 10,000 and then to more than 12,000 in 1940. The southern tunnel was to be the first to go into operation in the year 1944. 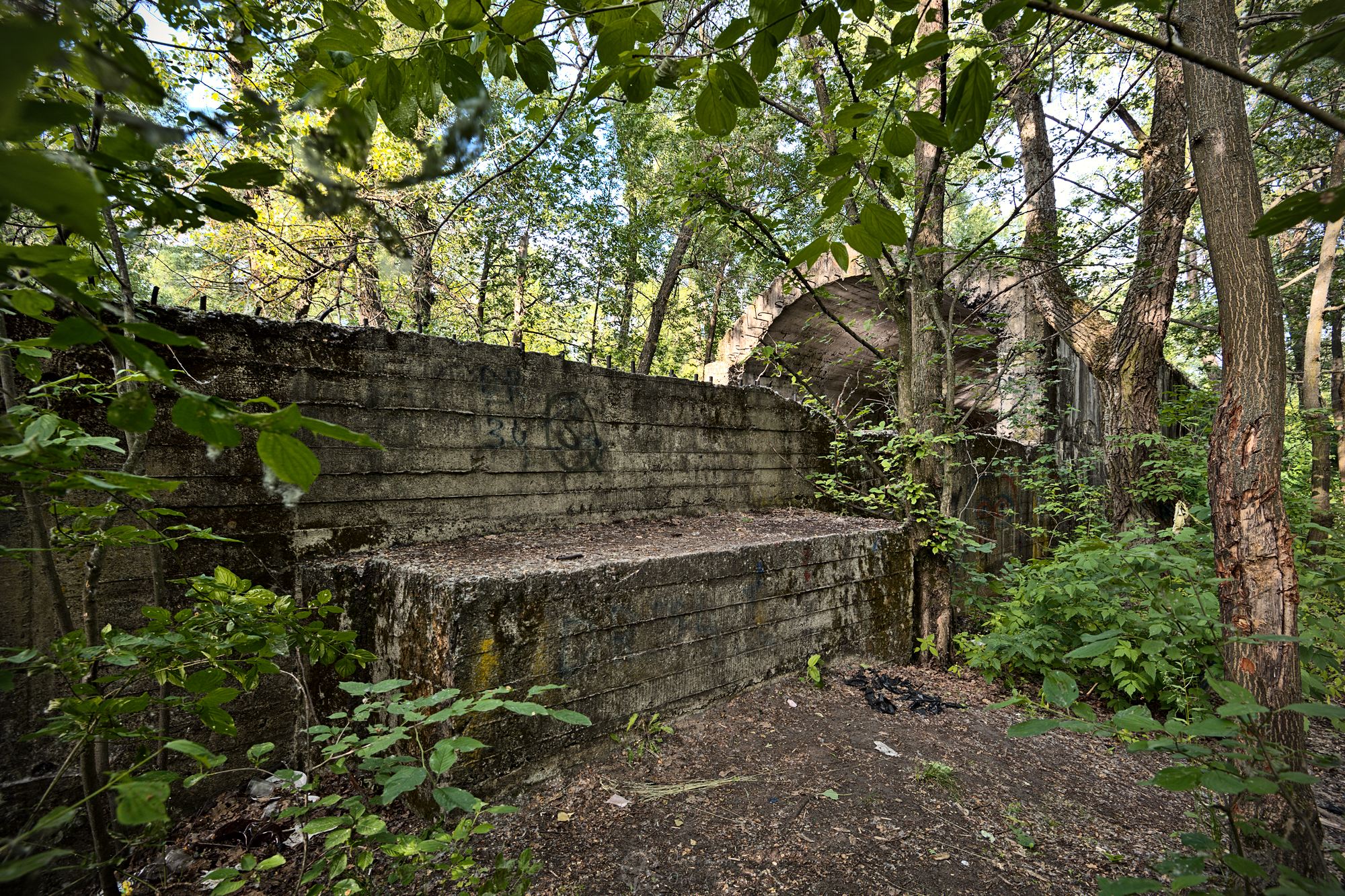 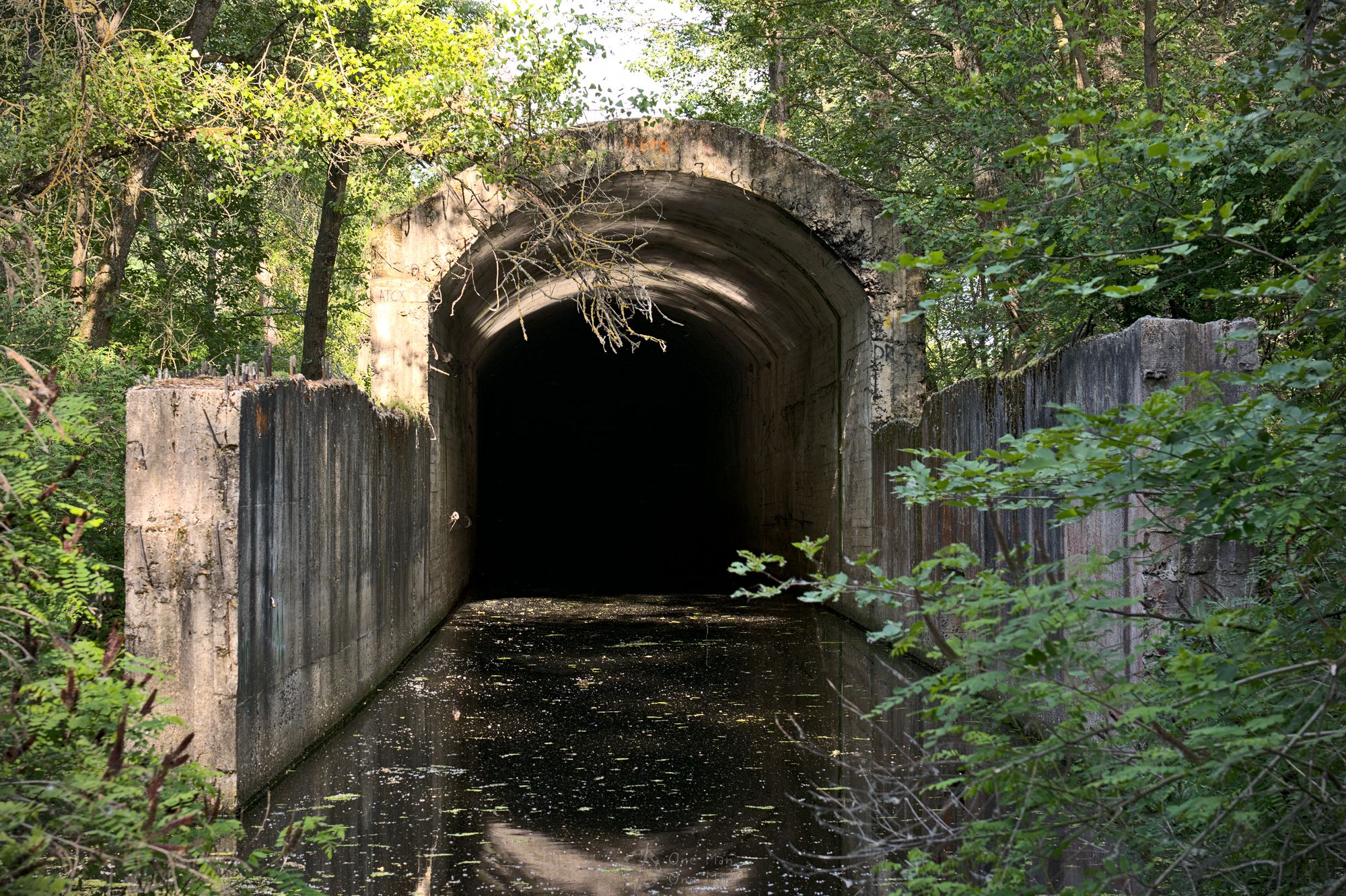 On the western side one can find the entrance and some other ruins. The tunnel was wide enough to fit one track per direction, but if required the tracks could be covered with plates to make the tunnel passable for trucks and tanks. 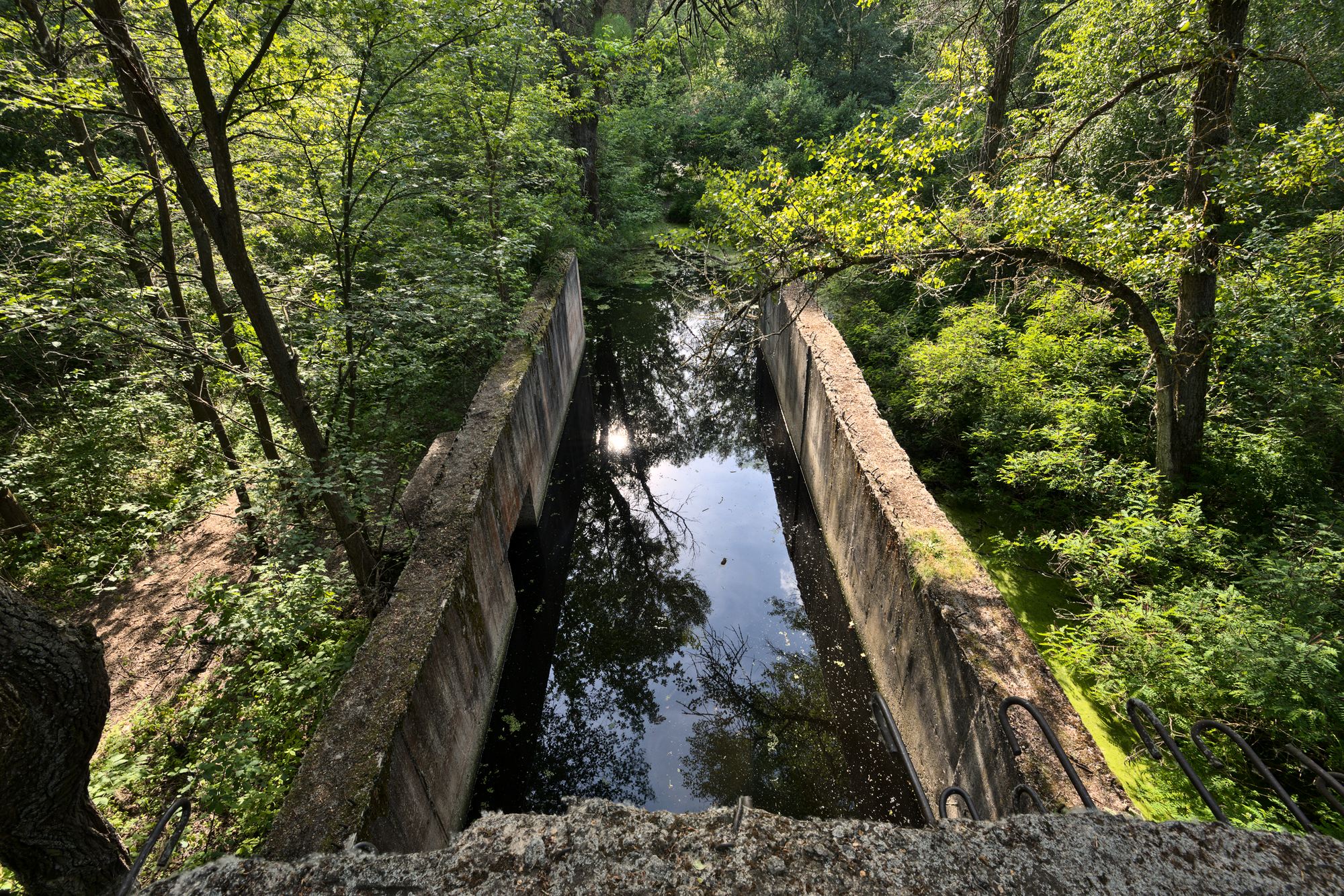 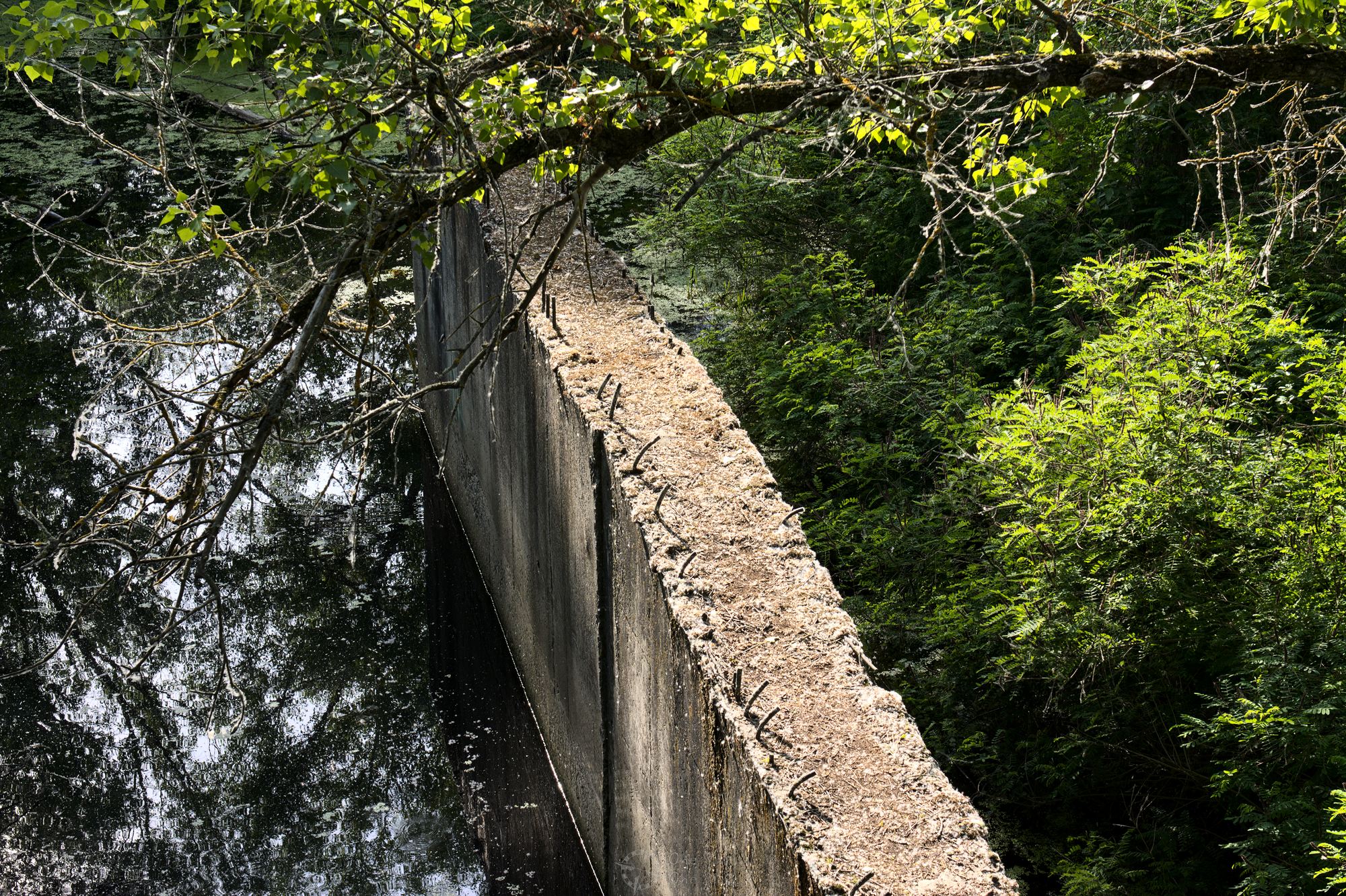 The tunnel is almost always submerged and can be navigated with canoes or small boats. In very cold winters, it was allegedly also possible to walk into the tunnel on foot on the ice. 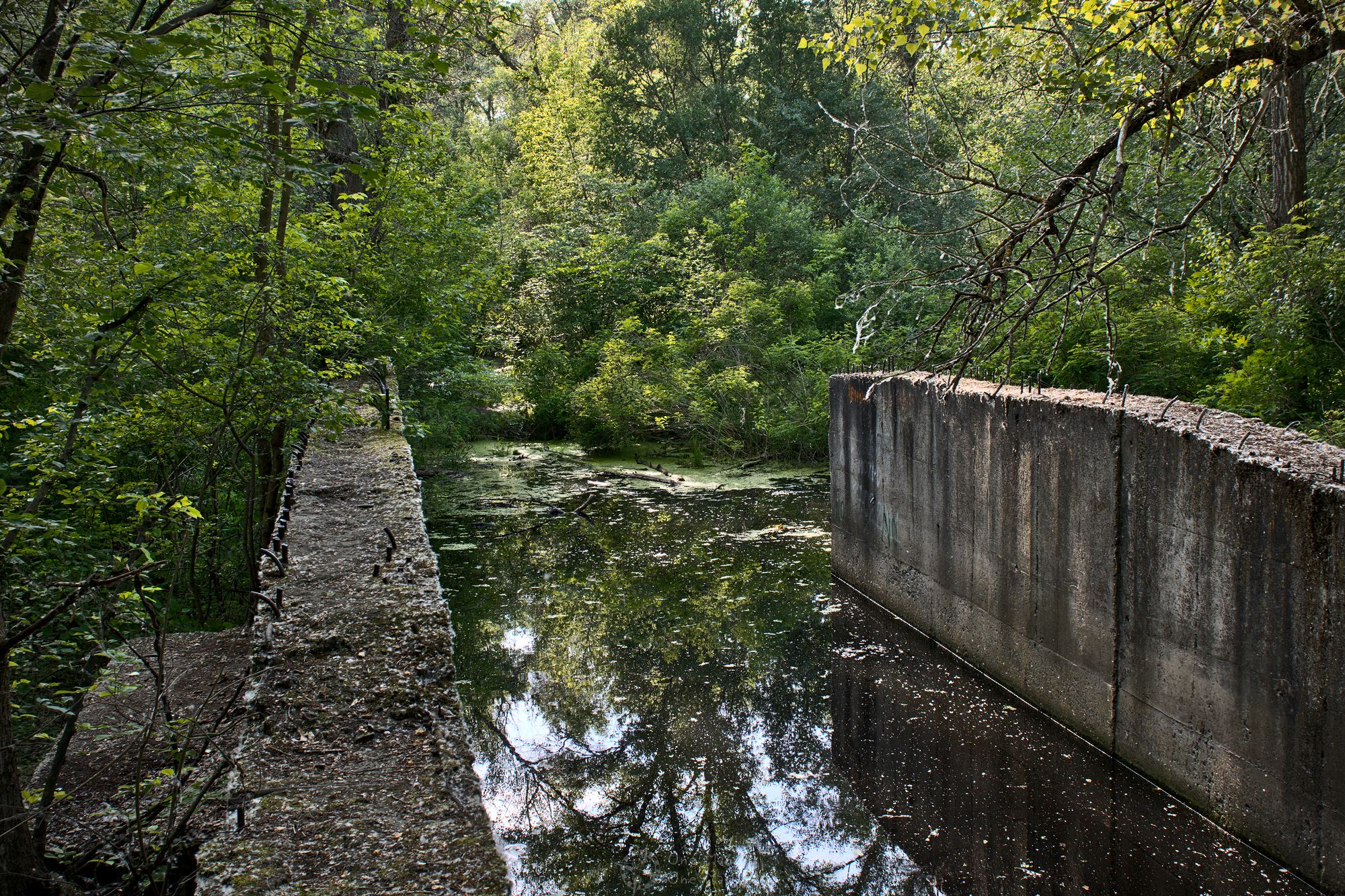 In February 1941 a major accident happened: the compressed air from one of the working chambers escaped in sandy underground and one of the tunnels was filled with water. The repair works were pushed forward at full force. When the Wehrmacht reached Kiev in August 1941, the Soviet leadership initially believed it could defend the city. The workers were therefore not drafted for the military and continued working, even though they could already hear the battle noises from the front. It quickly became clear though that the Germans would encircle the area and take over Kiev. All machinery was removed or mothballed, the tunnels flooded and the construction sites paved over.

In August 1944, a few months after the Red Army liberated Kiev, construction work on the southern tunnel was resumed. In 1949, however, the Soviets finally gave up on both tunnels, blasted parts of the entrances and filled them with concrete. It is unclear how far the construction works had progressed by that time. One of the sources mentions 154 meters of tunnel at the caisson in Oblon and 191 meters at the caisson plus 700 meters of land tunnel on Cossack Island. This is consistent with other sources which claim that just ten percent of the total twelve to thirteen kilometers uf tunnel works had been completed by August 1941.

The already installed metal pipes were used for the construction of the Kiew Metro in the 1950s, and former project leader Konstantin Kuznetsov was sent to build the St. Petersburg Metro. Since then all the remains have been left to rot. 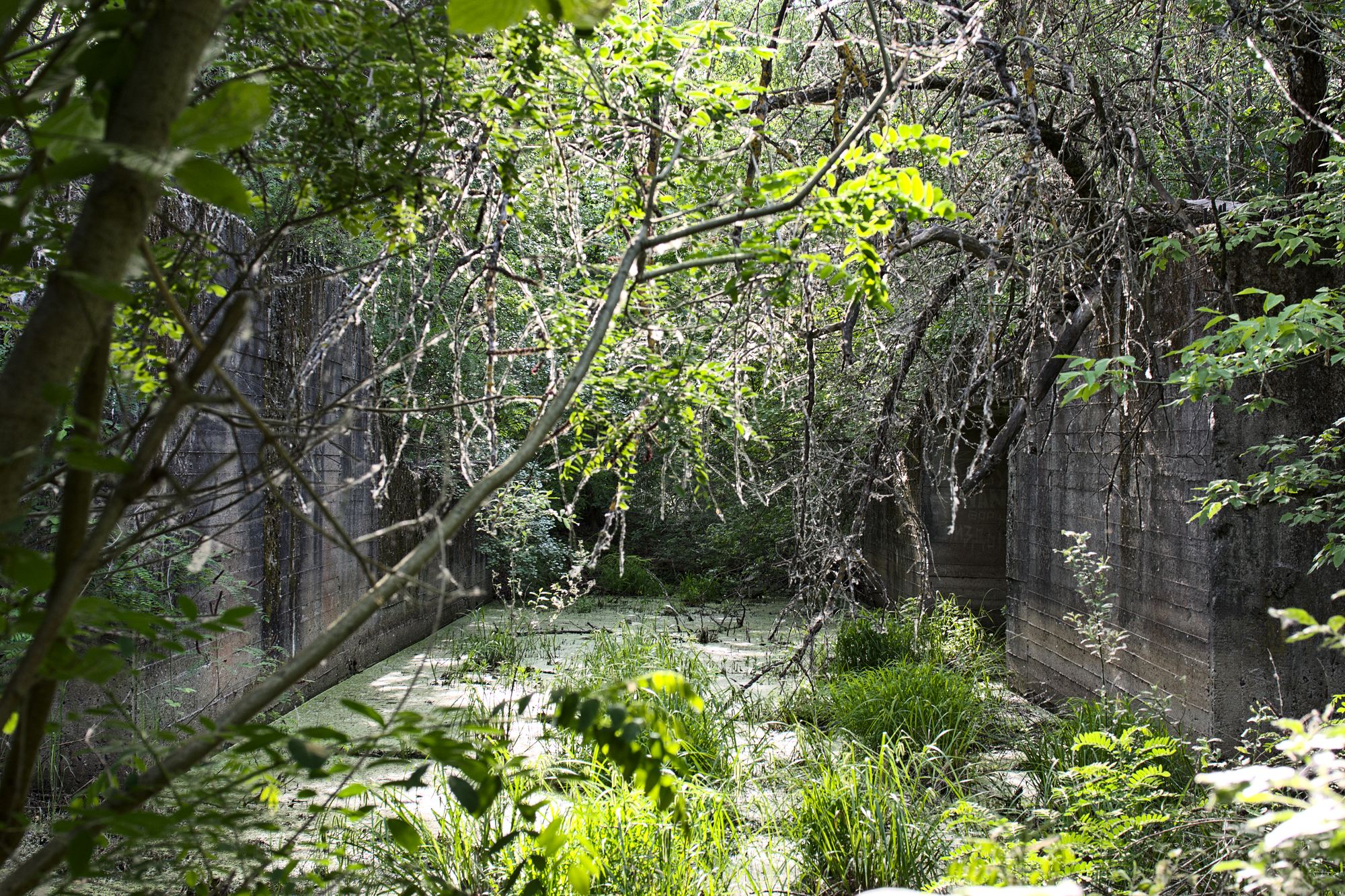 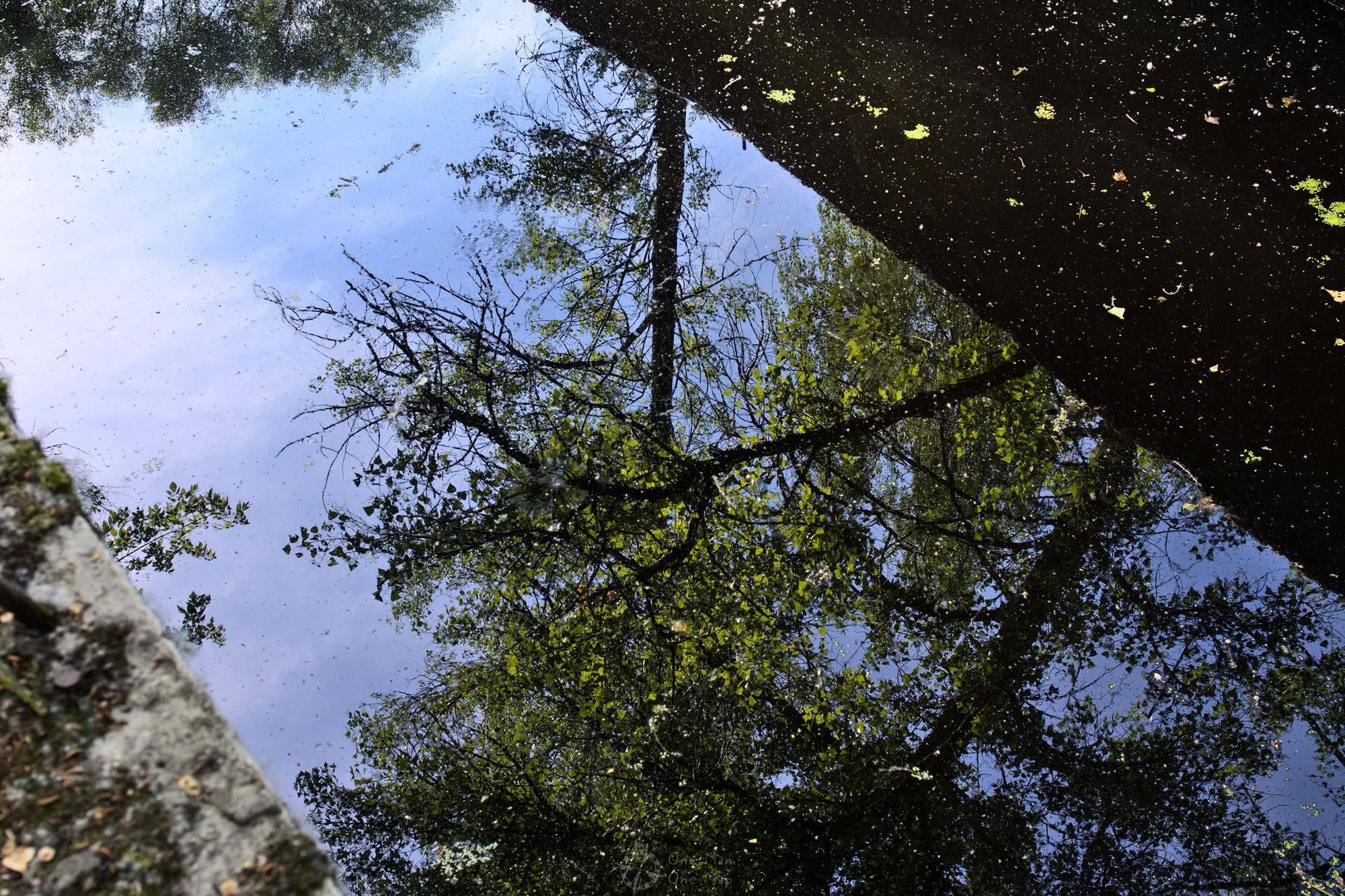 Since other websites already list the coordinates of the three remaining entrances and nothing of value can be destroyed here, just for once (!) I will mention the locations: