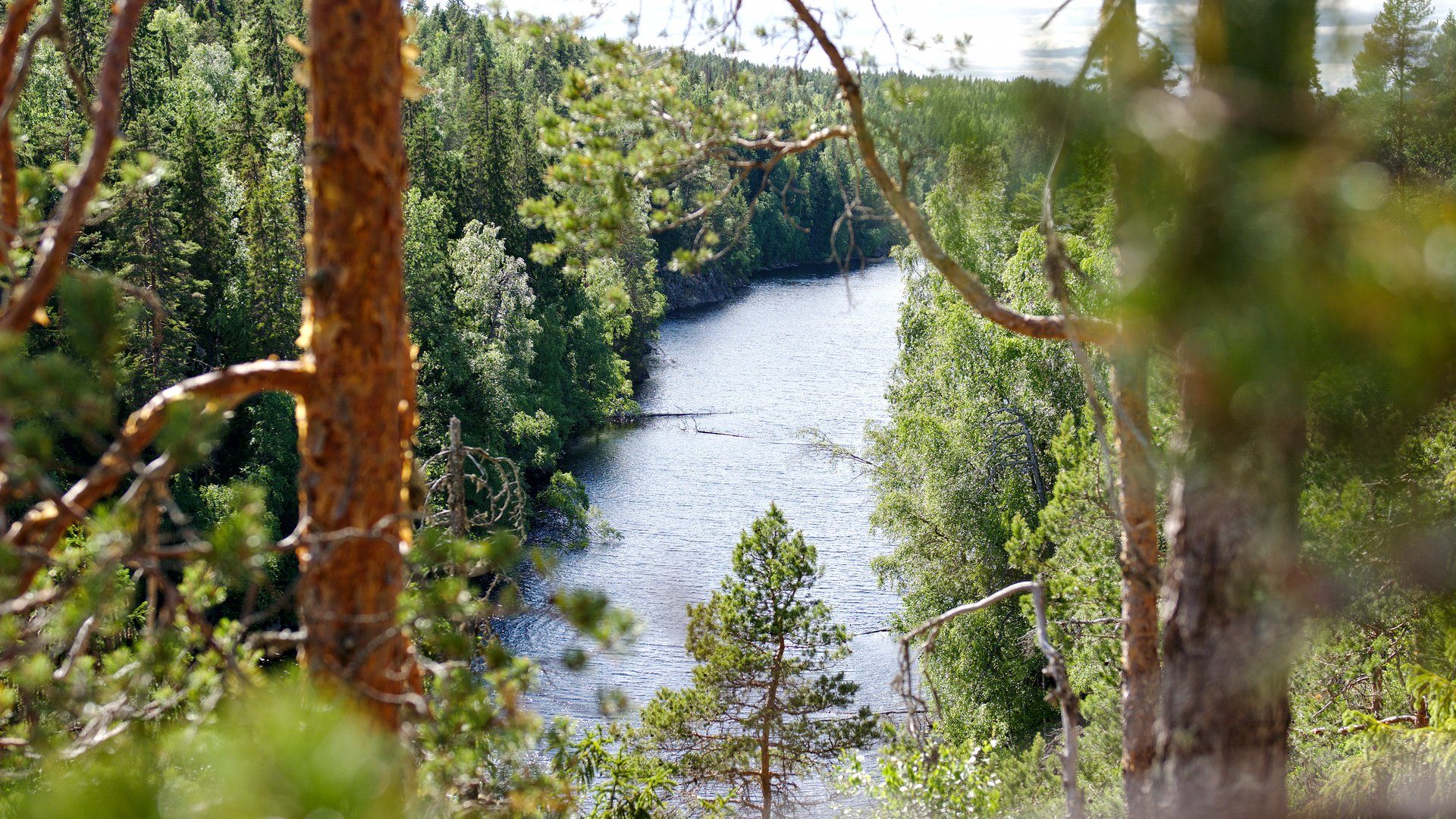 A whole network of hiking trails leads through the park’s dense forests and green wetlands, past narrow and deep lakes, over high cliffs and through a few gorges. The natural beauty and above all the magnificent view from the cliffs have fascinated visitors for centuries, many artists have come her to let themselves be inspired.

From the starting point at the car park, a 300-metre long gravel path leads into the forest before the actual hiking trails begin.

Although the national park is very well known and popular, even on beautiful summer days you can enjoy peace and quiet here. Finland has only 5.5 million inhabitants, only few tourists come to Tampere, and the Helvetinjaerven National Park is located another one and a half hours north by car. 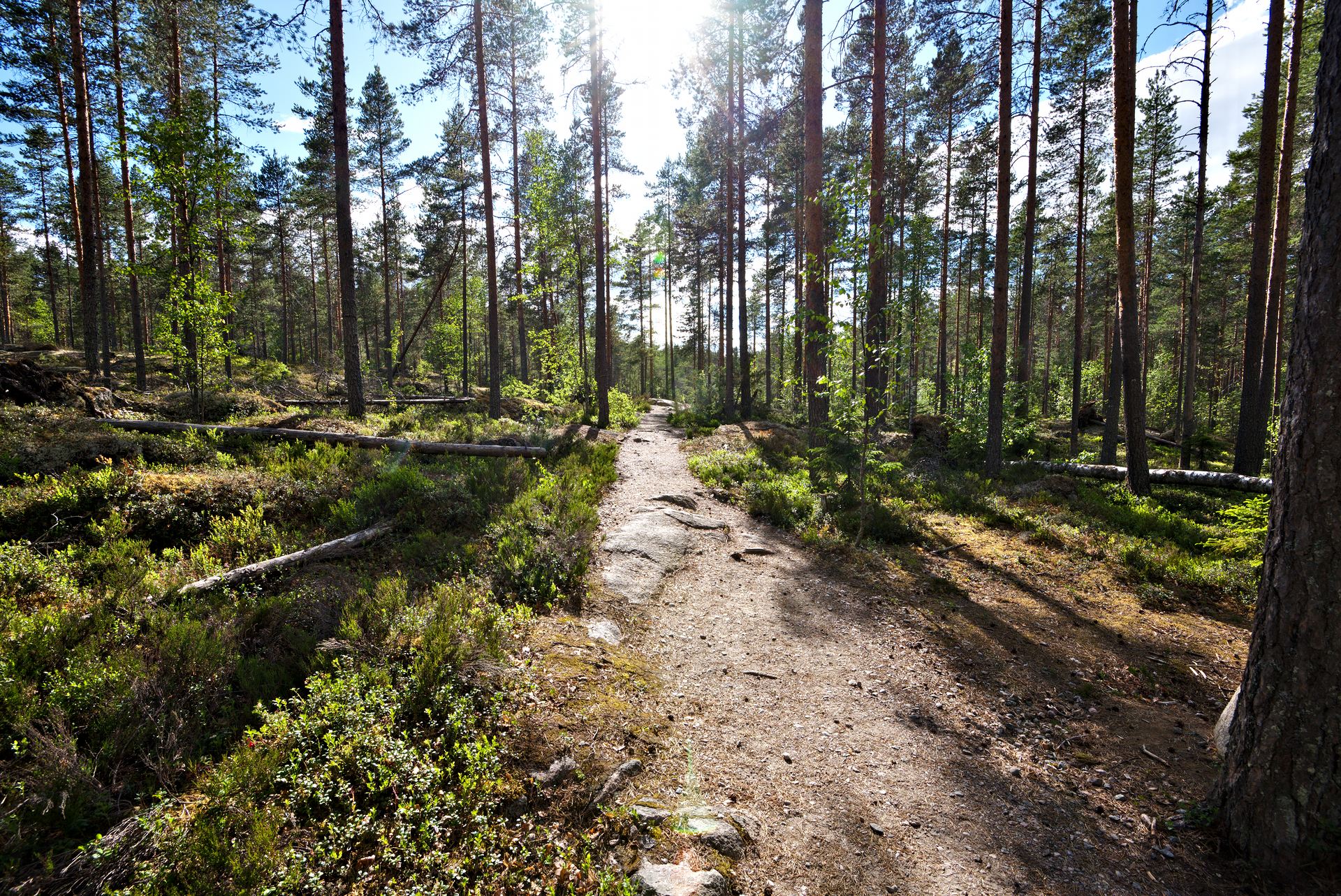 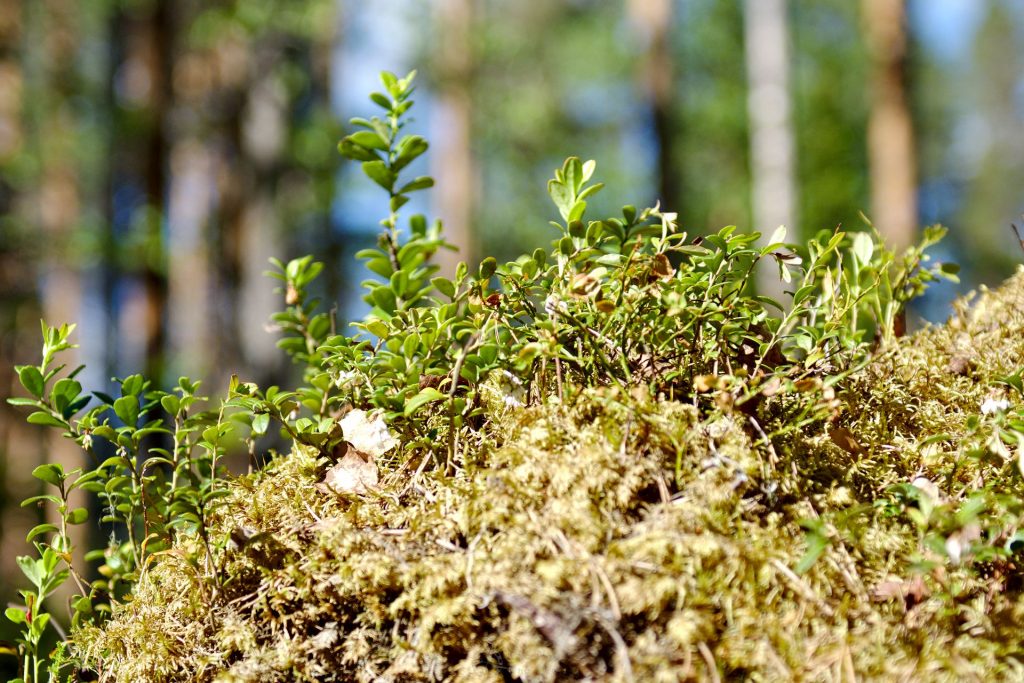 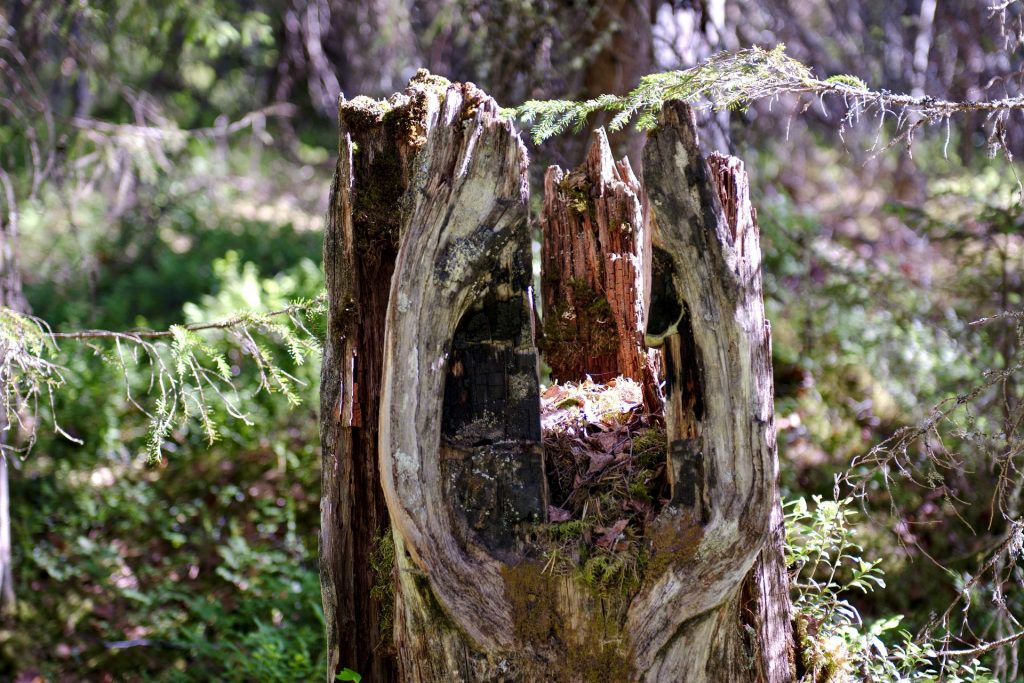 The first two kilometres take you through the original coniferous forest typical of Finland. Red and green shades dominate the picture. The land is wild and hilly, but Metsähallitus, the state operator of Finland’s national parks, has taken good precautions. The paths are in good shape, wooden stairs lead over the few gradients. 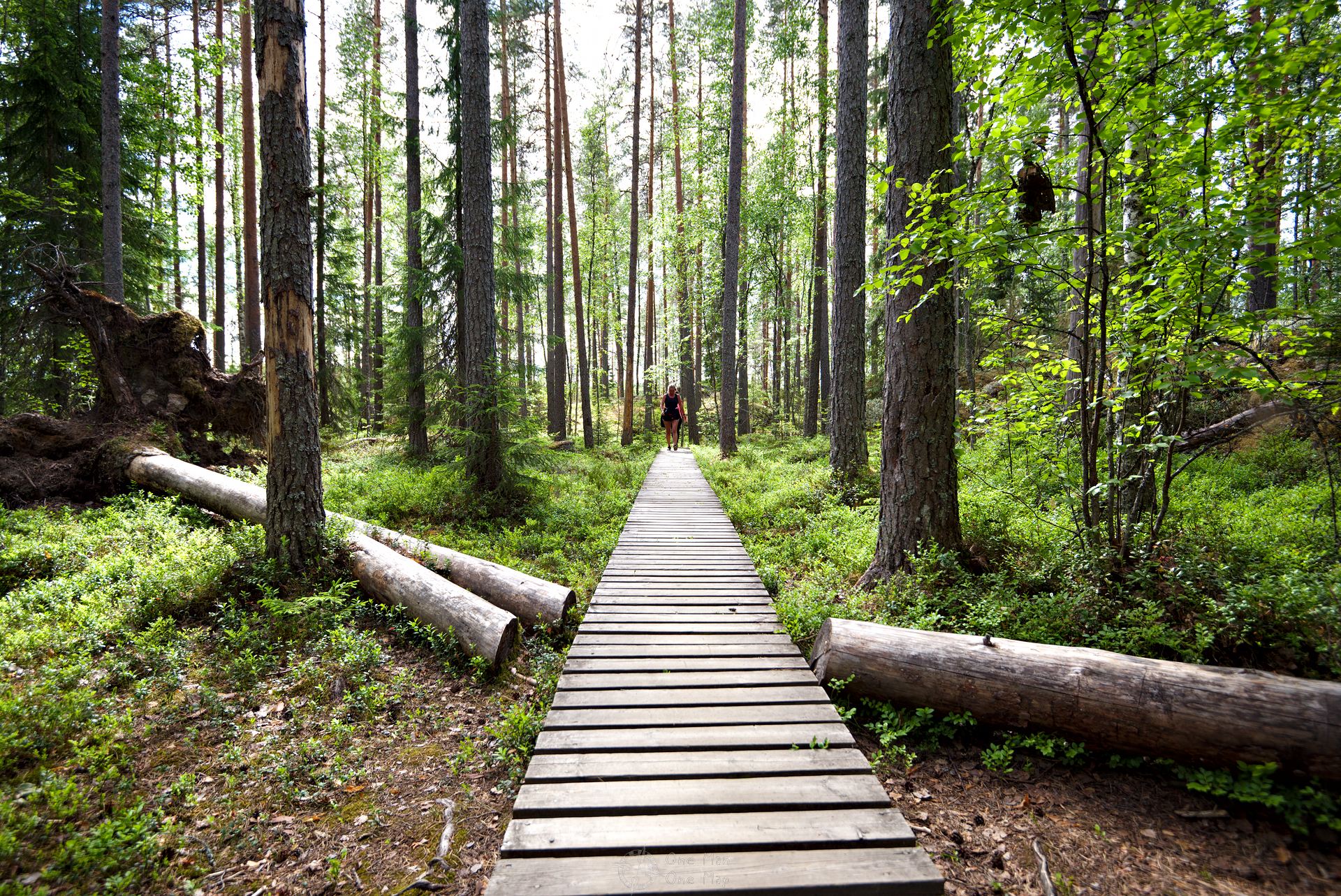 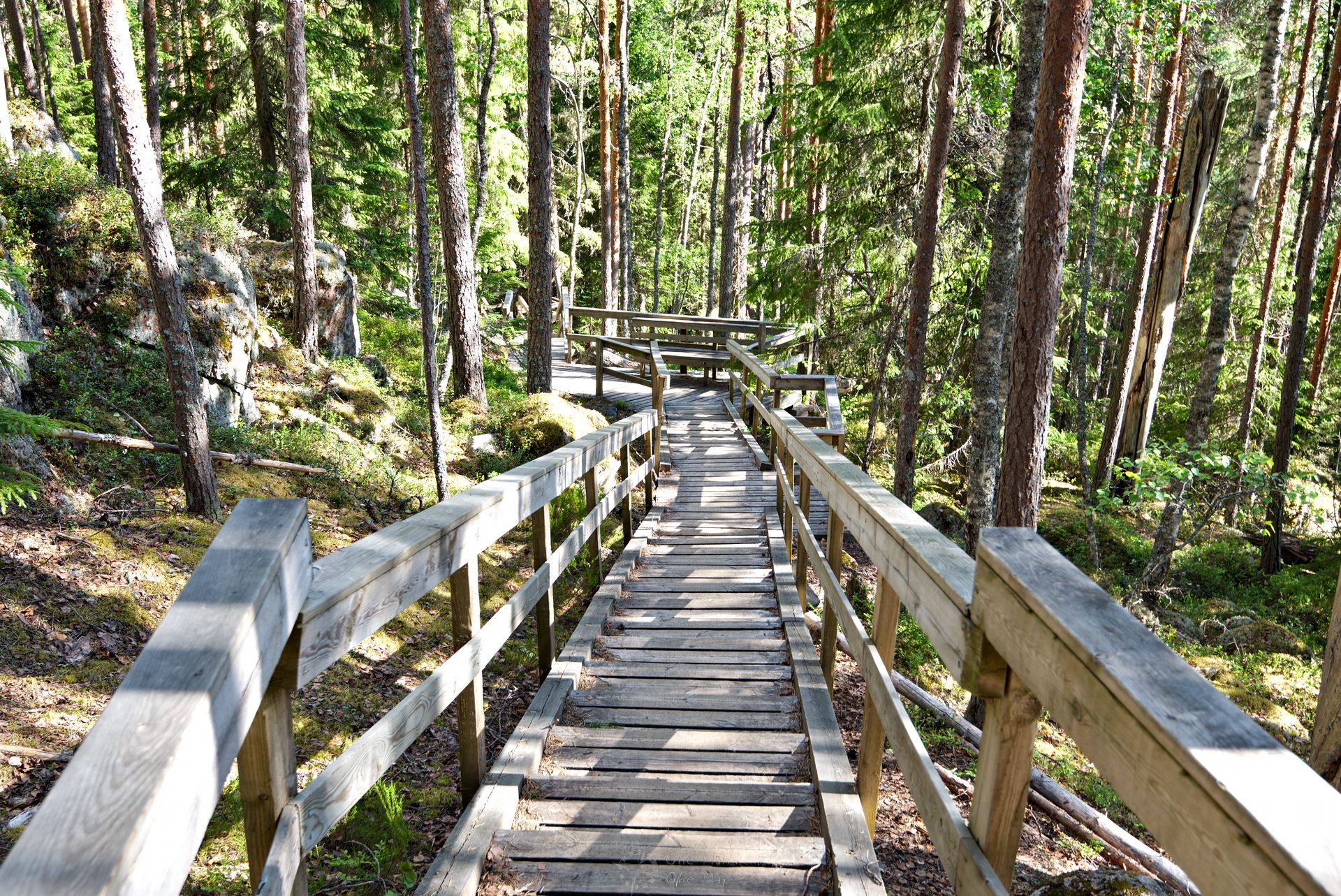 After about two kilometres you reach the cliffs above Helvetinkolu Gorge. From here you have a good view over Iso Helvetinjaervi and the rugged, barren landscape. It was formed by the glaciers that covered all of present-day Finland until about 10,000 years ago.

The meltwater later transformed the country even further. The entire Baltic Sea, for example, was a large meltwater lake that broke through to the North Sea about 7,000 years ago. 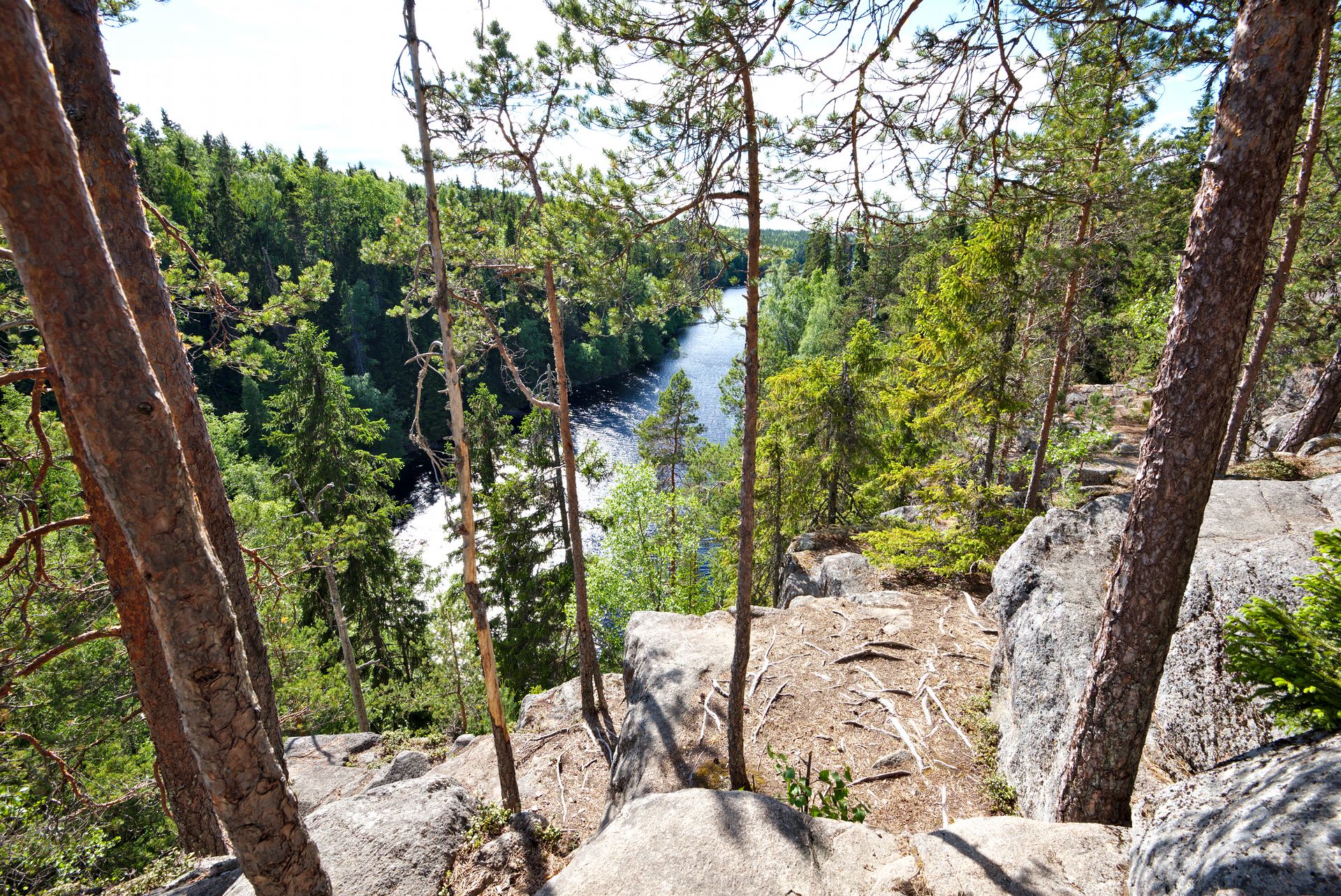 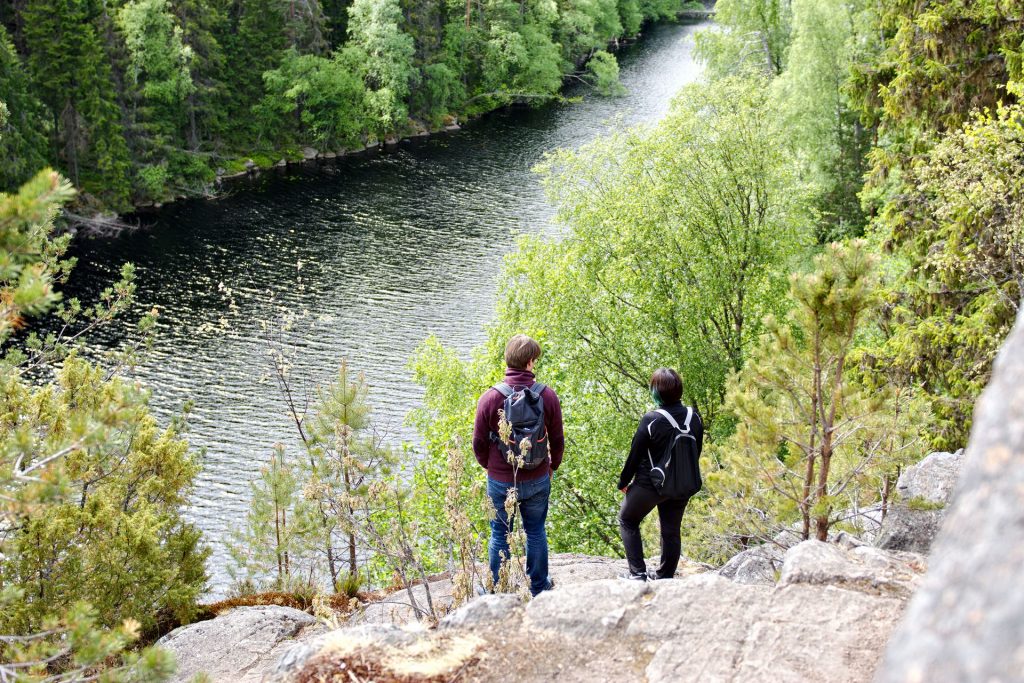 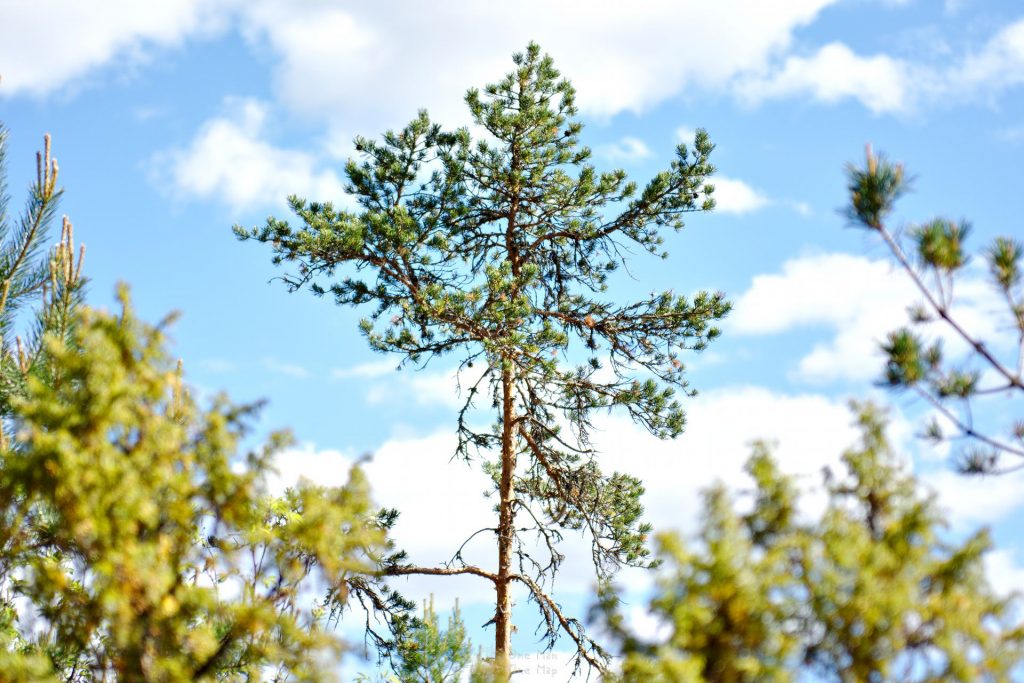 The gorge is located at the southern end of the lake. It is only about 40 meters long, but quite steep. Surefootedness is particularly important at the lower end.

Helvtinkolu used to serve, among other things, as a trap for wolf hunting. Young people gathered here on weekends to test their courage by jumping over the gorge, which in some places is only two metres wide. 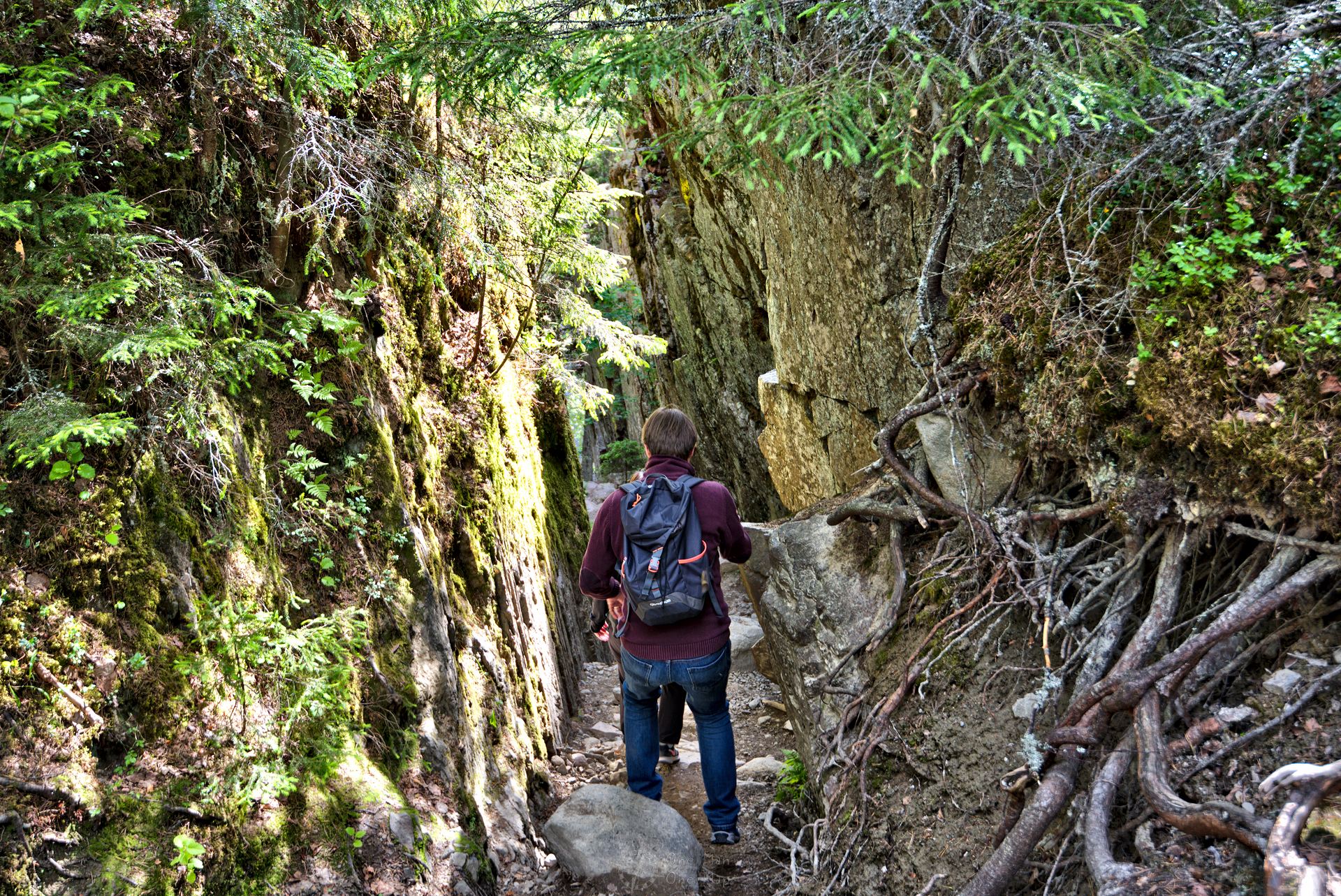 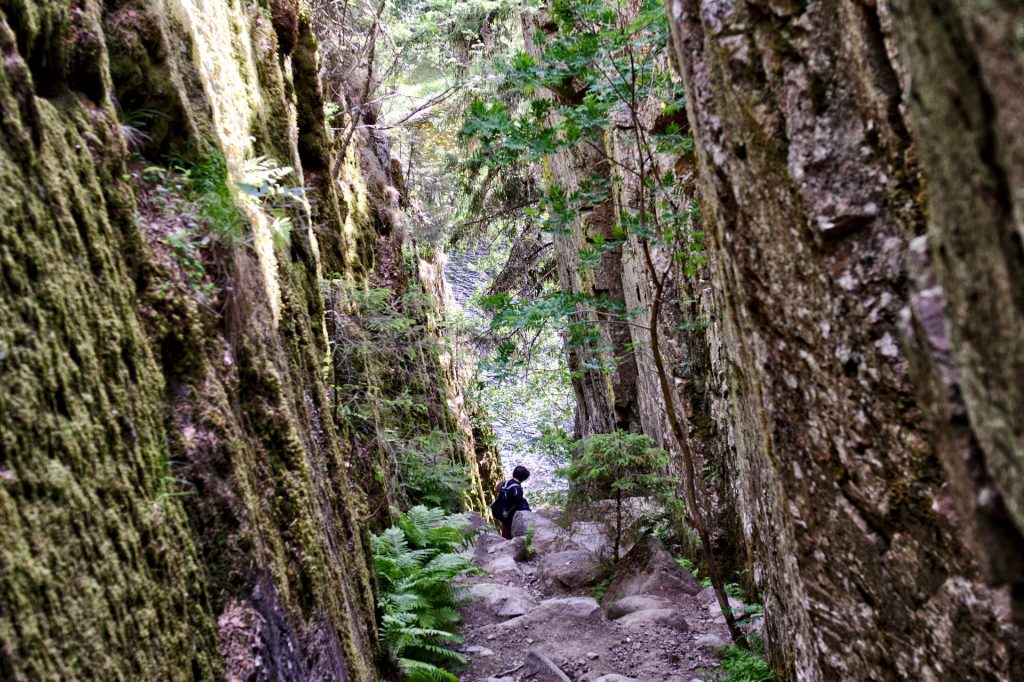 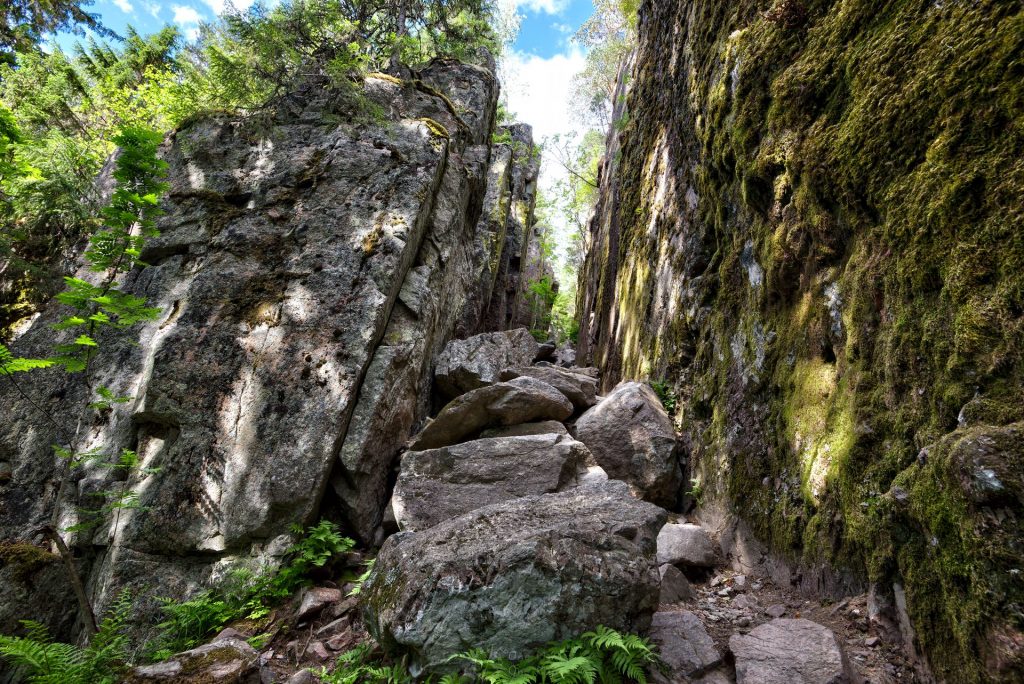 If you don’t feel like going through Helvetinkolu itself, you can cross it using a bridge instead and then walk down the paths and stairs to the lake. 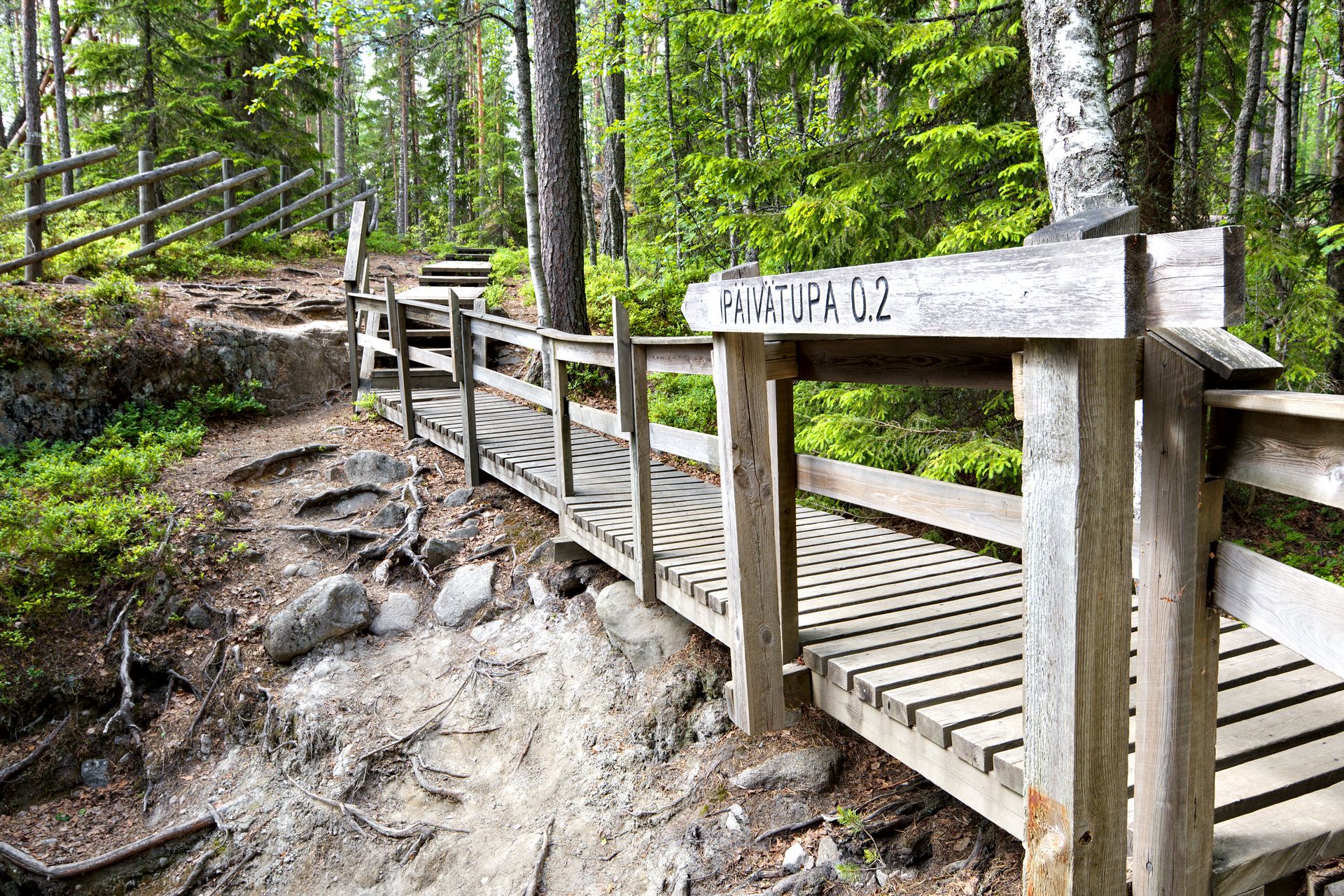 Arrived at the bottom, one first reaches a small day hut equipped with a wood stove, benches and tables. It dates back to the 1920s and is thus almost 100 years old. The Finnish painter, architect and designer Akseli Gallen-Kallela is said to have come here. 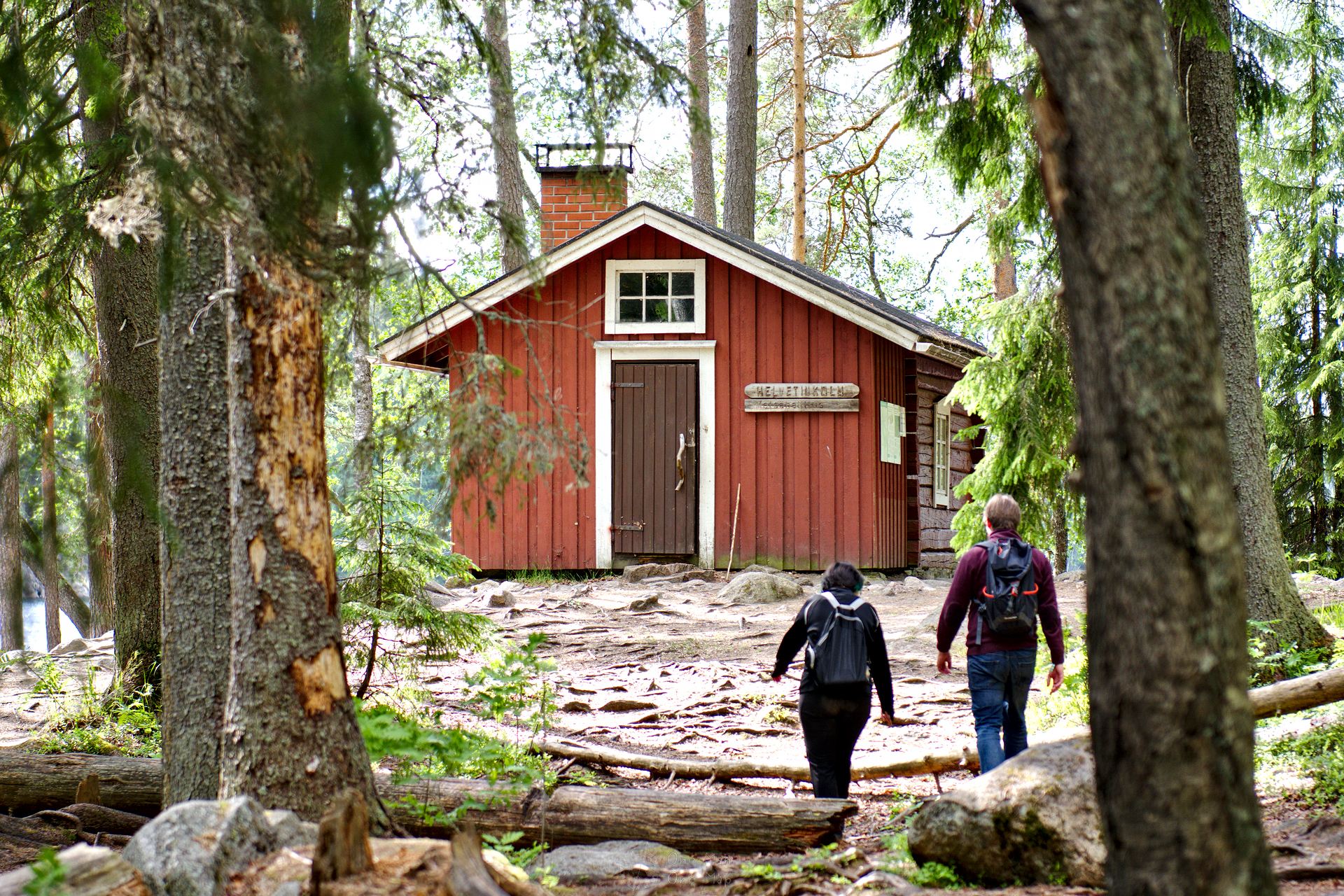 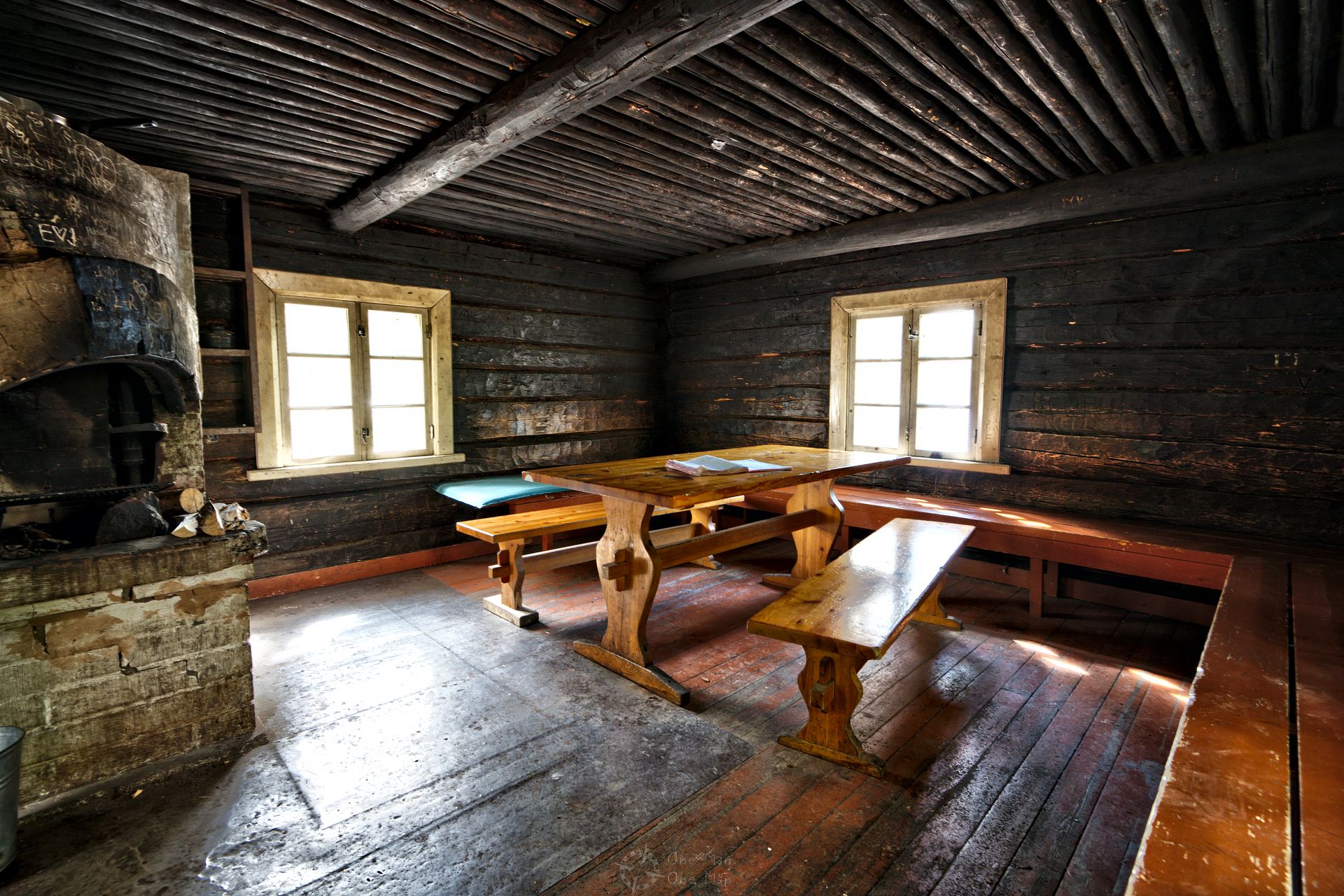 Directly in front of the hut lies Iso Helvetinjärvi, which is only 30 metres deep and not more than 350 metres wide but three kilometres long. There are many other lakes in the vicinity, including Haukkajärvi with its famous red sand beach about one and a half kilometres to the south. 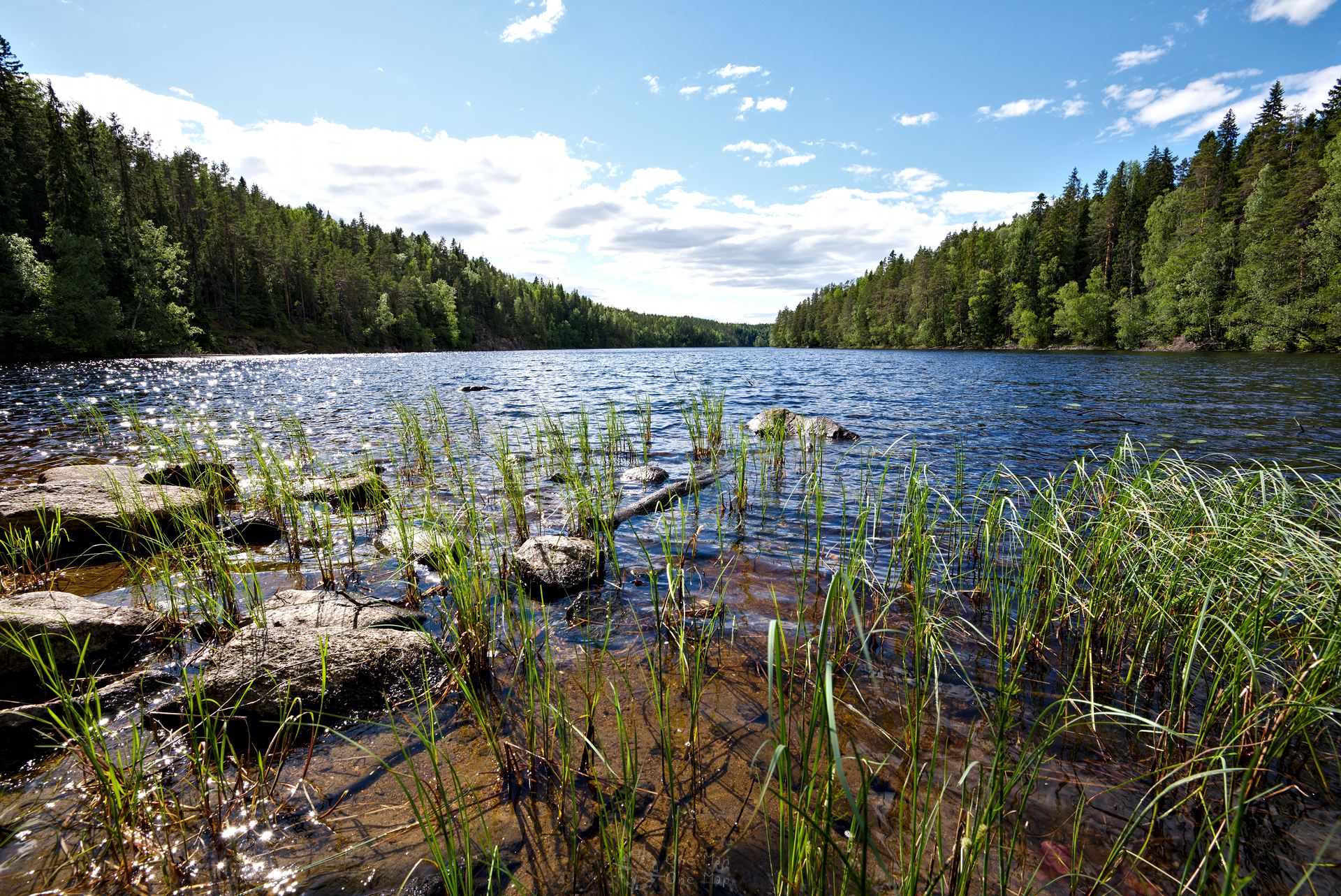 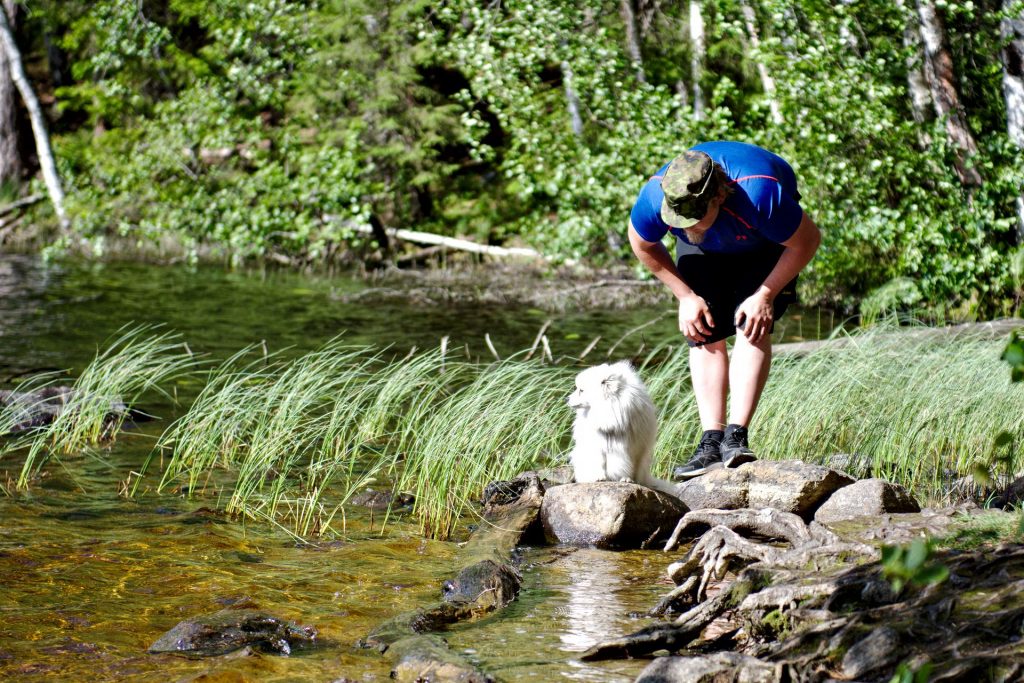 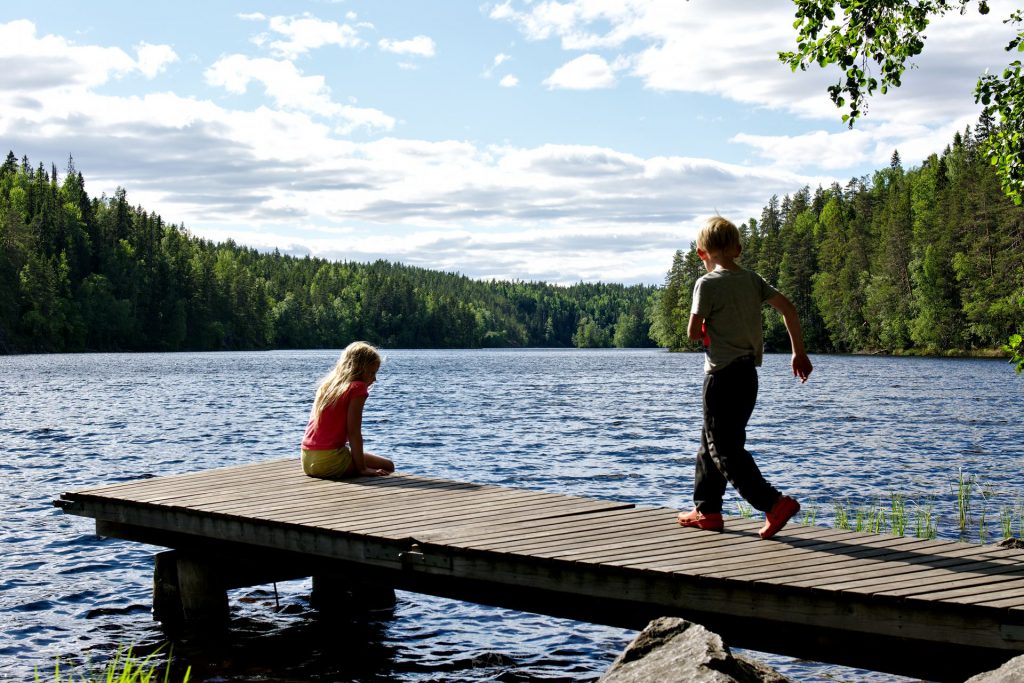 The way back leads either thought Helvetinkolu or the stairs and paths again. If you don’t want to return to the parking lot yet, you can walk the 1,000 kilometres to Kilpisjärvi in Lapland or the 5,000 kilometres to Alexandroupolis in Turkey on the European long-distance hiking trail E6 😉 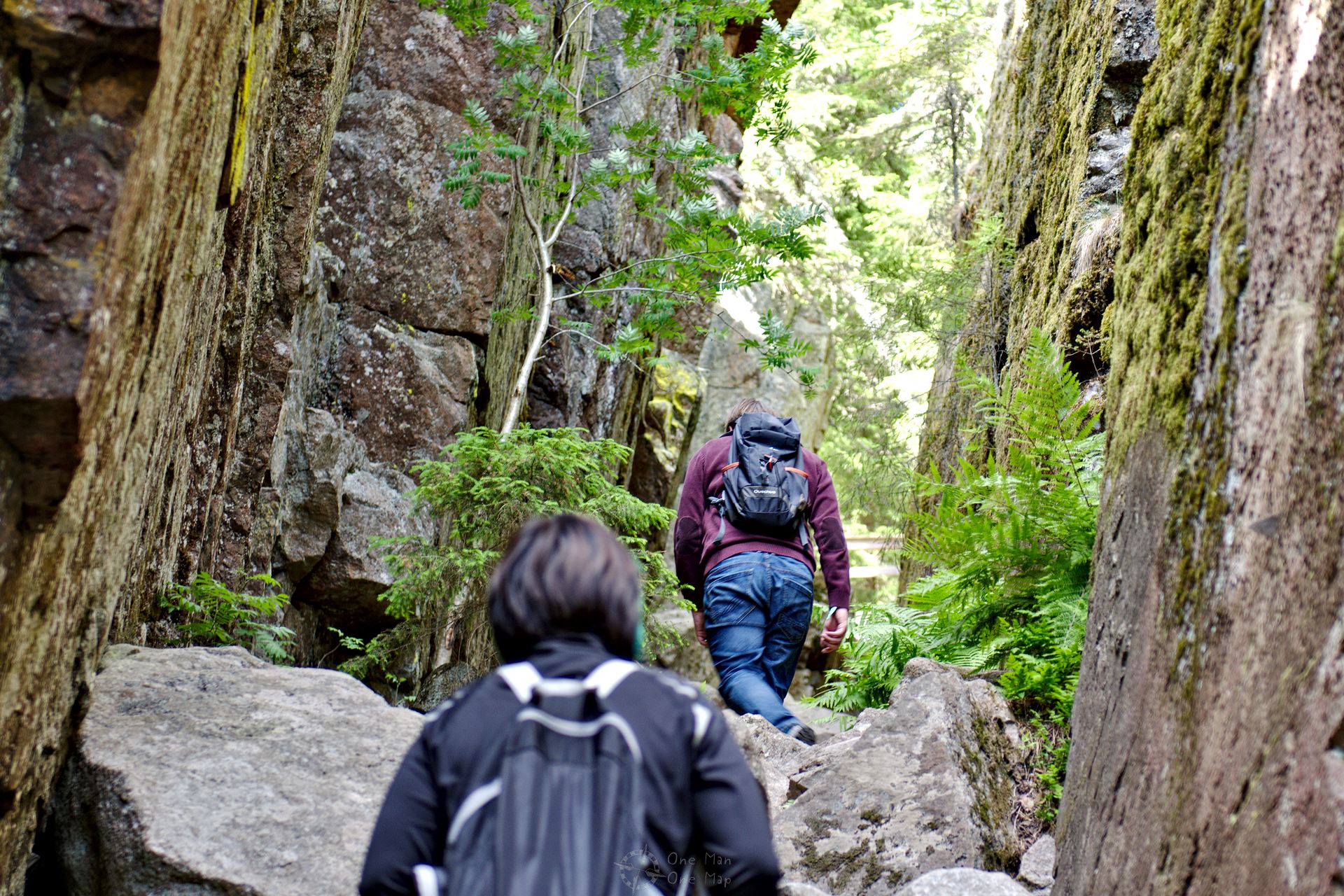 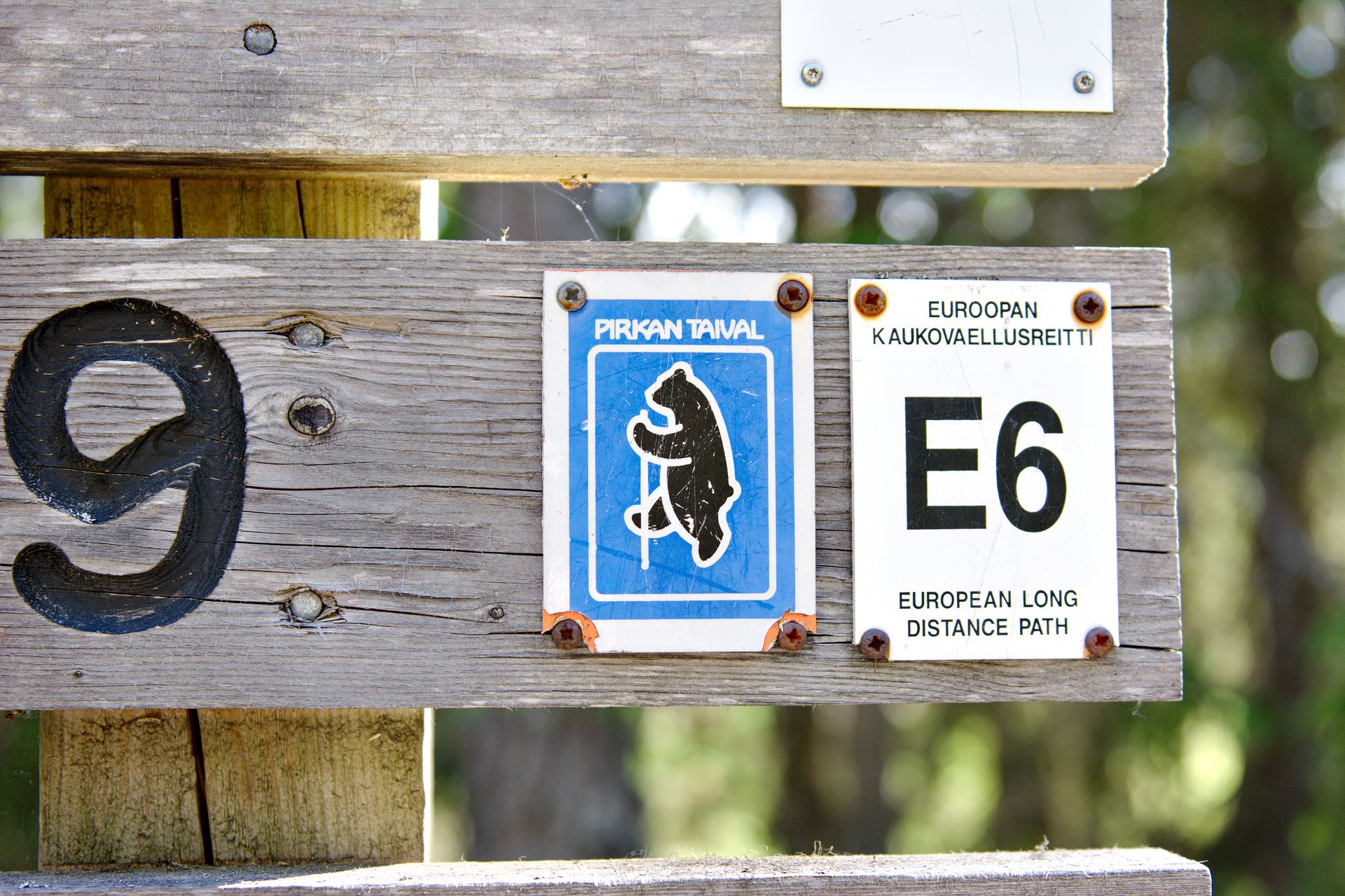 Fourth stage: Through the wetlands

Wetlands are very typical of the Finnish landscape. Earth-filled, shallow depressions that have been cut into the rock are regularly or even permanently flooded by groundwater or rain. Depending on the location, it is difficult to distinguish a wet meadow from a swamp, and a wrong step often ends with at least one wet shoe. It is therefore better to stay on the paved paths 😉 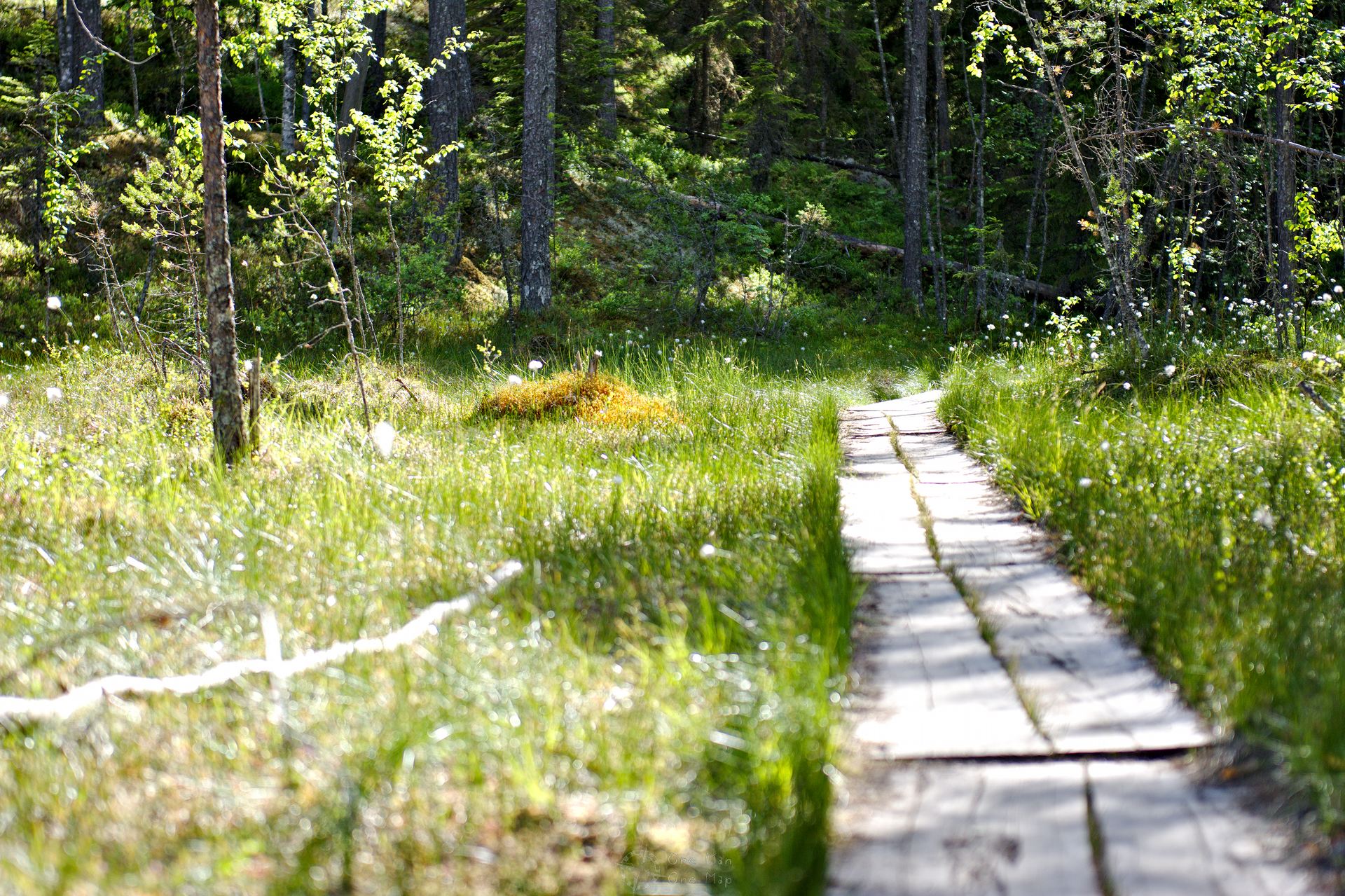 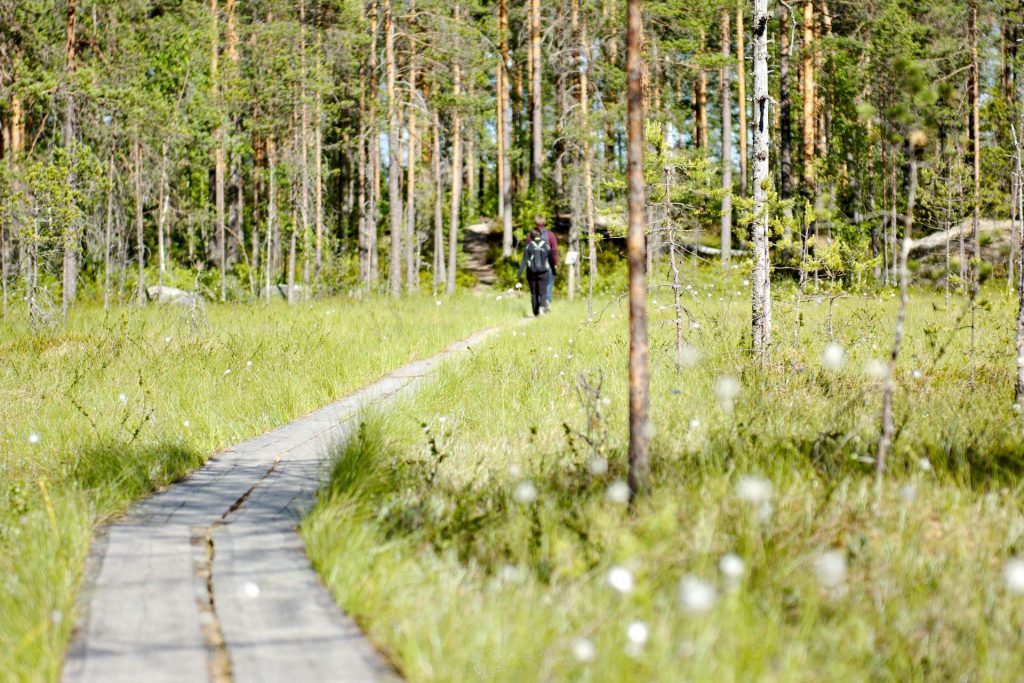 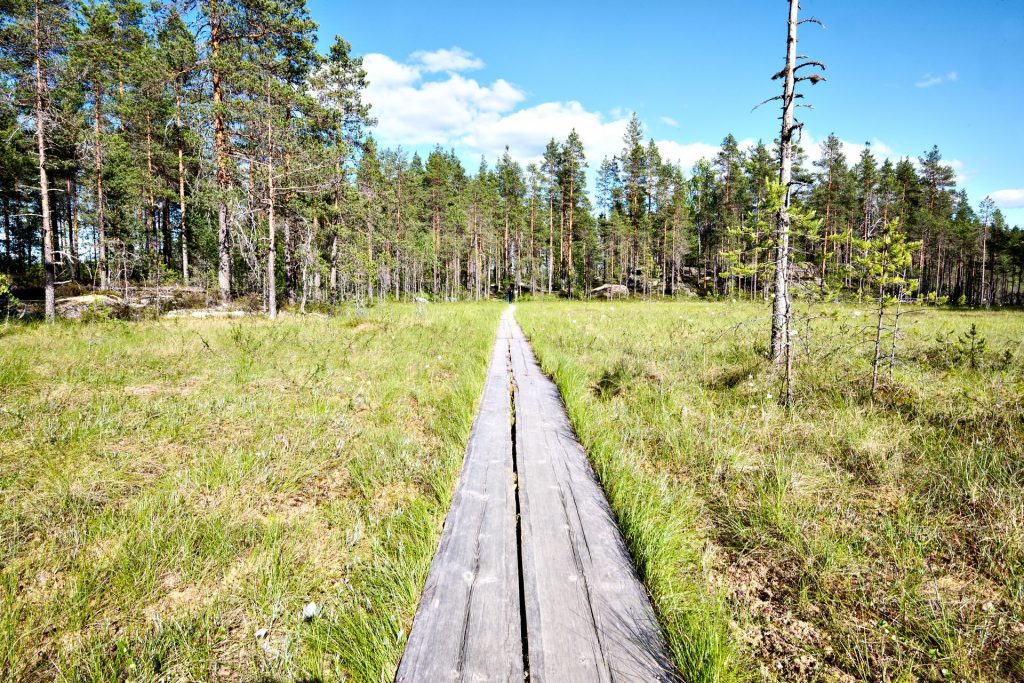 Trees usually cannot root in the wet meadows, but grass, rushes, sedges, mosses and ferns defy the high humidity. Birds, insects and amphibians like to stay here. Bears are also often seen here, which our companion could only confirm. 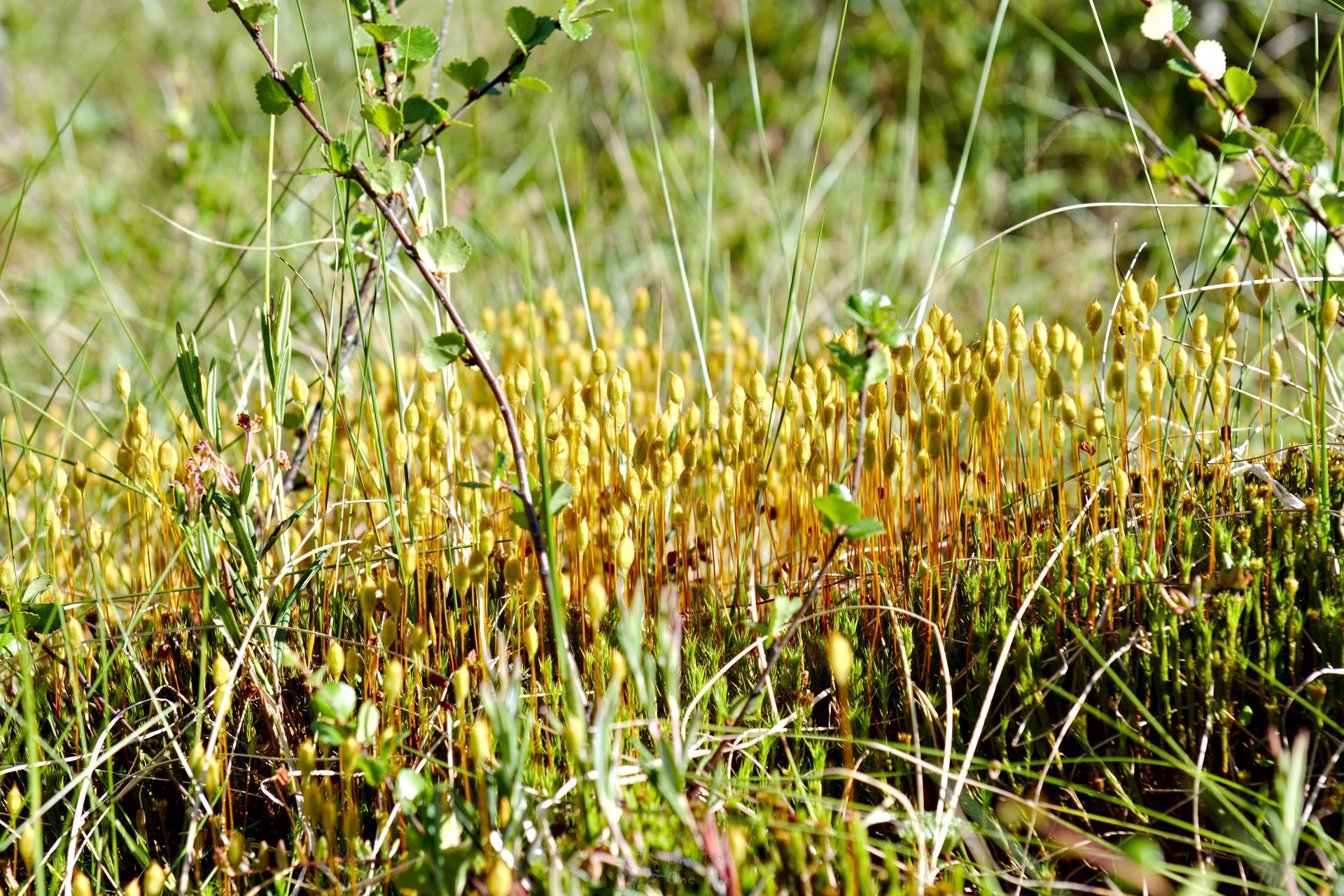 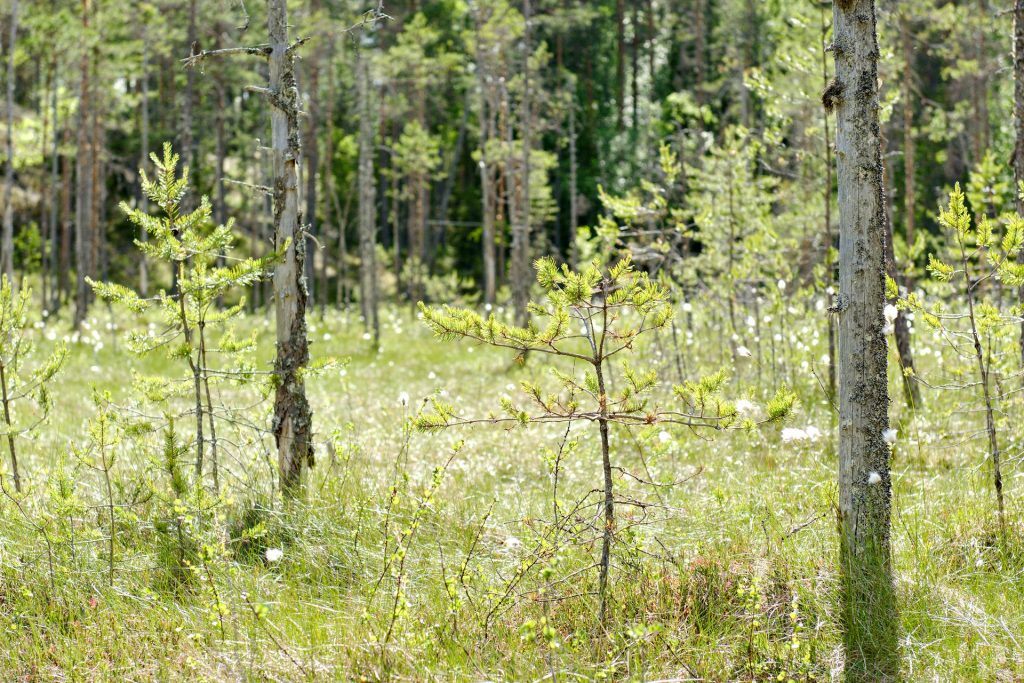 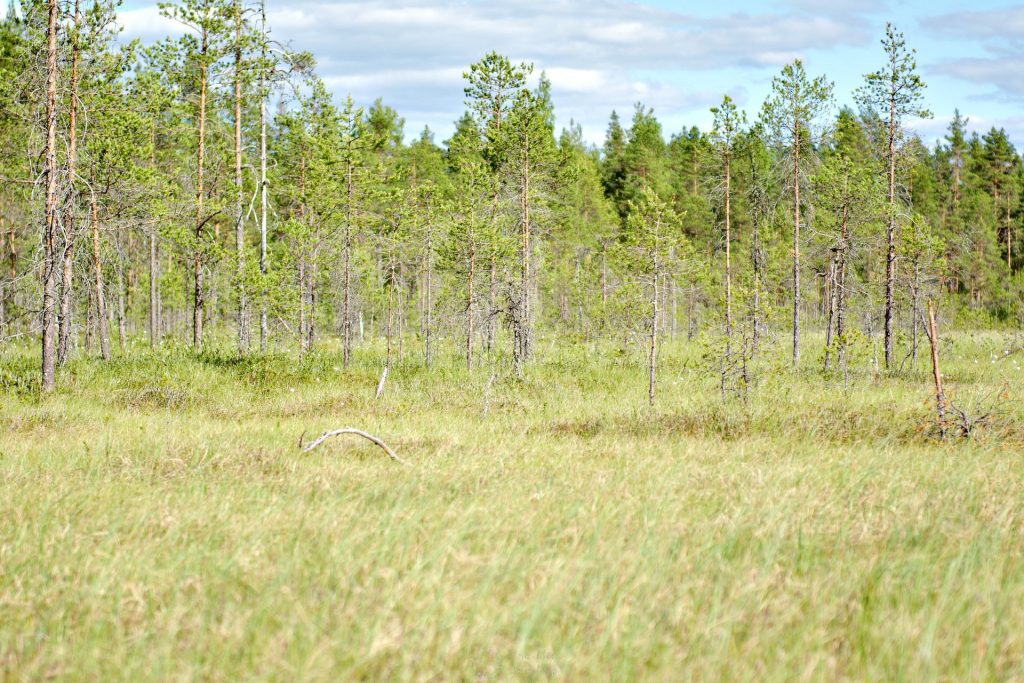 A truly beautiful and short hike for a summer or autumn day. You can find more hiking tours in the corresponding category 🙂